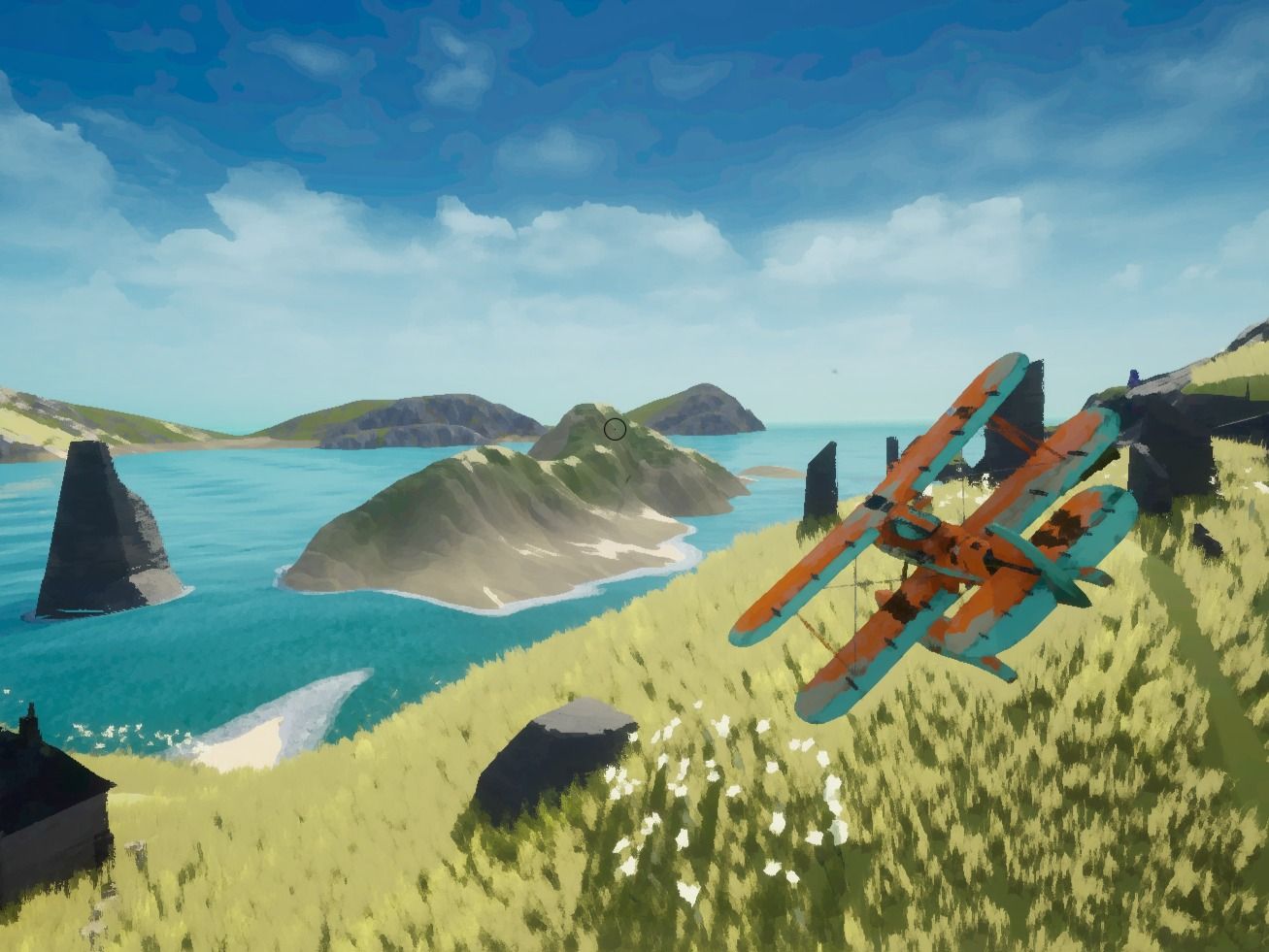 SKYE is a flight game in which you explore a painterly world inspired by the Scottish Hebrides. It is developed by a team of 3rd-year students at Breda University of Applied sciences (formerly known as NHTV).

Explore the land in your trusty seaplane

In SKYE you fly around a painterly island group inspired by the Scottish Hebrides. You can land your seaplane anywhere on the water. The surrounding environment allows you to maneuver through rock arches and pass through rock formations. Visit the local port to pick up quests or simply relax and enjoy the scenery! 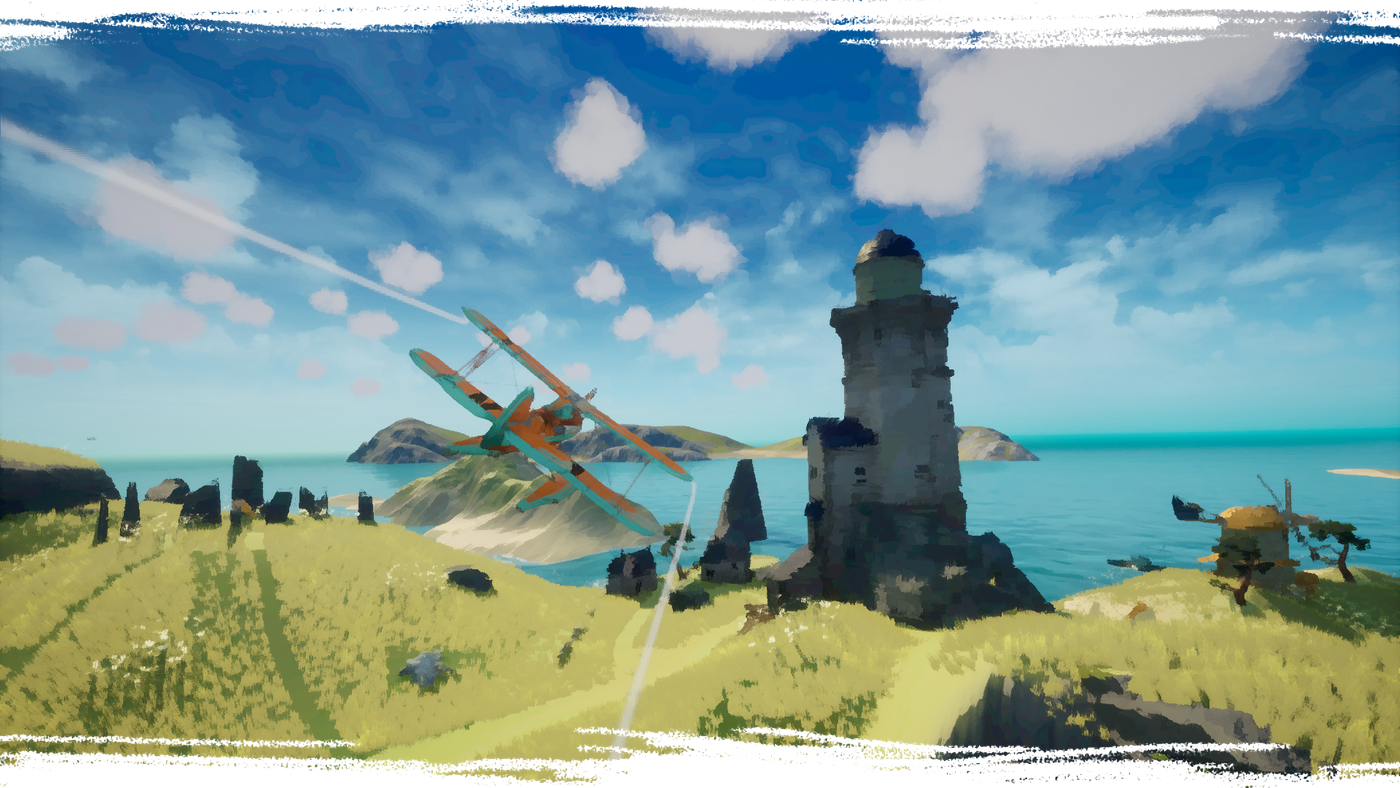 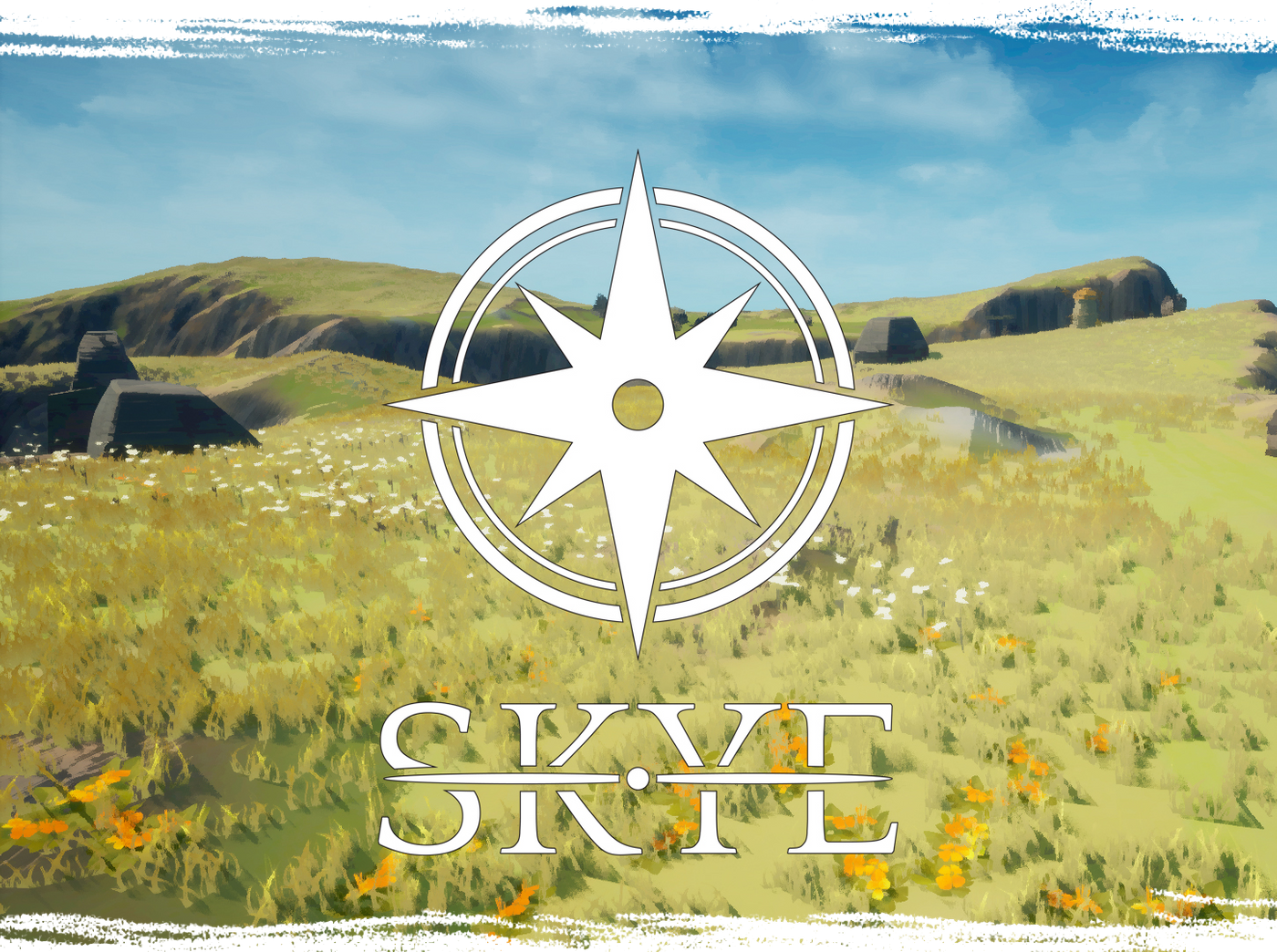 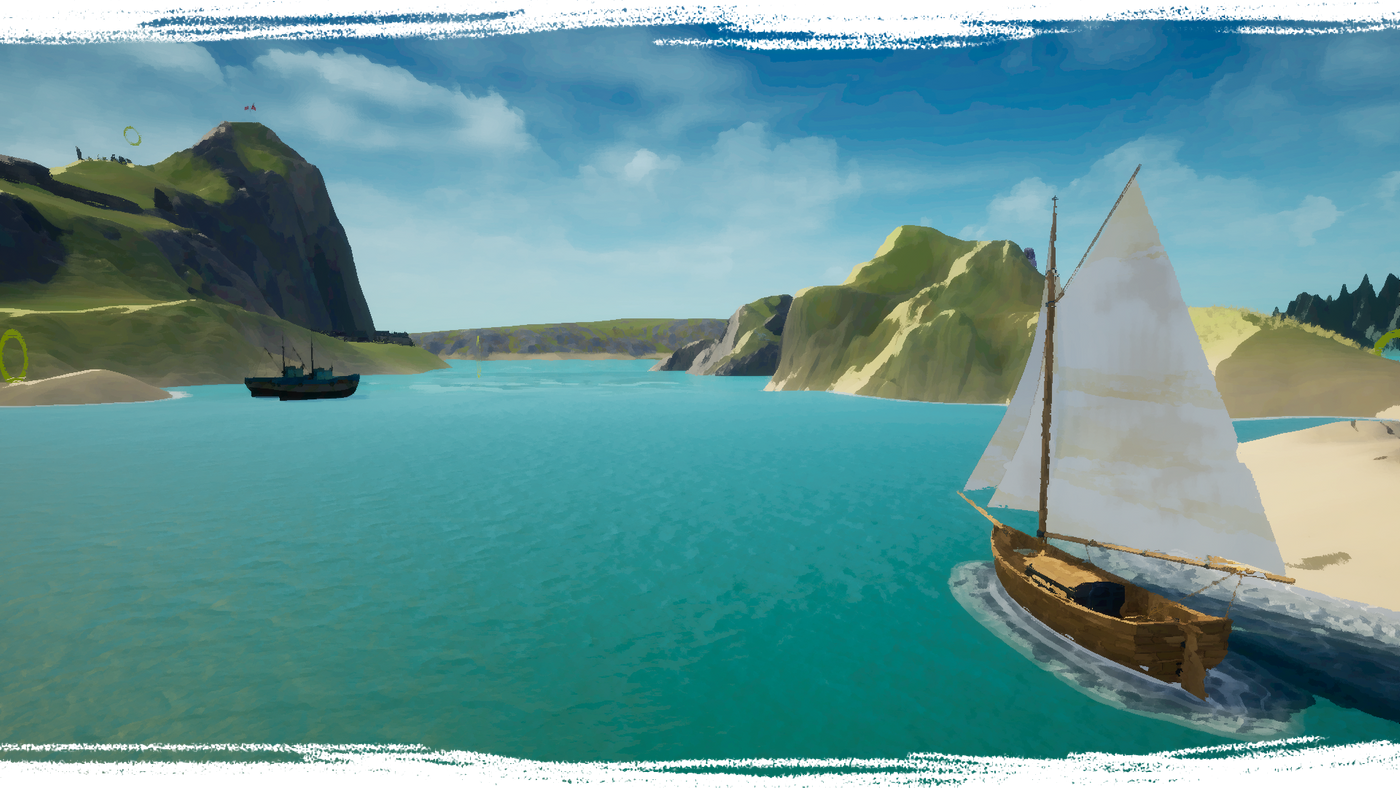 SKYE is created by 3rd-year students at Breda University of Applied Sciences in the Netherlands (formerly known as NHTV). This was the first project we worked on for an entire academic year, with a relatively large group of people.

At the beginning of the academic year, our team signed up to work on the creative brief that resulted in this game. In short, the brief was as follows:
Create a living, open world flying game, set in 1930's Hebrides (Scotland), inspired by 1930's seaplane technology, rendered in a non-photorealistic style.

What followed was a fun and challenging creative journey. We researched and discussed art styles, gameplay, music, and anything else that is part of developing a game. (And as probably every game developer has experienced we over scoped incredibly). 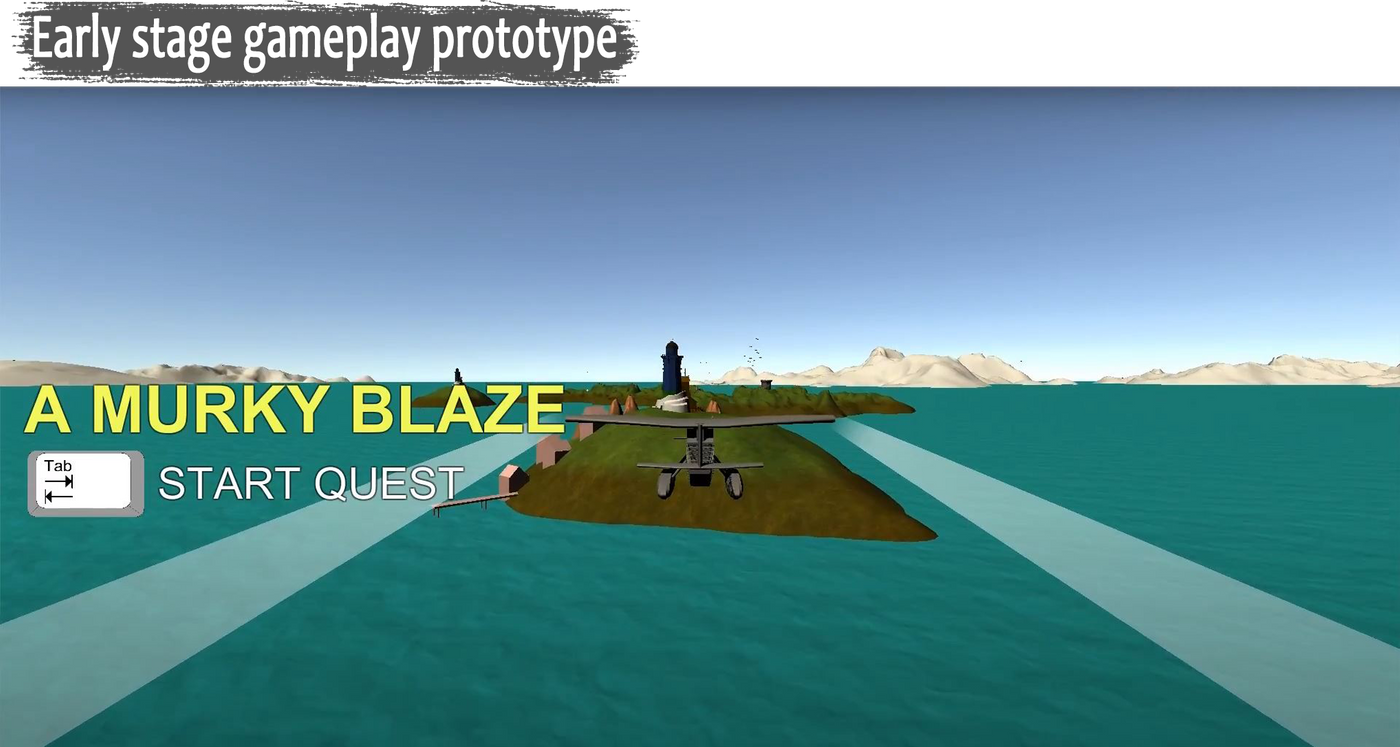 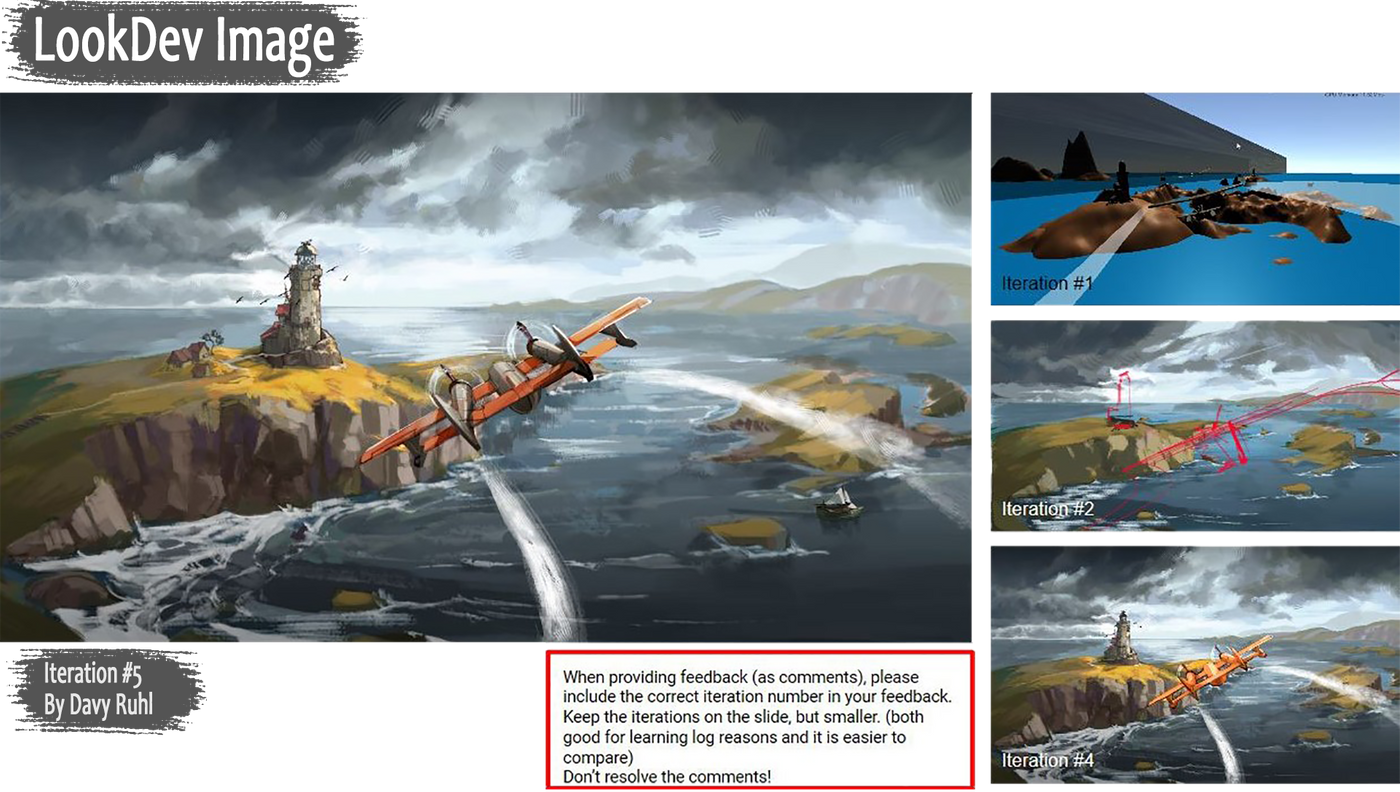 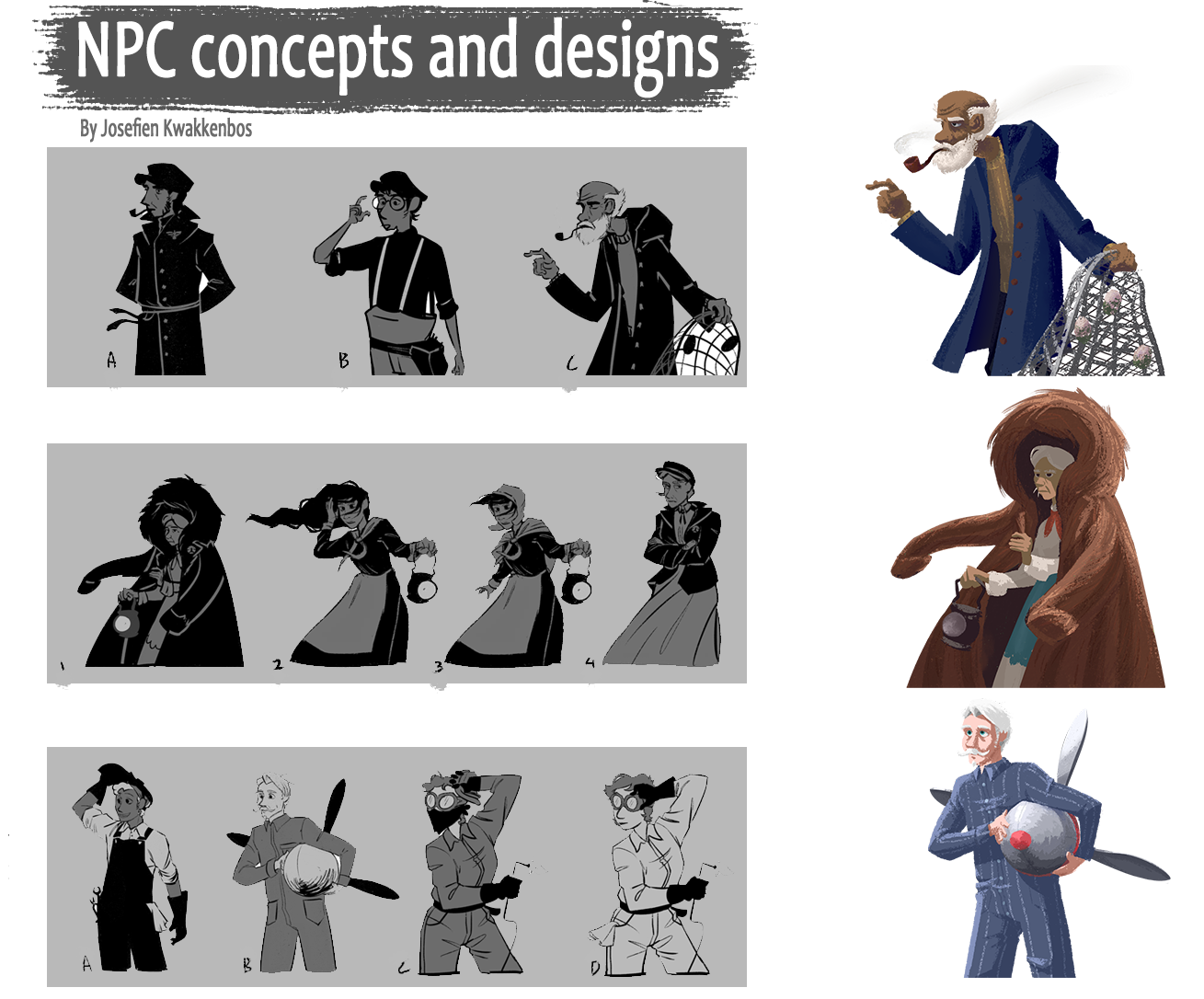 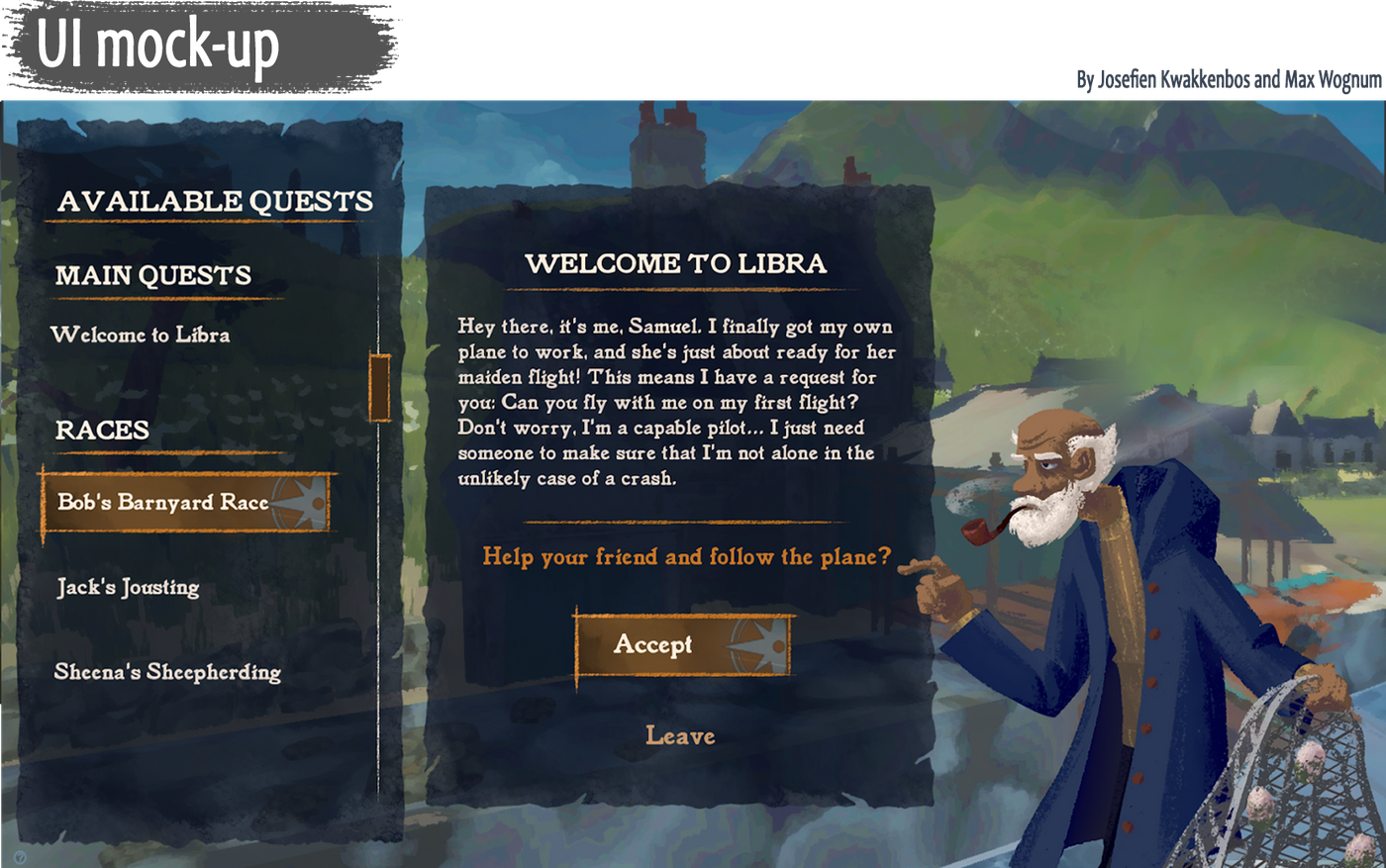 The quests in SKYE challenge you to guide ships, follow other seaplanes, run errands, or set the fastest time in racing. The NPC's in the game were created very early on in the process and stuck with us for the rest of the development cycle.

If you want to take a break from quests, the land invites you to explore on your own.

At the beginning of the development cycle, the plan for SKYE's gameplay was a lot more action-packed than it is now. However, while working on this project and getting feedback from playtesters, we realized that the ambiance and relaxing experience is one of our strongest points. This is our focus.

We quickly knew that we wanted to go for a painterly art style. But the next challenge was making this happen. 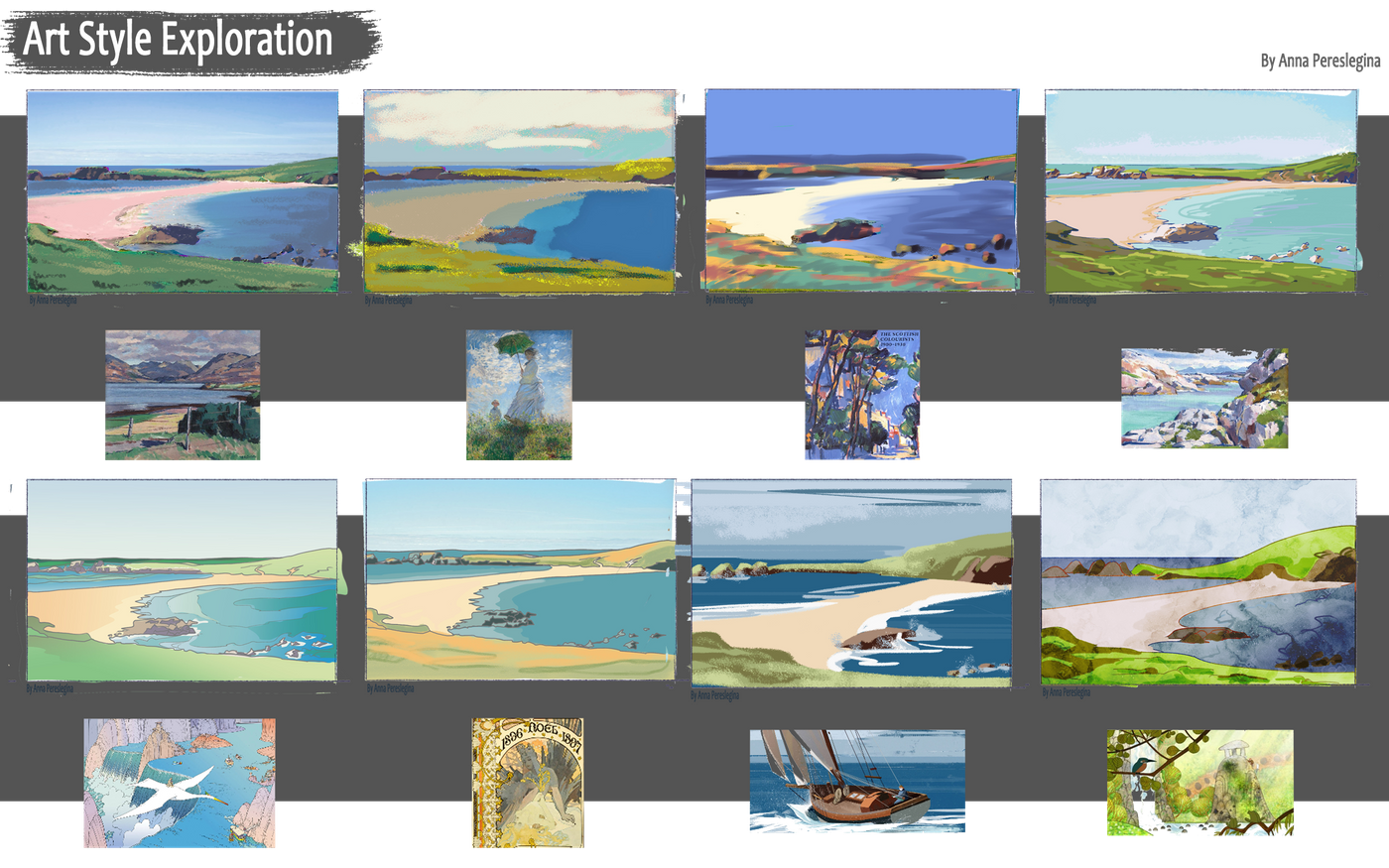 The custom post-process effect manipulates screenspace information in a world space manner. The scene is transformed into a painting while the form and shape of objects are kept when playing the game in motion.

Each object in the scene has its own unique post-process paint filter settings.  For example, buildings and large rock formations get a heavier paint-brush treatment, whereas foliage is set to remain more crisp. 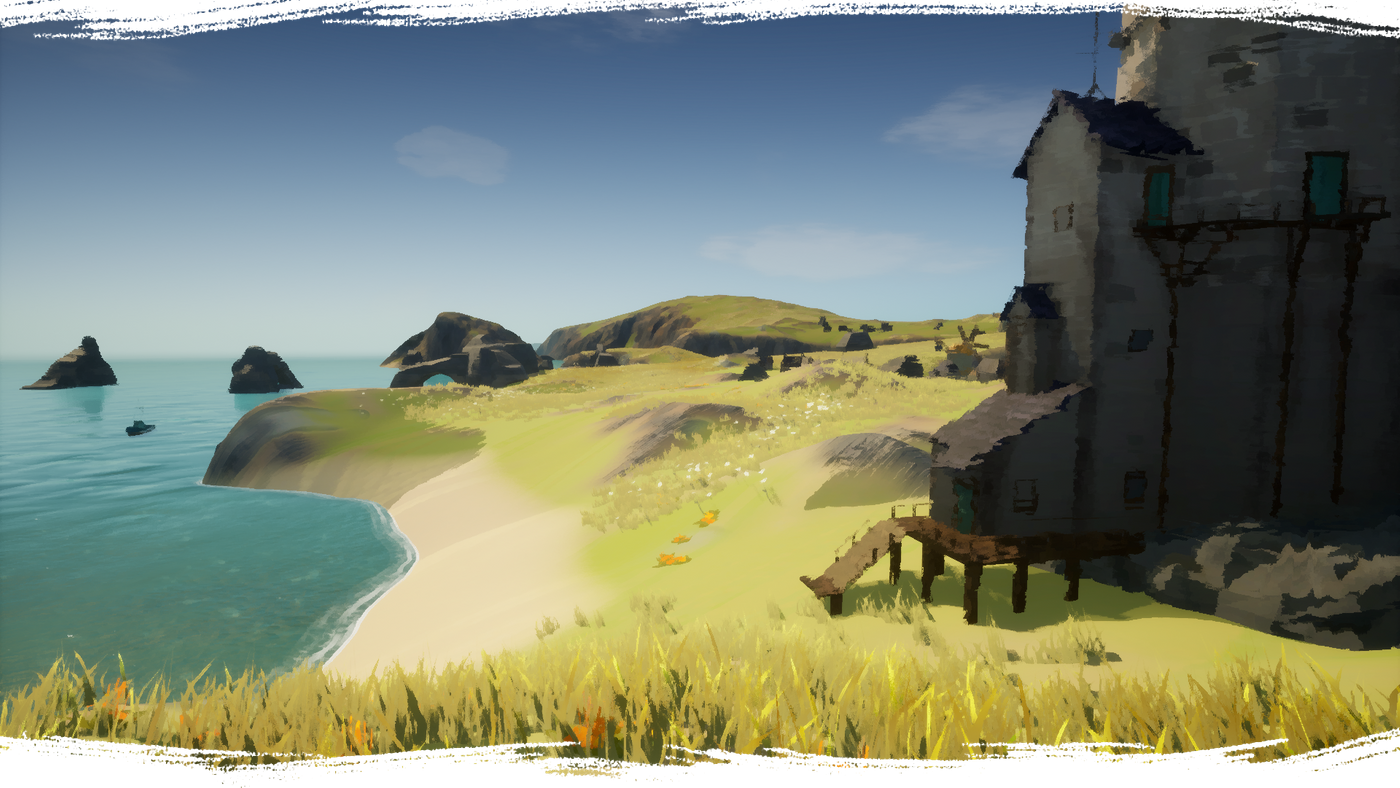 The way grass is visualized in some Japanese animation was an inspiration for the wind effect on the foliage in SKYE. An overlay texture gives the grass more color variation and different types of flowers add nice color details to the scene.

The water material is made with a combination of various different techniques.

In SKYE there is one main island where most of the gameplay moments occur. This island, along with the surrounding world, has gone through many different phases. 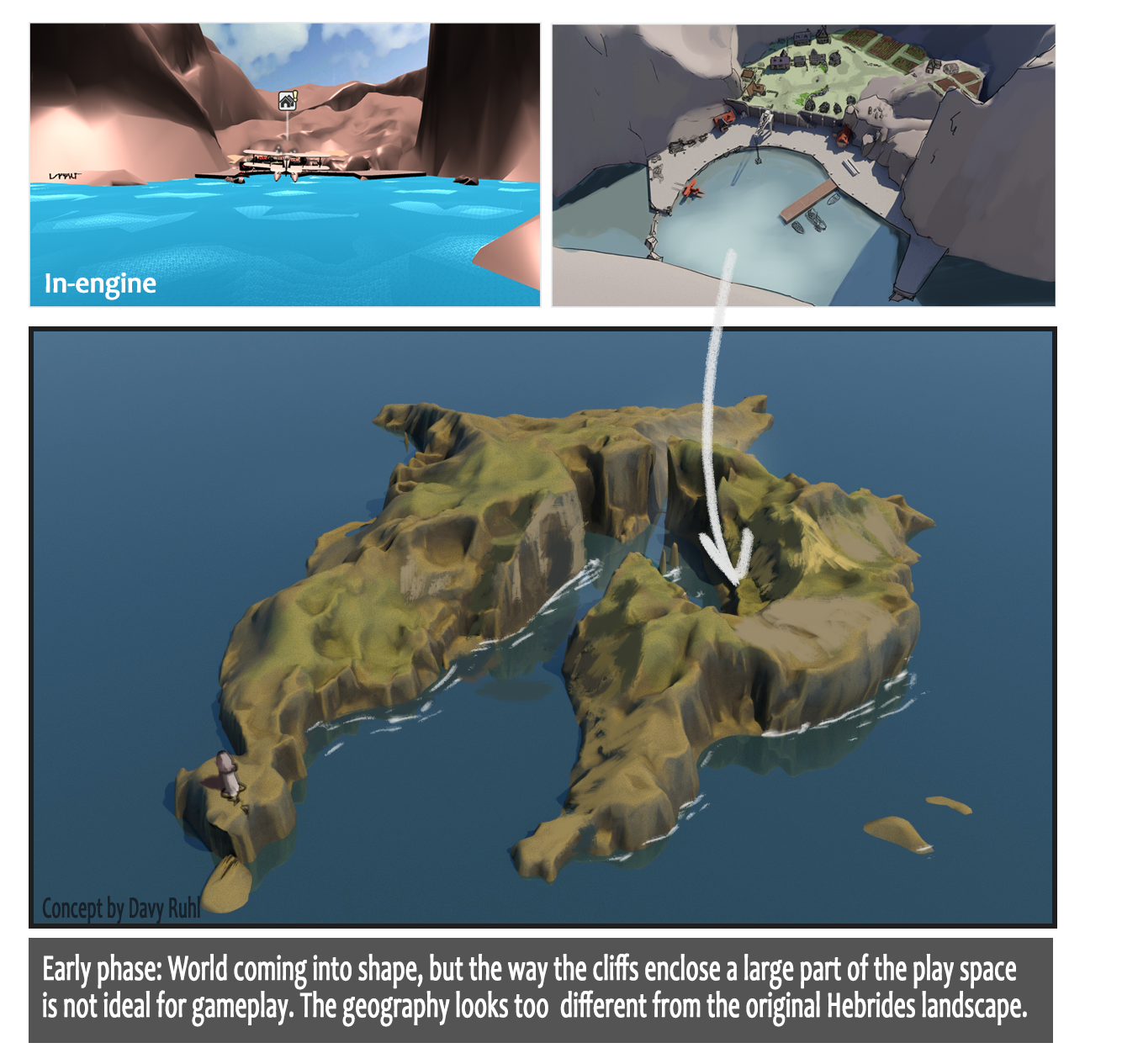 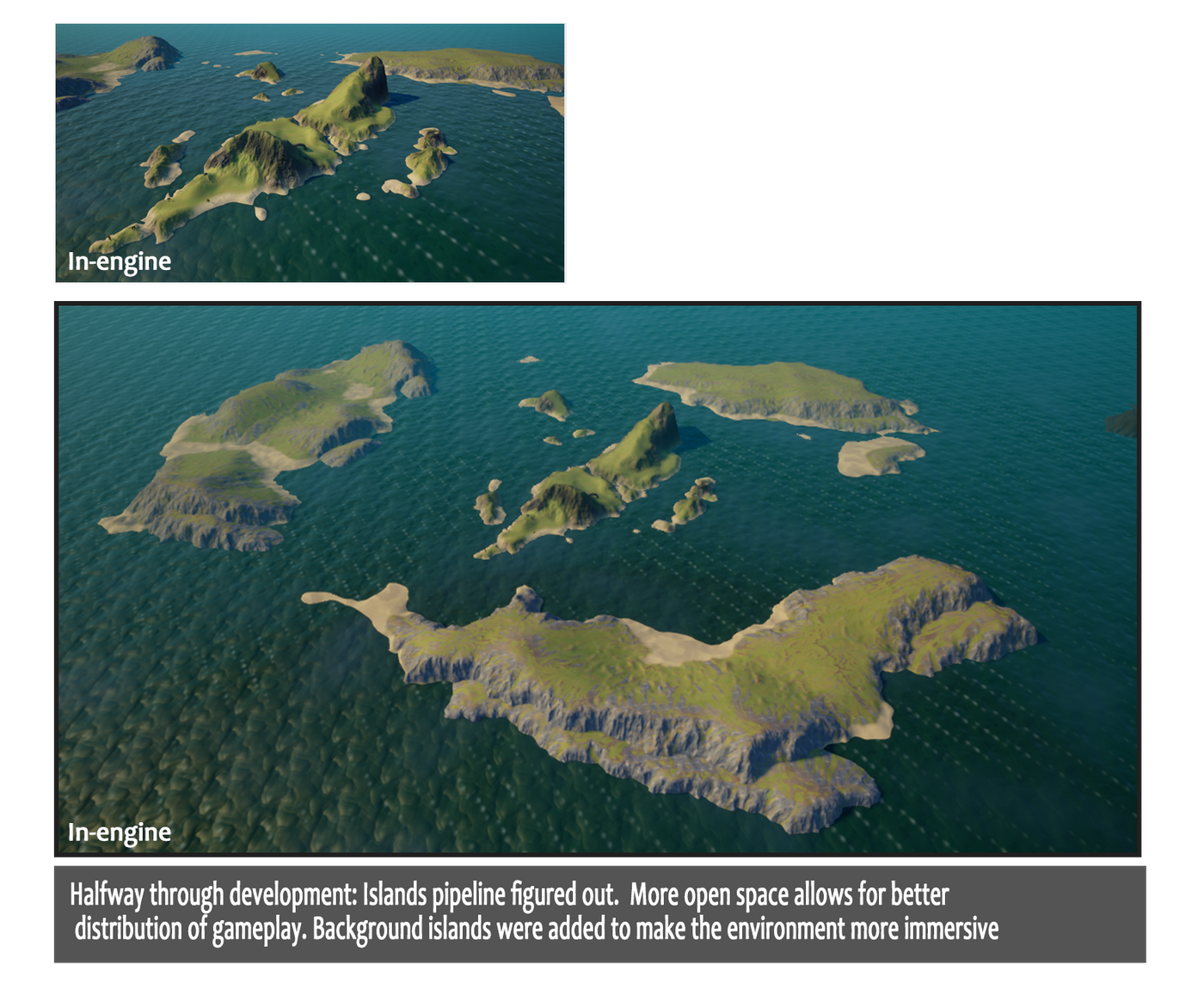 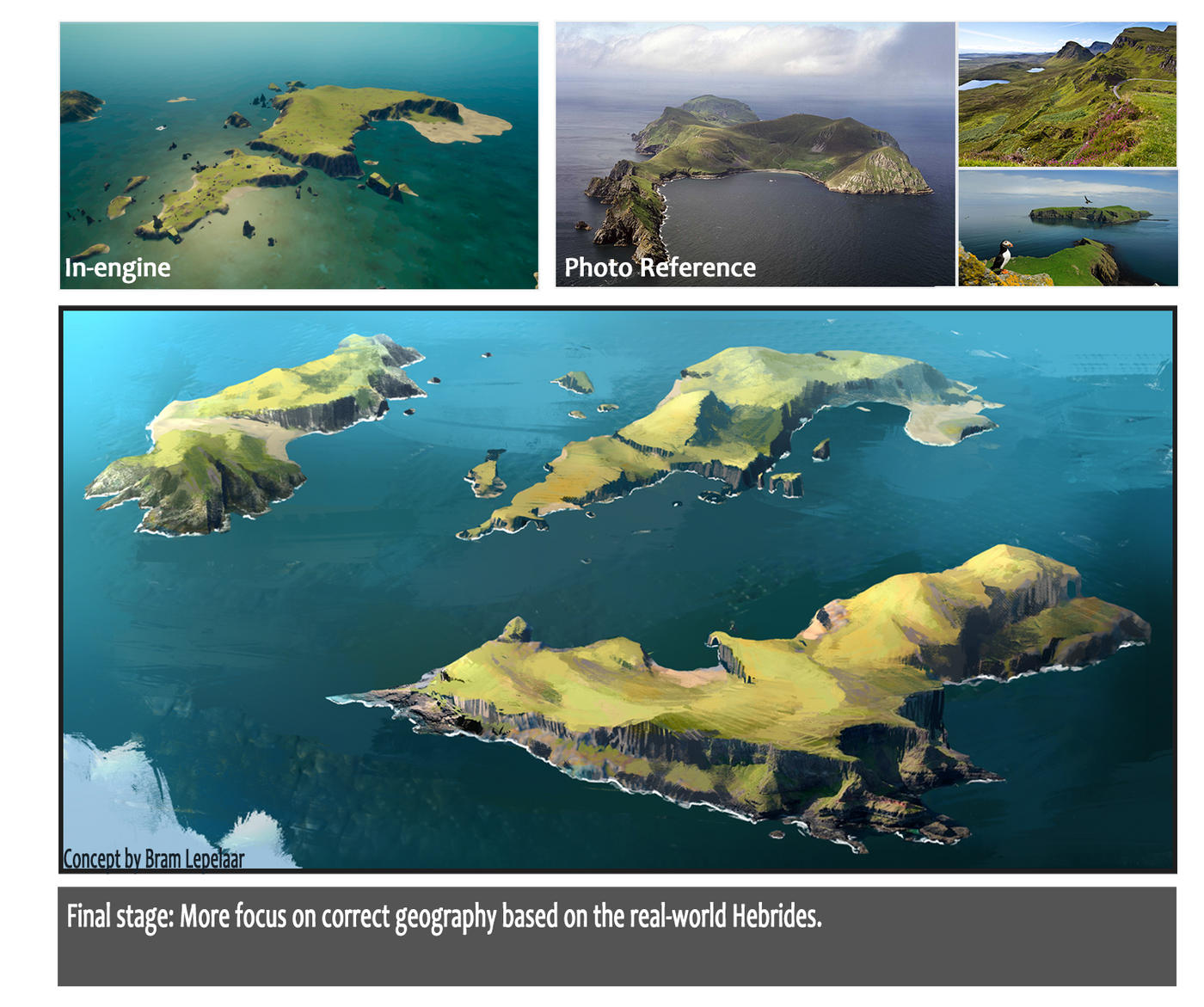 Within our school environment, we had the option to outsource tasks to other 3rd-year student teams specialized in concepting and tech. We happily made use of this:

The Concept Outsource team helped us with tasks like exploring art styles, (world) design, and colors.

The Tech Outsource team helped us by creating the tool that quickly textured and eroded the islands, the painterly post-process filter in Unreal Engine, and some particle systems. 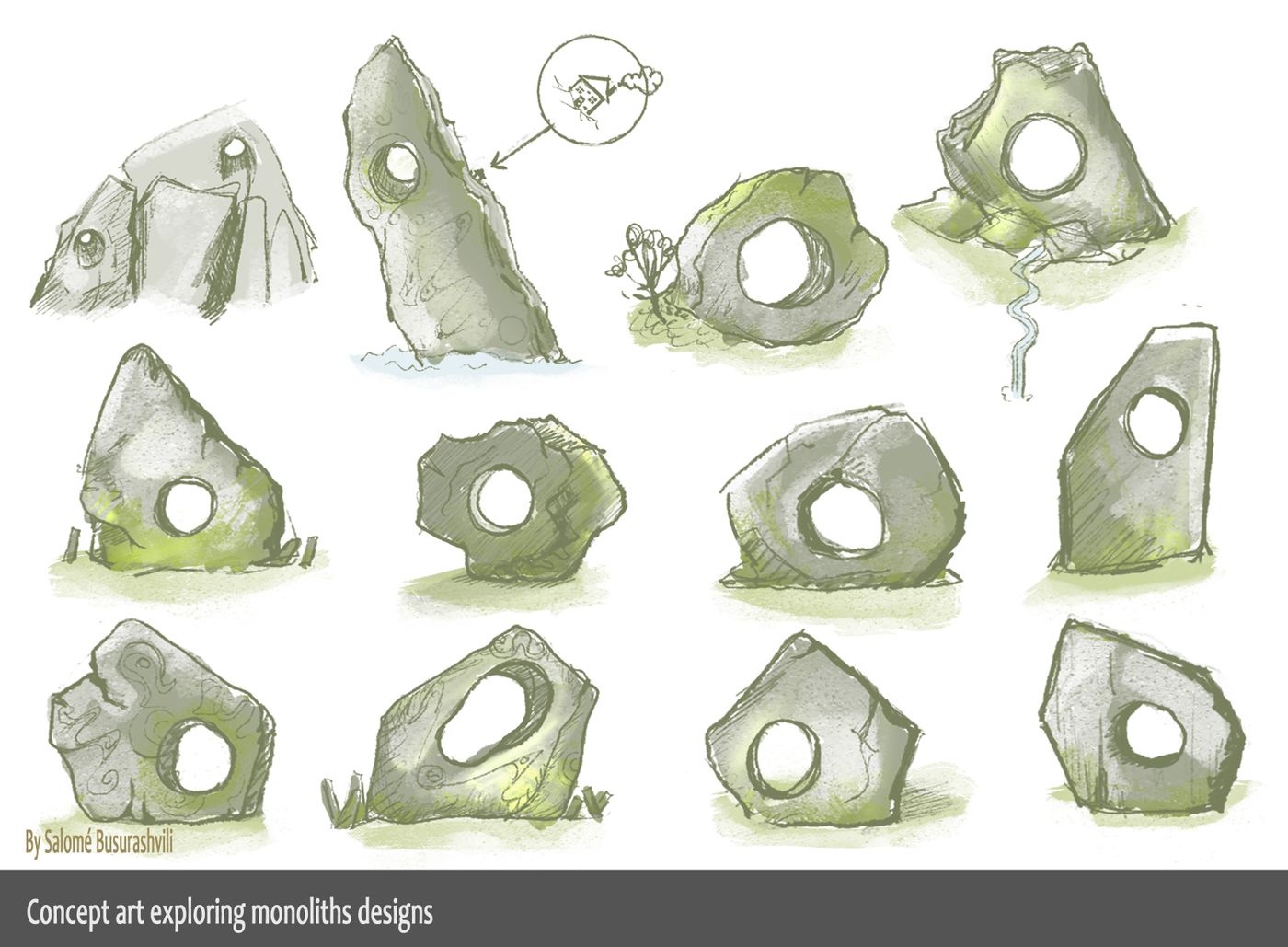 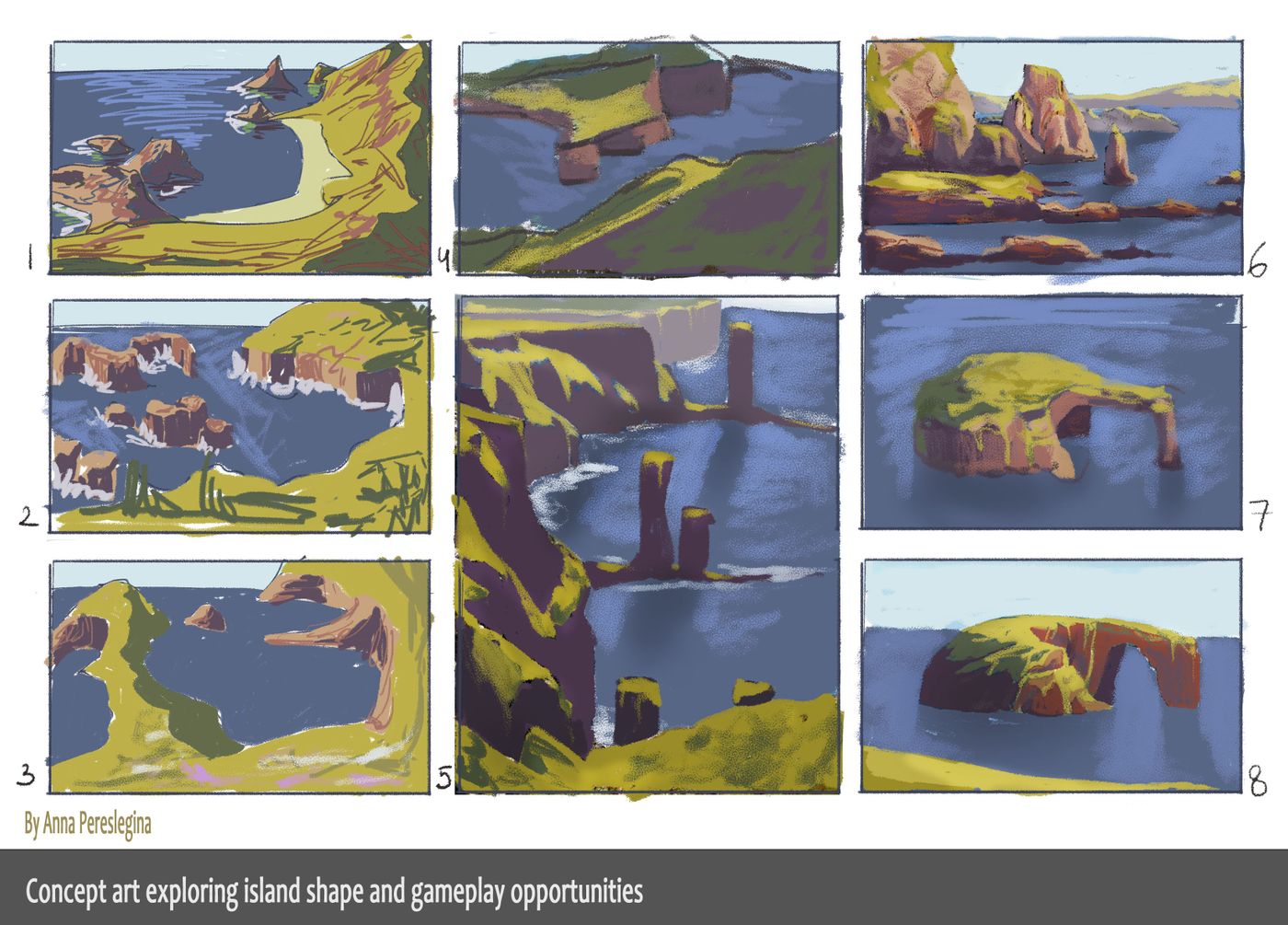 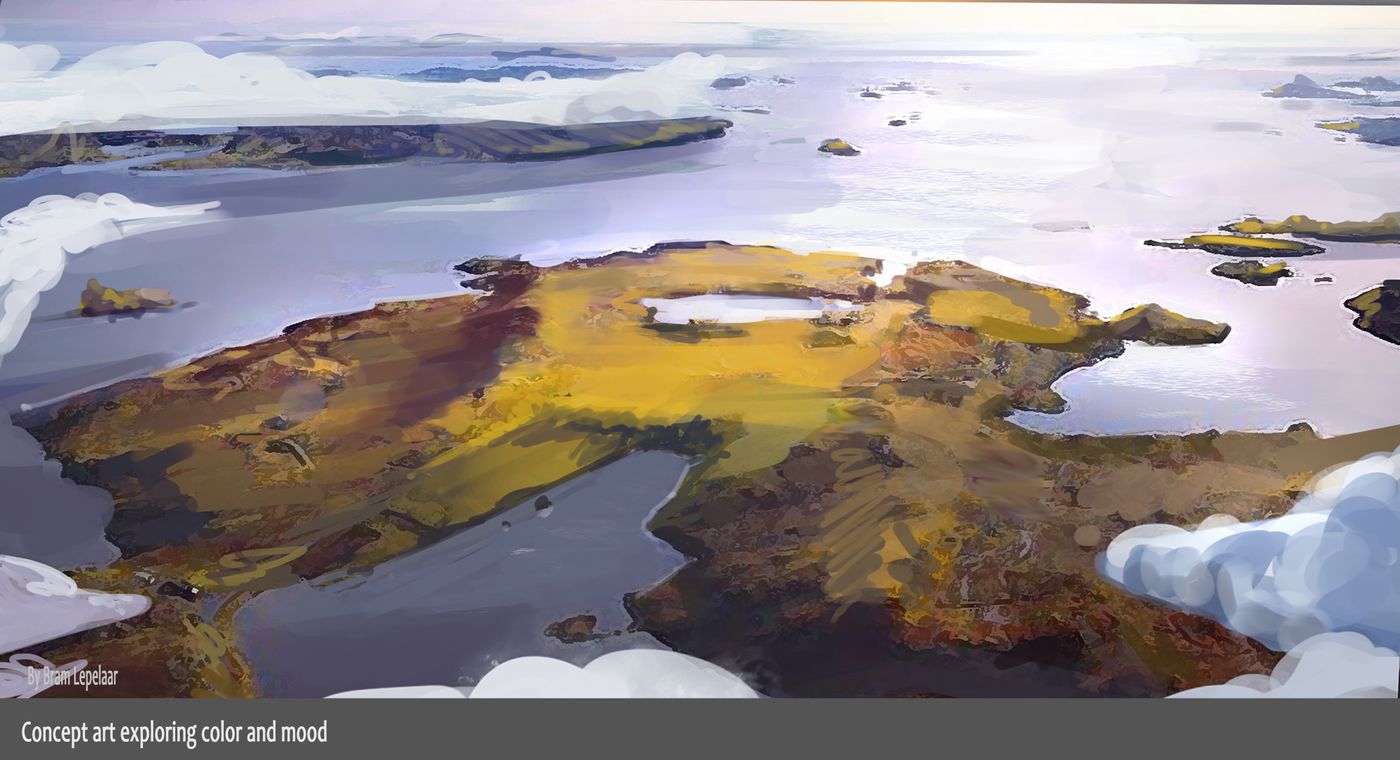 Please play SKYE if you have the chance. We would love to hear what you think! This is a link to our Discord Community. Feel free to drop by.

If you can't wait until the Steam release, you can play a beta version of the game on itch.io through this link.

The video below shows a Youtube video of someone playing our itch.io release, which gives a good impression of a player's experience.
Note: keep in mind that the beta version on itch.io is not the final product. There are still placeholders and bugs present in this beta version.

Thank you for taking the time to look at our entry. We hope you like what we made!

The music in SKYE is outsourced to Alex Tosh

Special thanks to everyone who helped and is involved with this project! 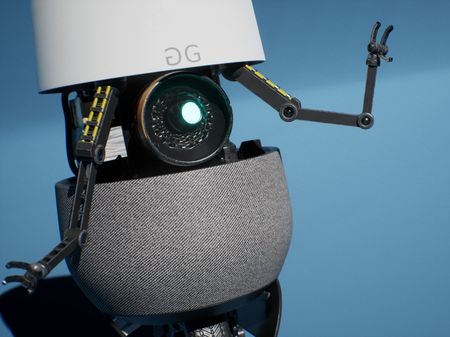 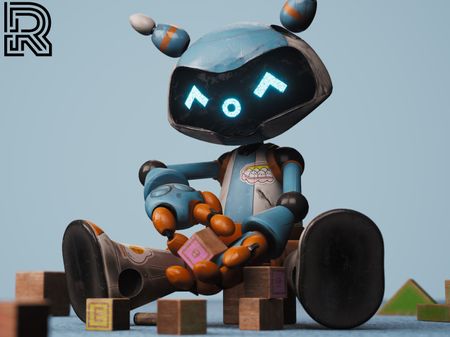 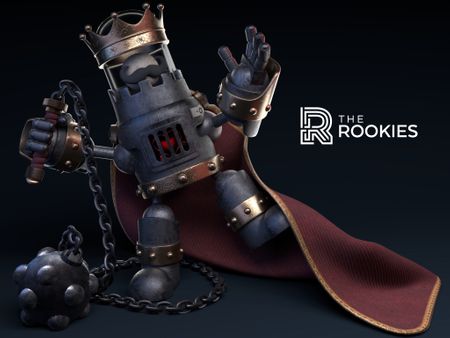