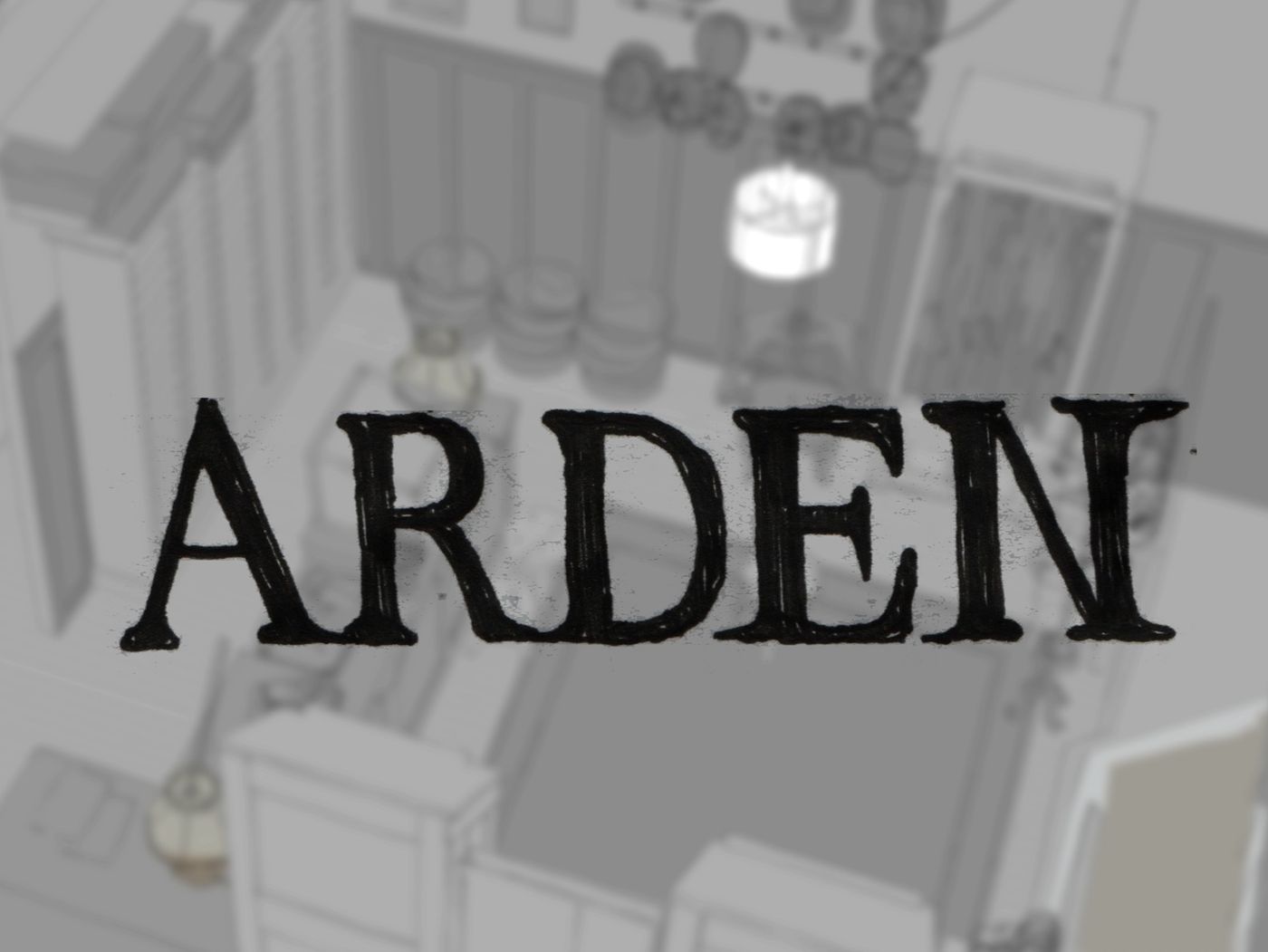 A small tailors shop based in Birmingham. 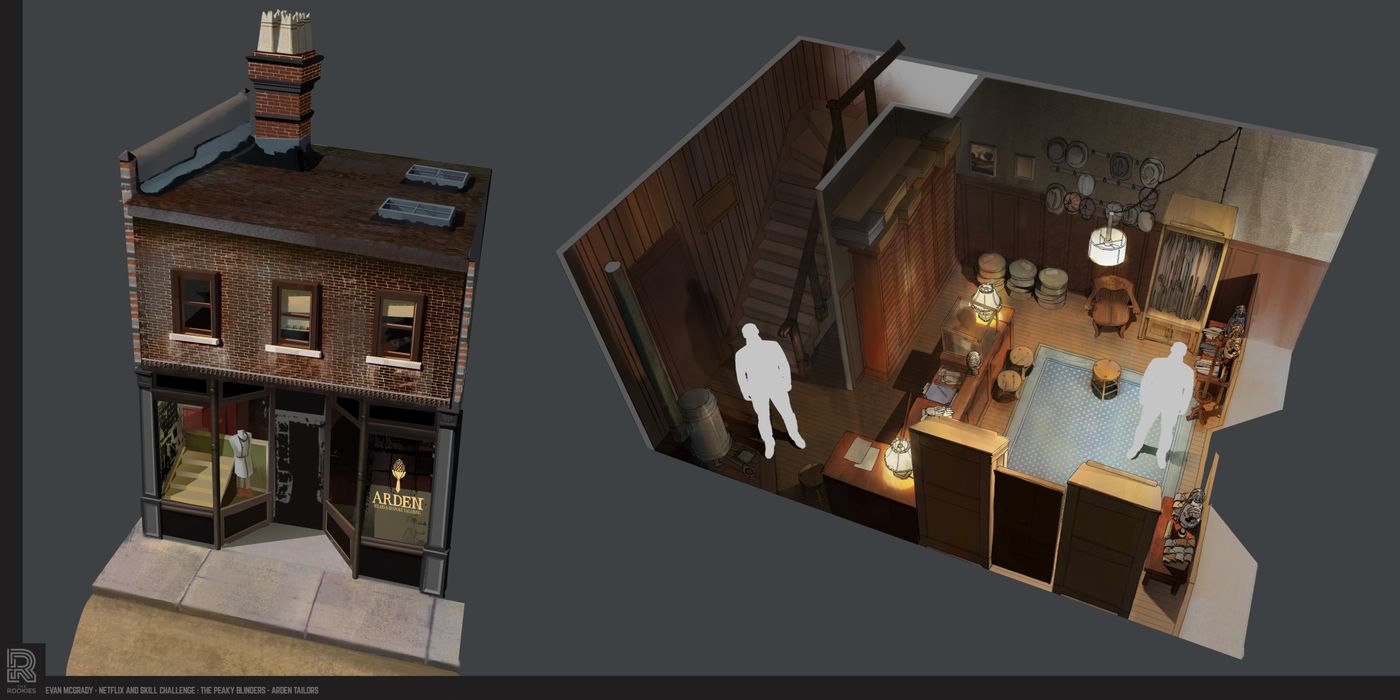 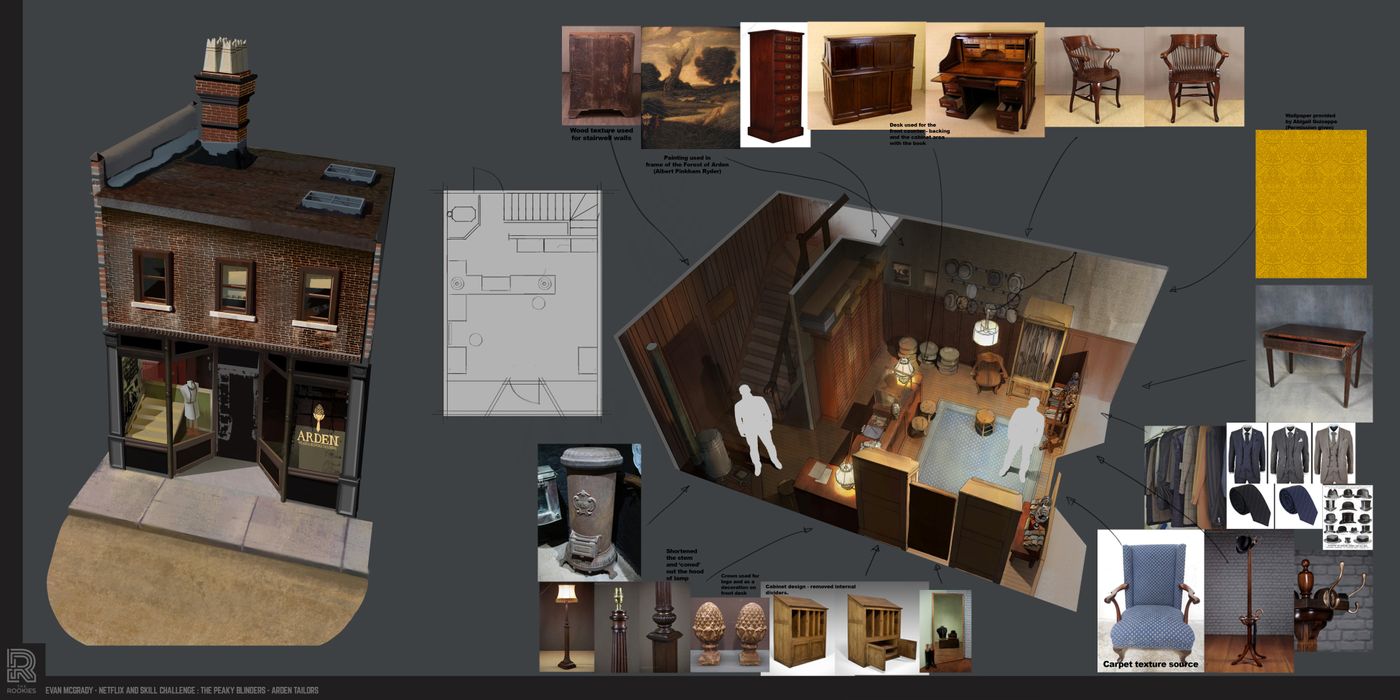 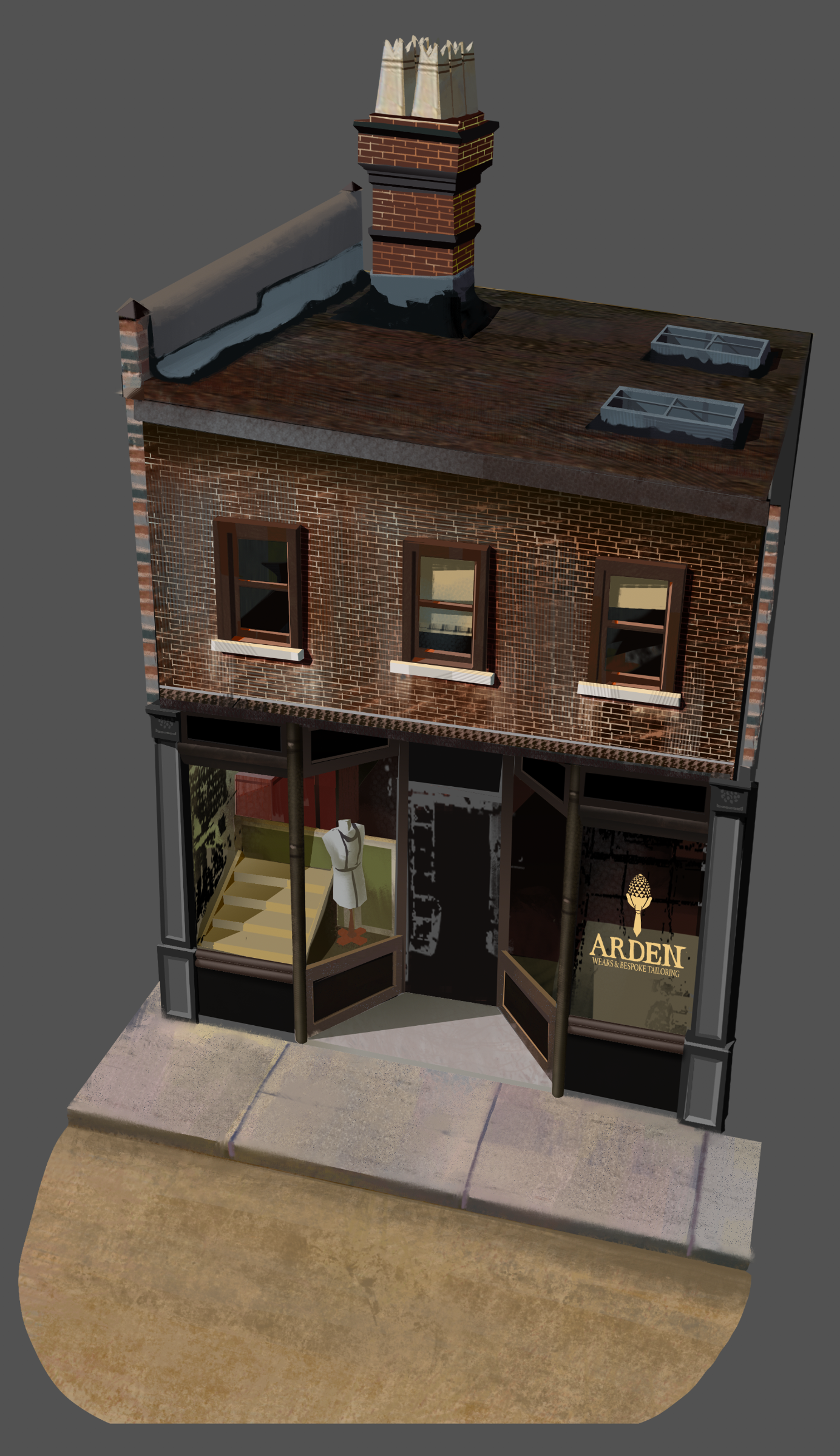 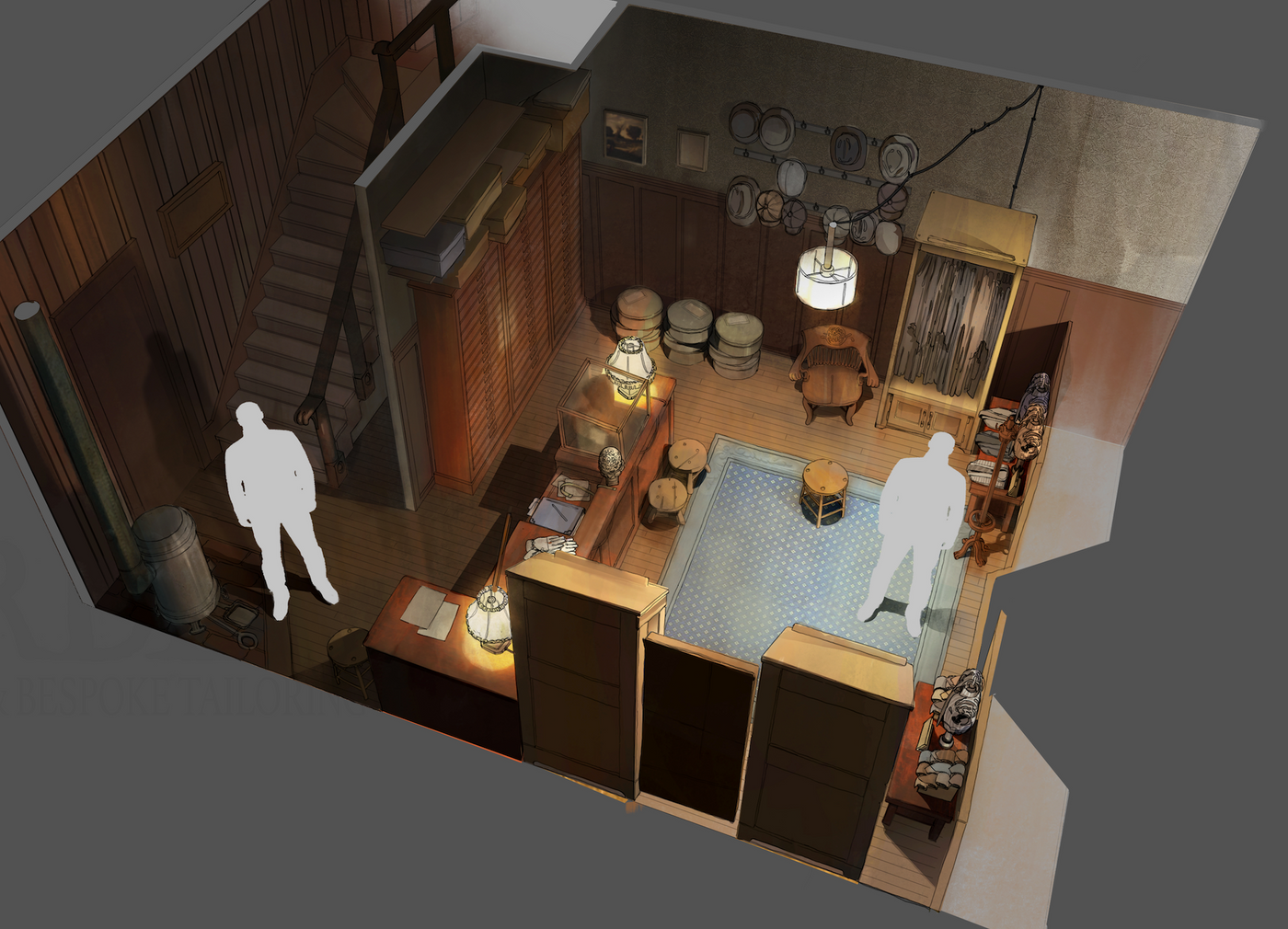 Closeups because file sizes are being an issue.

I started on this challenge really late in the month, and really don't expect to finish to the level it needs to be, but with school, the holidays, and traveling it was kind of hectic to find time to work on this. I did find it really interesting to try and cut corners to make up for lost time, and even though I kept trying not to photobash with this challenge I now understand how it makes the whole process much faster and will implement it far more from here on out. I realized I have an issue of working to much like an illustrator when I should be working like a concept artist, and working to much like a concept artist when I should be an illustrator. I also came to finally see how important 3D is and how powerful it can be when combined with illustration, even though I know NOTHING about Blender - I am now really excited to start delving more into the program. So far those are three big takeaways for me while working on this.

Before heading home I was able to binge-watch the first season Peaky Blinders - however that's as far as I got, so if I'm a bit naive in how the Shelby's work and the inner-workings of their operation that's on me. 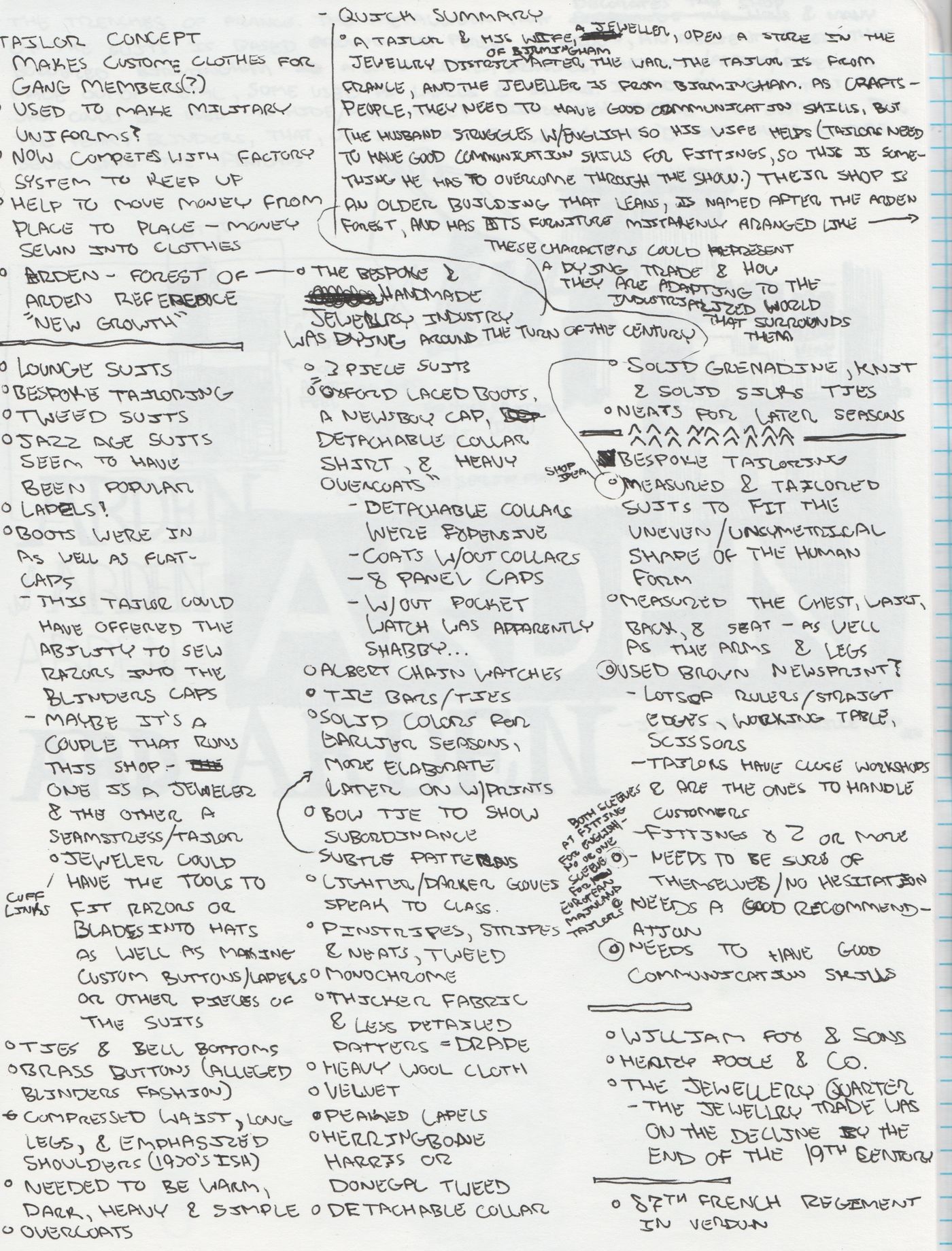 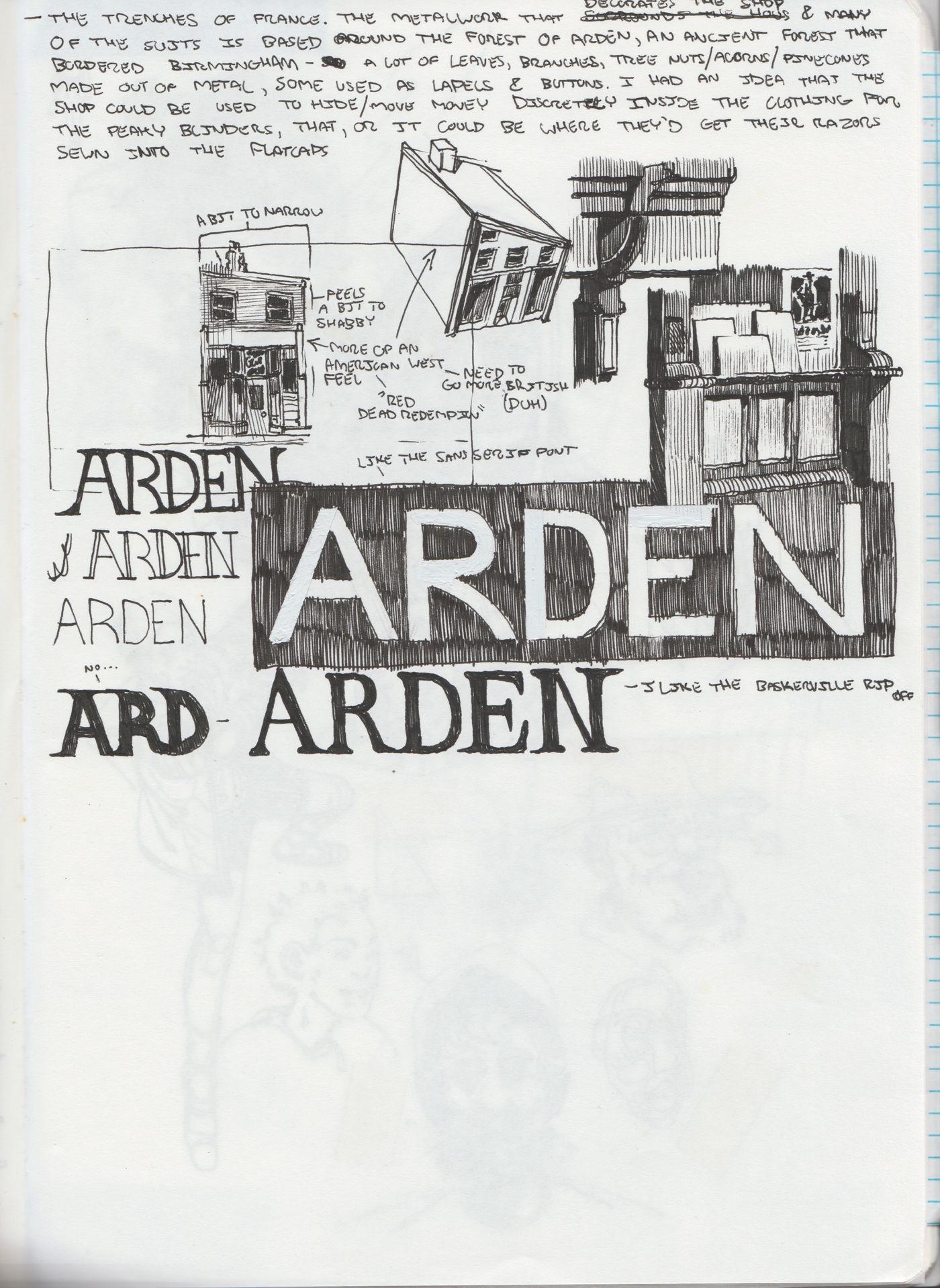 I apologize for the slew of  spelling errors in these notes - and a lot of the initial ideas that  haven't made it into the final so they're going to be cut entirely - but this was the gist of my thought process:

Having read reviews of the show, one of the historical debates was that there wasn't any evidence of there being razors, let alone disposable razor blades, sewn into the caps of gang members. So I thought, 'why not try to come up with an explanation of why there could be?'

From there I came up with the idea of making that answer be a tailor.

The show puts an emphasis on the importance of the many characters attire (it is used as a character-story device too, like how even though Arthur Shelby is the older brother he is shown to be a subordinate to Thomas by not wearing a proper Tie, instead, he wears a bow-tie) so I thought a tailor would be appropriate for the setting/story of the show.

I also get the impression of the 'dying west' motif in the show, and with Shelby fighting against the new sherif-in-town, I thought that picking a profession that was trying/having to adapt to the industrialized environment of 1920's Britain would be 'fitting' as well (haha...sorry that's the last one)

How this character could have fit into the Shelby's storyline (and could be an explanation of how they are adapting to keep their shop alive) is assisting in the moving of money for the gang by sewing it into the gang members clothing - as well as the razors of course. This might not really work for the show or the story but I thought it might be interesting to explore.

Moving forward I thought about making the owners of the shop be a couple - one is a tailor and the other a jeweler. When researching I found out that the Blinders seemed to wear brass buttons as a fashion choice - so if the couple was making the gang clothing, they could also fix their buttons to match, much like uniforms.

This was where I thought it could have been interesting to put in a bit more character building for the tailor. With him making the 'uniforms' for the gang why not imply that he made uniforms for the soldiers, but I realize that may have been a stretch.

I looked a lot into how tailors worked - mainly following the mantra of "Form Follows Function". Bespoke tailors were sought out over 'ready to wear' clothing mainly because of the ability to make unique fittings that perfectly fit the wearer. That included being able to compensate for the uneven qualities of the human shape. So when I started to put together the look of the shop, I thought making the structure itself lean to one side (or at least slant) could be a subtle way of referencing that part of the job (also referencing to the age of the building as a lot of older structures will lean/droop in some way).

I jumped a little ahead of myself and tried to come up with a name for the shop at some point while working on this. While researching the area I stumbled on the story of the Forest of Arden, a heavily wooded area that bordered Birmingham that has since disappeared. I played a bit off the Robin Hood's storyline of Sherwood Forest - and thought naming the Tailor's shop, Arden Wears (or something along those lines) could be an interesting juxtaposition with The Shelbys/Peaky Blinders, Inspector Campbell, and then this tailor's shop (which as mentioned above could sew money into clothes and 'hide' away weapons for the gang) acting as the show's Sherwood Forest. From that I thought the interior of the shop could look similar to a forest in palette, design, decor as well as a possible logo. 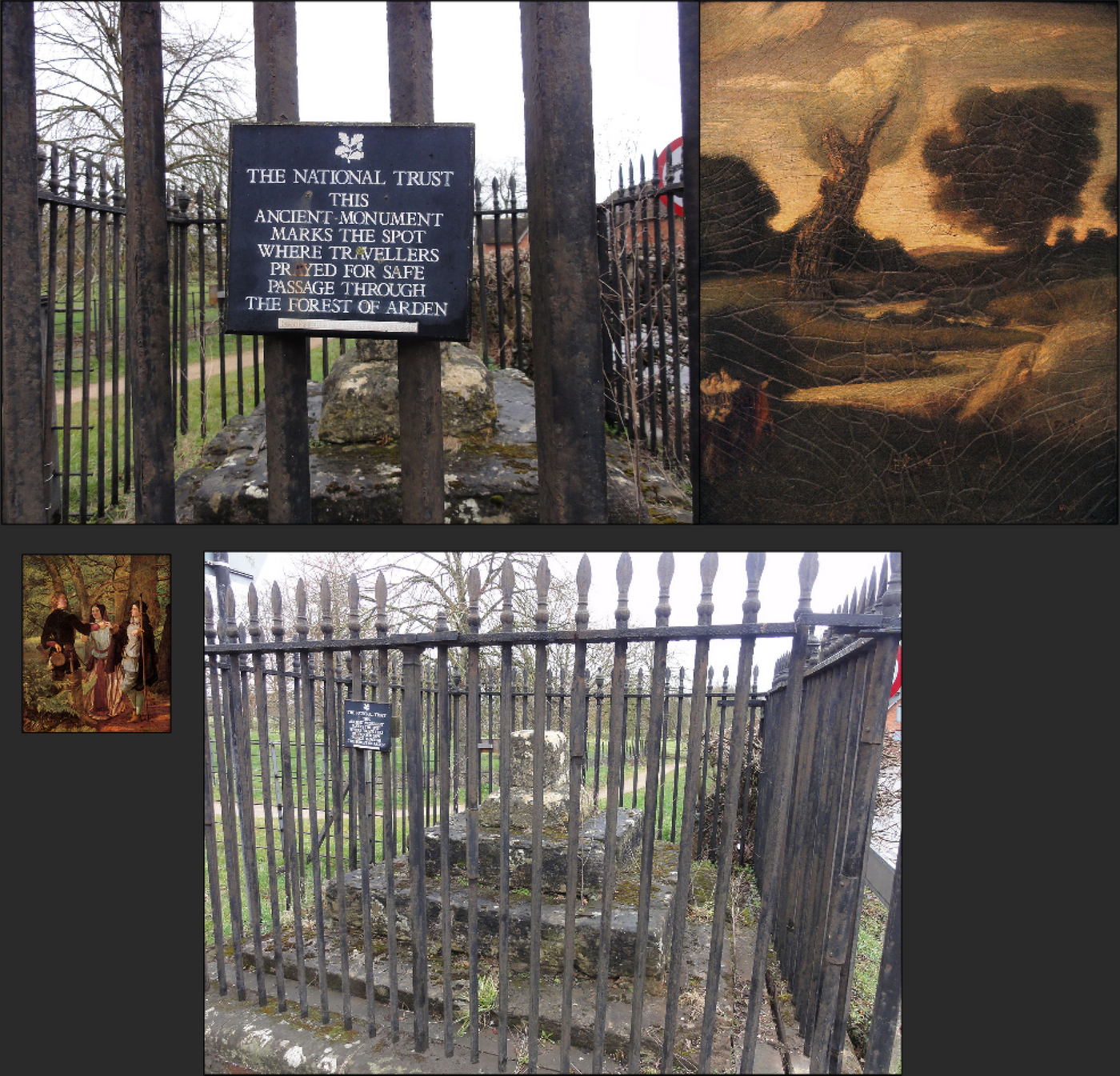 Some interesting things I found associated with the Forest of Arden - really liked the paintings and thought they could work as a prop for a picture frame in the shop. 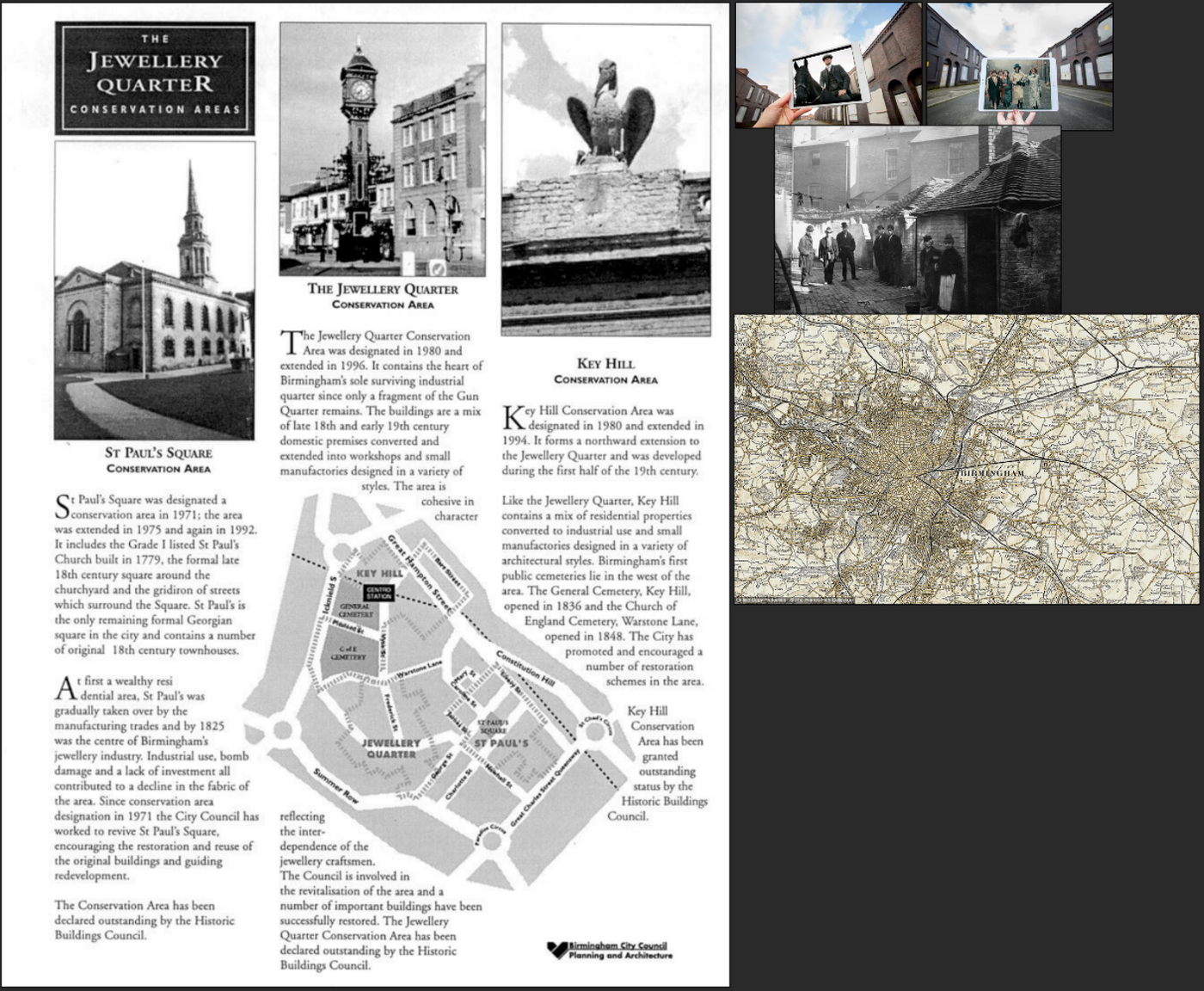 With this being a historical-fiction story I tried to find a location in Birmingham that would work for the setting of the shop. I found out about the 'Jewellery Quarter' and figured with one of the characters being a jeweler that it would be fitting in some fashion. 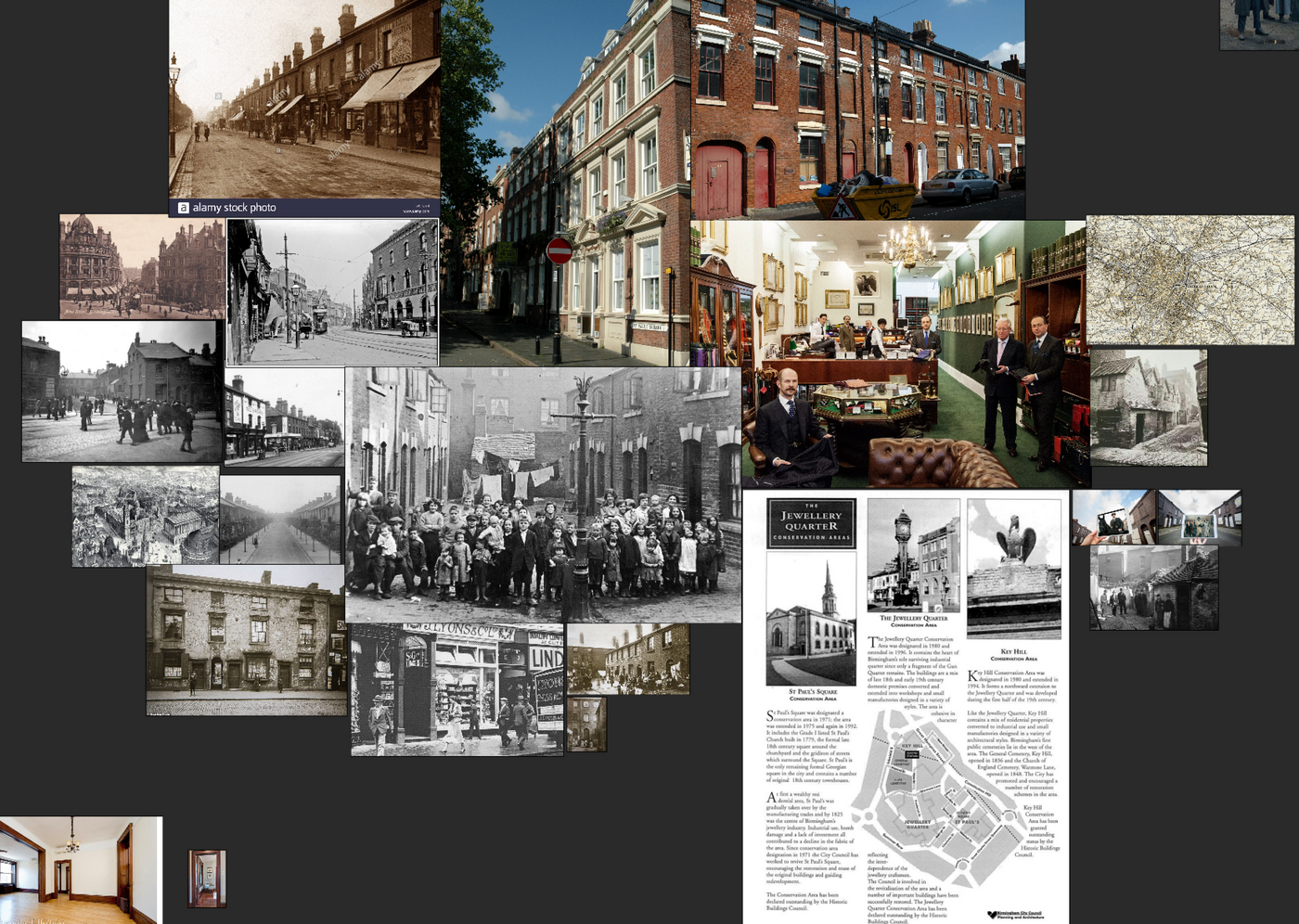 Some more images of shops, period photographs, and architecture of the area. 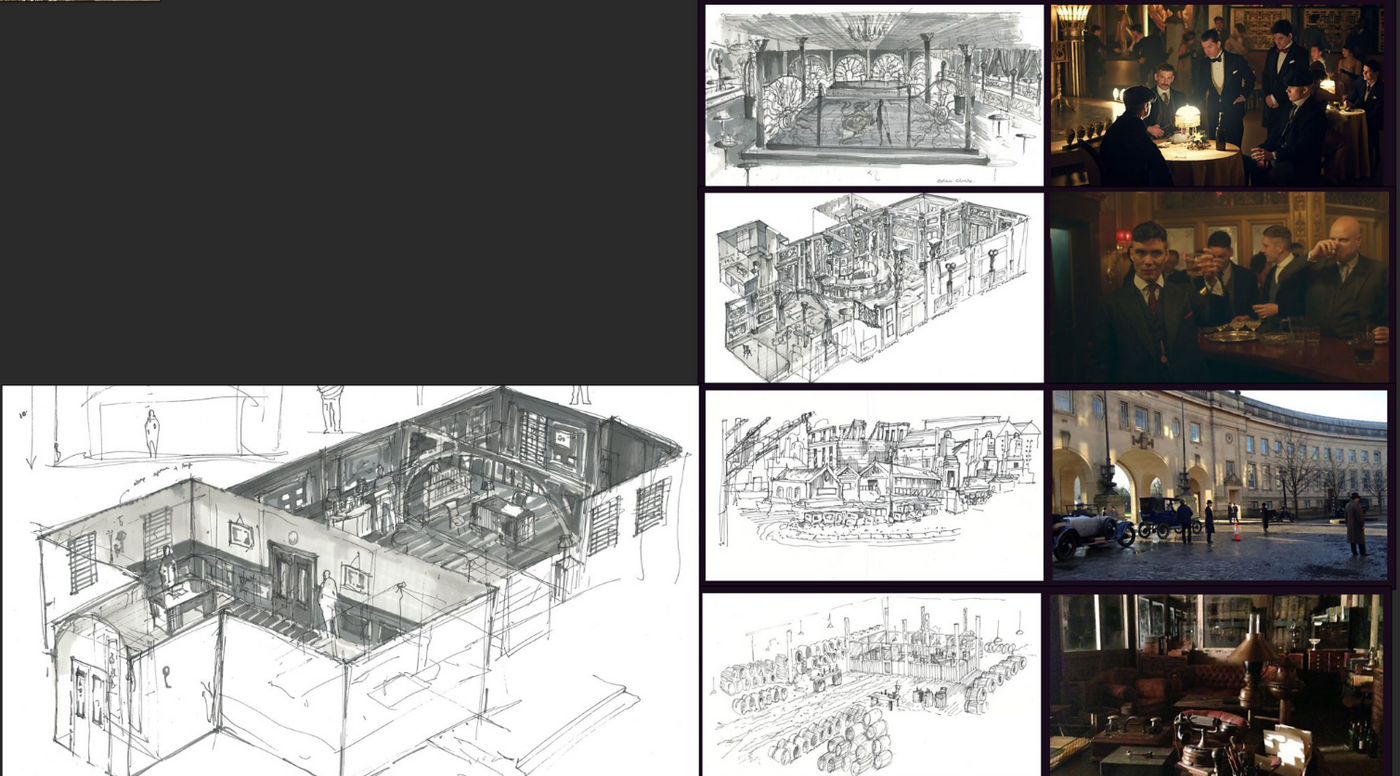 I also stumbled on some actual concept art of the show which was really interesting to take a look at and get a feel for how the show approached building a scene/set. 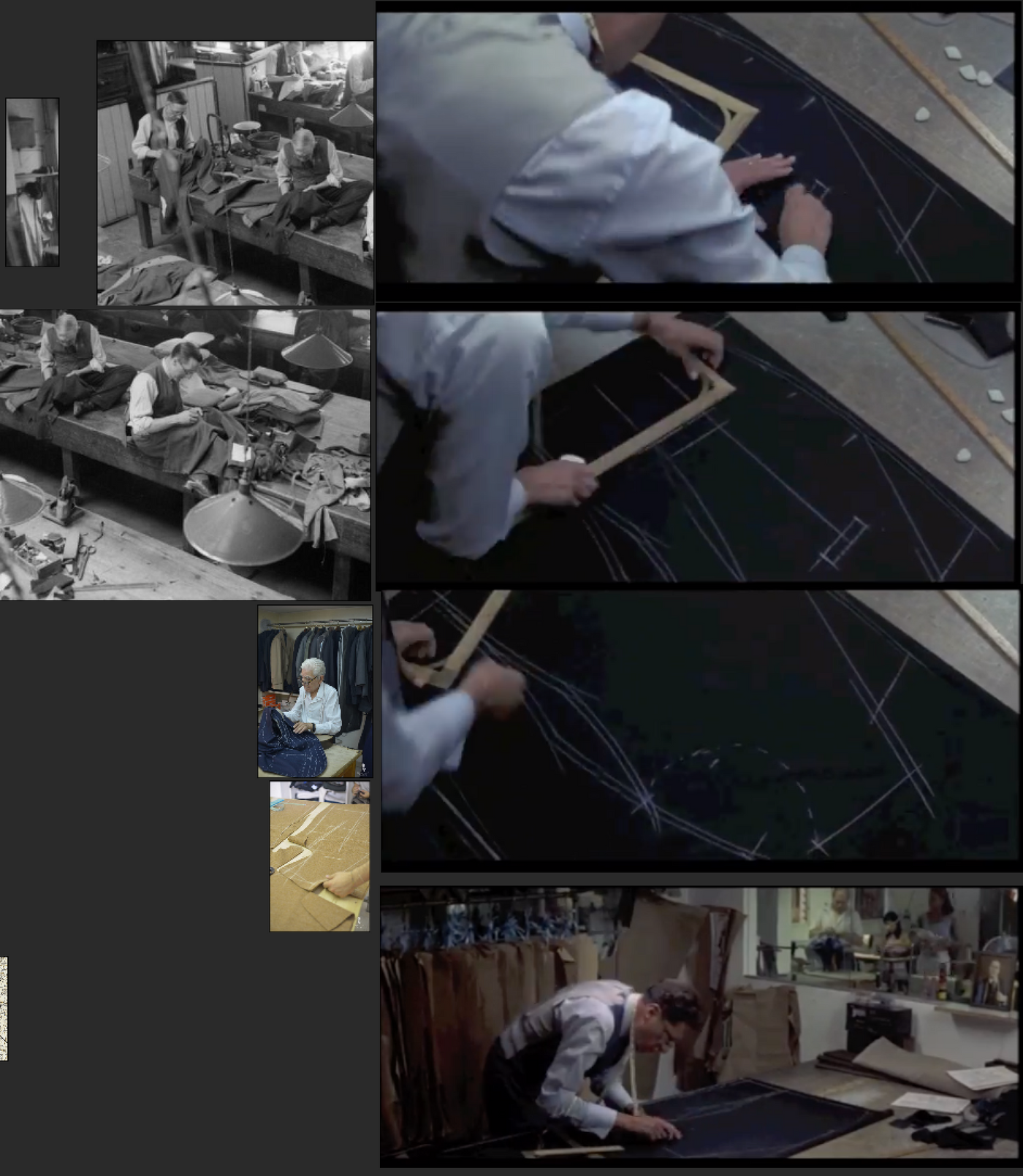 I looked at Bespoke Tailor shops and the methods of how they work to get an idea of the props that might be in the scene. 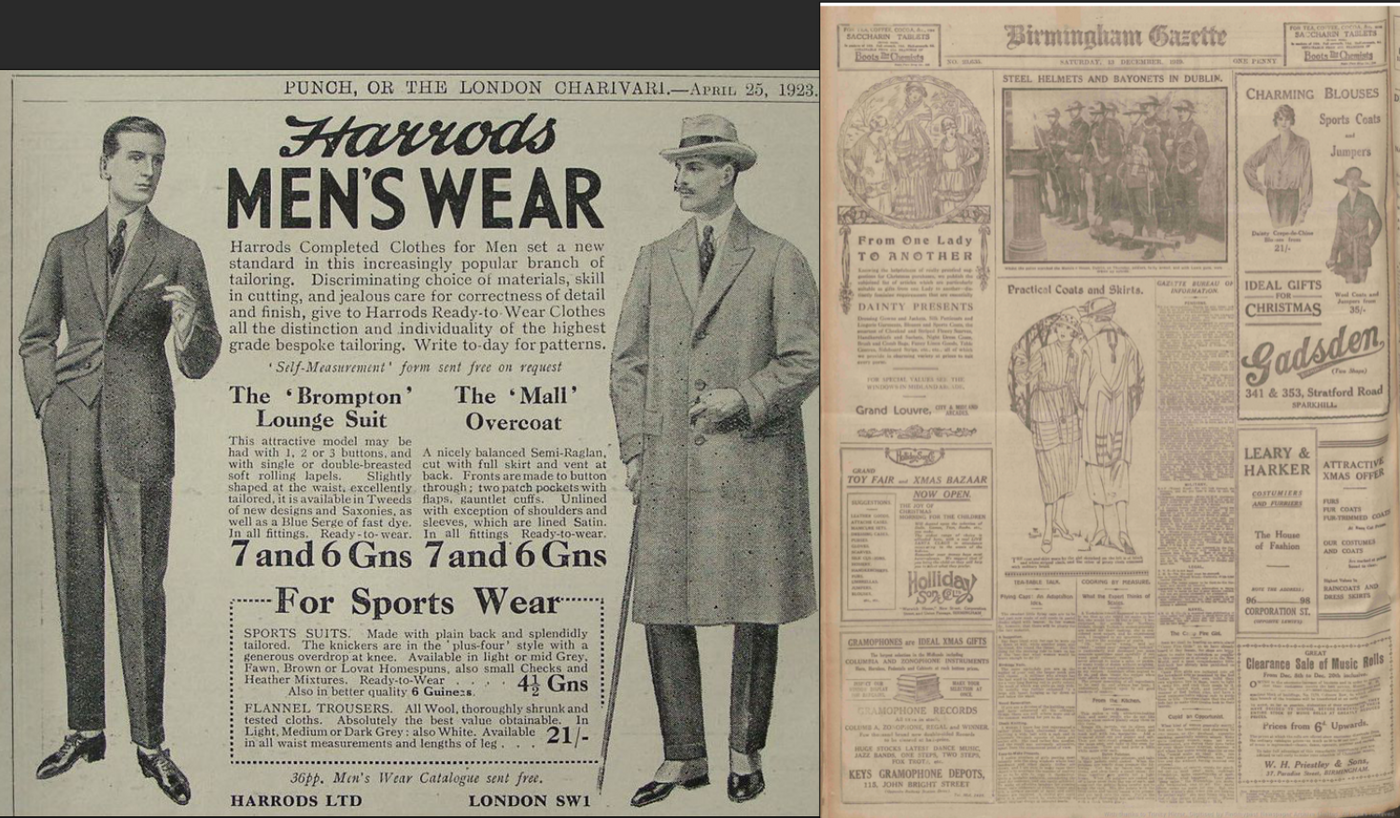 Hoping to be a lot further than I am now, I looked into what newspaper advertisements looked like in the 20's to see what people were wearing, buying, and also so if I got this far - I could design an ad for the shop.

I compiled a couple references for the clothing that could be sold in the shop - people liked tweed back then. 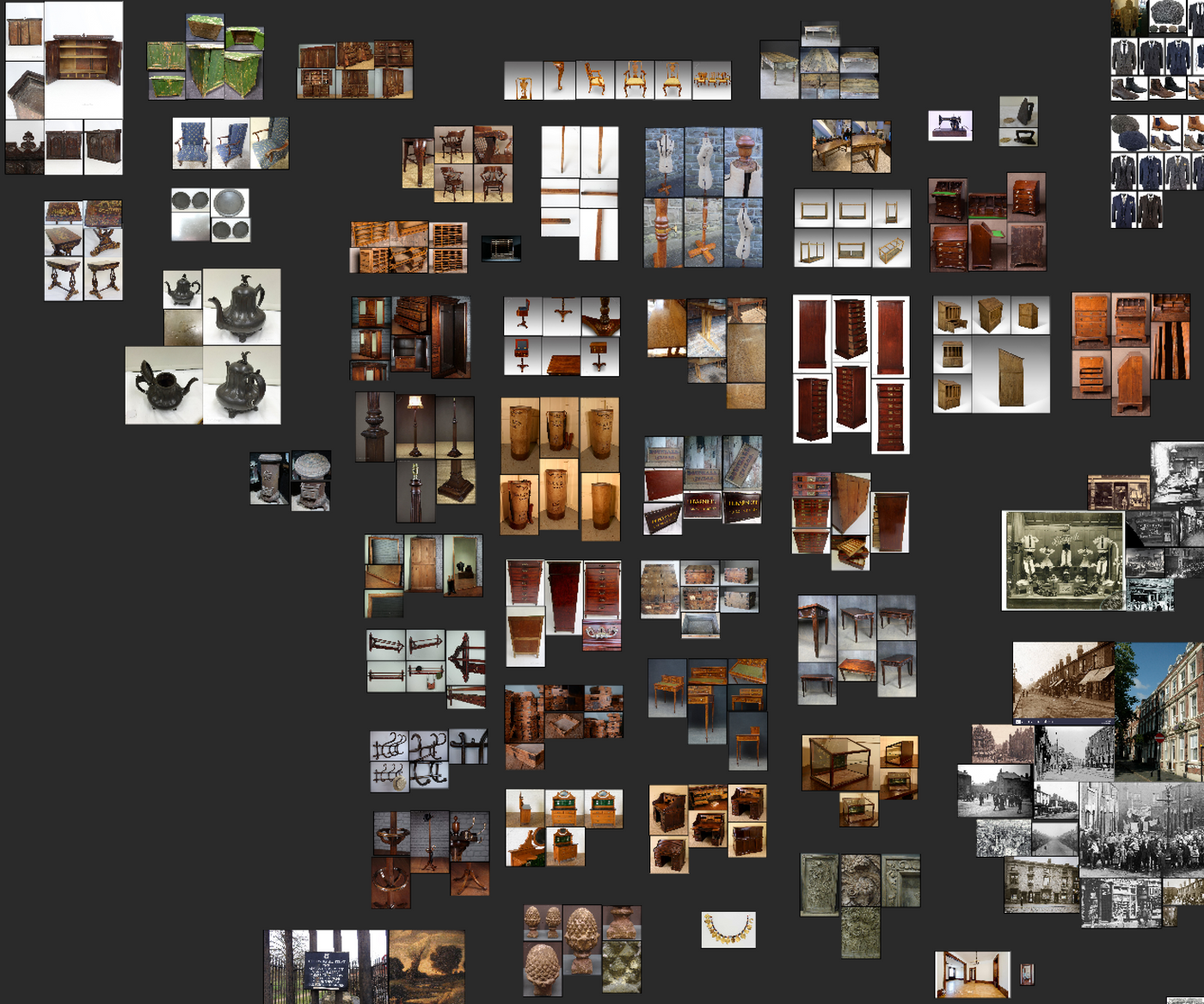 I went on an antique database and spent a solid amount of time "shopping" for furniture that would be from the time period. I've never tried to design a historical setting - so it was really nice to try this out. 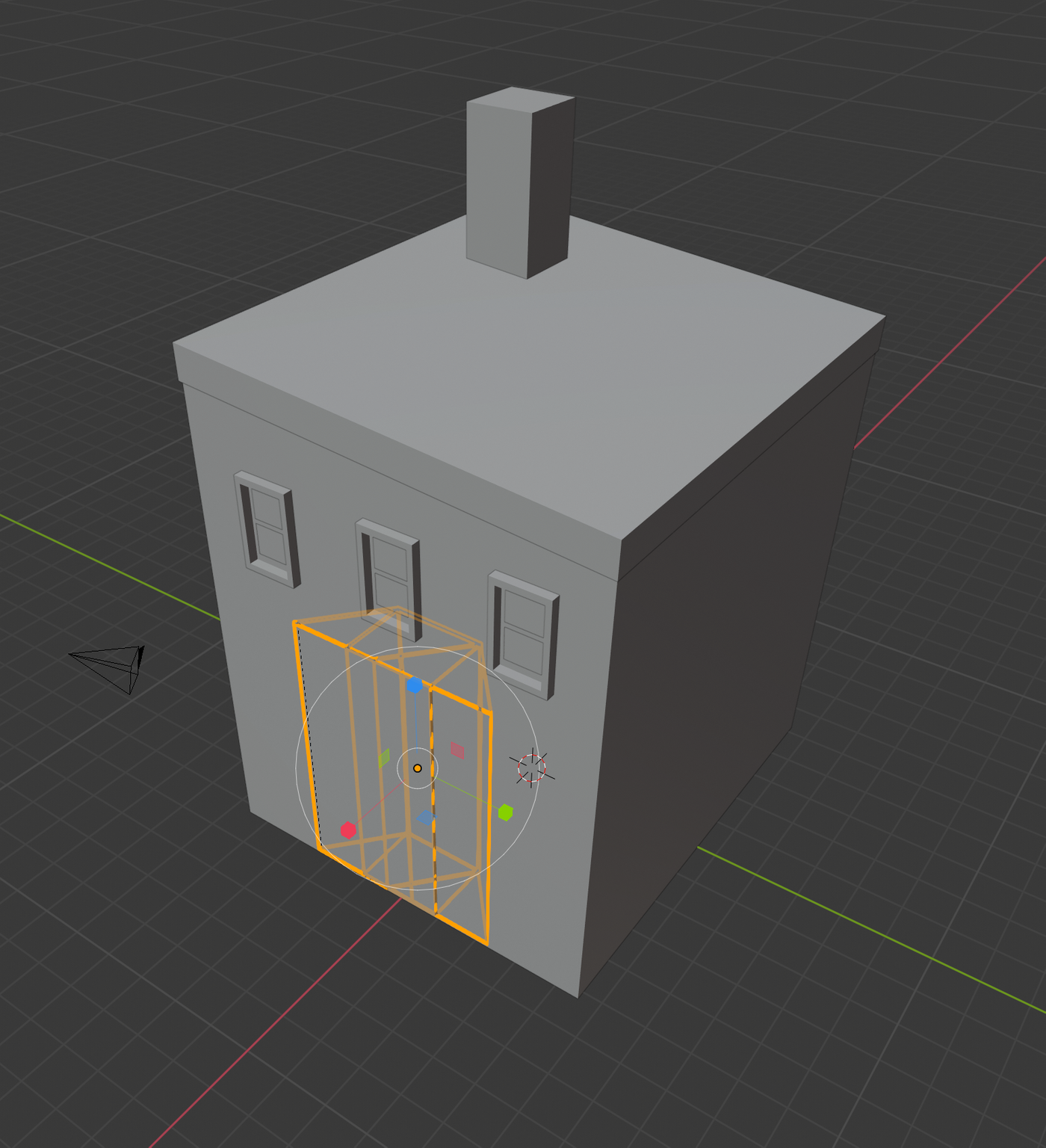 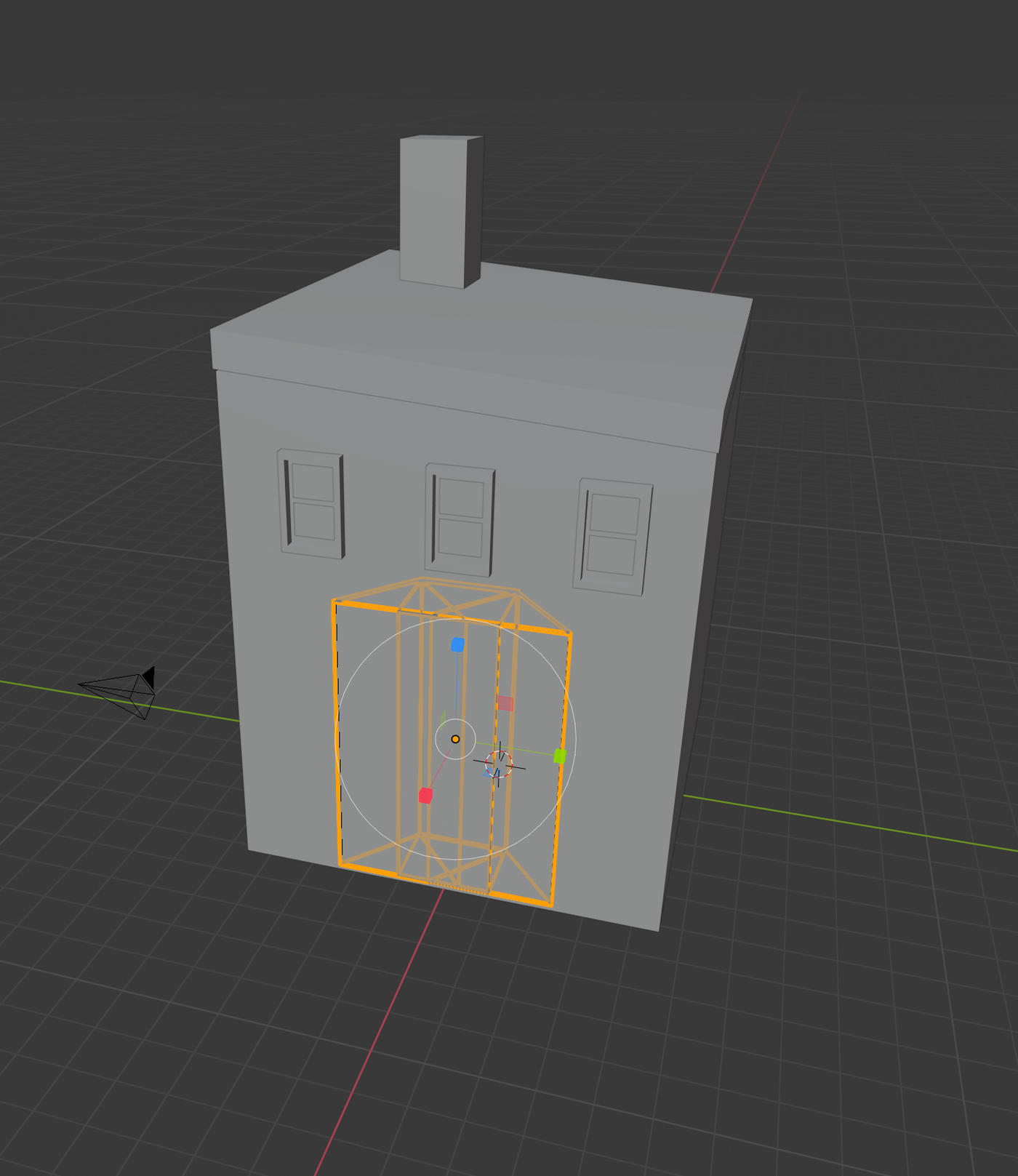 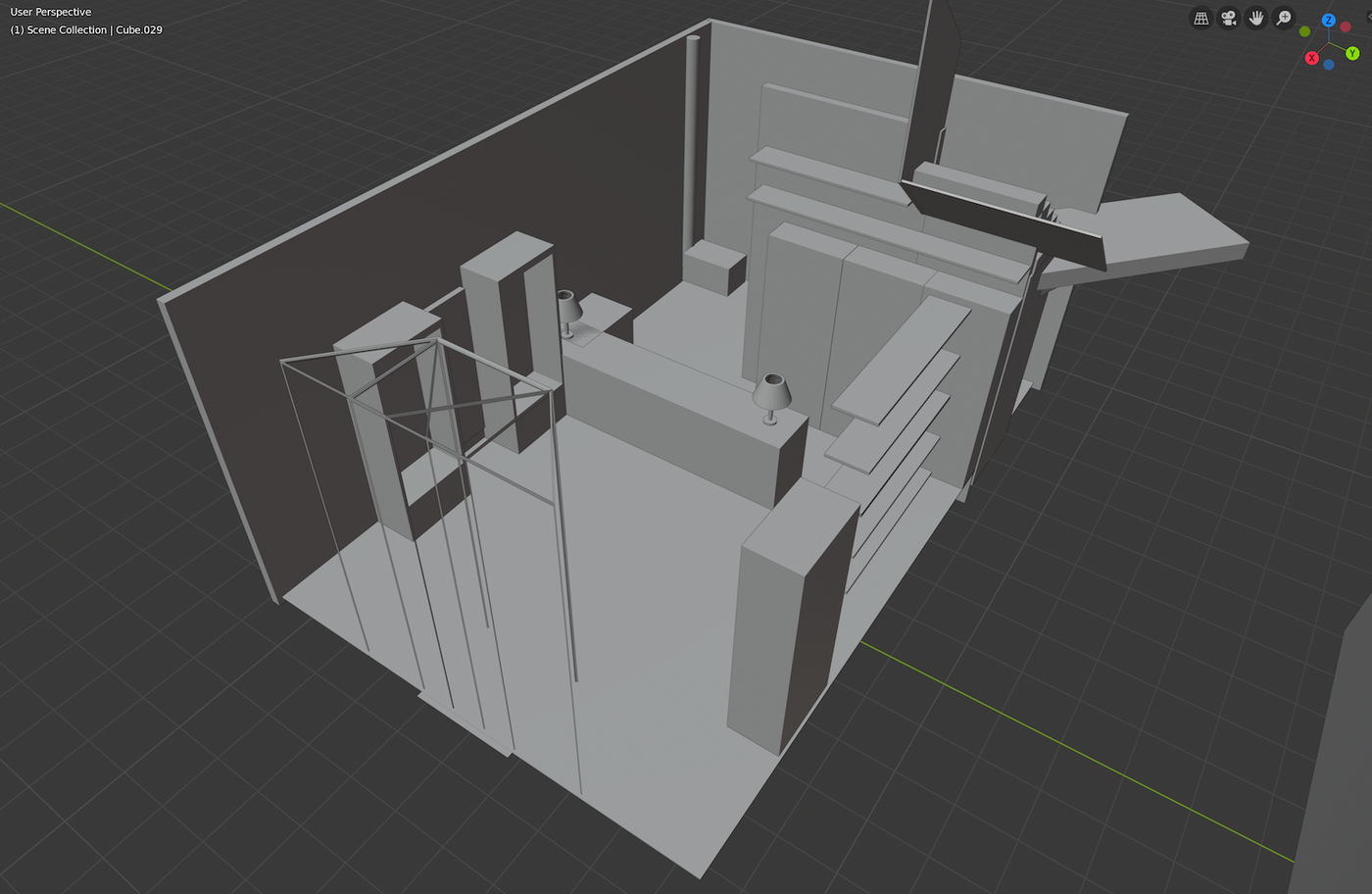 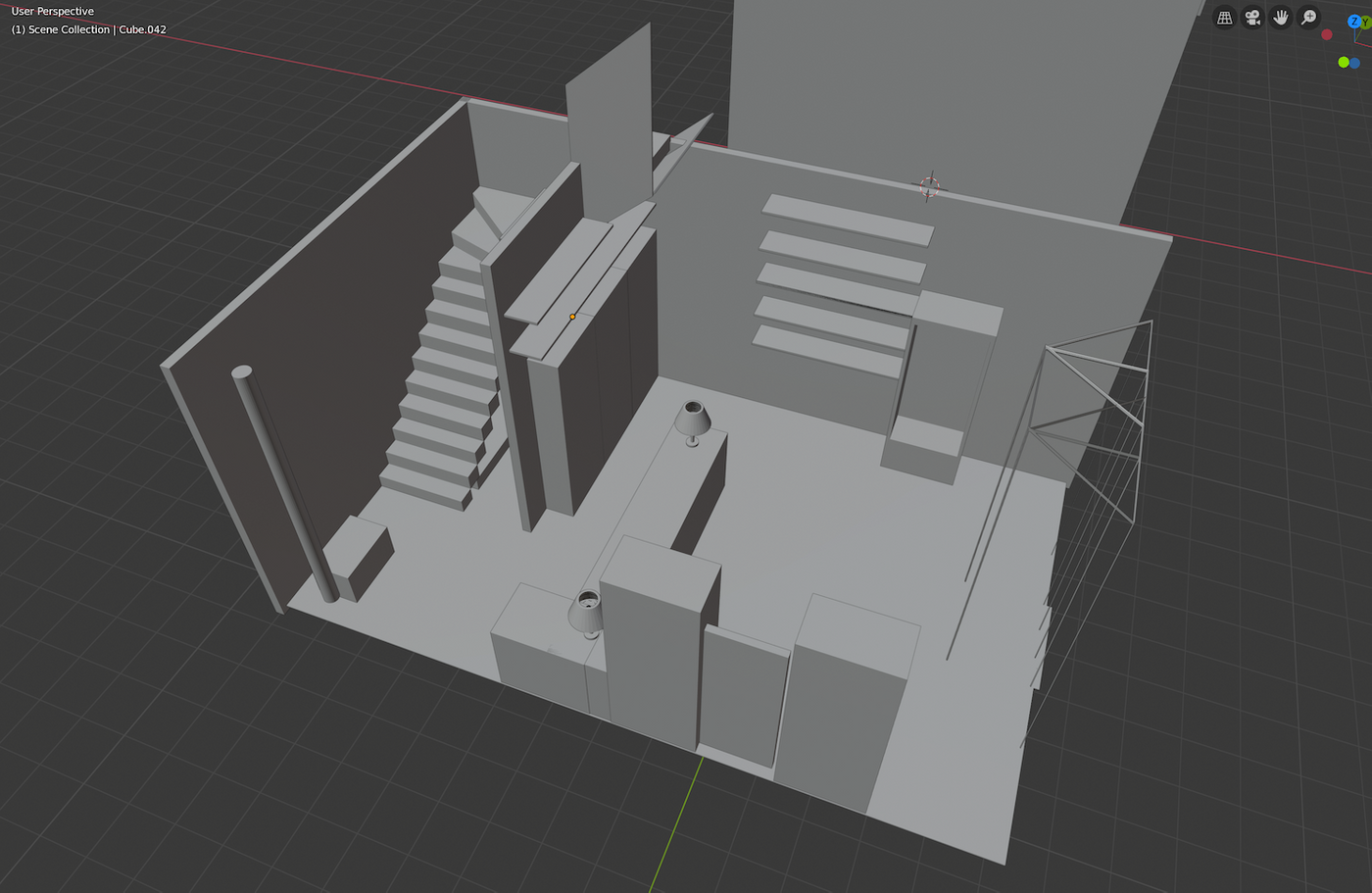 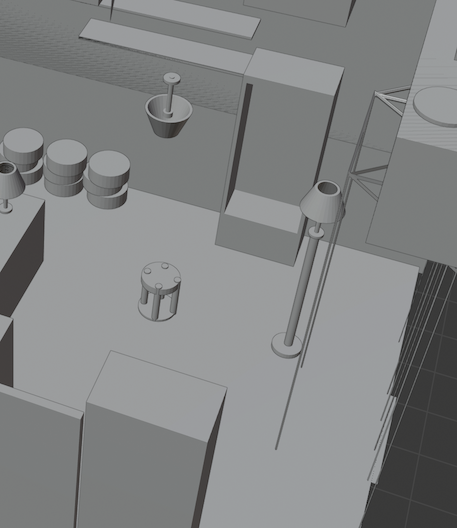 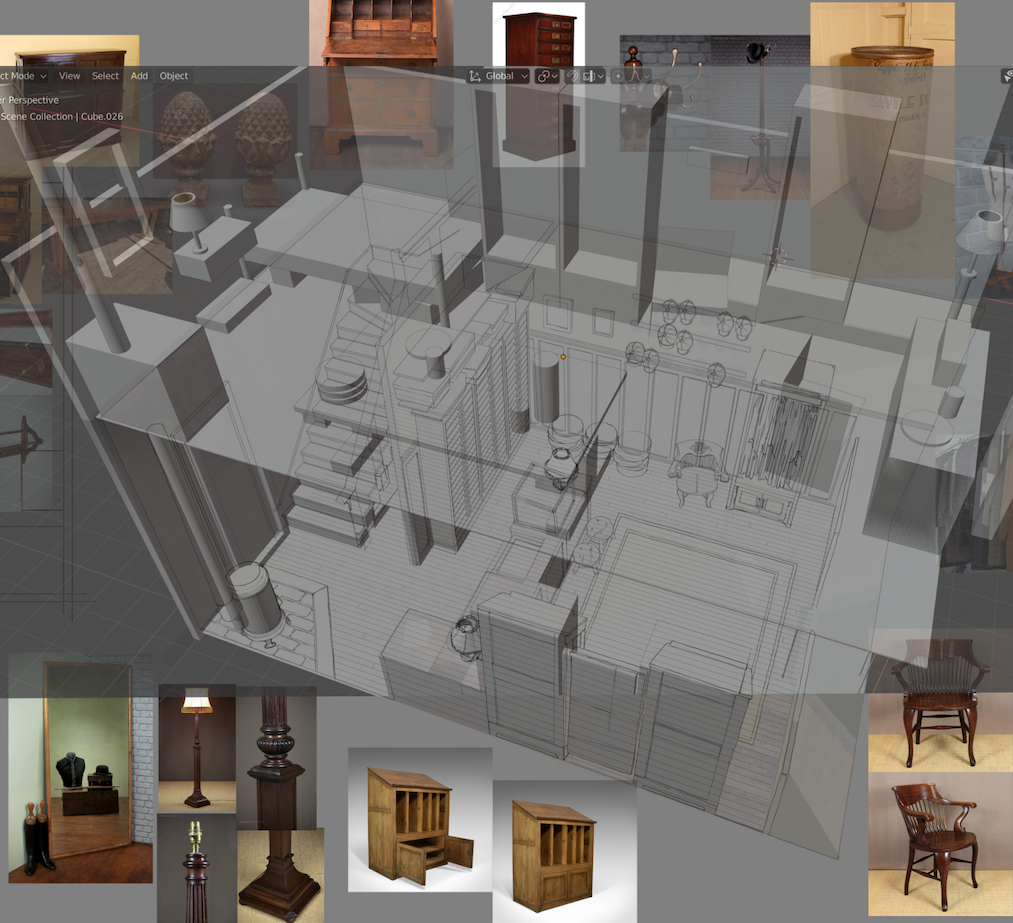 I am relatively new to 3D but I just thought I'd try at least making a model out of generic forms that could help with the perspective and other angles.

It helped a LOT, but I need to start pushing myself in this area. That's one of my goals at the moment

I had plans on making the upstairs of the shop and refining the bedroom/living area/workshop for this couple. Didn't get that far but I've learned a lot from this so I'll take what I got put together.

(As you can tell I'm a god at Blender...advert your eyes) 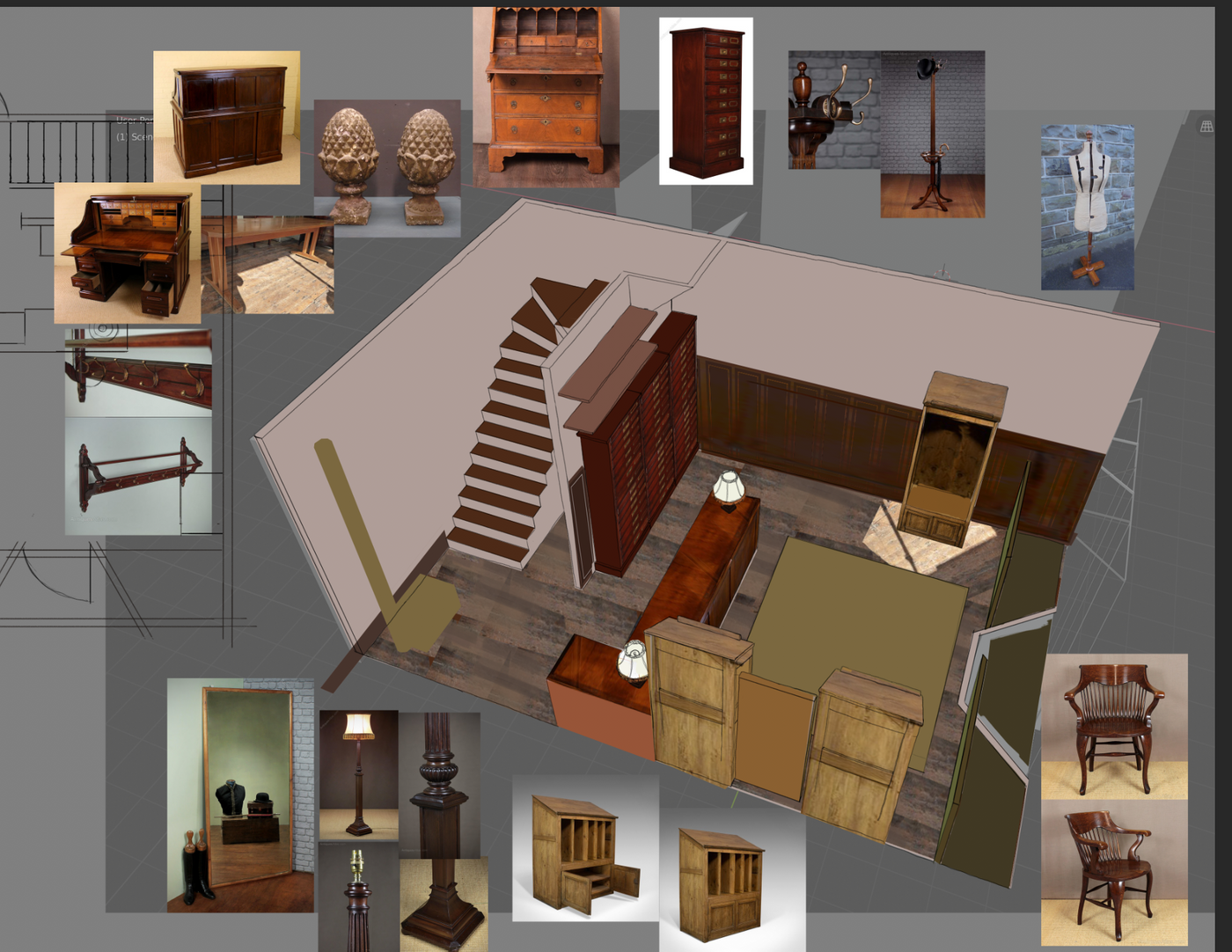 For my first pass I quickly threw some photo's and snippets of texture into the scenes just to get an idea of what goes where and what the shapes would look like in perspective. I lost the process work for the outside but I did a lot more clipping masks, added photos and then painted over them with a flat brush.

A few notes for myself: I need to work on layer management, I require a lot more sketching and planning for myself at this stage - I want to be painting and drawing more than having to skip from Blender to PS continuously and to fix that I need to have figured that out earlier on.

I also decided to work on the logo a bit, this was a last minute addition so the variation is limited to just placement, but I wanted the pine cone (maybe a pinecone???) prop that's on the desk to come back into play - as well as keeping with the theme of forests and foliage.