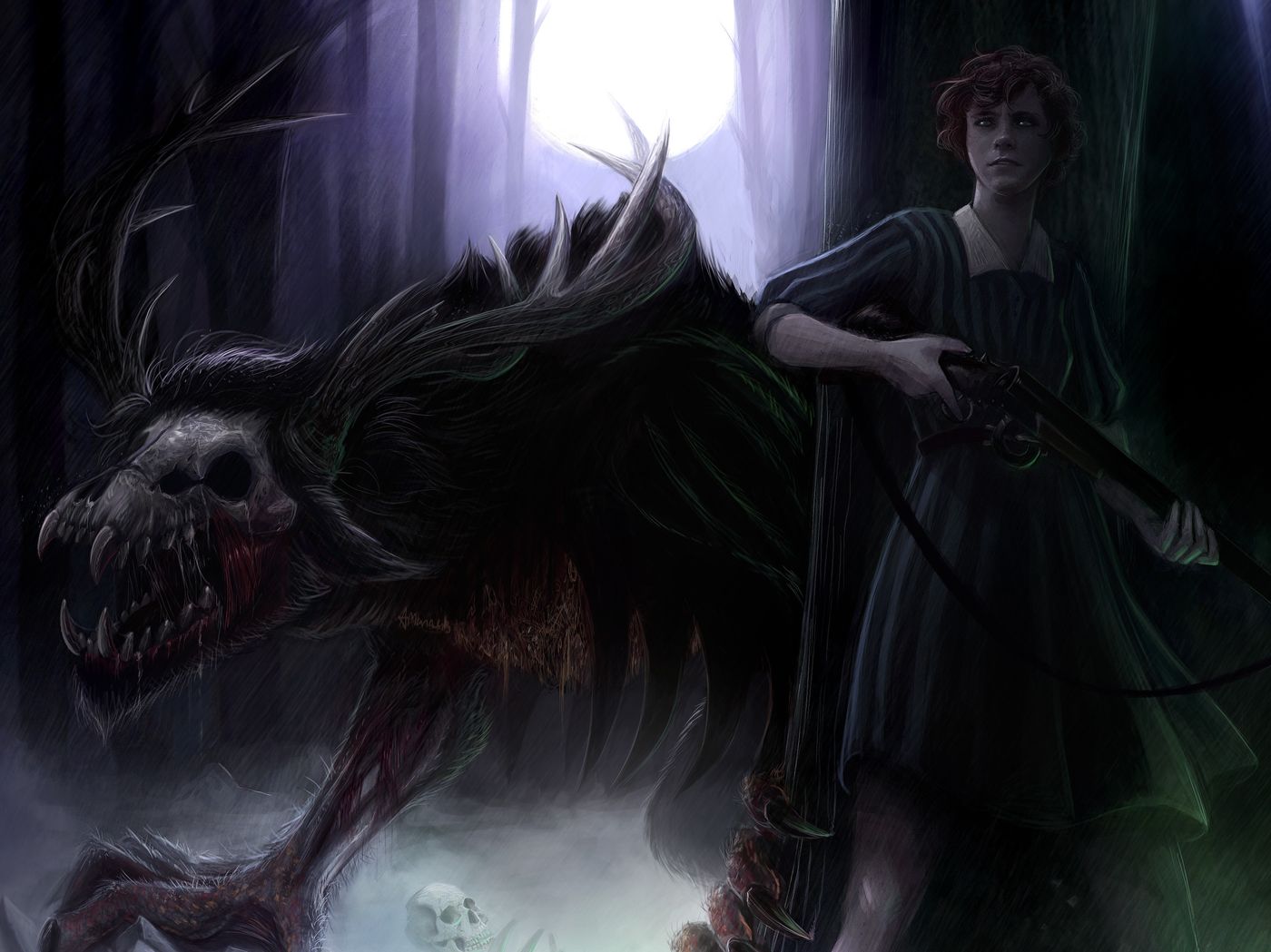 Curse of the Wendigo

A small project I did for a creature design inspired by Bloober Team's games and artwork.

0 63 0
Round of applause for our sponsors

Curse of the Wendigo 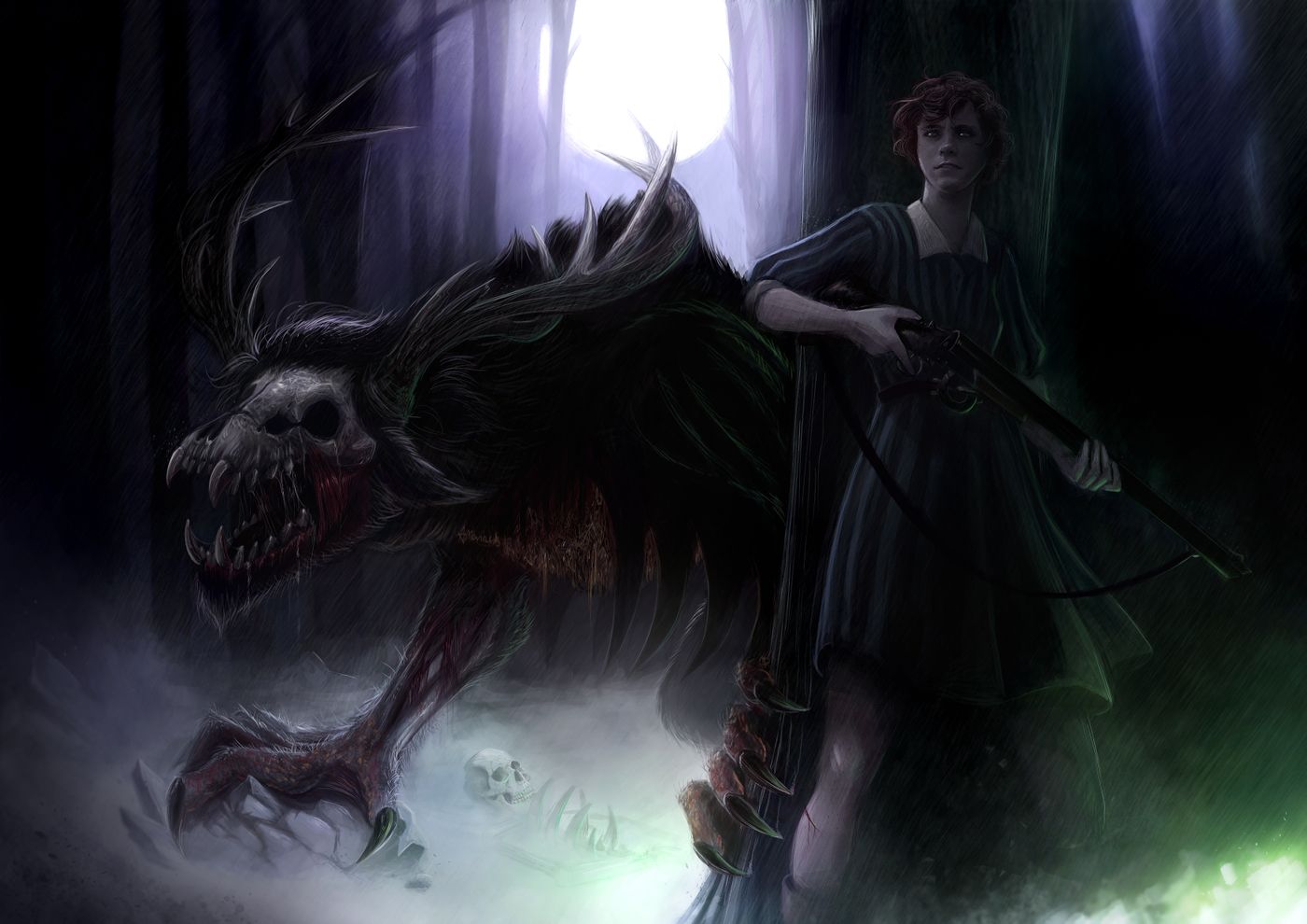 (Continued) Above here is the final painting.

I used a combination of photo bashing as well as painting. I shifted the girl further to the right – I’ll call her Marilyn Summers as it seems ironic for the winter connotation - behind the tree to improve the composition so that the Wendigo is the main focal point. I used actress Sophia Lillis’ likeness for her face as I notice a lot of her characters in movies and short films revolve around dark tragedies and supernatural backstories, and felt that if this were a real cinematic experience, she would be a great choice for a protagonist role. With each game Bloober Team makes, although gameplay is in first person, they are starting to show their protagonists more, and so it would not be out of place to show her character in a cutscene, for example. I gave Marilyn simple colours that would contrast the Wendigo, such as a blue dress, and made her hair red because I was inspired stories such as Red Riding Hood and as Wendigos are cannibalistic, it reminded me of the colour of blood. Her hair and dress colour also contrast against each other, and is a similar theme from Nathan’s colours – blue and red. I added some subtle green rim lighting, perhaps from a lantern, to contrast the lighting even more and make the painting less monochromatic.

Later I received a lot of critique and managed to make a lot of corrections. I tried to find a middle of the road as the critique I received, including anatomy correction and lighting, did not retain the same eeriness of the original. I moved the Wendigo’s arm, hunched it so it was leaning down, and made it hold onto a rock in a crushing grasp and the other clawed hand onto the tree. It feels much more grounded compared to before, and I heightened contrasted colours and improved on the lighting. I also painted Marilyn’s dress so that it flows better and is therefore more dynamic as well as correcting the perspective around her rifle. The Wendigo’s antlers now have a more bony texture, the face was vastly improved in terms of perspective, and it overall looks more slick and wet as well as having improved detail. I also later added a skeleton, improved lighting and fog, and contrasted colours further.

It is overall not a perfect piece, it is highly experimental, but I am very happy with the final in-situ painting and thought it turned out better than expected!

(Referred to in research in previous stage!)

(Continued) This moves us on to the body. I experimented with a more digitigrade approach, then a centaur like design, and finally settled on a quadruped design that could also potentially be bipedal if the Wendigo wishes to stand, although its shifted weight and bone structure might make it crouch as a ‘standing’ position. I felt if this were a transformation from human to beast, and its torso, legs and arms were burned off (inspired by Défago’s “feet of fire”), it would struggle and limp, needing to walk on all fours. This would also likely support its legs to run at the impossible speeds that Wendigos are known for. I made him look starved and his skin stretched uncomfortably tight over his muscles, and to reinforce the burned and grotesque, skeletal look even more, I decided to show the ulna/radius on his forearms and tibia/fibula around his lower legs while retaining some torn muscle structure much like the jaws – likely having been ripped from the fast pace of transformation and burst from pressure and trauma. I sadly had to look at photos of third degree burns on animals such as dogs for reference, but the things you do for research, right? I also wanted to show more bone and so I spiked up his spine that stretches into a short tail as well as exaggerating and pushing out his ribs to make him look bigger. Around the scruff of his neck/upper back, I was inspired by hyena fur on their backs, even though hyenas tend to hunt in packs and Wendigos are lone hunters. I tried to retain as much human appearance as possible as well as animal, and I am really fond of the final design and believe I achieved what I had envisioned well. Next was the final in-situ piece!

(Continued) To begin with this design process, I wanted to play around with face designs and develop them more so I could base a suitable body on the head. I drew a couple of initial studies of a human and deer skull, and developed them, finding a median and adding different aspects from the various skulls I found, such as tusks from wild boar skulls and teeth from polar bears. I also broke pieces off such as teeth and sections of bone to merge different skulls. In the end I decided to take more inspiration from a human skull that had been stretched out into a snout, hence the more human like teeth and nasal cavity. I widened the eye holes apart to appear more animalistic and made pieces of bone look cracked, broken and healed back together as Wendigos are said to be able to regenerate. I experimented with glowing eyes but I ultimately decided against it as the black eye holes looked more creepy. I wanted his upper half of his face to look like it had been burned and melted off, but his lower jaw to retain a more human jaw with a beard. Human and animal like muscle structures have also been retained so it made more sense and makes his bite seem more powerful, as well as adding a more fork like tongue. I added thorny antlers but kept his hair and added fur to his ears and neck to retain part of his original human appearance while still appearing as a transformed beast.

I visited the Norwich castle museum to see what inspiration I could find. I looked through the taxidermy sections, and was intrigued by the many animal skulls, including human skulls. Antlered stags and other animals with large horns, tusks and teeth caught my interest, and there was a huge ancient skull that belonged to an extinct species of giant deer on the wall above a doorway whose antlers reached over 2.6 metres wide. That was when I discovered I really wanted to design my version of a Wendigo.

The Wendigo is a mythological spirit creature from Native American folklore in North America. In a time when working together to survive harsh winters was encouraged and selfish acts of greed were a huge sin, communities would tell of an evil spirit that would possess a person their dreams, or the person would transform if they resorted to cannibalism. The creature would thereafter be able to live forever, growing stronger the longer they lived, but they were a outcast of their tribe and cursed with an insatiable craving for human flesh.

The myth served as a deterrent and cautionary tale but greatly inspired modern literature and media. Their appearance seems to differ between cultures, but they are typically described as this: “A man-beast towering 15 feet (4.6 meters) tall, the Wendigo’s malnourished body sported glowing eyes, dog-like teeth, a long tongue and no lips. Its grey skin sagged off its skeletal frame, which smelled of decay. Some accounts give the Wendigo antlers, and most describe hands and feet with dagger-like talons.” Some accounts also describe the Wendigo as having pale yellow skin or hair, and glowing eyes.

Algernon Blackwood also wrote a novella called ‘The Wendigo’, which was published in 1910. In a scene during the main characters’ search for their guide Défago, during transformation as he runs out of his tent, he cries, “Oh! oh! My feet of fire! My burning feet of fire! Oh! oh! This height and fiery speed!”

I decided I wanted to experiment with all these ideas, but wanted to draw out some thumbnails first that could be scenes in a film, also drawing some typical Wendigo like creatures and monster designs in compositions inspired by Blackwood’s story stemming from cosmic horror. On the top right, the lake is inspired by Lonesome Lake in the White Mountains National Forest, which is also in North America. For an in-situ piece, I liked the bottom middle thumbnail because it looks like it could be in an 80s movie scene, and the character added to it gives it more context. The girl is also holding a rifle and standing behind a tree to hide and protect herself – Wendigos can be killed if pierced in the heart with silver bullets, and the body parts separated and buried in various locations. At first I wanted to design an 80s movie poster – however, I realised these posters tended to obscure the monster, and I wanted to show off the creature, so I thought a cutscene-type in situ might be more suitable. Of course, to show the Wendigo, I had to design it.

Adobe Photoshop
Report This Project
Recommended
for You