I got into battletech by mistake, now it's time to use it as an exscuse to do something useful with my time -- 3D models of mechas, tanks, ect unless mentioned and evidenced in the logs have been gathered from elsewere and I DID NOT 3D MODEL. Models can be found here http://3dmag.org/en/market/tag/Battletech/page2/

Small Update, Started Blocking out the first scene, and getting the major keyframes set up for it, as well as preparing the blockouts for the civilians and soliders (Currently  Blocked Out with Models from Mixamo - Where I also plan to get better looking models for the humans) 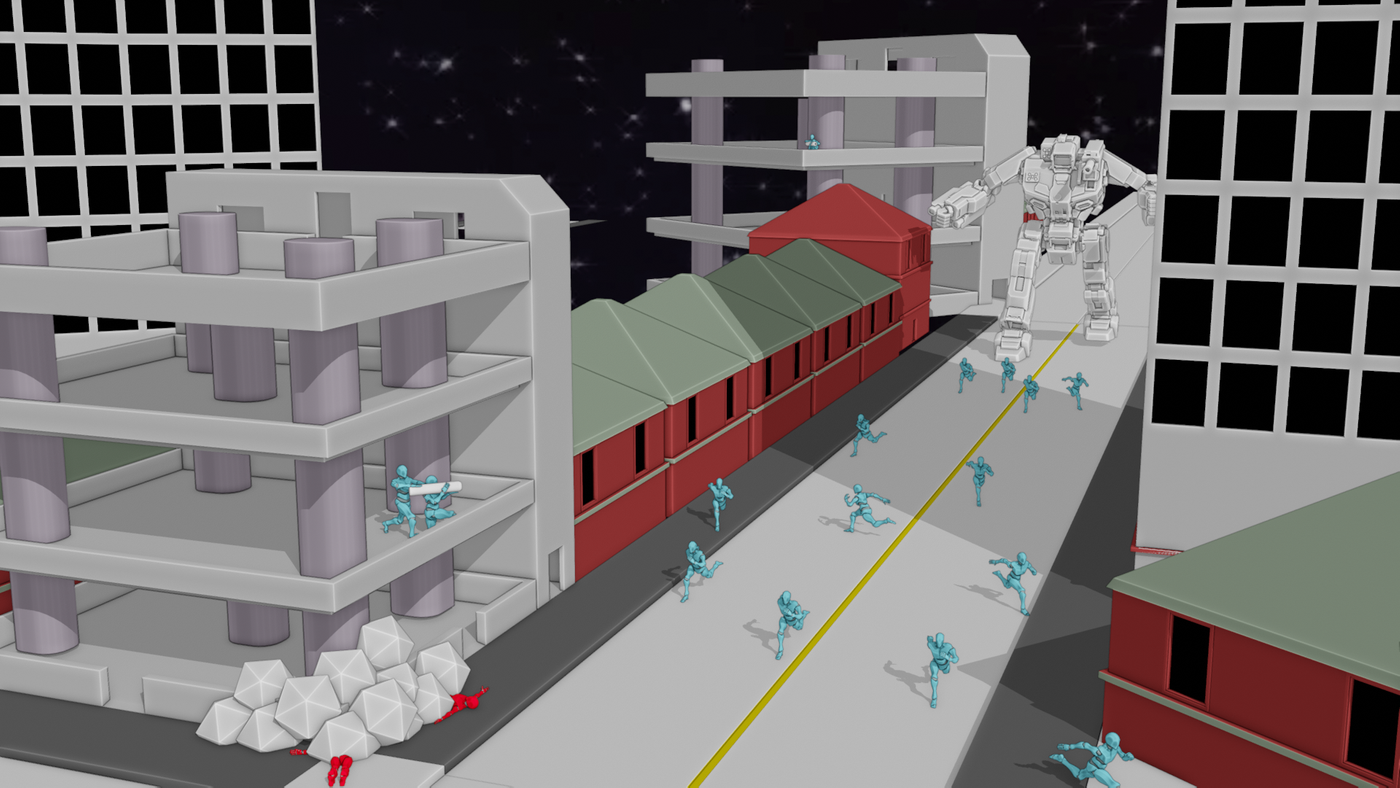 I've spent a few days working on rigging and animating the Shadowhawk mech. Currently I have split the animations across several NLA tracks in order to allow the animations to be played in sequence once it is brought into the unreal engine to add effects.

The Shadowmech has the current automated features within the rig:
Twisting the primary spine bone turns the pelvis to provide a more realistic turning action
Alpha Strike bone can be moved in the Y Axis in order to fire off all the balistic weapons (Other than missiles)
Hand IK's
Leg IK's (Borrowed the idea of foot platforms that 3ds max uses in the CAT rigs since I really enjoy using those in animation comapred to the plain bones)
Missile Rotations (As the missile bones move, they spin at a rate based on the speed the missile itself is moving)
Missile Directions (Each missile has it's own controller that it targets as it flies, to control direction and end location, but also a primary controller that is used to move all the individual missiles at once in the common case that the missiles aren't needed to spread so far, and to allow animation to occur faster.) 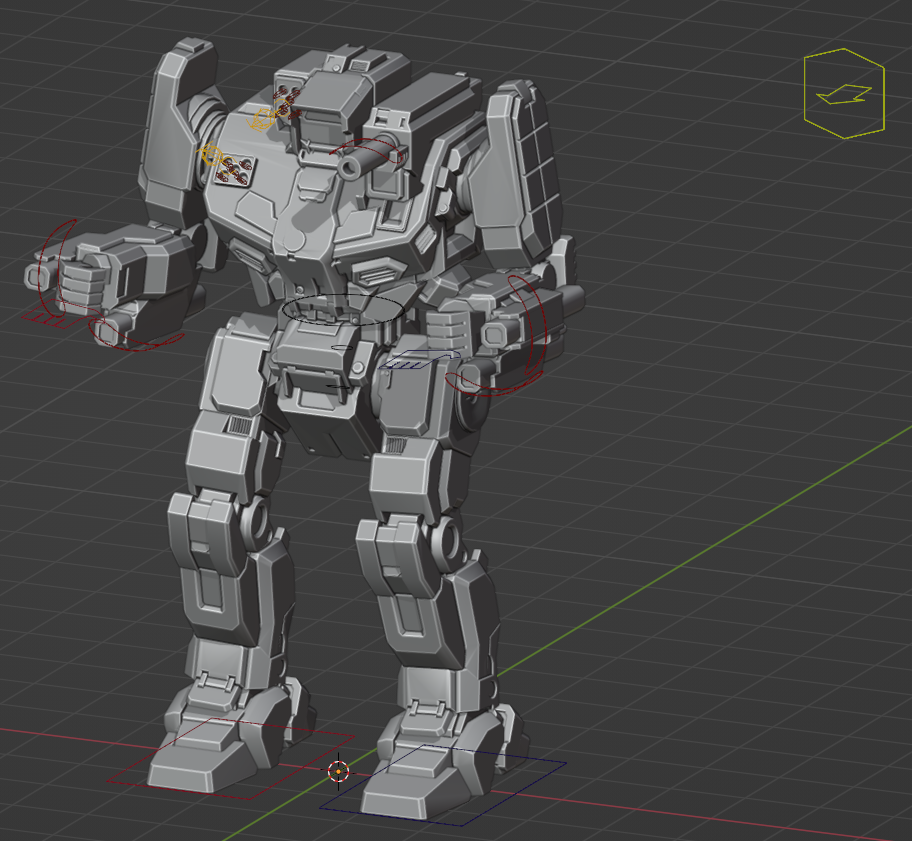 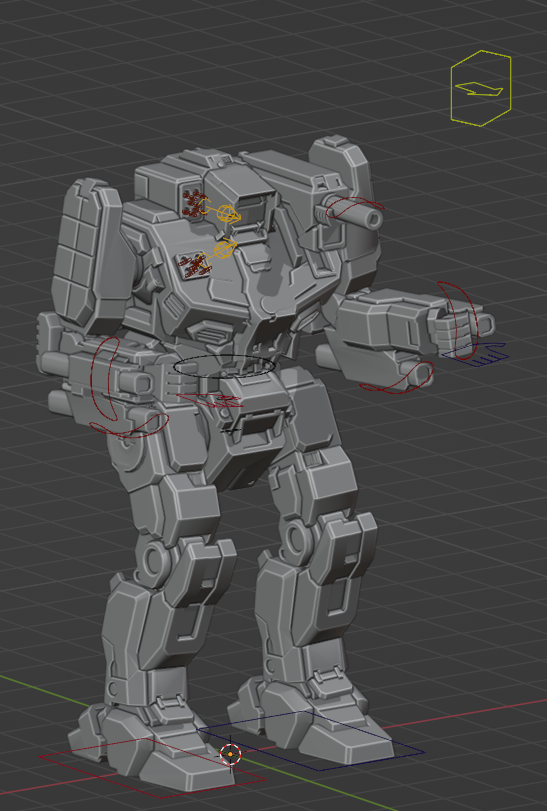 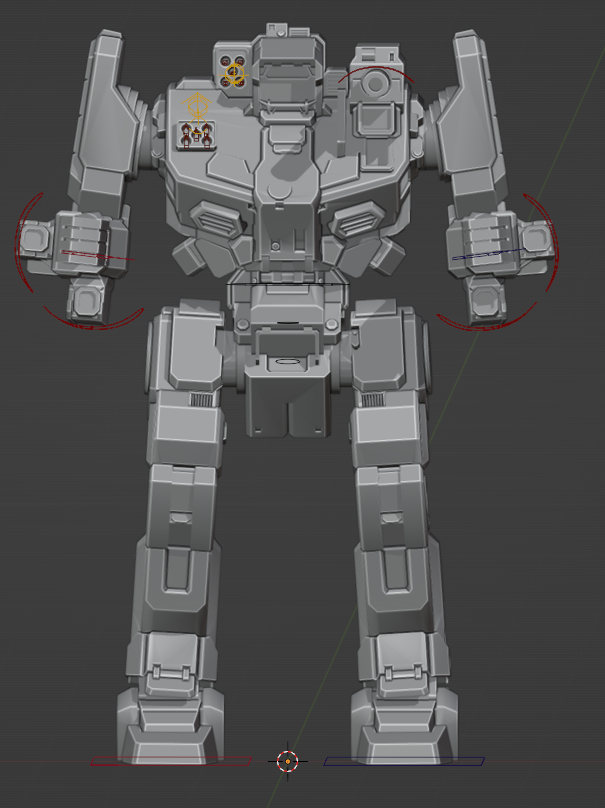 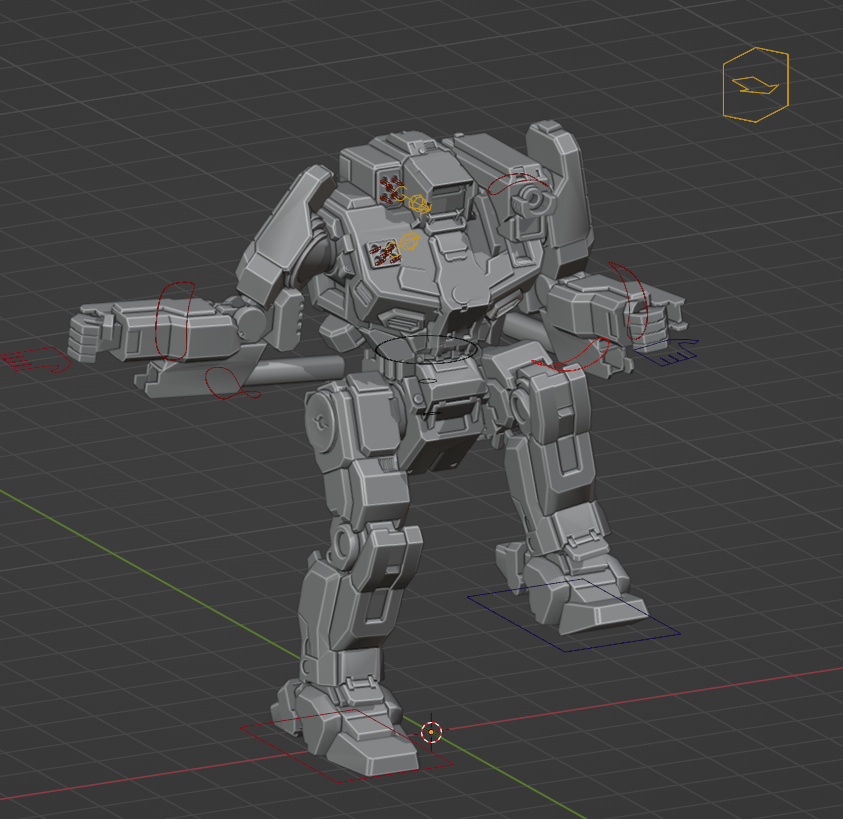 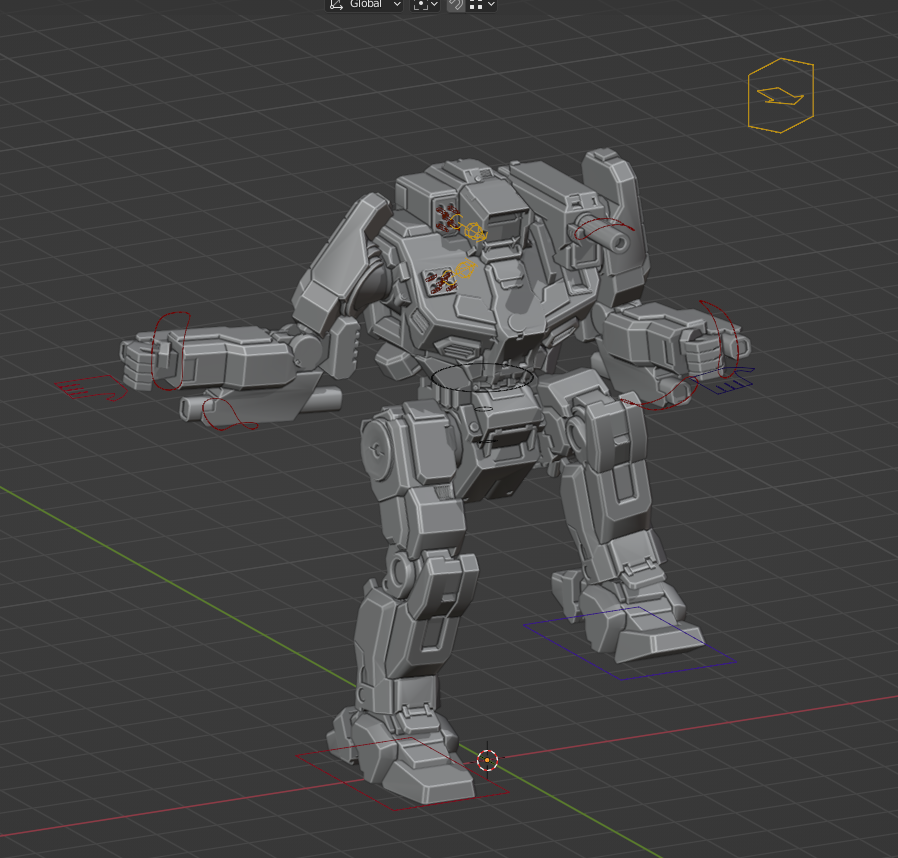 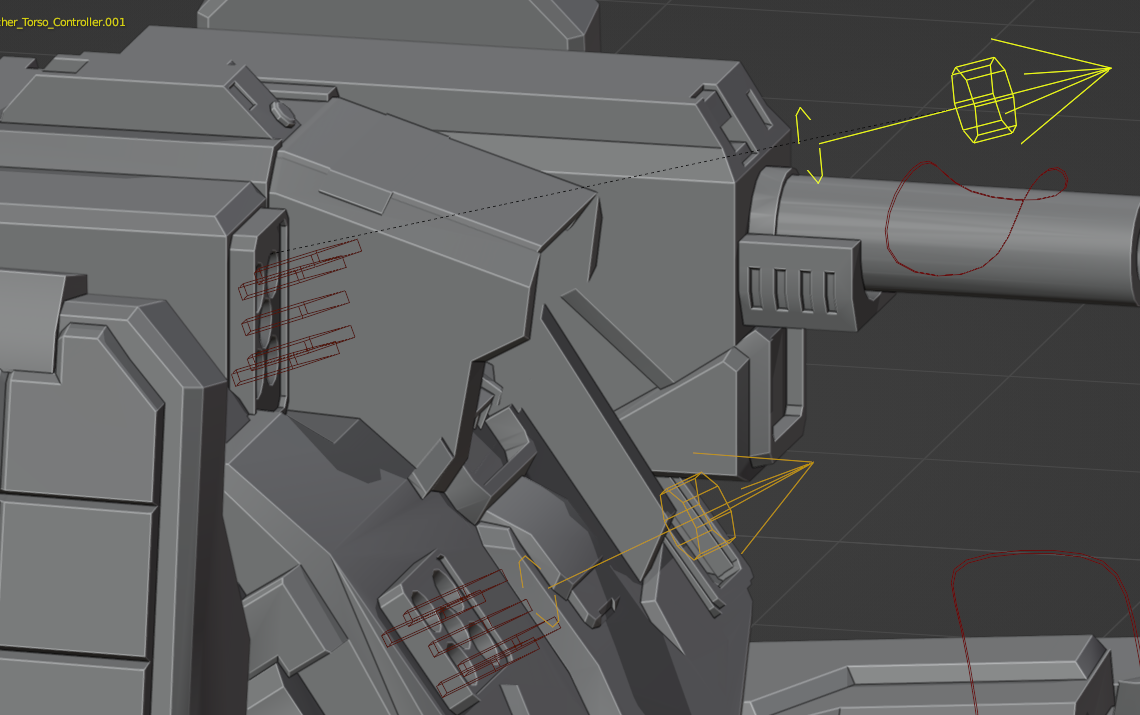 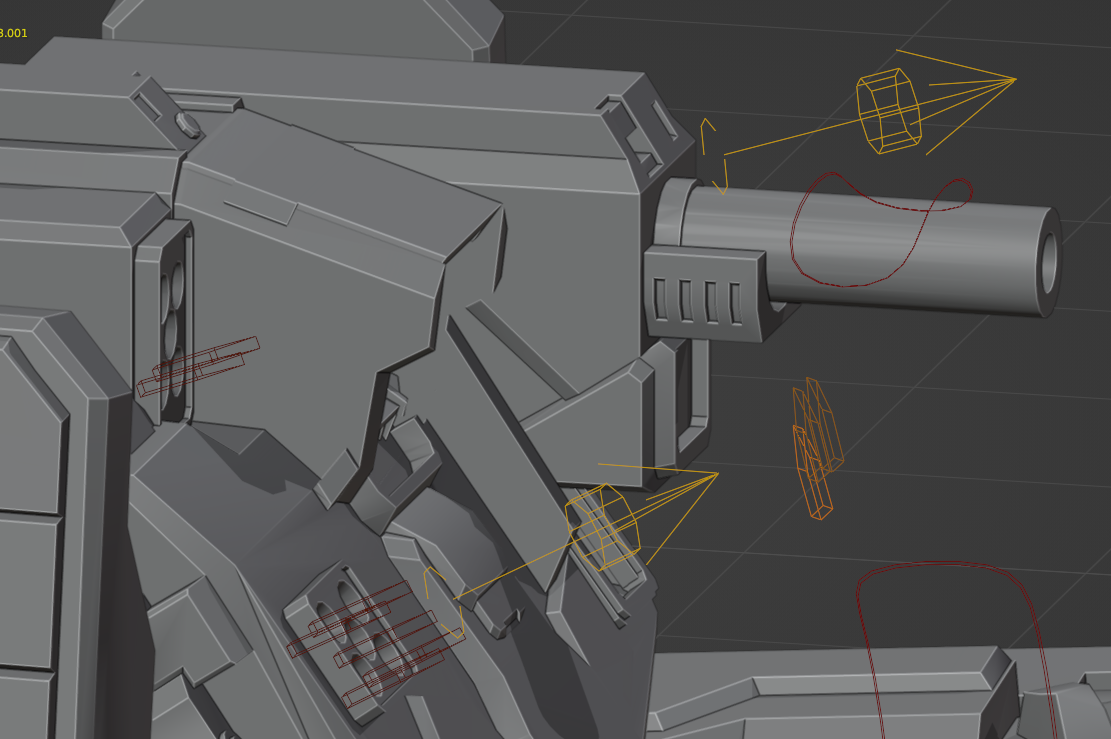 My Run Cycle needs a lot of polish, mostly in following through in the momentum as its feet hit the floor and continue the follow through into slowing the mech itself at the apex of its arcs.

In Addition I have Cleaned up my Thor's (tank's) wheels recently. This has been primarilly done by increasing the verts avalible to the floorplane and improving the projection settings to avoid the massive jumps. In order for it to mount larger objects though the main body needs to be moved in the same way it would be expected to normally and the wheels will automatically move into appropirate positions. 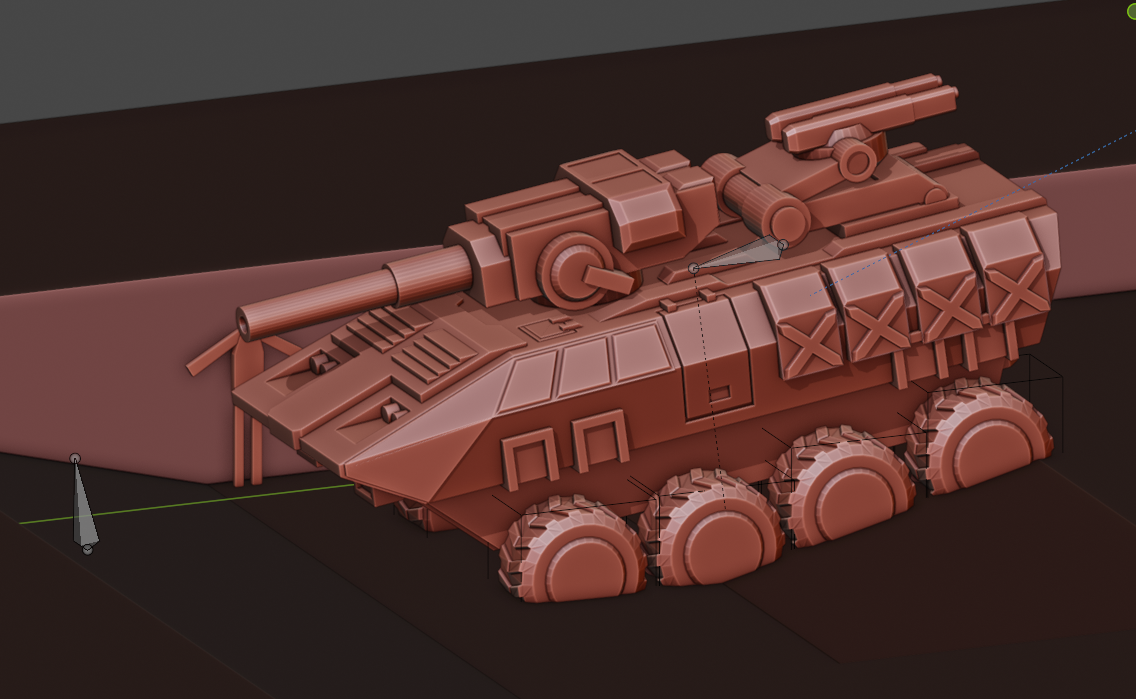 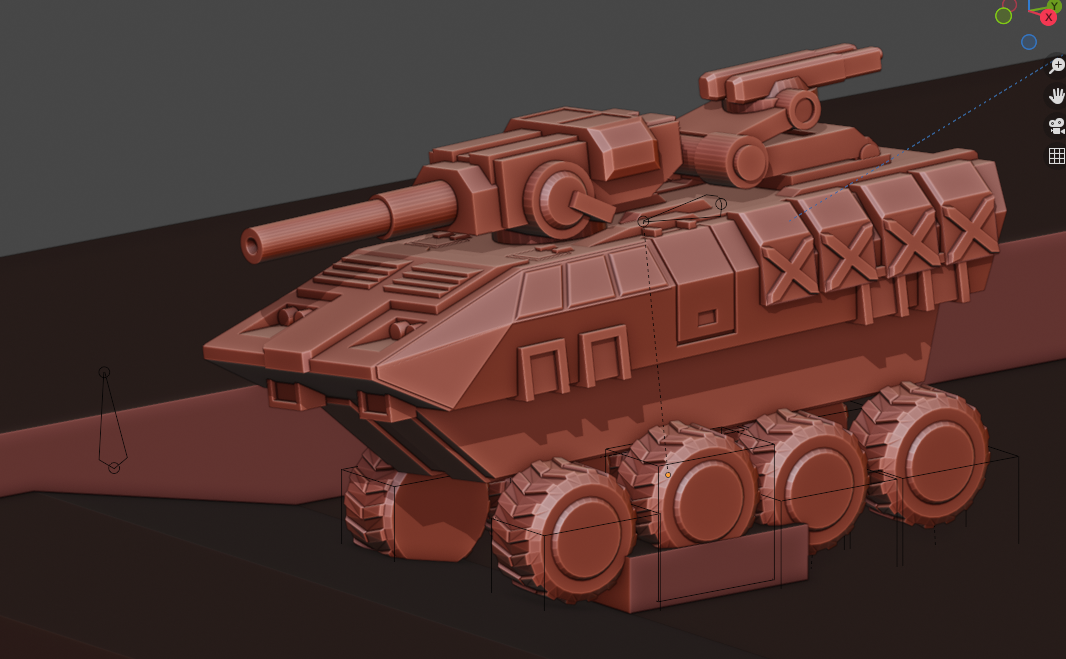 Finally got the vehicle rigged in a somewhat sane way. Initially I used a series of drivers to link the wheels movement so the faster the vehicle moves in the Y axis (Locally), the faster the wheels go. Now, I have used an object constraint on each bone in order to ensure they spin properly (as I had a few times where the wheels would go nuts as I reached a corner instead of slowing down) -- I also used this tutorial to debug a few issues I was having with my constraints and methodology as I have never approached rigging a car before. (along side a few others, but this was by far the most helpful in terms of working out where I was messing up) to fix the wheel suspensions.

Initially, the wheel suspensions were controlled by a flattened helper/empty that was attached to the bottom of the tyre, using (initially) the shrinkwrap constraint to hold it to the surface of the obstical course set up. The issue this had, was on large depressions the wheels would skip and jutter like no tomorrow as they kept finding a better/closer position to put themsleves in, leading to a lot of wheel skipping. Which looked horrific. AFter that failed I tried using the "floor" constraint to avoid it clipping through the floor, at the cost of having the vehicle sit slightly lower than it normally would, which was no issue to me. This had a rather.... Unforseen effect. 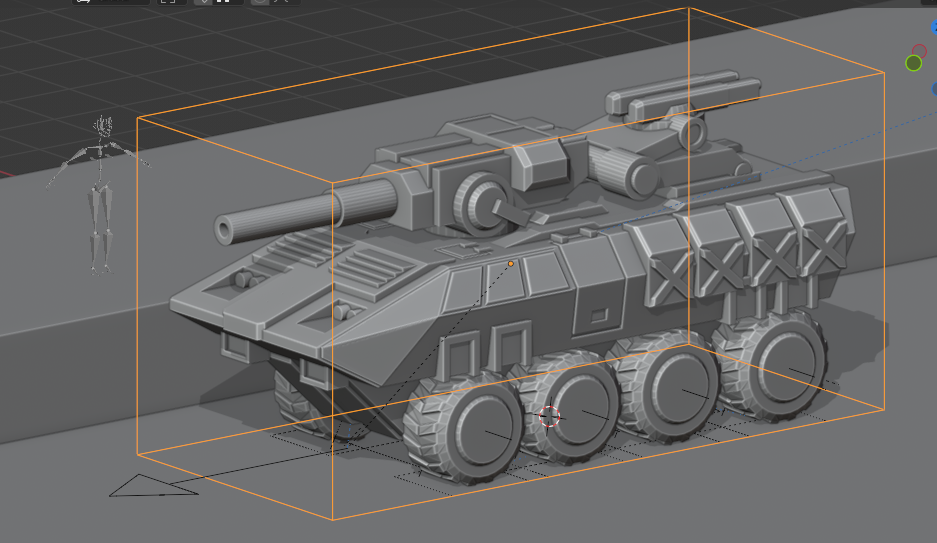 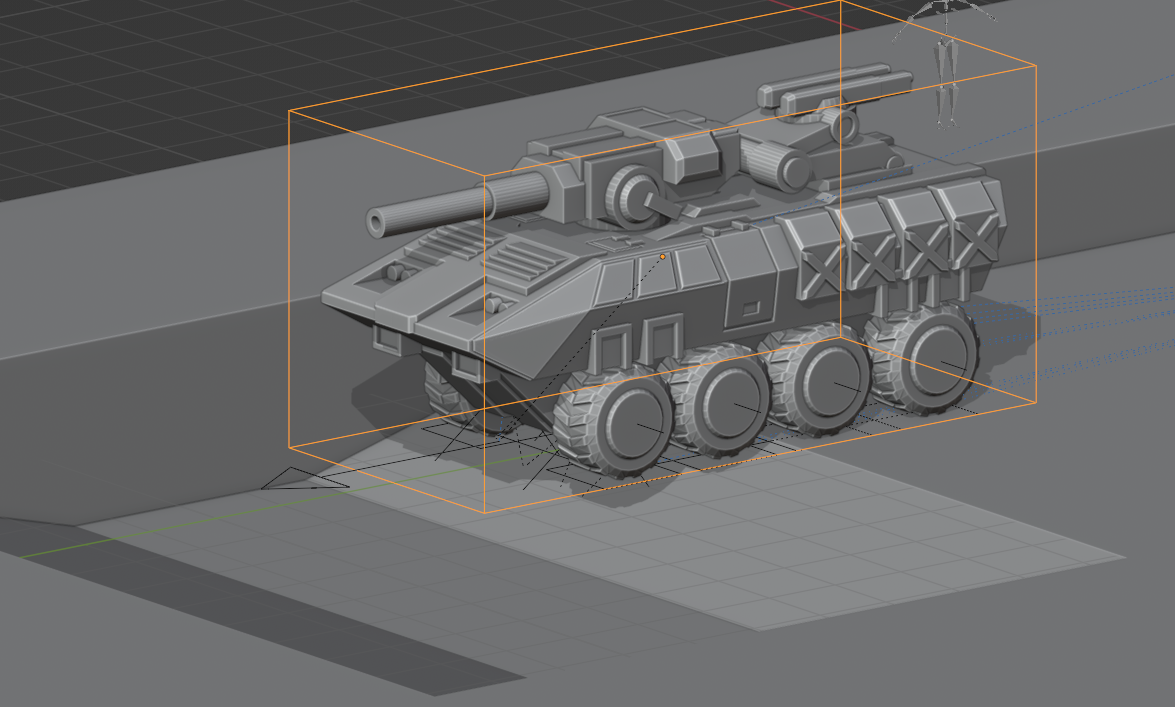 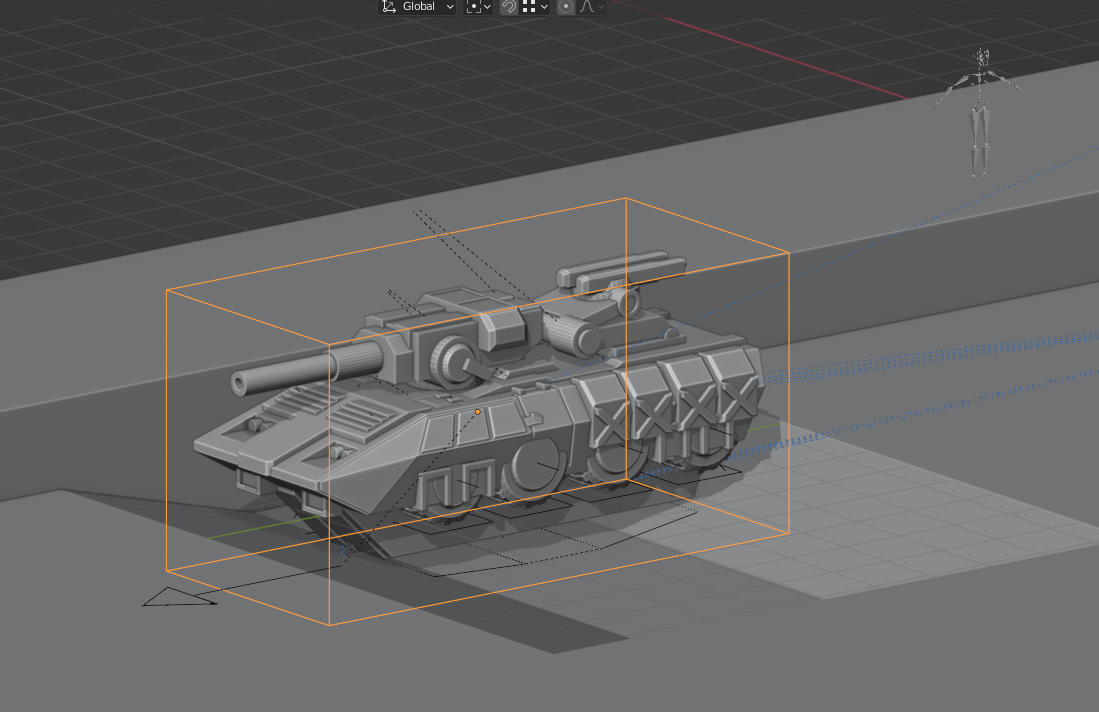 It appeared that the "floor" constraint didn't take into account the adjusments to the mesh and only went off of the origin. I did attempt adjusing the offset, however this lead to the issue where the tyres couldn't go over objects and instead had issues trying to keep them from clipping through the floor as you had to set the offset to the LOWEST depth the vehicle would drive over, which was redundant when the wheels wouldn't intereact with the terrain until it hit that lowest point.

After all this, I finally got to the tutorial, and following its instructions I have gotten my rig most of the way to tracking the floor properly, currently I am sorting out issues in the range of motion of the wheels as well as the tracking of the plane to the floor. I am aware there are addons for blender that would solve this problem for me automatically, but I am doing this to learn, so taking the quick way out feels like cheating.

Above is the first run through using exactly what the tutorial did, for some reason it came out nowhere near as well, so after soem debugging I have managed to improve it to a point that I would call mostly functional. It is tracking the floor well, but not well enough (The Plane that is used to more accurately track the location of the floor and feed that through some helpers/empties into the bones is not tracking it as closely as I would like.)

This can be seen below 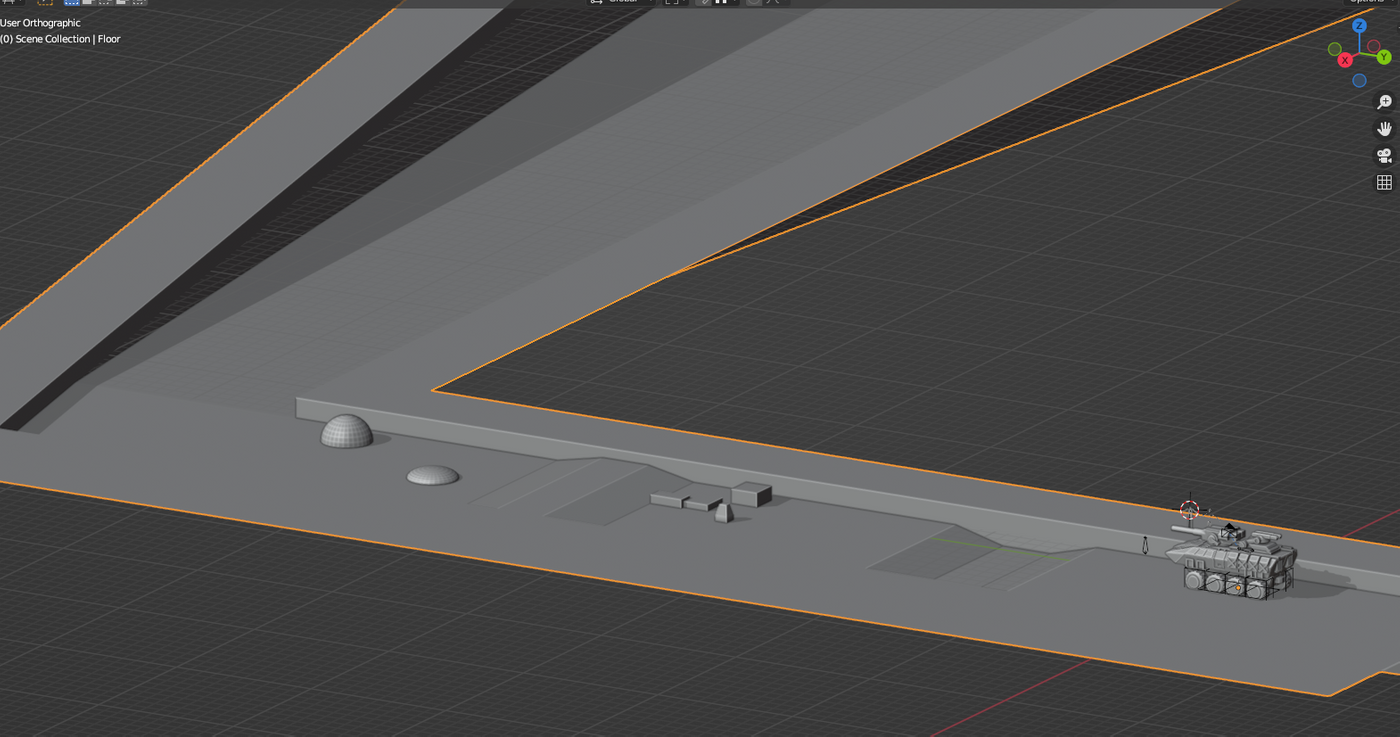 The Current Playground I am using to test the functionality of the turning and the traversal of the rigs I will make for this animation.

IMPORTANT -  I realise that I didn't mention it in the first postings, so I need to ammend this, I have not made the Mecha or the Tank, these I found on the internet (They were in STL format, so I am assumsing were ripped from a game and intended on being used for 3D printing) - The Website I found the models on can be found HERE

Recently I've gotten into battletech (Mostly out of accident, got swept up in the movement of the "40k Refugees" who went to Battletech), and now I'm loving it, I wanted to do some non-university work, so I will be posting a play by play of my work on my battletech animation, going from rigging to animating to effects and framing shots in unreal. 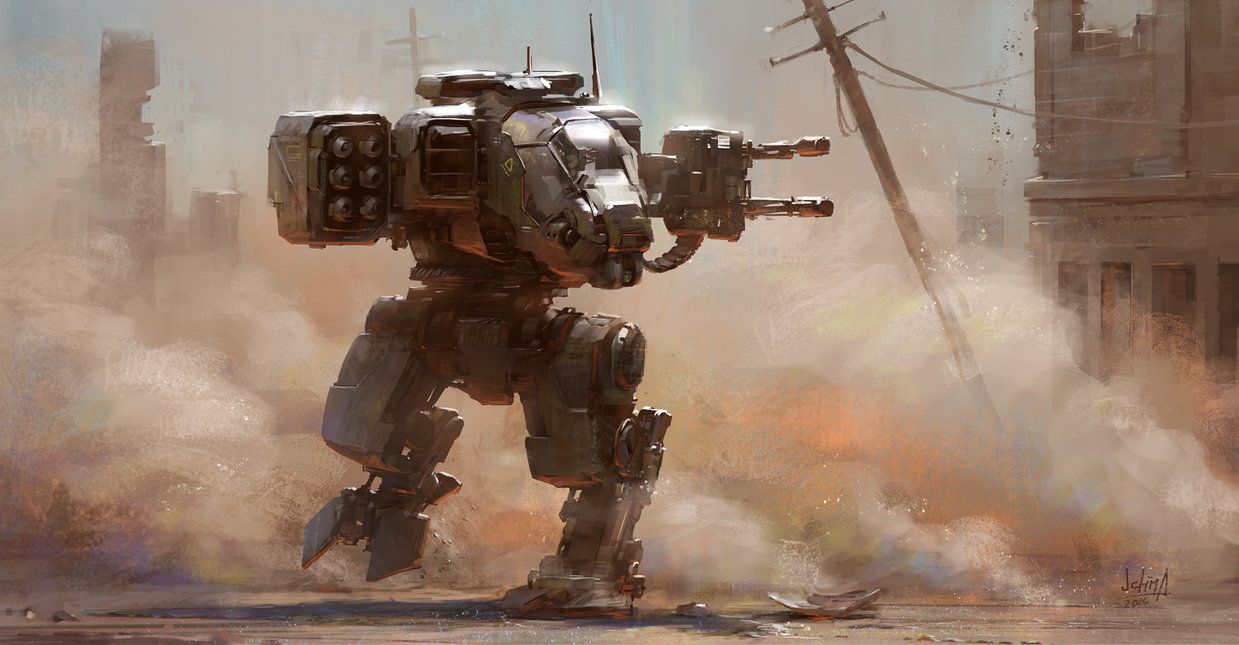 For the animation I only have a vague idea of what I would like to do, as I will need to work within the limits of my own ability as well as needing to find references to take inspiration from. Right now, my plan is to have the tank pull up on the mecha whilst it is torching the inside of a building to clear it from infantry (Far shot over the tanks shoulder as it looks up at a 9m tall mecha), then have the mech turn and them start fighting.

In order to develop this plan, whilst I am going through the process of rigging, constraining and setting up drivers I will be doing research using series such as: "Gundam", "86", "Knights of Sidonia" and so on. Mainly trying to figure out the characters movements, any timing standards they use (Such as the 8 frame walk cycle ect) and how the animators have used the limitations in range of motion in their robots to give them their own unique personalities.

To start off with, I begn with an armoured vehicle, my primary goal being to have an automated suspension system that will work for both depressions and obsticals in terrain. This will make the animation process far easier when I come to do it, and will mean that the wheels will naturally respond to the debris on the floor.

Once this has been made to jankilly work, I plan to refine it whilst rigging and setting up controllers and drivers for the Mecha that it (along side a bunch of copies) will be attempting to fight. 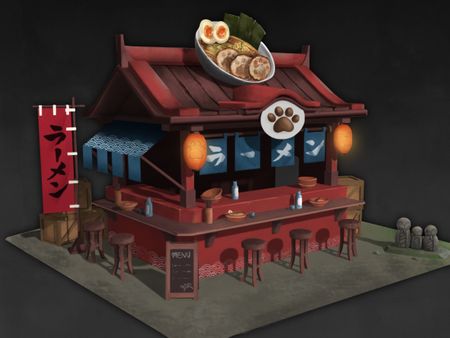 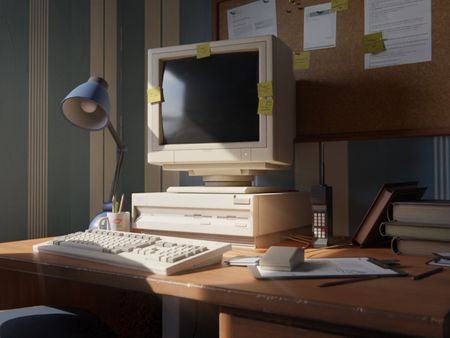 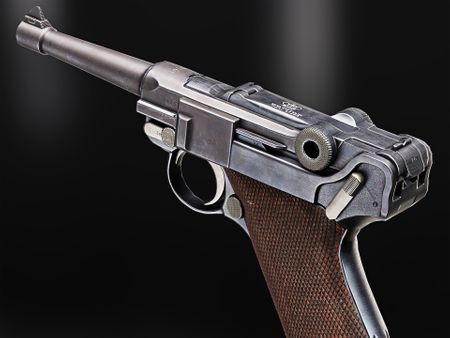