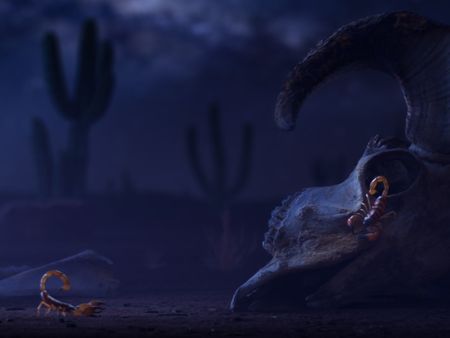 This project was a collaboration with Jacob Döhner who did an amazing job on the animation of the scorpions. I was responsible for layout, lighting, lookdev, compositing and the texturing of the scorpions.

Getting started I Preparation and Layout

The initial idea for this project came when I saw that CAVE Academy were offering a free scorpion rig on their website. I remembered that there was an animal skull among Quixel’s Megascans and that sparked the idea of a scorpion crawling over a skull. The idea of two scorpions interacting with each other was actually developed later in the process.

When I started blocking out the scene, it actually looked quite different from the end result. The ground initially had a lot of uneven ground and hills, but after looking at more real-world reference and desert photography and decided it would be much better to have a flat ground, reference-wise and aesthetically. I began to place and scatter some assets I wanted to use around the scene but it ended up being way too much and distracting so later I reduced it by a lot.

As I initially worked with only one scorpion, I tried to place it on one of the thirds. Even though both scorpions are moving, on the ending frame of the first shot, we tried to have each on a third, at least on one axis.

The curves and shapes of the skull served as good guiding lines and helped to draw the viewer’s eye to the scorpion in a natural way. You can also find the curvature of the skull again in the scorpion’s tail, which made them work well together.

From the beginning on, I thought a second, close-up shot might be nice for this project, so we added it. We implemented a similar layout on the second shot, again, having both scorpions on thirds at the end with the skull connecting them visually.

The Surfacing I Shading, Texturing and Lookdev

Since CAVE Academy only provided the model and rig, I had to do the texturing on my own. As I didn’t think I’d need a specially painted displacement map this time, I started to paint the base color in Mari right away. I tried to find out the characteristics scorpions have and to implement them into the base color, like the color changes on the torso.

I picked several base colors from my references and combined them using different procedurals to get a good color variation to start with. I did the same for every other color I added later, so I don’t have solid colors that would look artificial. I added other elements like darker edges on the shells and the tail segments, layered multiple dark areas on top of each other and added some details on the claws and tail.

For the bump map, which I later decided to actually use as displacement instead of bump, I simply combined some noises with different frequencies together, their strength depending on the body part, as not all parts are as bumpy as other ones. The only other map I painted was a sss weight map since not all body parts share the same amount, especially the parts with the shells on top have a way lower sss weight.

To have proper control during the lookdev, I also exported several masks which allowed me to change colors and values. For this project, it was again important to find the right subsurface scattering amount. This was quite challenging because it was different for each reference, so I tried to find a good blend. At first, I didn’t feel the need for a roughness map because the displacement broke it up quite well, but later I decided that it would give it a more organic look to add some kind of roughness map to it – an efficient solution for this was to use a noise inside Arnold which I modified a bit. I lowered the contrast and found a good scale but what really helped to make it more organic was to raise the number of octaves and bring in a good amount of distortion - this made the noise more defined and less uniform. 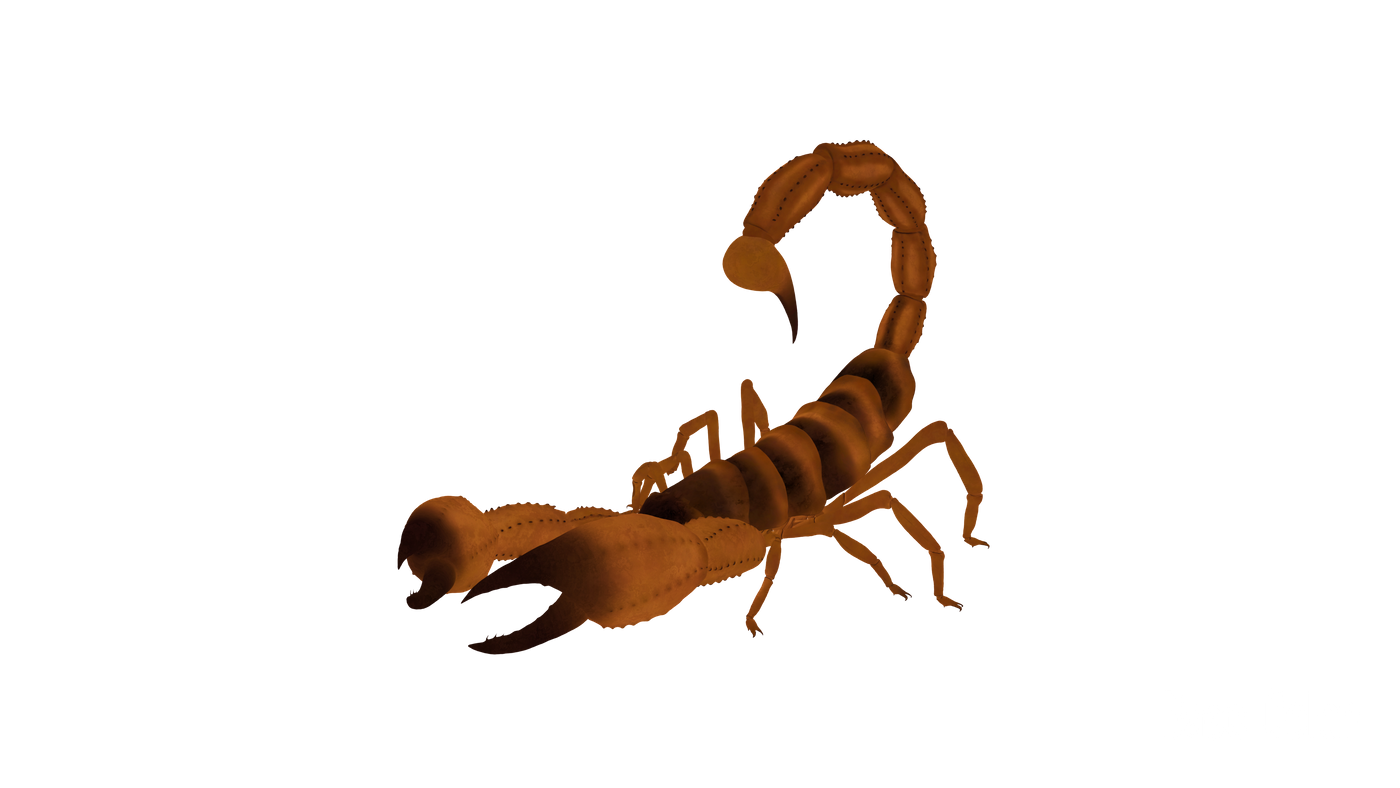 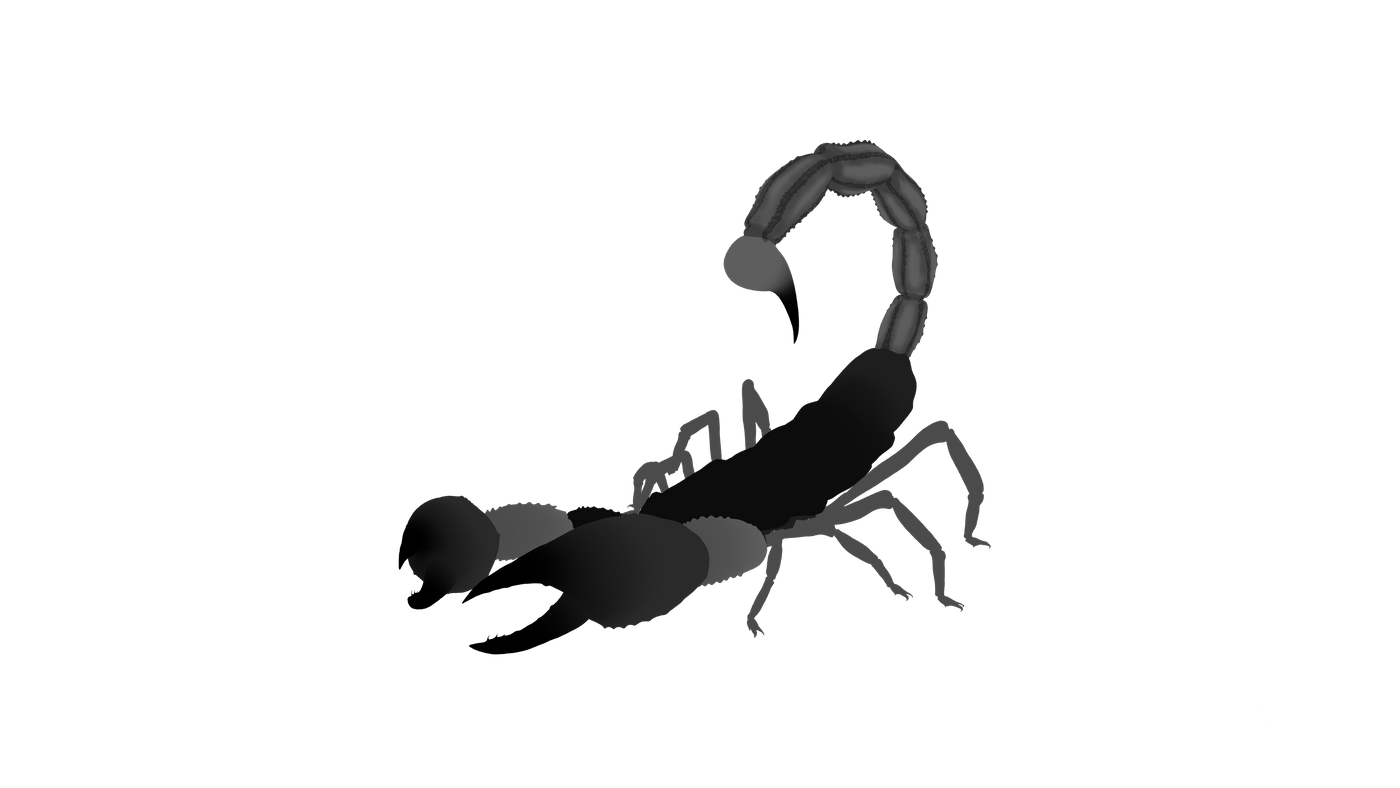 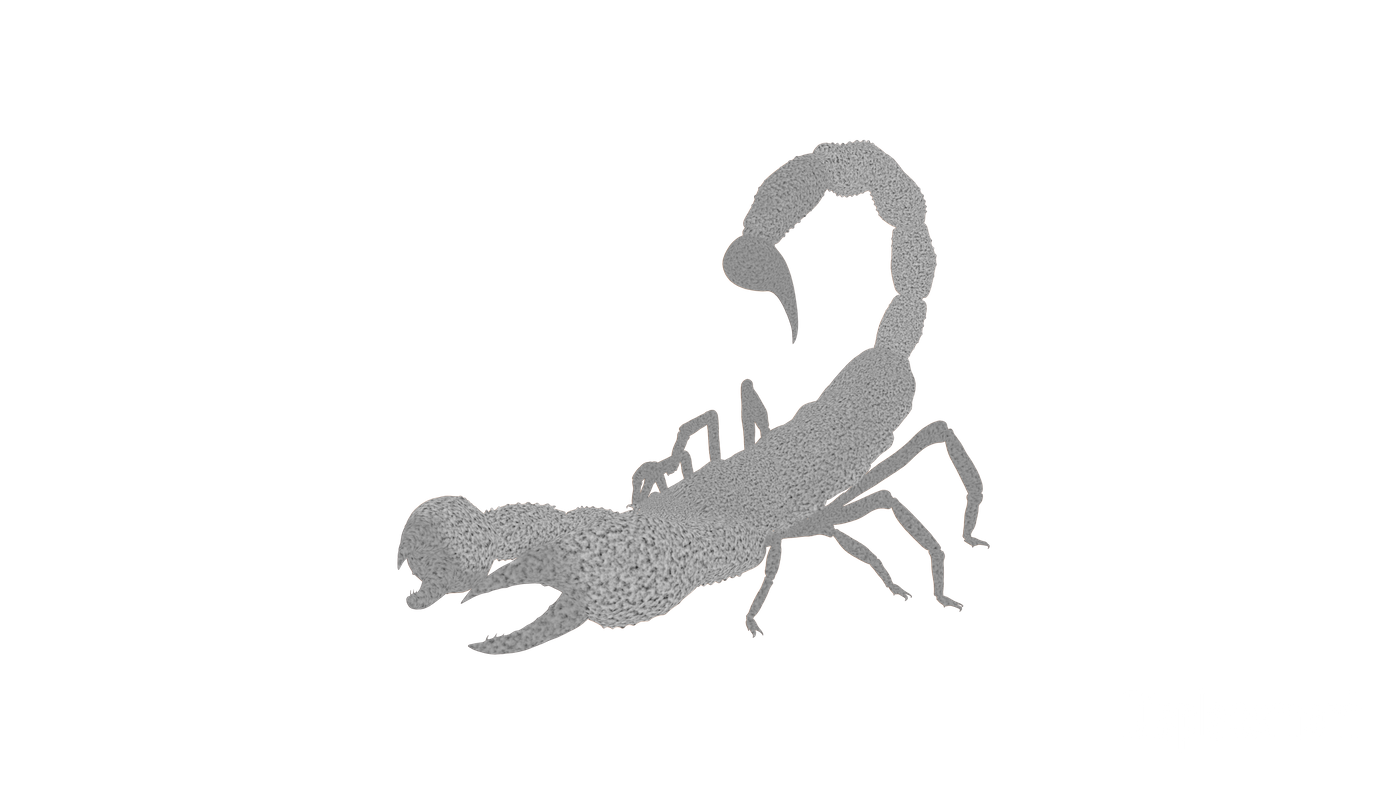 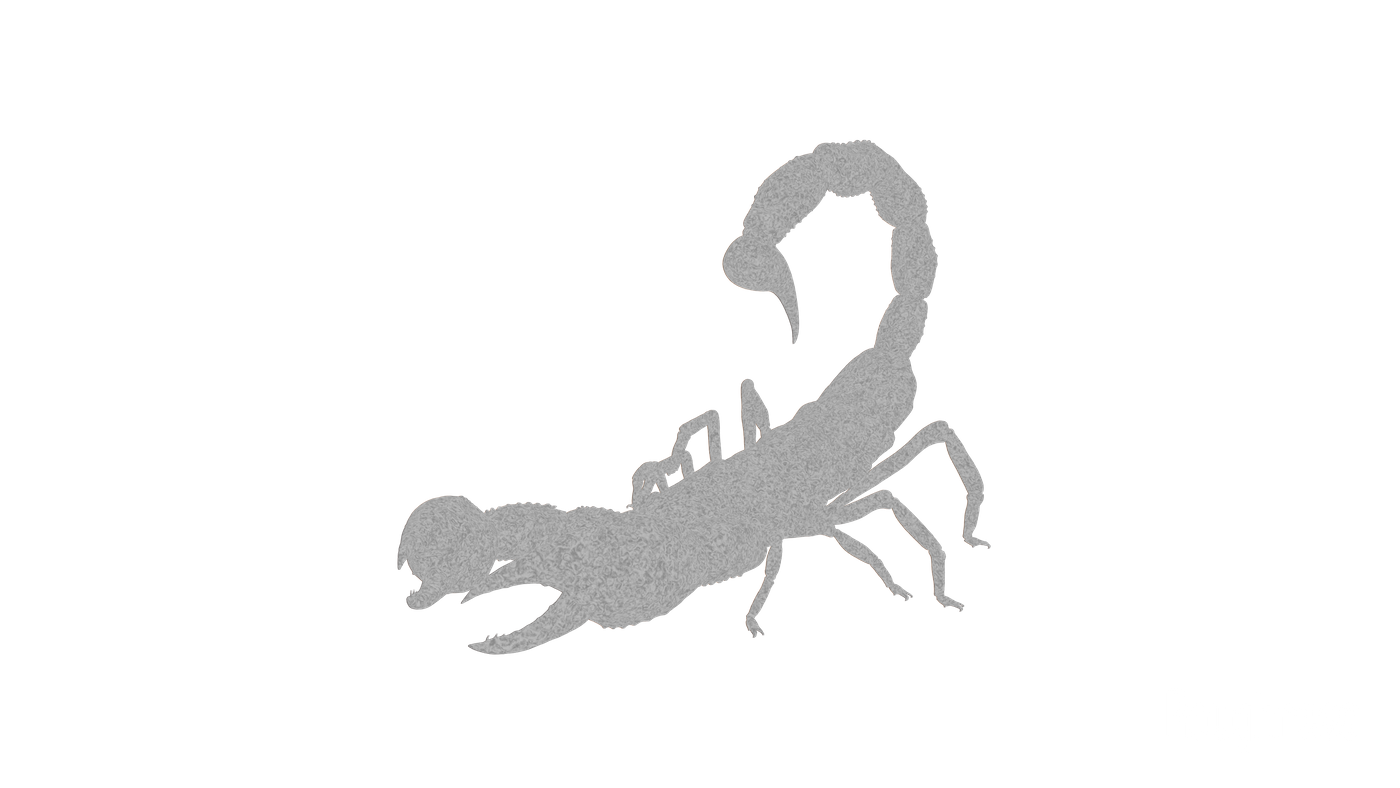 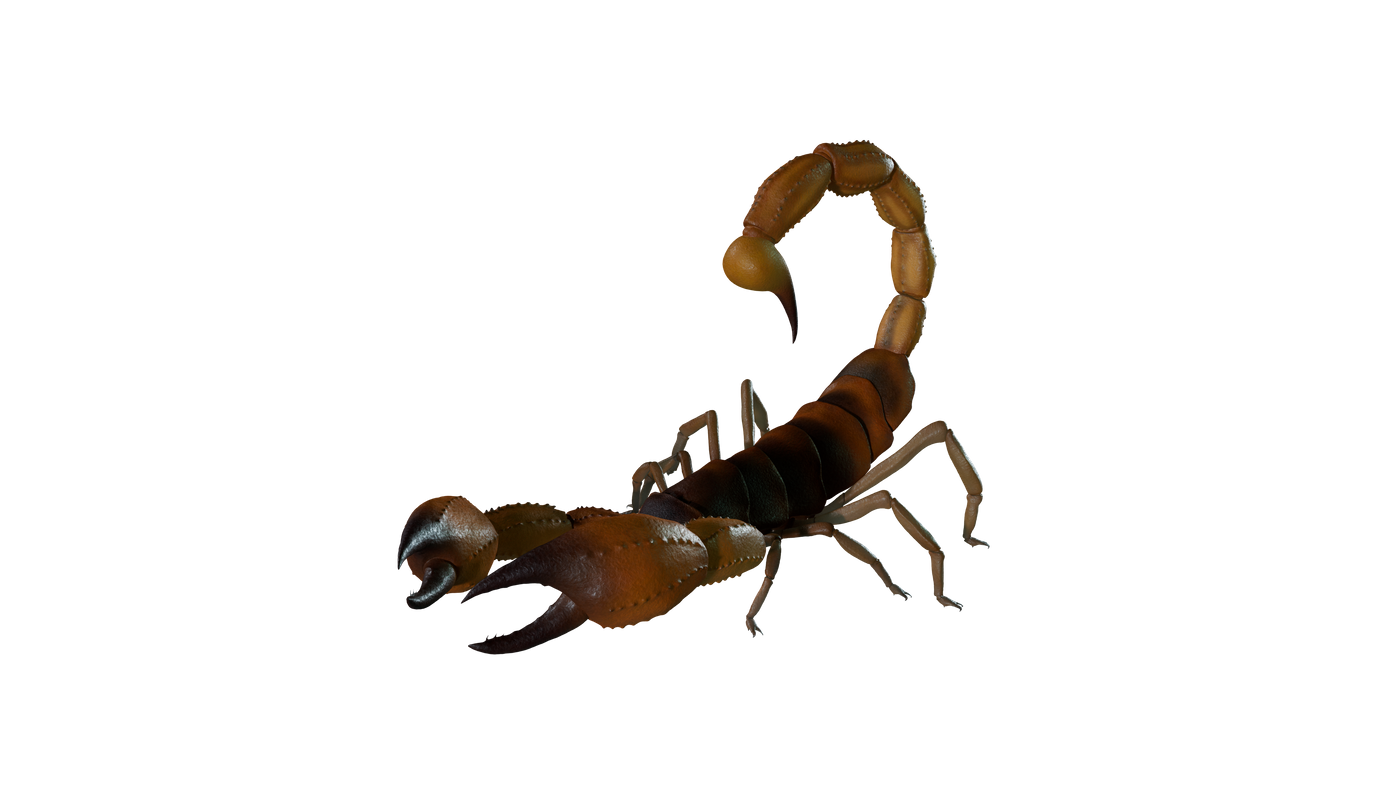 Something that was relatively new to me on this project was the grooming part. I used XGen interactive grooming to create hair all over the body. I roughly adjusted basic parameters like the hair width, density multiplier and overall scale. Then, I used the density brush to remove the hair on parts where I didn’t want it to be and make it less on some other parts.

I collected some more references with a focus on the hair and adjusted everything to match it closer. I also added a noise modifier to bring a bit more breakup into the shape so they don’t all have the same direction and look too uniform. I used the aistandardhair shader which gave me good controls that are specific to hair. I decreased the melanin and increased redness and roughness to get closer to the reference. Also, I used taper to have the hairs thinned out at the tips so they look more natural.

The lighting process for this project was long and challenging for me. It actually started out very different from what it actually ended up like at the end. My initial plan was to create a hot desert scene where you can really feel the sun burning, so I started by taking the lighting in this direction. However, I wasn’t happy at all with how this came out – I felt really limited with the lighting to not create a too artificial or staged feeling, it was really hard to bring out the scorpion with all its orange and brown tones that were so similar to the colors of the environment and above all, it was just too similar to my other projects. So, I turned everything upside down and made it into a night scene.

I started with a key light facing the skull to make it a bright spot the eyes would go first. I also tried to give both scorpions rim lights to separate them better. Nevertheless, this first attempt didn’t work very well as the focus was immediately drawn away from the scorpion to the bright spot on the skull.

So, I did another take on the lighting. This time I tried to use the lighting mainly to bring out the shapes and details of the skull, without creating areas that are too bright. I used an area light coming from the left side to mimic moonlight shining on the ground which was a good way to show the way the screen-left scorpion is crawling as well as to have it bright while doing so. With the use of a spotlight, I tried to light up the area where the screen-right scorpion was located a bit. Again, I used rim lights to emphasize the scorpions and shape them nicely. It was a lot of trial and error to find the right positions for the lights to not influence too much and to avoid a flat look, especially on the skull.

I also added some rim lights to the skull, especially to the horn, to lift it up from the dark background. To fill up all the dark areas I added a soft skydome and another big, soft area light for the environment as well as a soft bounce light for the front side of the skull. To have the moonlight more implemented into the scene, I added some rim lights to the cactuses.

As this was the first project for me that consists of more than one shot, it was also the first on which I had to pay attention to continuity. It was a bit challenging for me as the scorpion needed to keep the focus at all times, even though it’s moving, without having areas that are too distracting. In Nuke I had to check that both shots work well together.

Since most of the materials and especially the ground are very reddish and warm, I tried to have the lights as cool as possible and push the blue values in the image. This was an artistic choice I made and had the effect that the scene went to a more stylized than actually realistic look as in the real world the ground would keep its yellowish/reddish color. However, I didn’t like it this way as it didn’t feel as integrated to me.

I also added an atmosphere volume which was influenced by the light coming from the left. Its direction helps to guide the eyes to the left scorpion.

For the compositing, which I did in Nuke, there wasn’t anything special needed. I projected the background, graded lights and objects, adjusted some values and did some small changes to make it more realistic.

This was also the first project on which I got to try out pgBokeh to create depth of field. At first, it was a bit tricky to figure out how it works as there are almost no resources online, but luckily a friend helped me a lot to understand the workflow. This showed me again how essential it is to exchange experiences and talk about techniques with other people. The result pgBokeh gave me was really great and it was nice to have physically correct depth of field and to still have the flexibility to change things. So, I created another pass to render only deep data which I then could use to create the depth of field.

However, a problem that came up was the fine hairs that disappeared beneath the strong depth of field. To solve this, I rendered the scorpions and background on separate render layers so that the hair doesn’t get blurred.

Overall this project was a great learning experience for me as it had several elements that were new to me. I'm glad about the knowledge I gained and I'm eager to learn more and get better.

I thank to thank Jacob Döhner again for the amazing work he did on the animation and all the ideas and support he brought into this project. 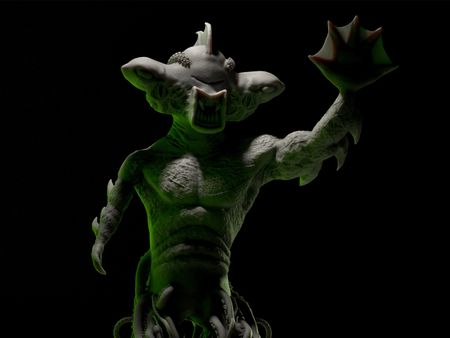 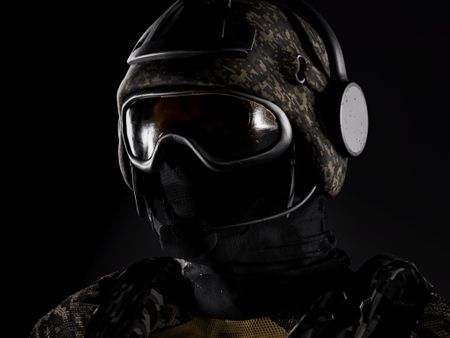 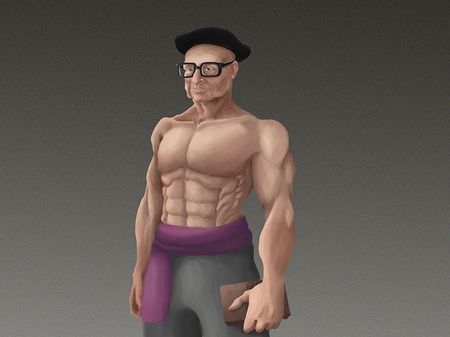