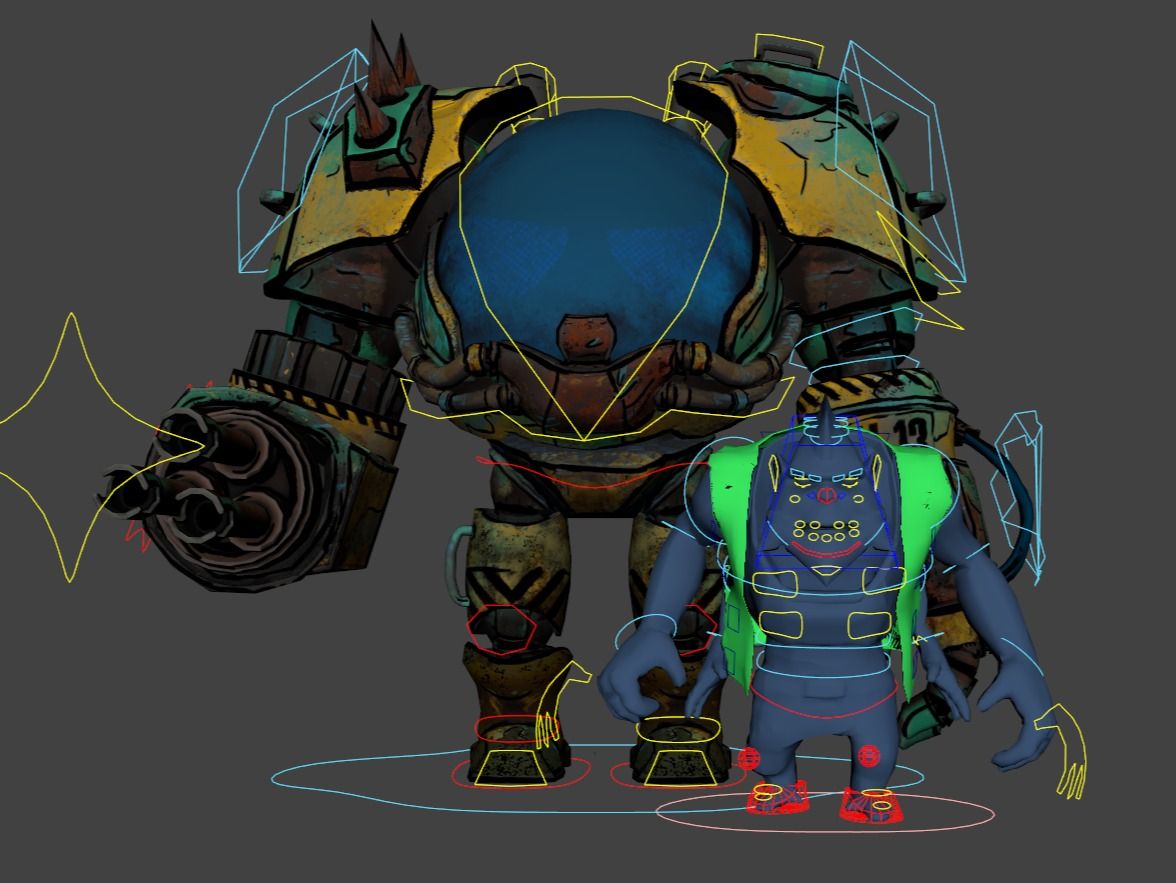 This post is a rig breakdown of the work I've done on the game Planetary Pest Control.

Within this post I will be summarising the Rigging and animation work I accomplished for my teams game Planetary Pest Control. I have attached a Show reel with a preview of the work i created, how the rigs controls function, how they appear within engine, and extra experiments i made during the development process.

There is a few things not covered in my rigging reel below, so I've added some information here to clear anything up that's been missed!

Please have a watch and see what I've made as well as my team!

Experimentation and the solutions that came from it

During my time working on the game as the Lead Rigging artist / Animator I had to find solutions to new challenges set before me, going back a year, I had no knowledge of hard surface rigging, rigging quadrupeds or adding extra functionality to basic rigs e.g. Armour controls for extra movement, detachable rig pieces such as the mini gun and armour, IK FK switching from scratch, things like that.

But that didn't stop me from taking a challenge and finding some cool solutions to these problems.

One problem we had was to allow the piping on the Mechs right arm to follow the guns movement but still have extra control when needed. This gave me a thought, why not separate the arm into two separate IKs which drive each other?

After doing some research and looking into different rigging methods i found a solution, a bow string method mini rig on the arms piping. 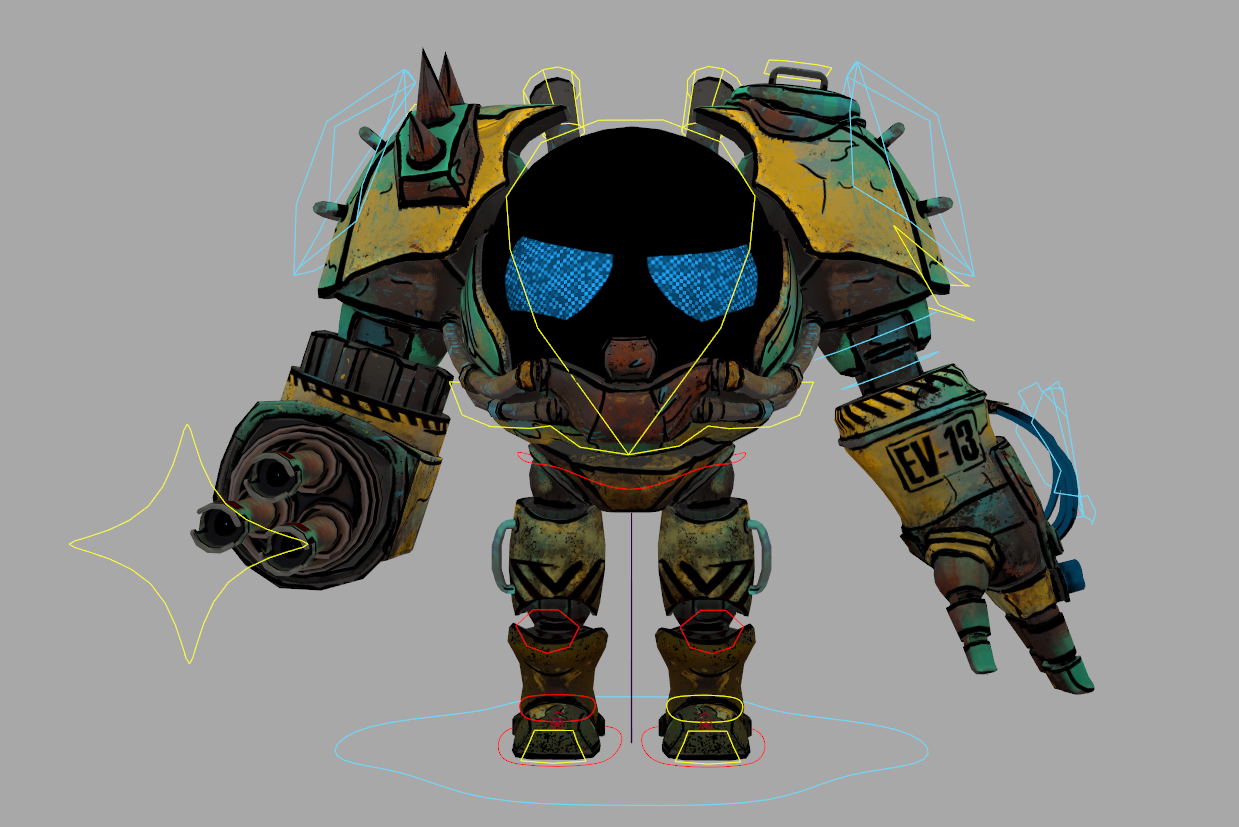 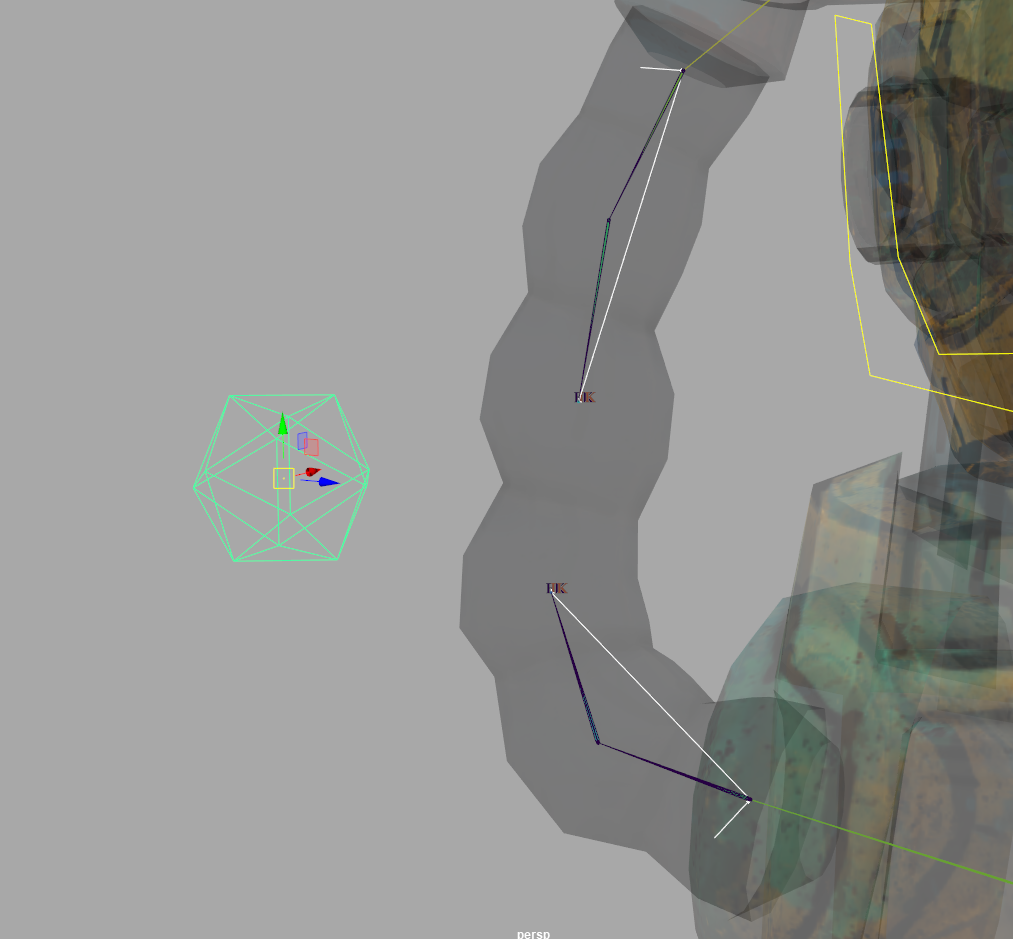 The bow string method is just as it says on the tin! two IKs constrained by one controller and voila, you have a simple bow style setup for the piping to be move around and can be hand keyed!

The Iks at the end of each of the pipe is then connected via another IK joint chain, the right arm. As the Gun controller is aimed and moved around the scene, the piping will follow in all directions.

This ended up being really effective as this taught me more about experimenting with different solutions to a odd problem. 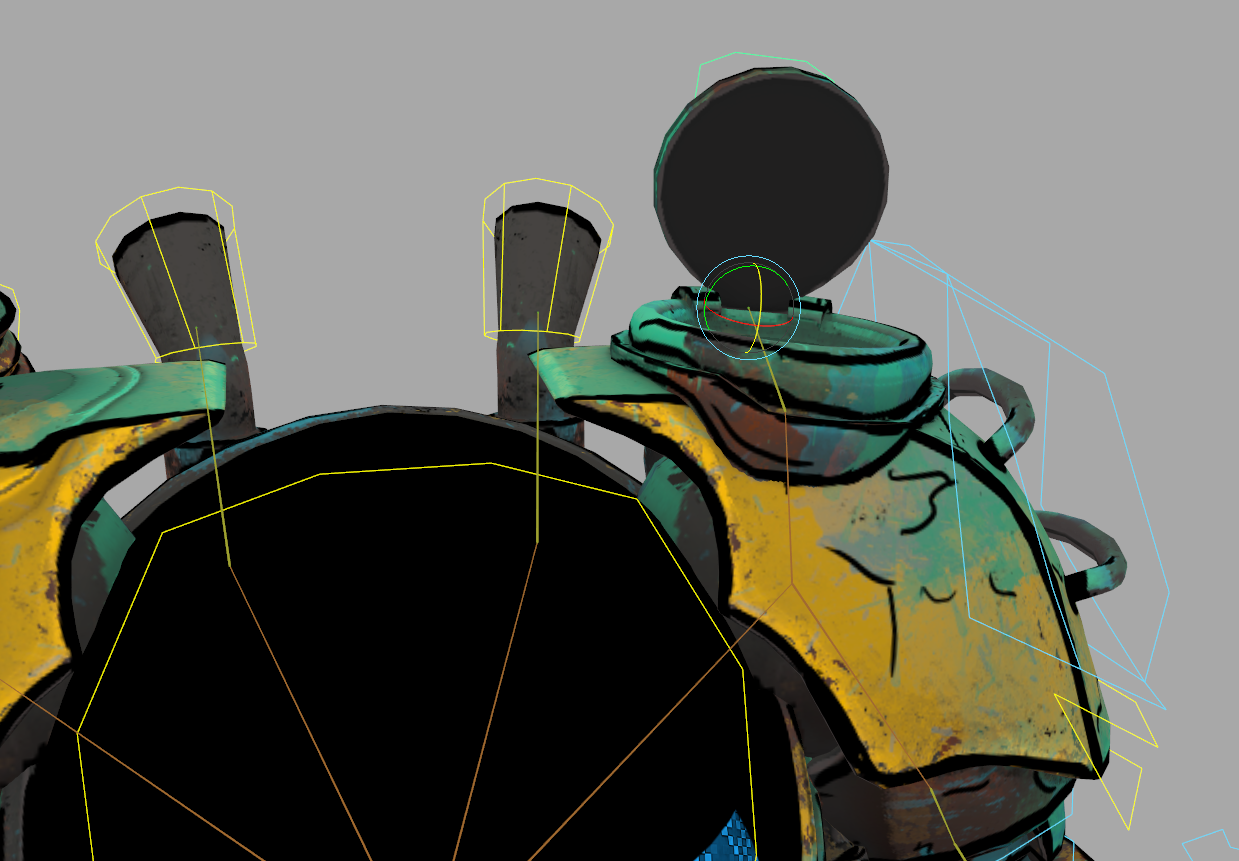 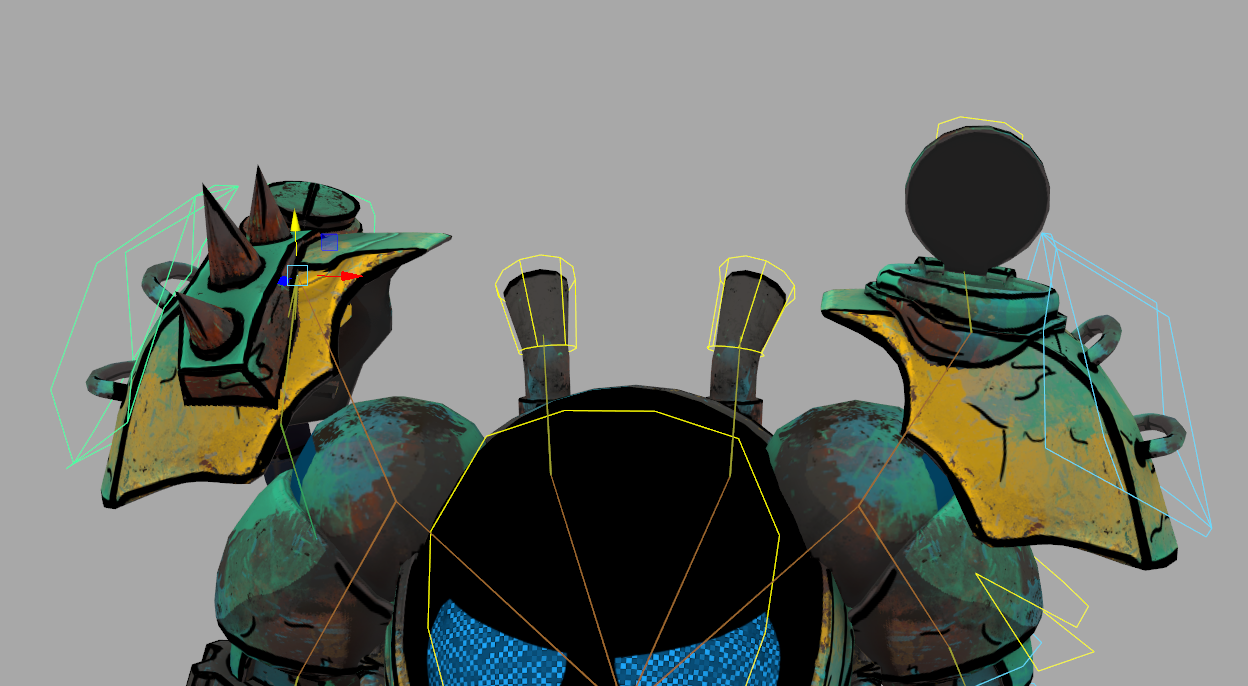 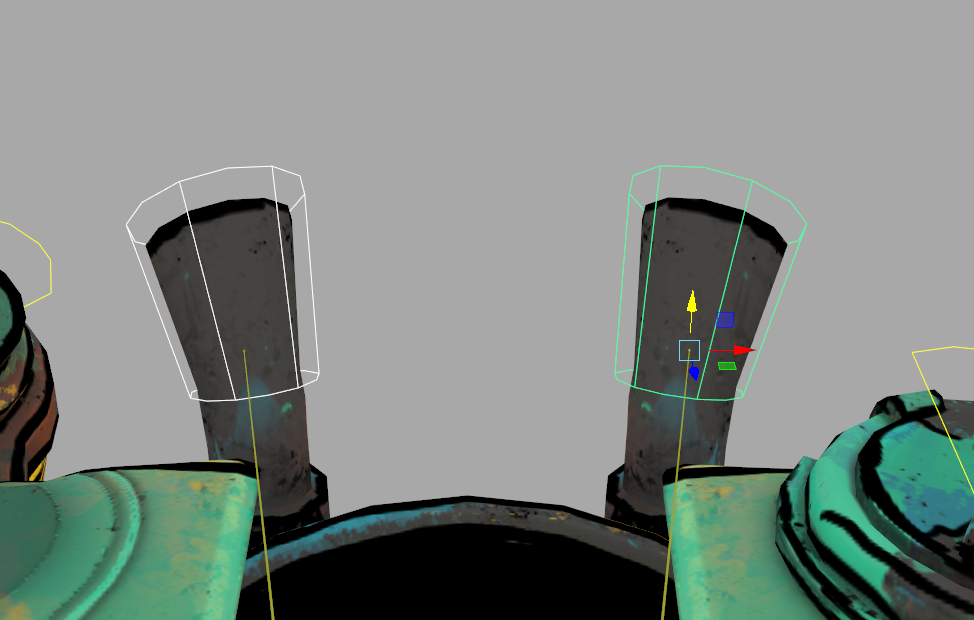 There were a few more additions to the E.V. such as a heat sink panel that needed to be controlled, two shoulder plates, an ammo port and the two exhaust pipe on there back.

These were quite simple to do and required some simple face selection to isolate there parts, then going in with some skin weight edits so it feels right when they are animated. Some of these part also had scale constraints attached meaning they can be made larger or smaller for extra animated quirks, squash and stretch etc. 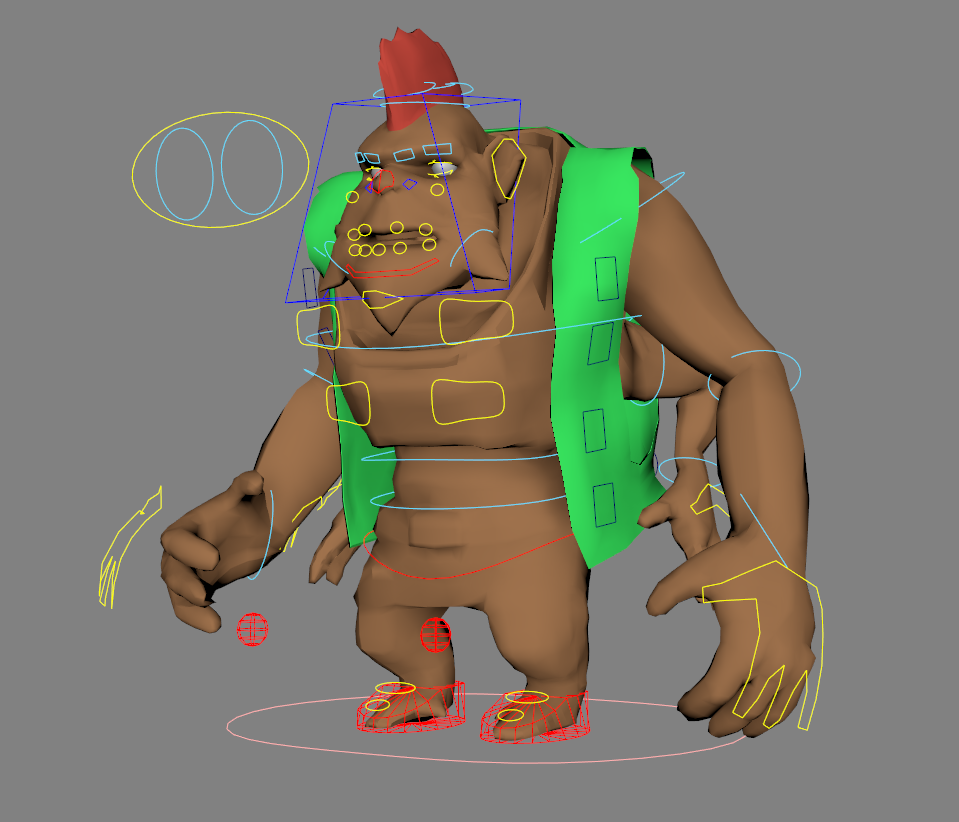 Wrench was a little tricky to do but came out quite well in the end when it came to the rigging side. Wrench has 4 arms that have FK to IK switching, a full face rig with hair, ear and nose controllers, as well as beard controls!

i'll tell ya, rigging four Fk to Ik arms with clavicle controls from scratch is time consuming but has its merits when its time to animate. I always ask my fellow animator if he wanted any extras before i progress further and this was an important one.

I think the easiest part of the rig to do was the face. As I've had facial rigging experience prior to the rigging of this character it didn't take long at all. There is a few examples just below which shows off some expressions made with the rig. 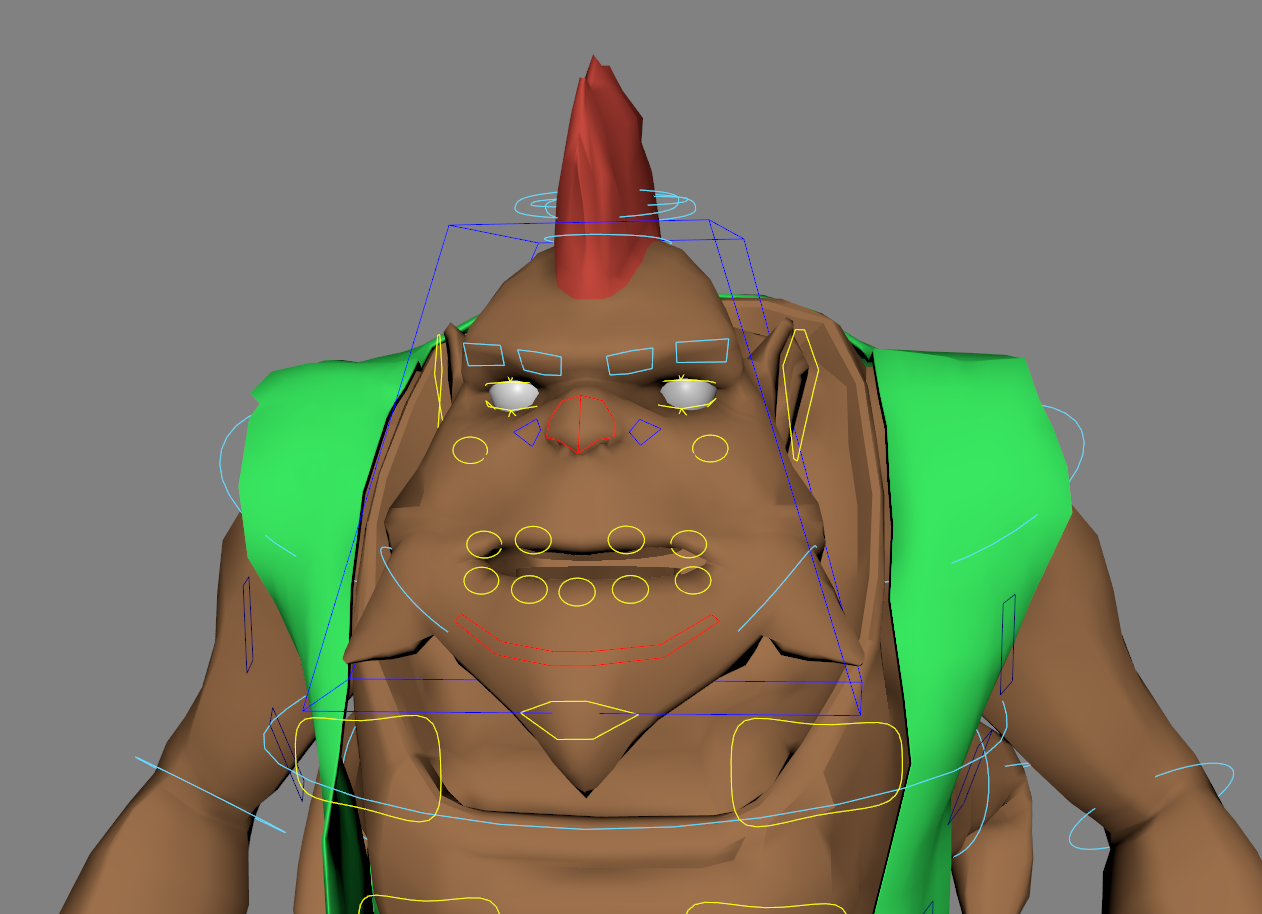 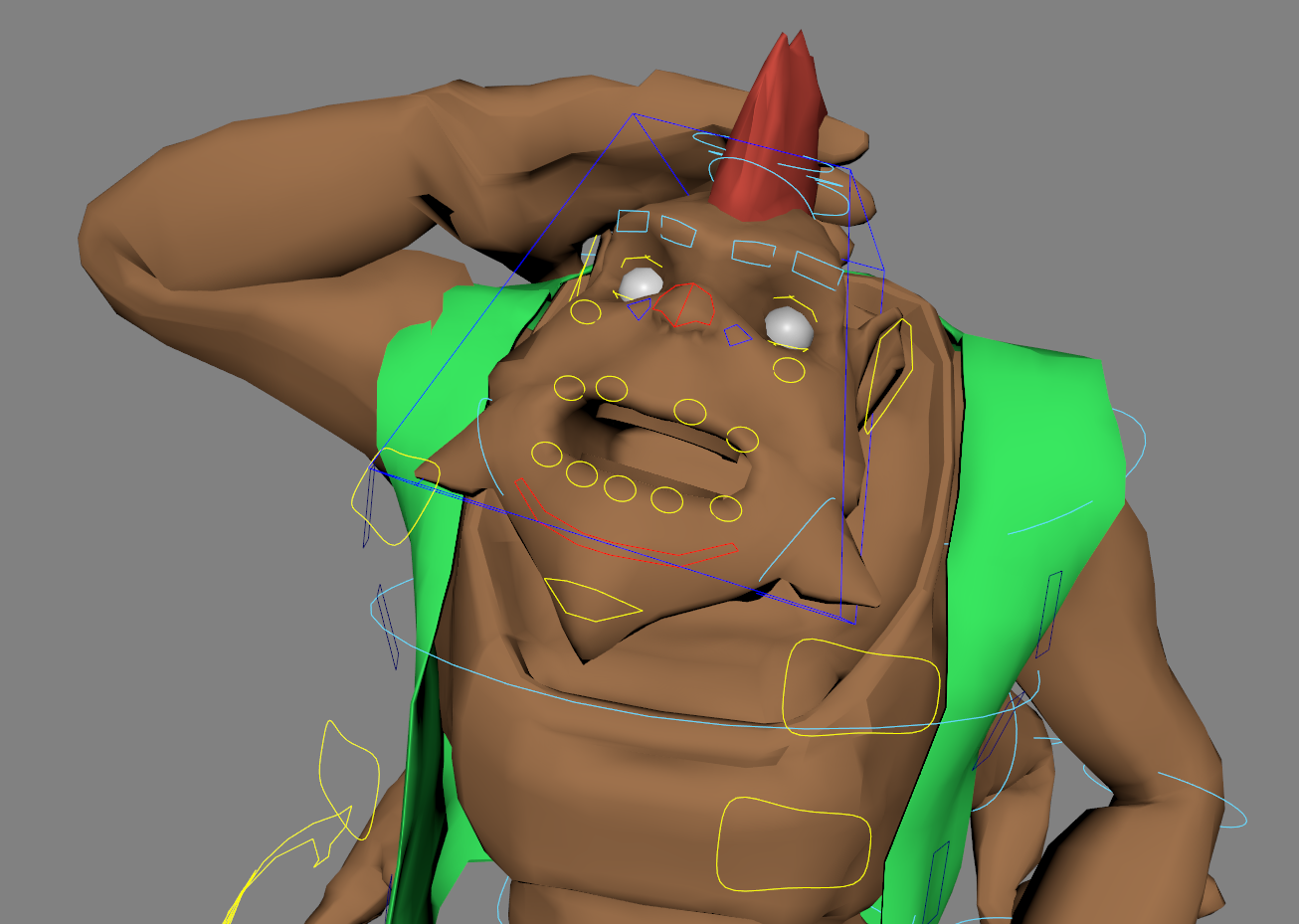 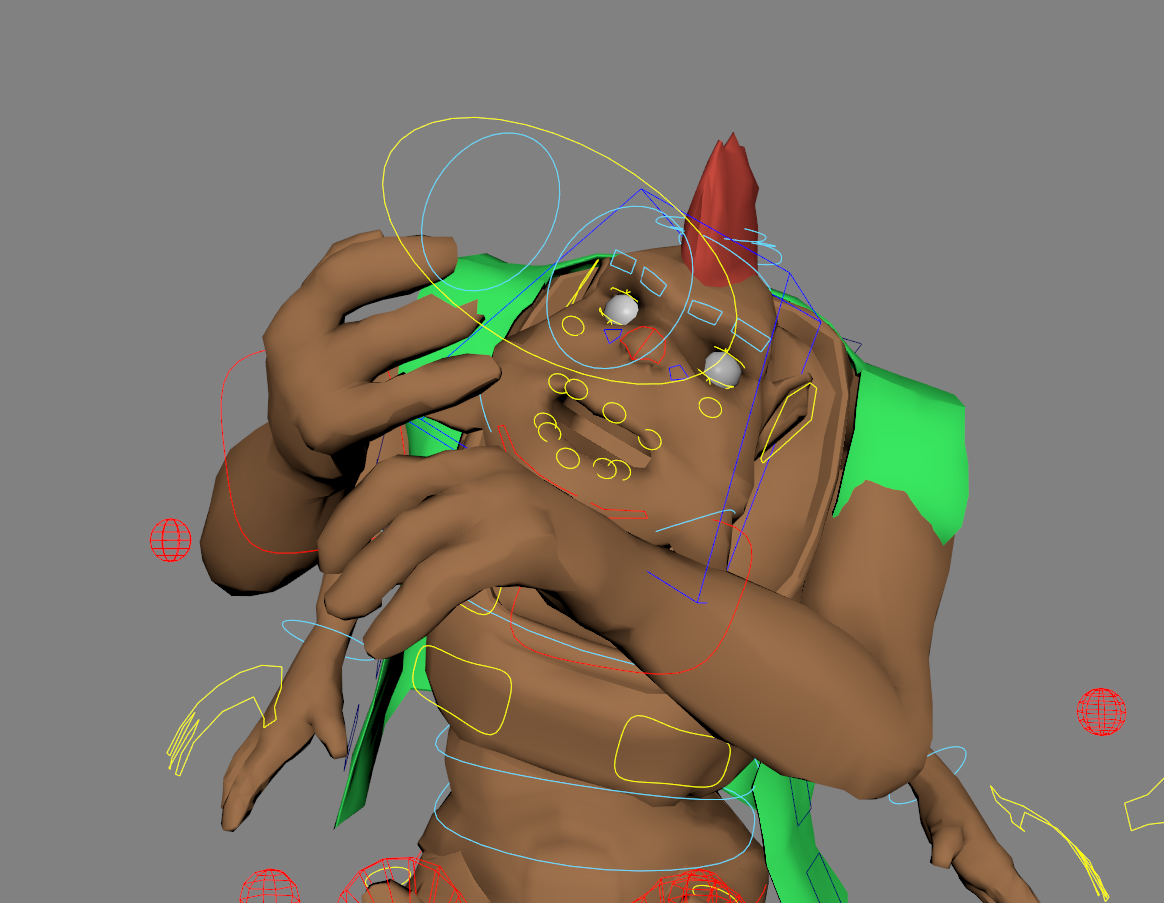 Another new challenge was rigging a joint based cloth setup for his jacket. This was different but not difficult to do now I've had a bit more practice with other rigs. Each section of the jacket has individual controllers that ever work independently or control a chain of other controllers to get more animation out of them. 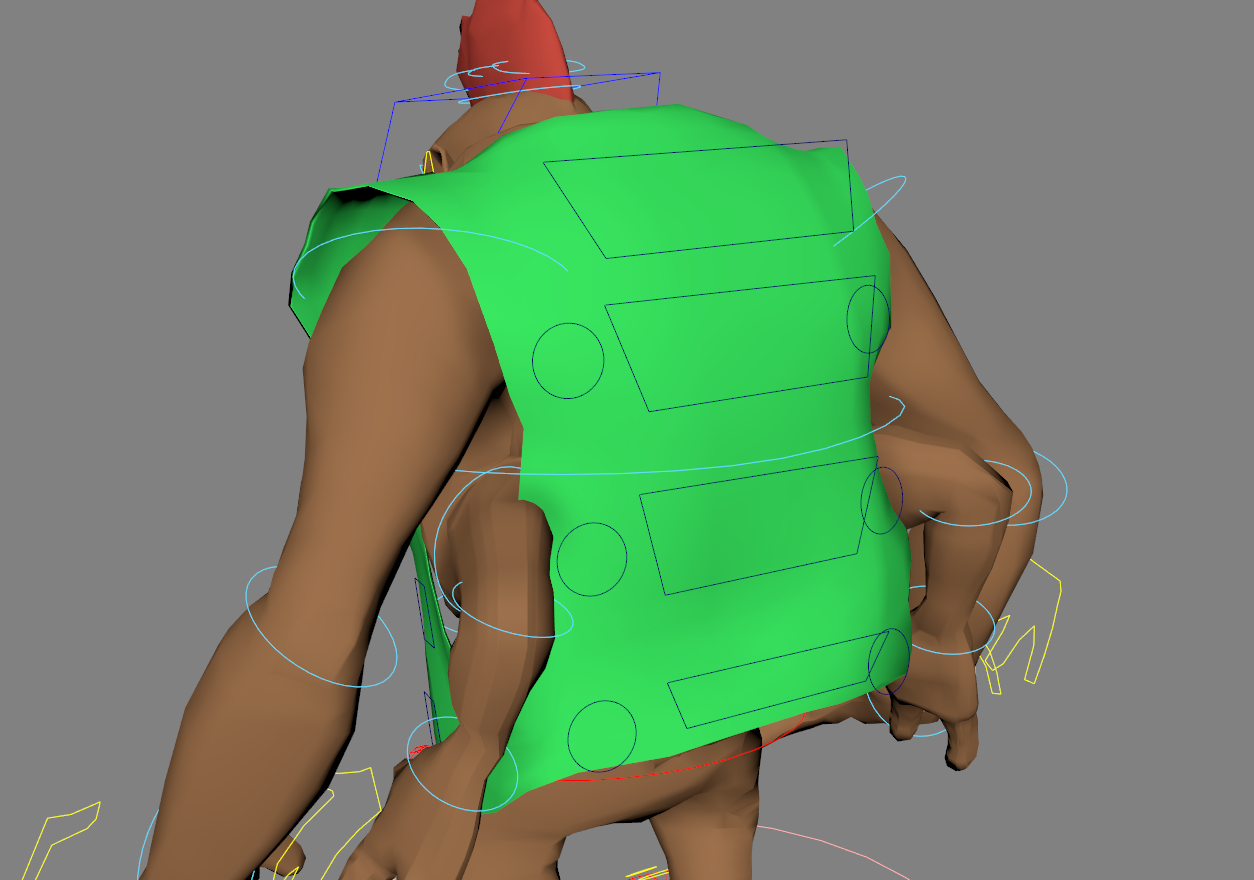 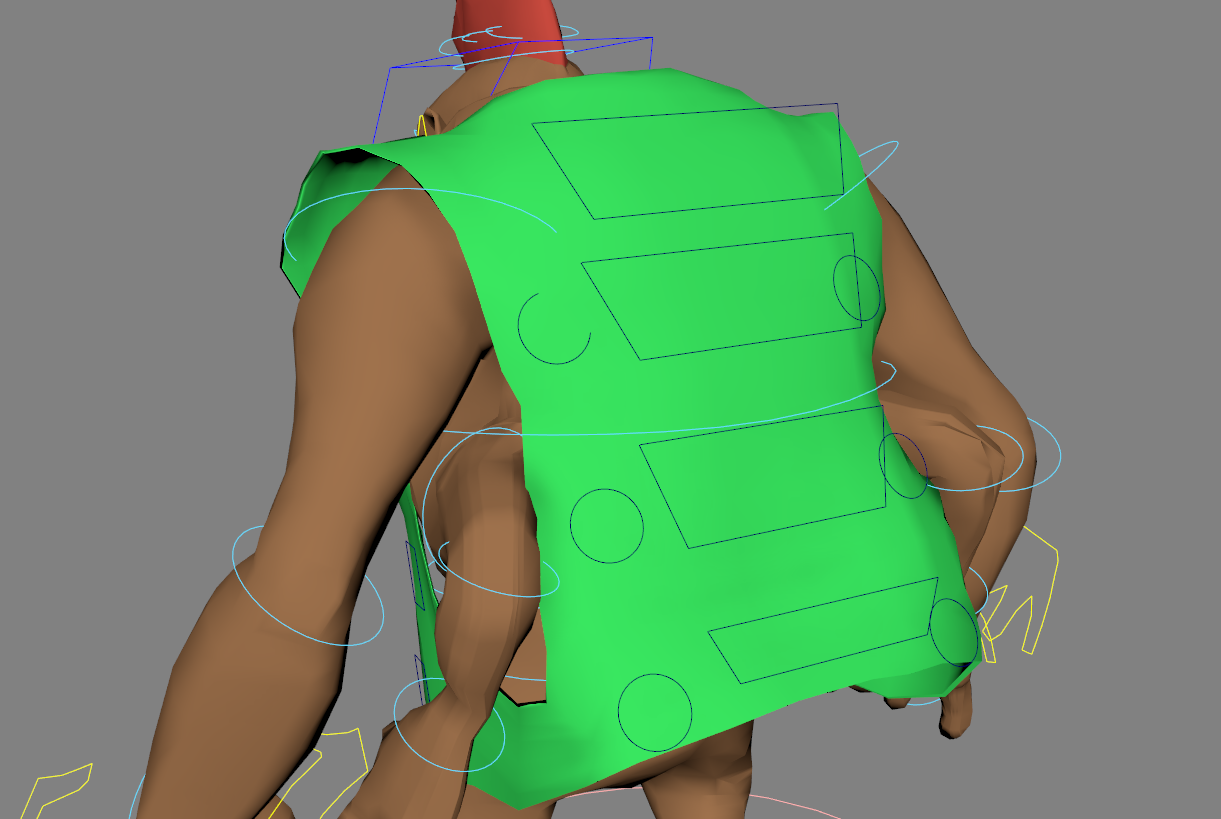 All these controllers add extra power when at the animation stage as you can see in this process view for the revive/death animation below. 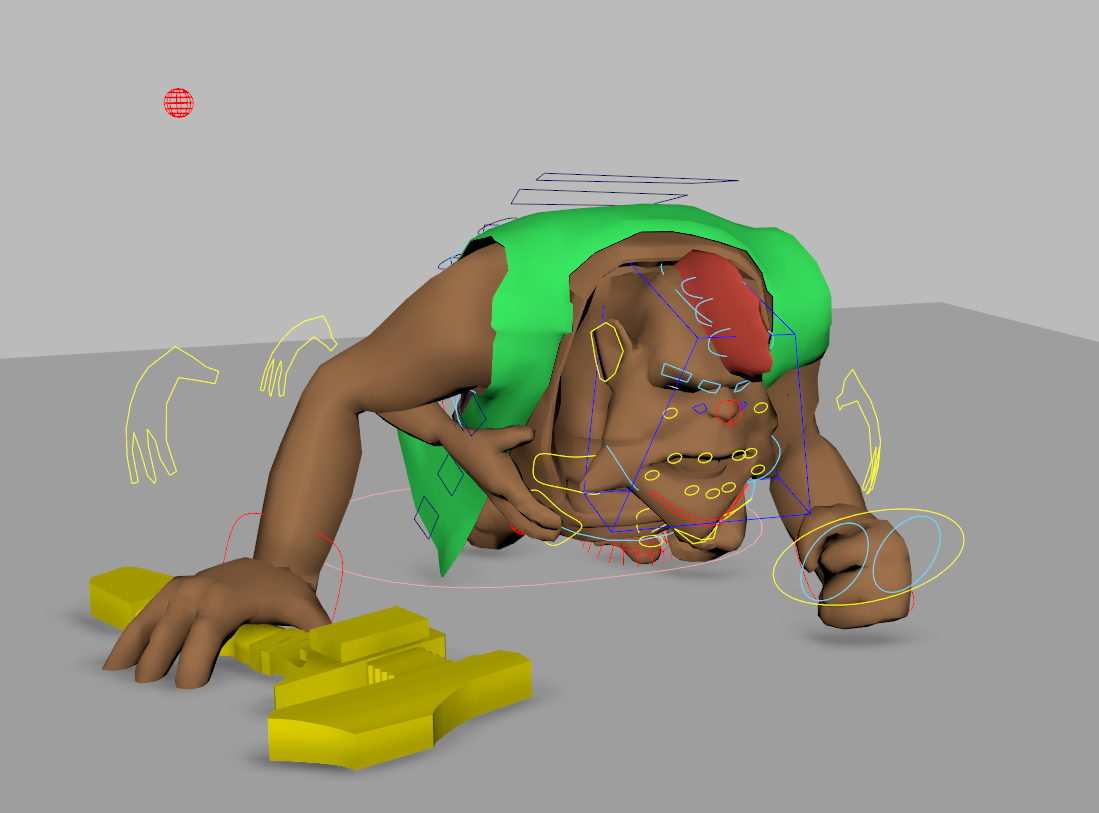 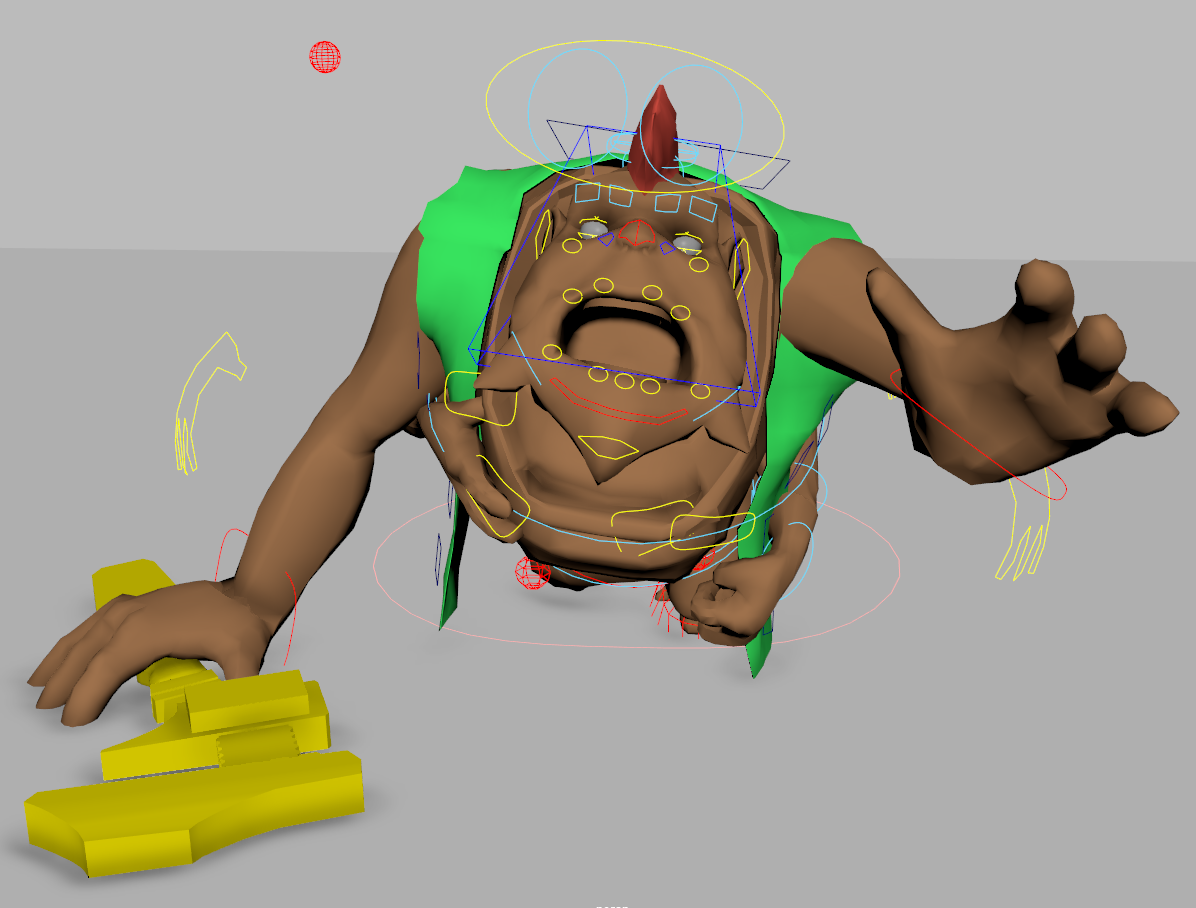 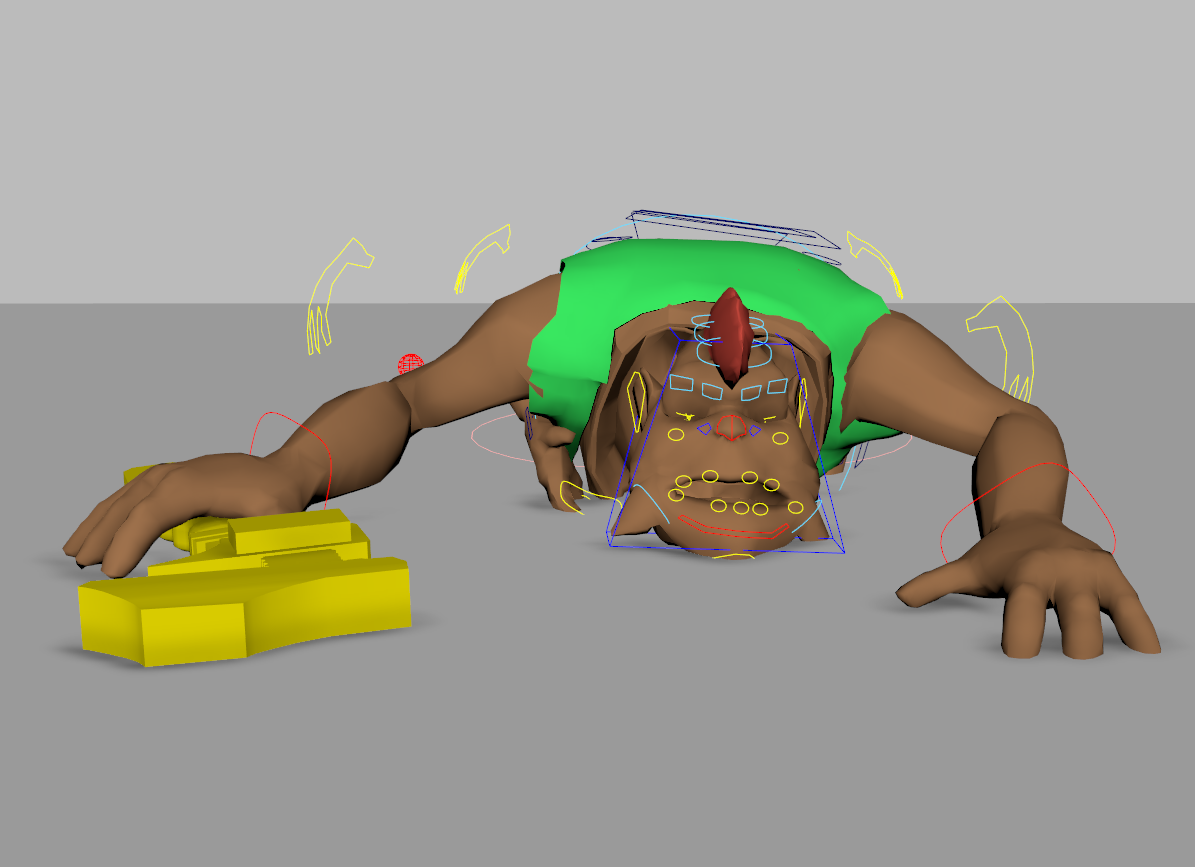 Here's a better look at the rigs and animations in action!