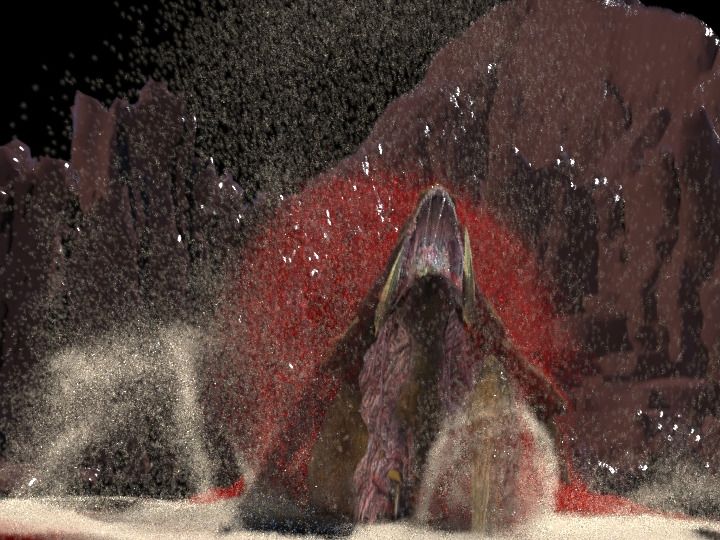 Wanted to check what the full sequence looked like. Let me know if you have questions about technique or goals!

This was an update that I was most fearful of getting right. It's perhaps the most interaction between the two characters in the whole project. Above is a first attempt at blocking out some of the important moves.

The hero uses technology to fight the monster. His color palette is blue-turquoise, and most of the things he uses are scripted and very geometrical. The shield is composed of a grid of cubes converted into lines. I created a custom HDA that moves lines along that grid and around the main tech at the center of the shield.

In contrast, the monster uses organic attacks and a red/orange color palette. It's very simulation-heavy and minimally scripted. The blood was especially hard to get right over such a large area. It's a pop network with a pop fluid node to create some semblence of  water.

The most difficult challenge of this part was to convey the story of the attack and defence in such a short period of time without having too much going on for the audience to track.

RnD of a distortion effect on the yell. Accomplished by rendering the temperature volume of a pyro sim and using Resolve Fusion's vector distortion and ripple effects.

Some test renders for tech our Hero will be using.

Some blood to complement the sand.