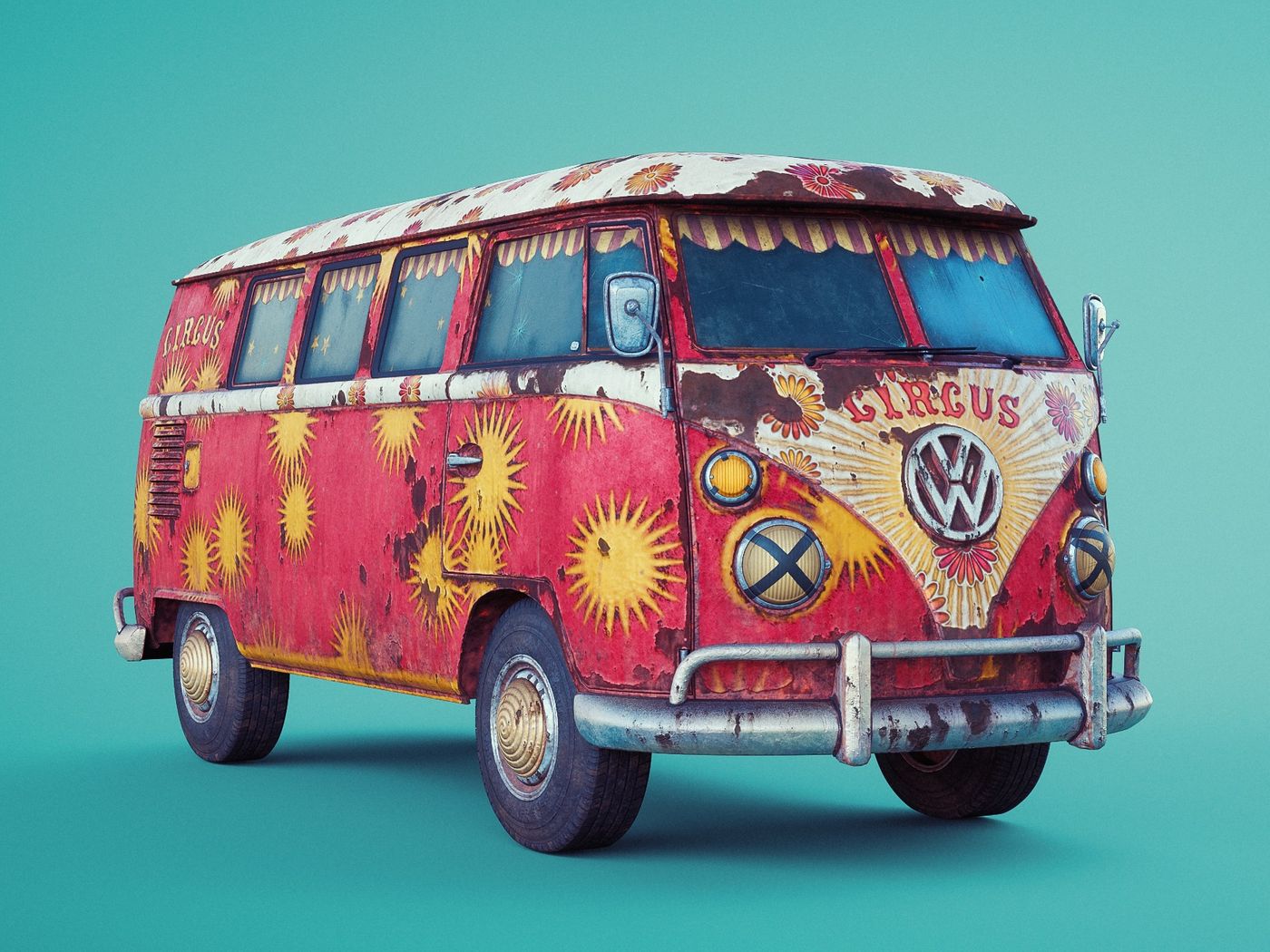 Being For The Benefit Of Mr.Kite!

by shatom on 16 Jan 2021 for Substance Texturing Challenge - Kombi

The Kombi Van formerly known as Henry the Horsepower.

Being For The Benefit Of Mr.Kite! 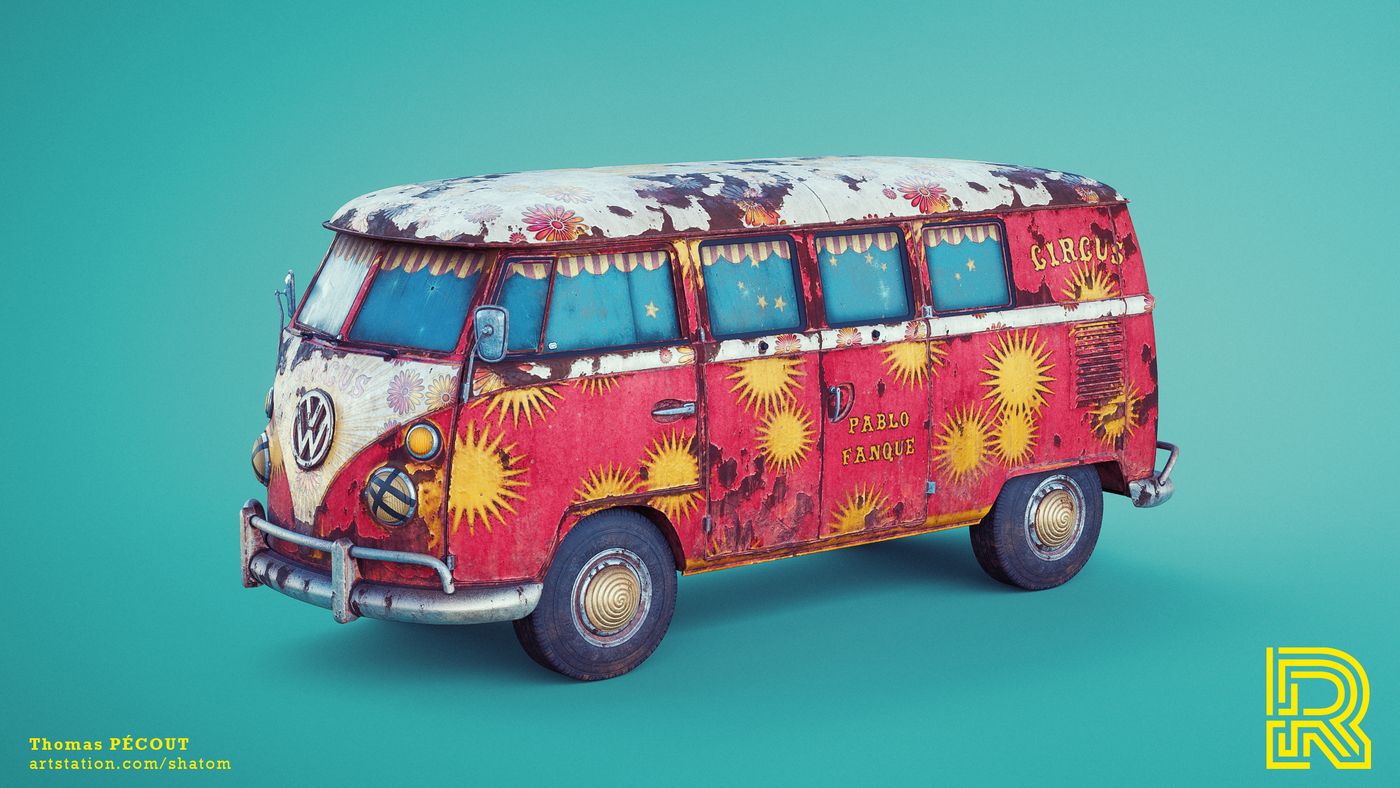 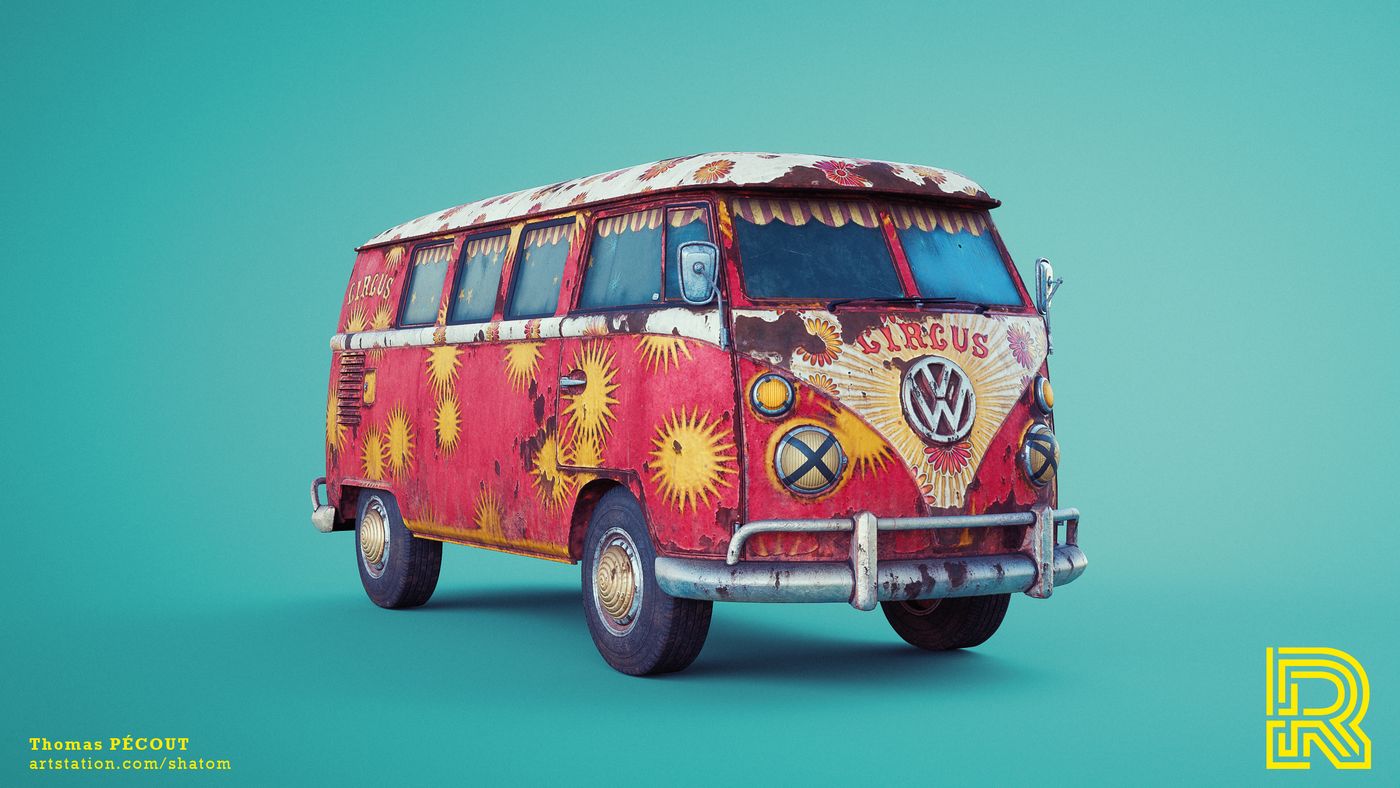 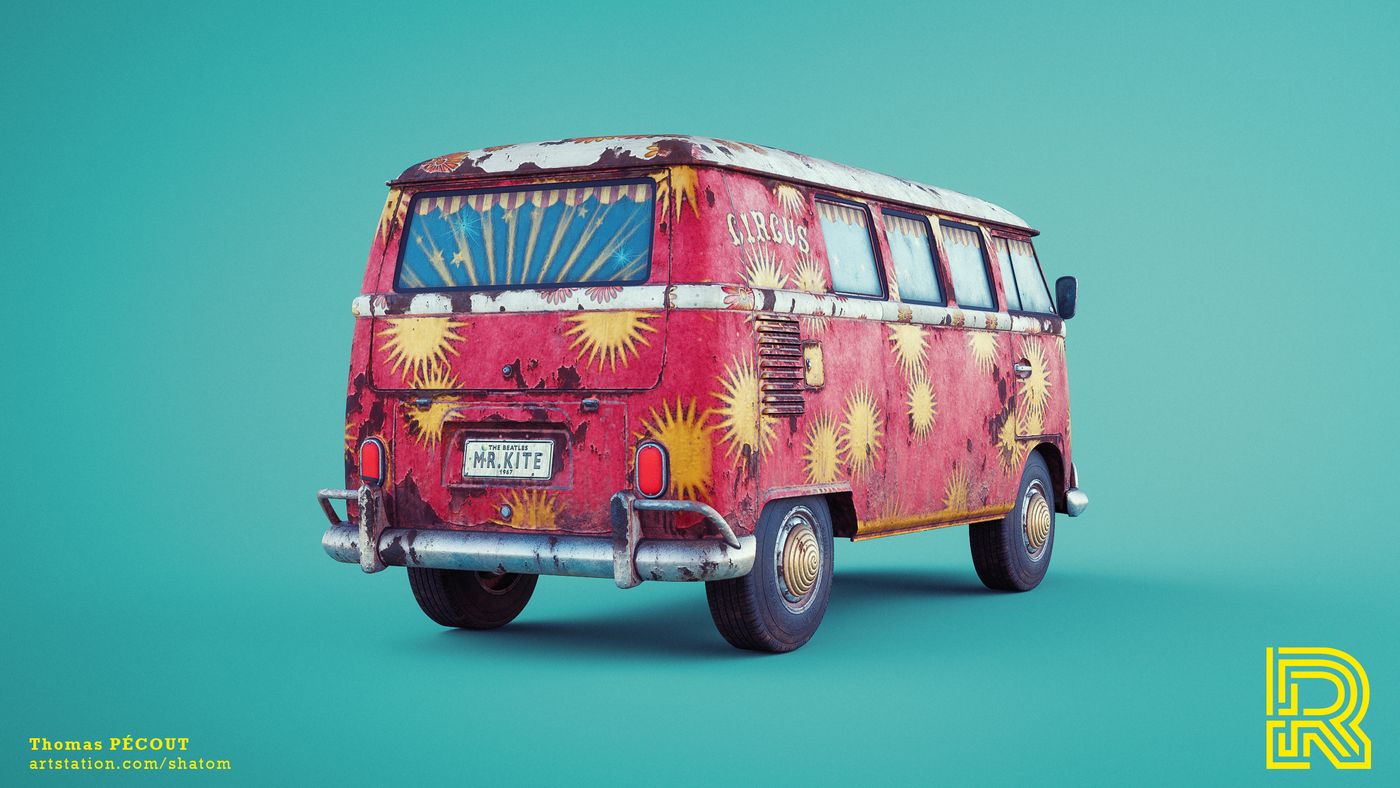 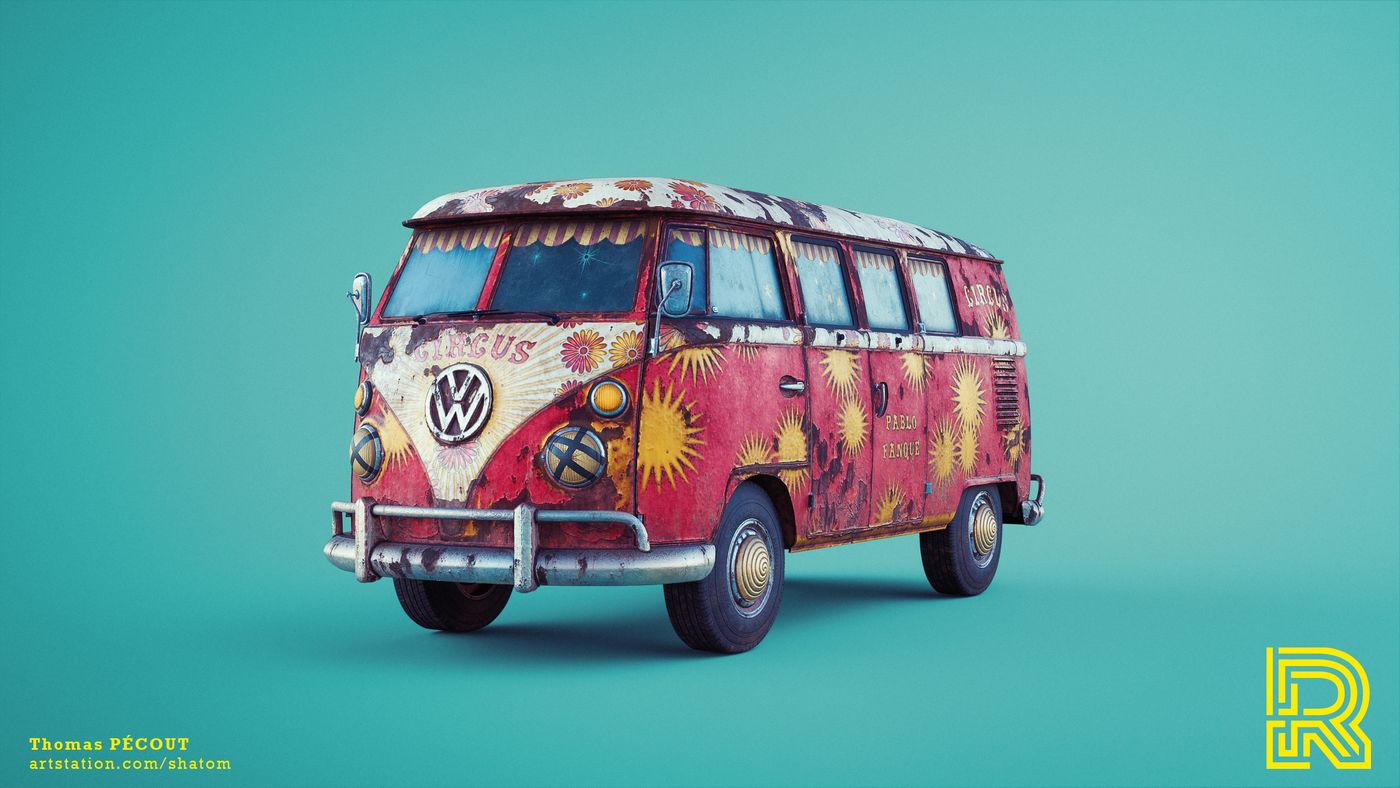 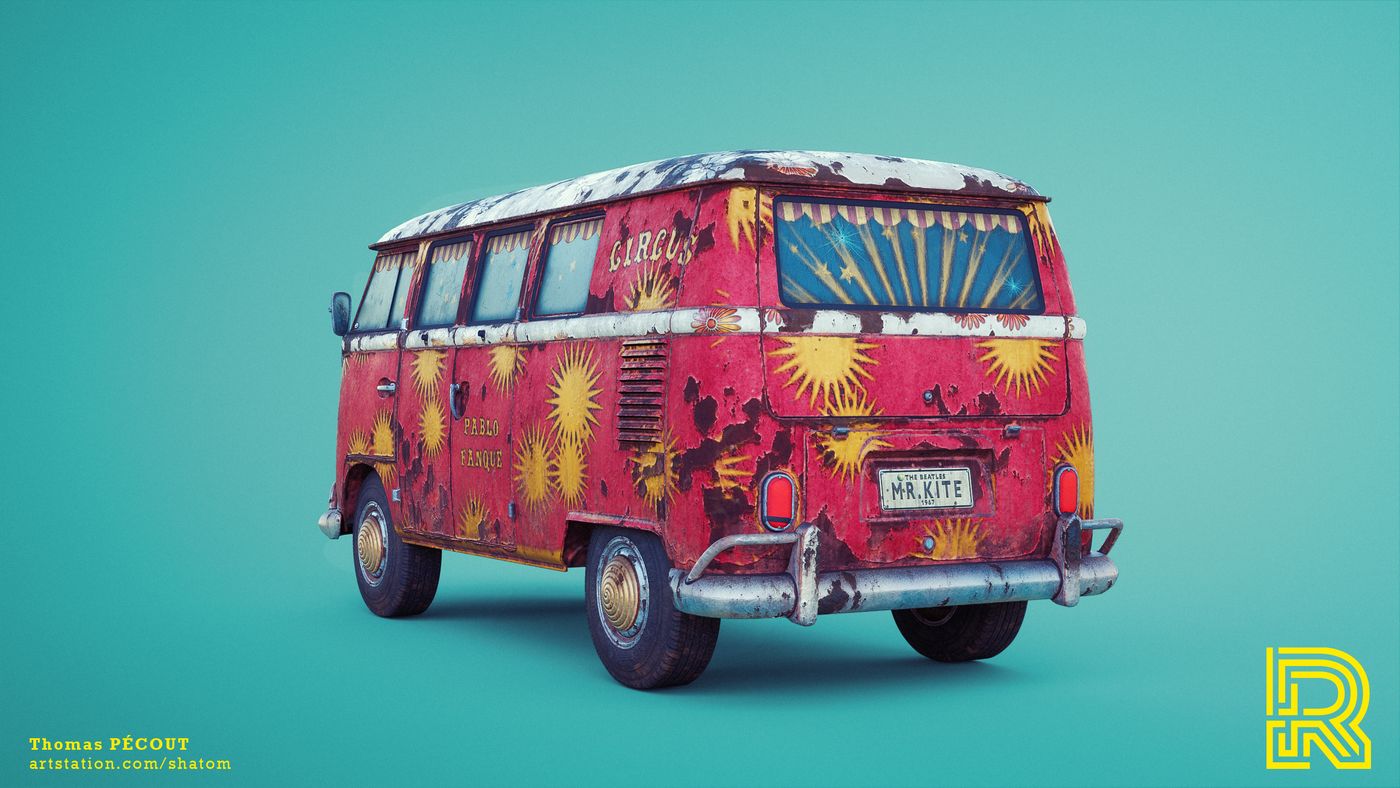 Here are my final images! I added few details, but the main textures didn't really change. I'm glad I've finished the contest (at some point I doubted my PC could handle the heavy file).

There are many great entries! It has been a really pleasant contest, thanks TheRookies for the opportunity and thank you Christina Ryan for this model. 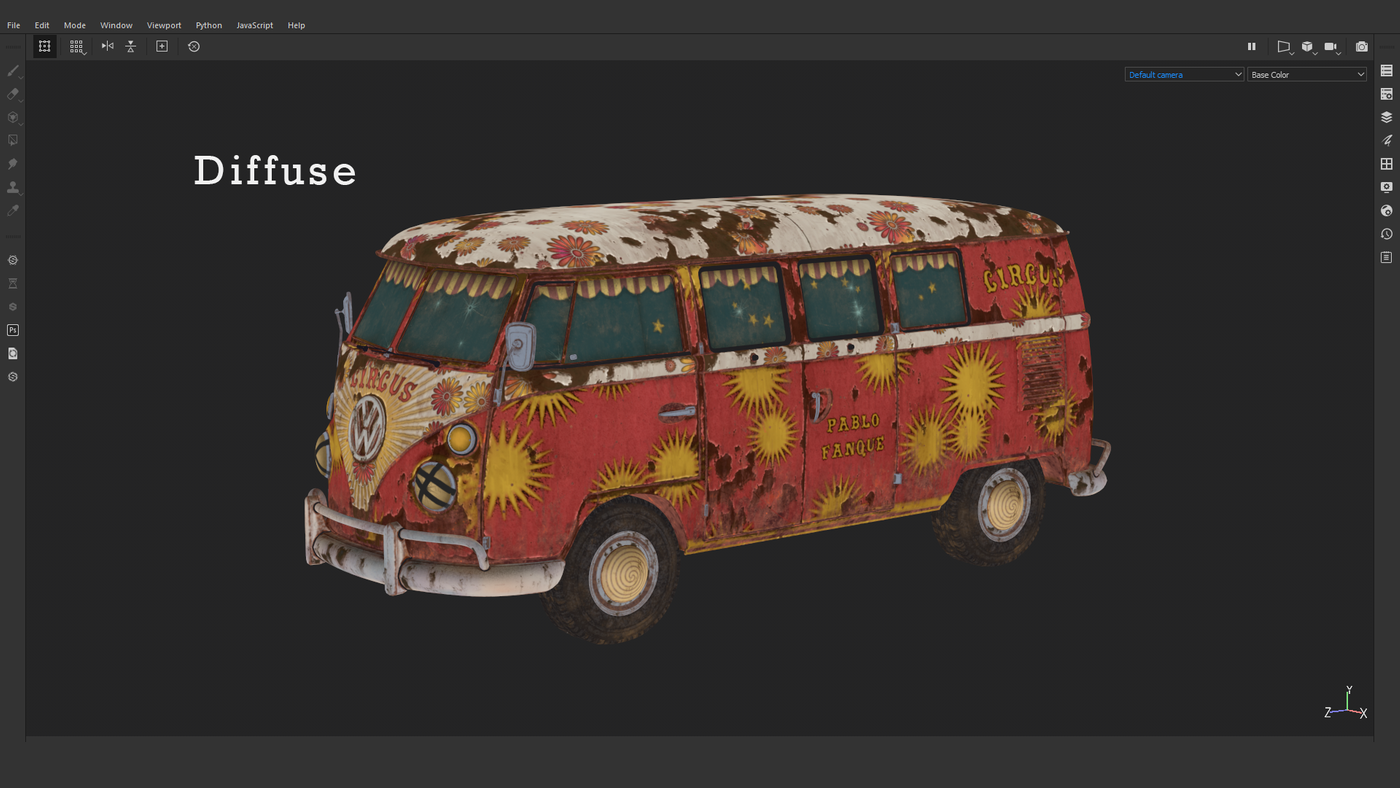 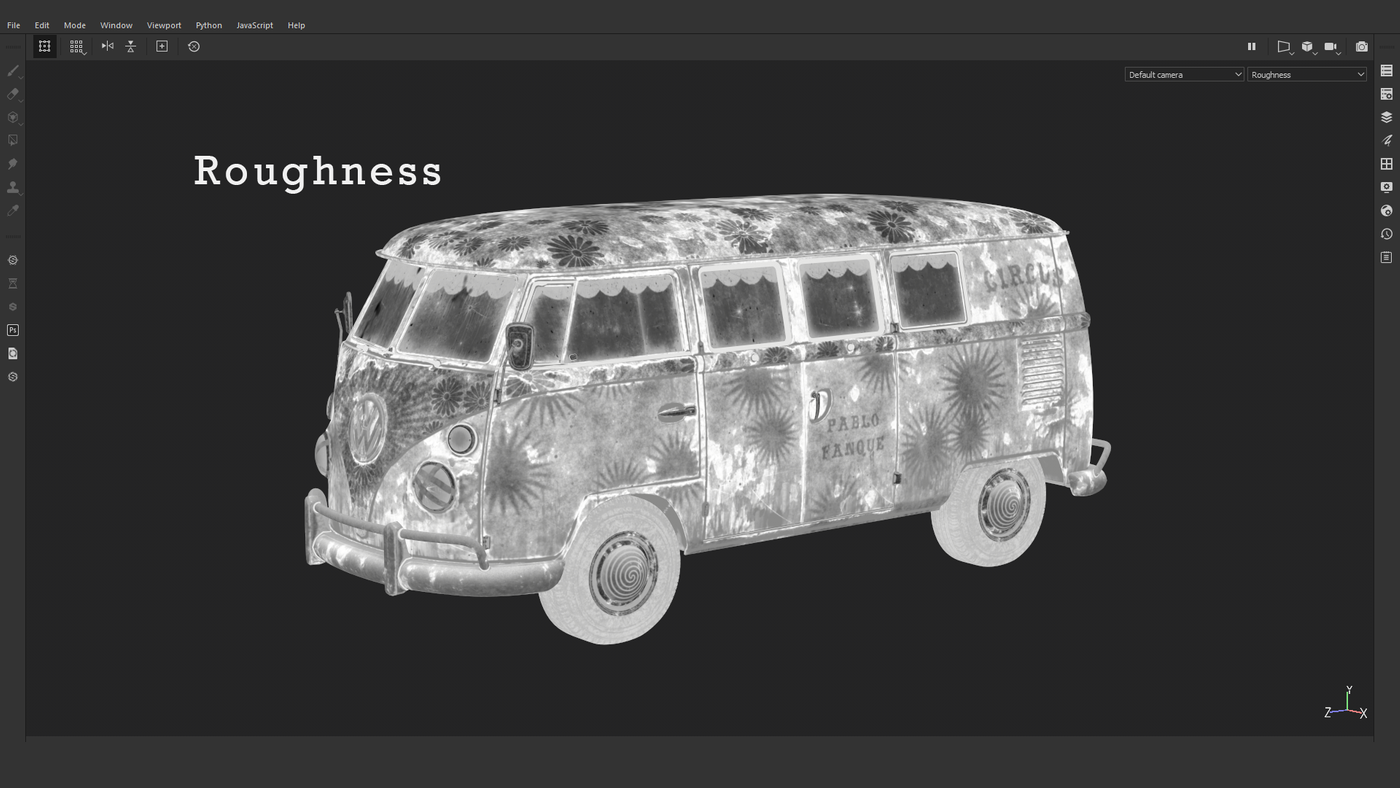 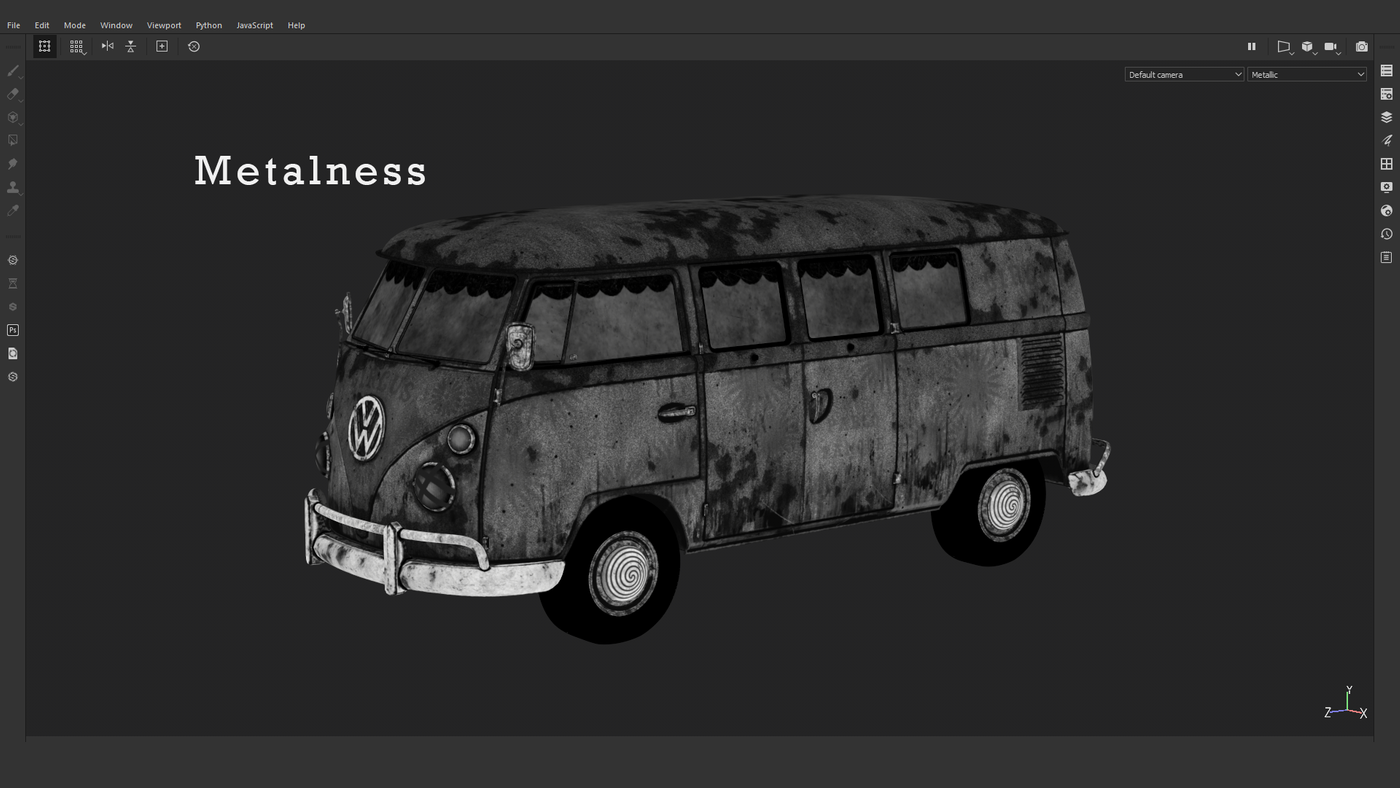 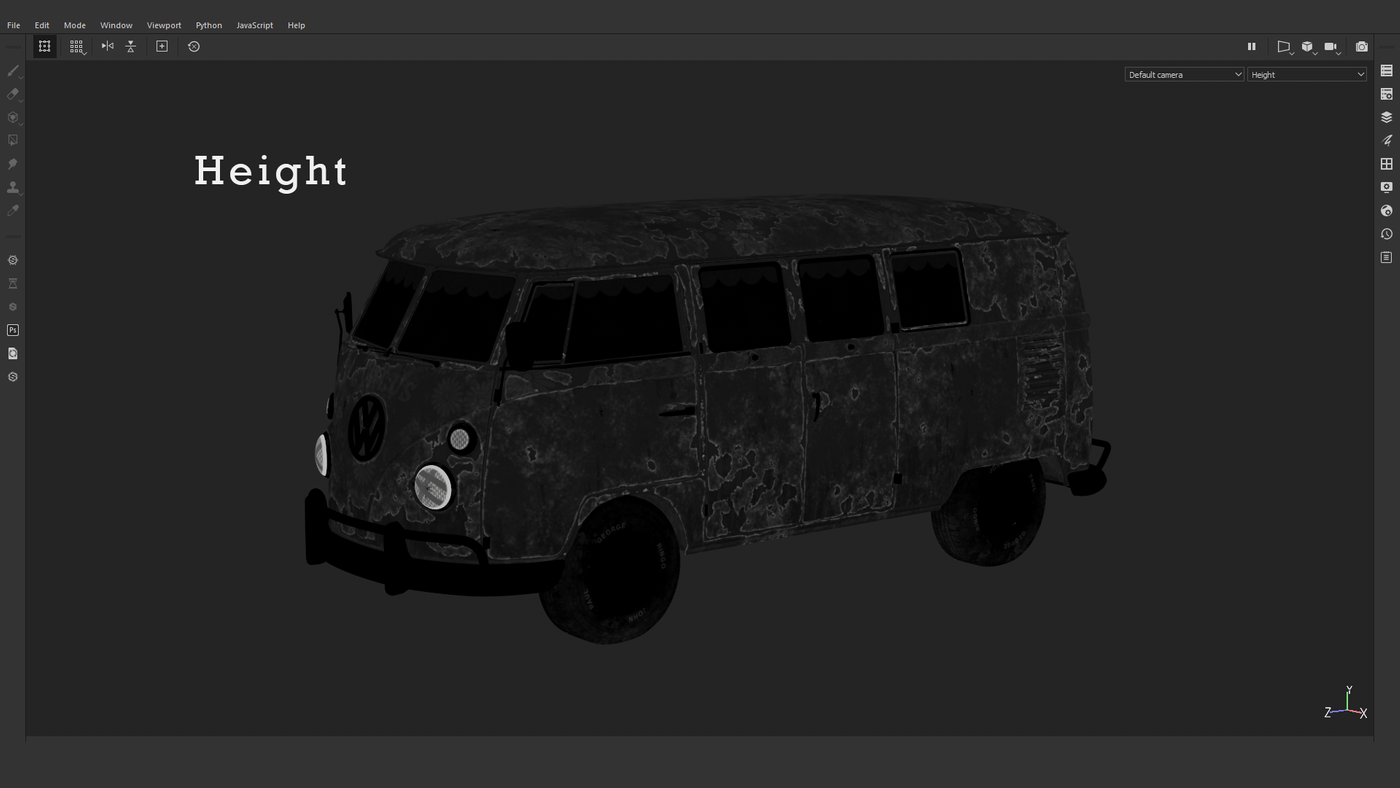 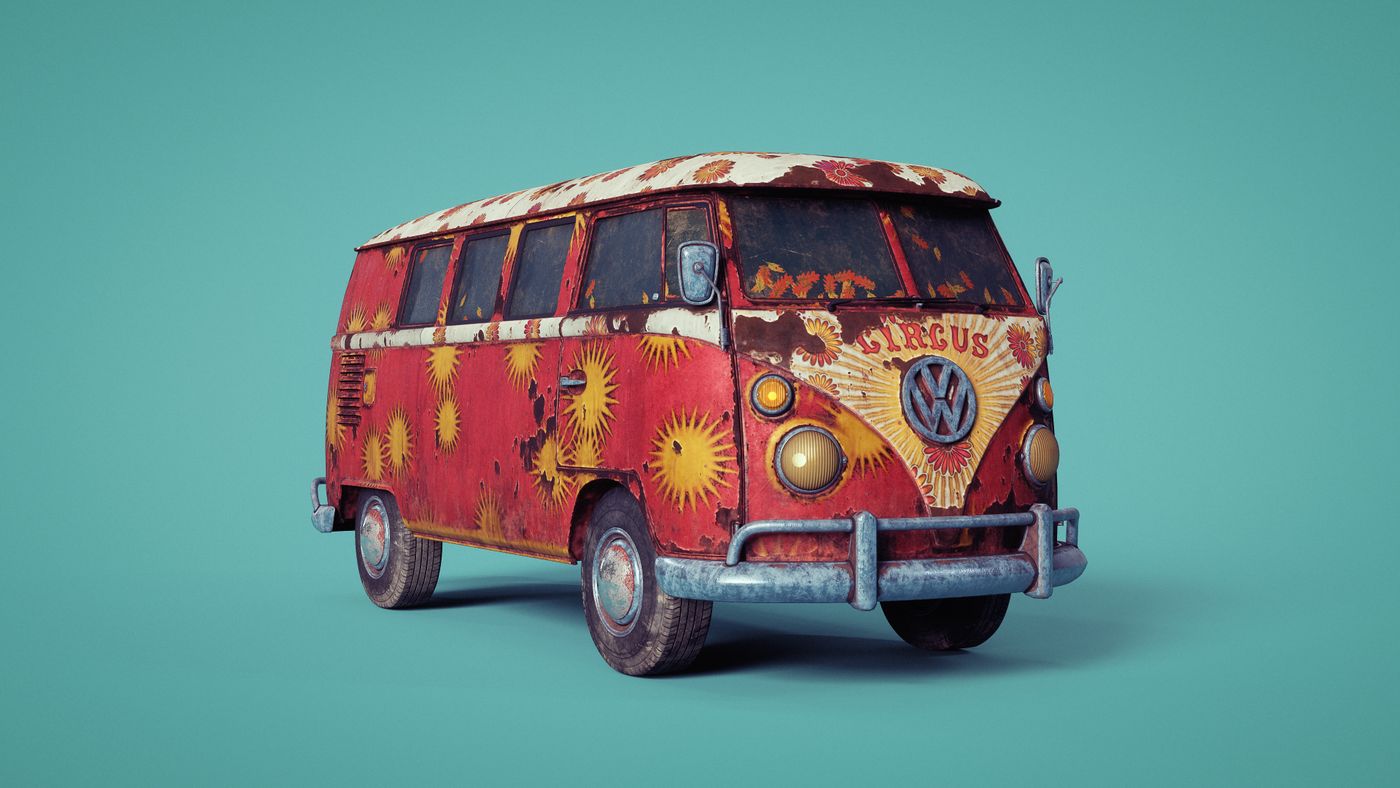 As you can see, I turned the blue body to red, in order to get closer to the "vintage circus" look I want. Now I'd like to spend more time on the other parts of the Van (bumpers, wheels, etc.) since I'm not quite satisfied with the result. Hopefully I'll come back to the body, with fresh new ideas. 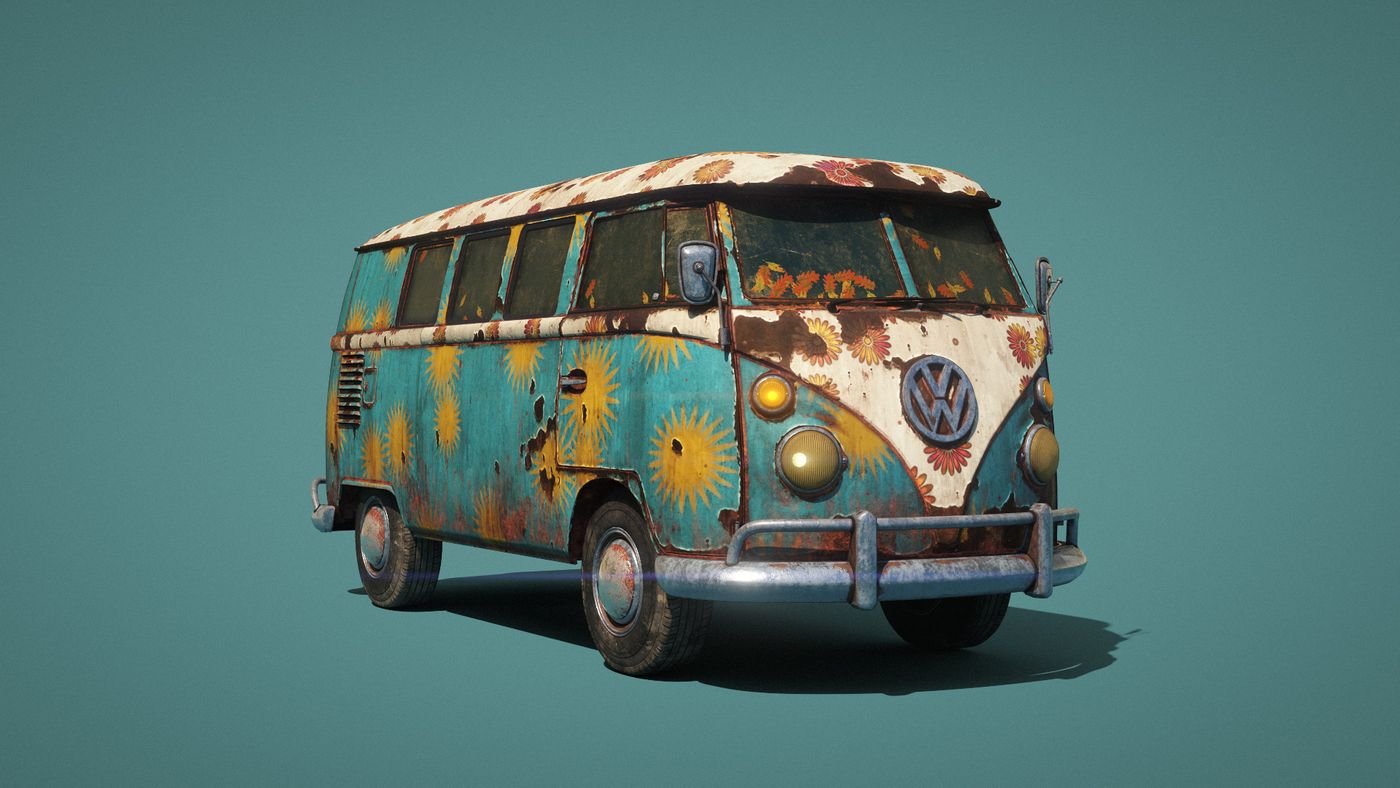 This time I tried many things with patterns, and the way to give it a random look, like stickers placed by hand.

It was a fun part!  Suns on the body get closer to the circus style I'd like to have. Now, even if I really like that blue color, I'm probably going to turn it red. We'll see. 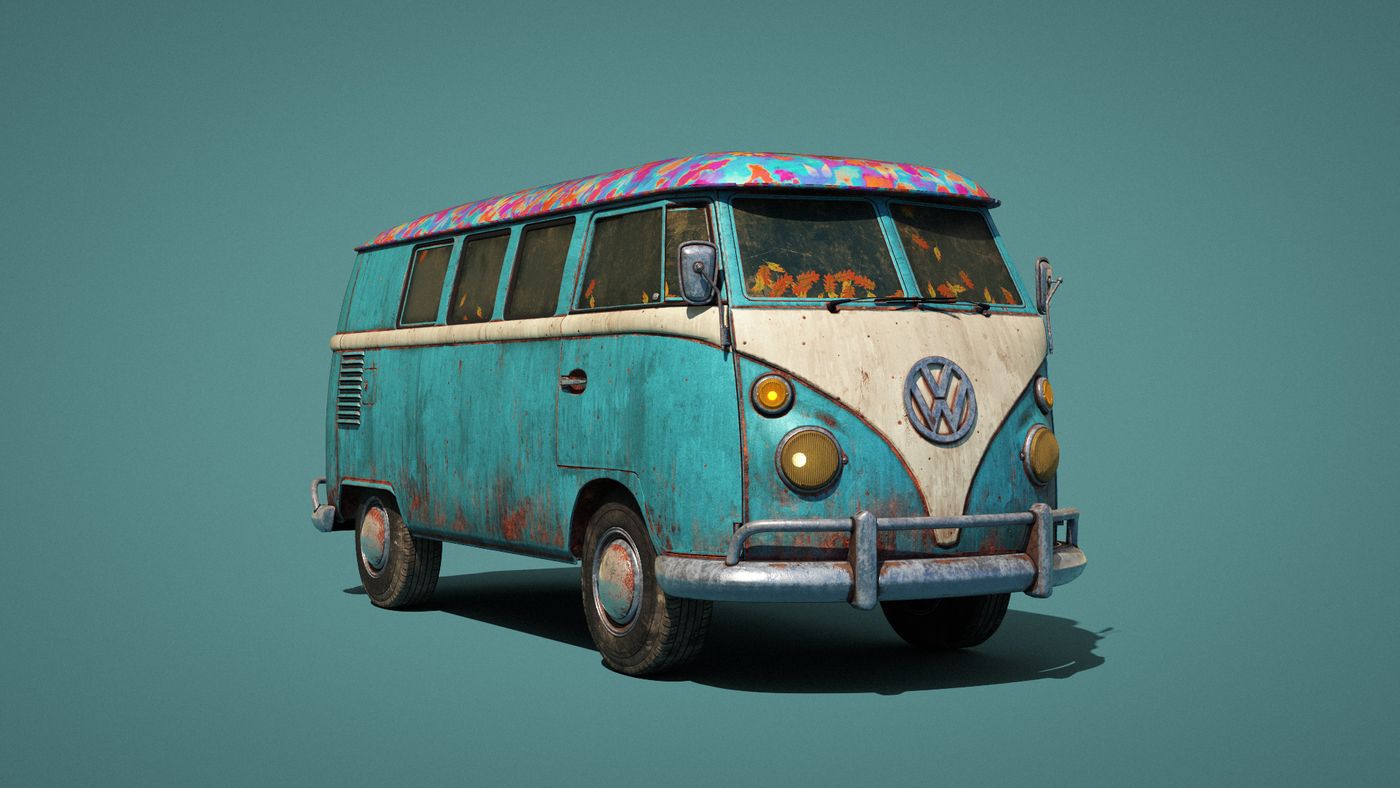 I reduced drastically my rust on the body (I'll add more afterwards), but it sill needs adjustments (curvature is too visible I'd say).

I also tried different psychedelic patterns for the roof, to see what I could do inside substance painter, playing with the procedural/grundge maps. 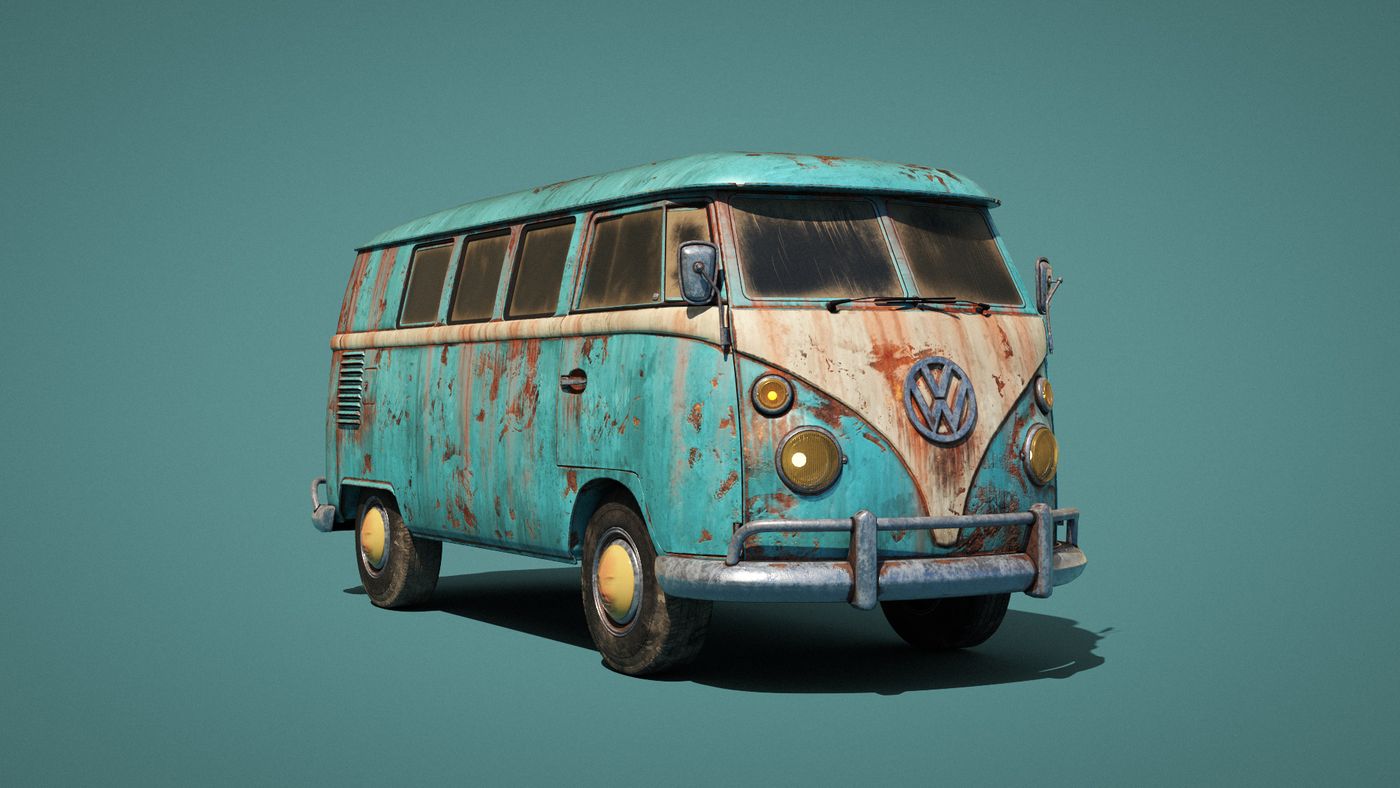 Few tests with different rust effects on the body, but at the end I found it was too much, or at least too rough. 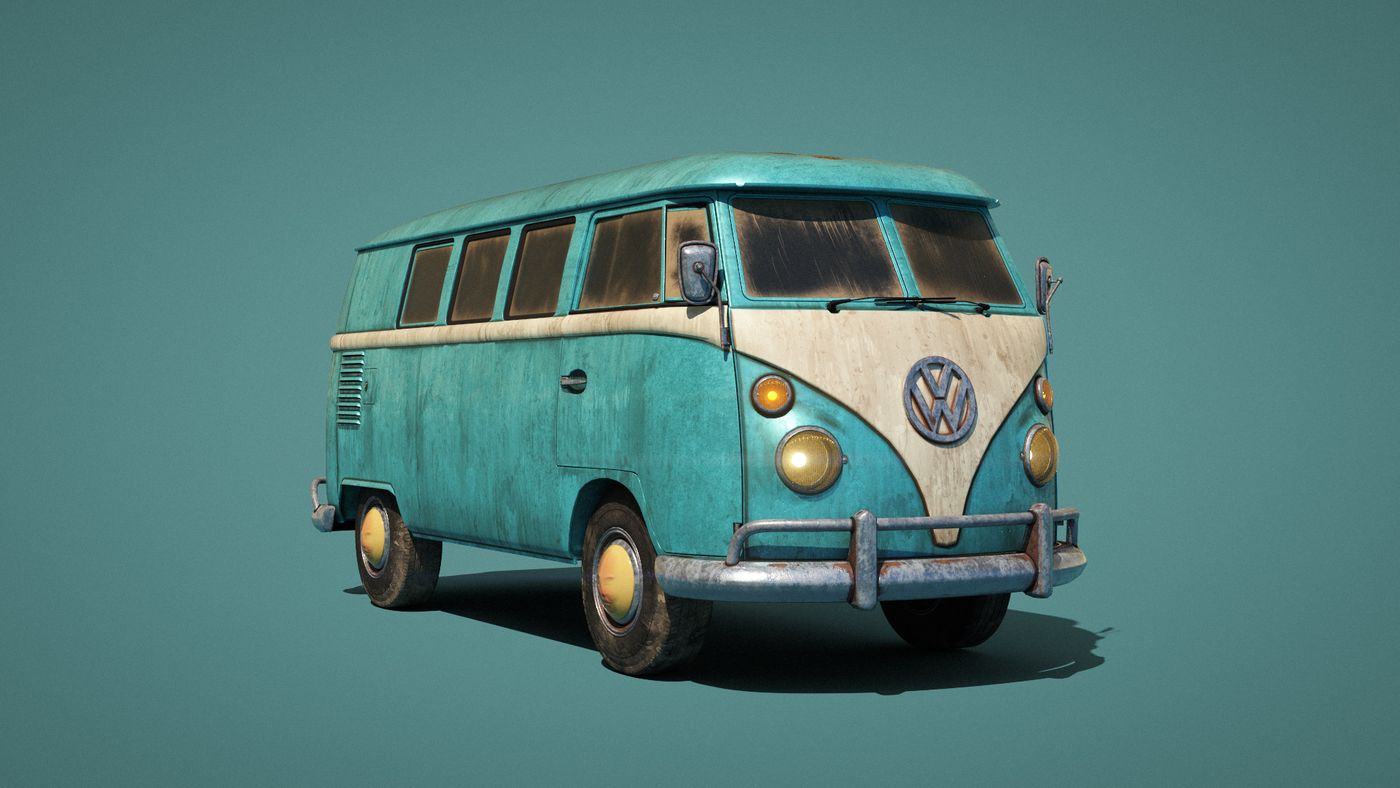 Then using the baked maps, and all the procedural stuff inside Substance Painter, I spent some time playing with the Roughness and Metalness of my Van. Tried to get something worn-out, adding rust and dirt.

I also experimented few things, such as the dust on the windows, where I used differents methods in the mask (procedural, baked maps, handpaint, particles brush etc.). Nonetheless, windows needed more work. 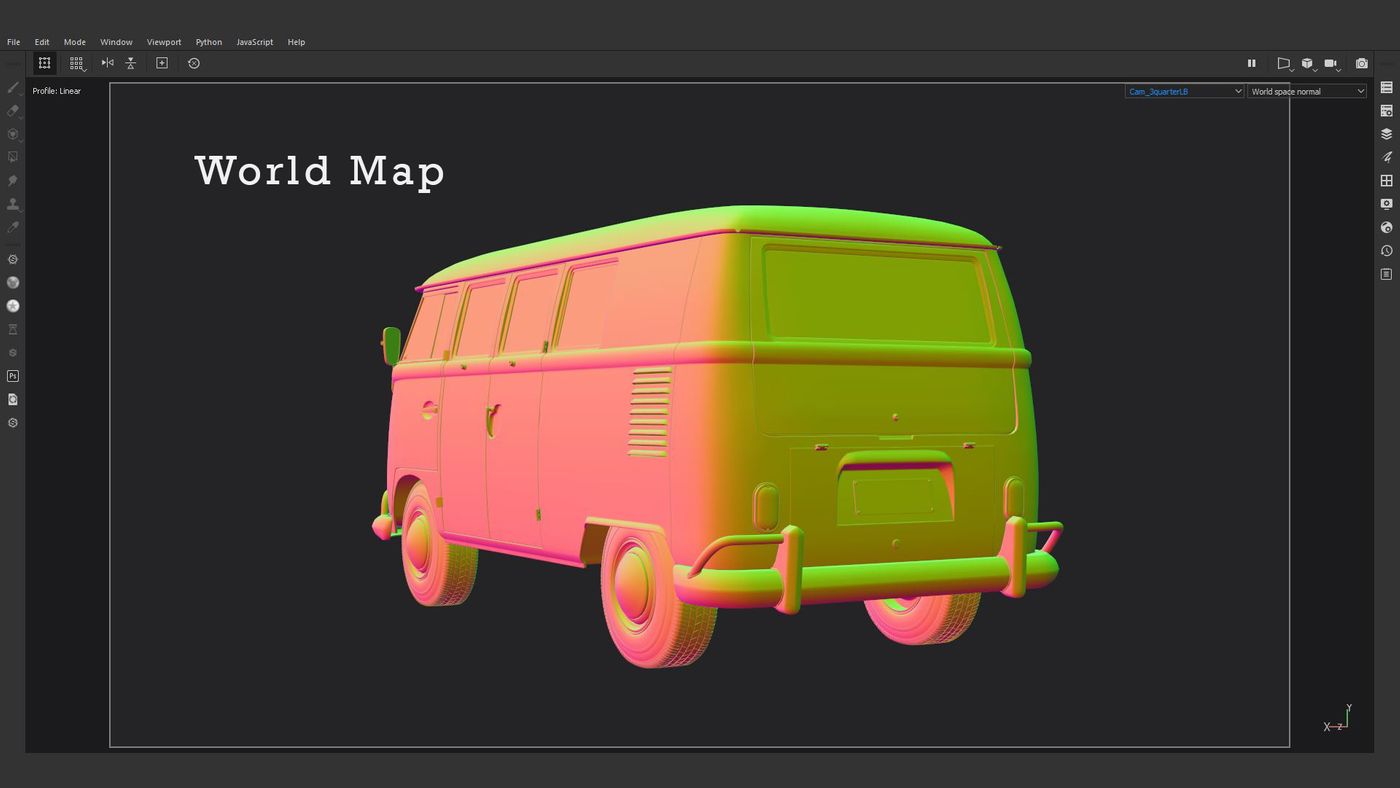 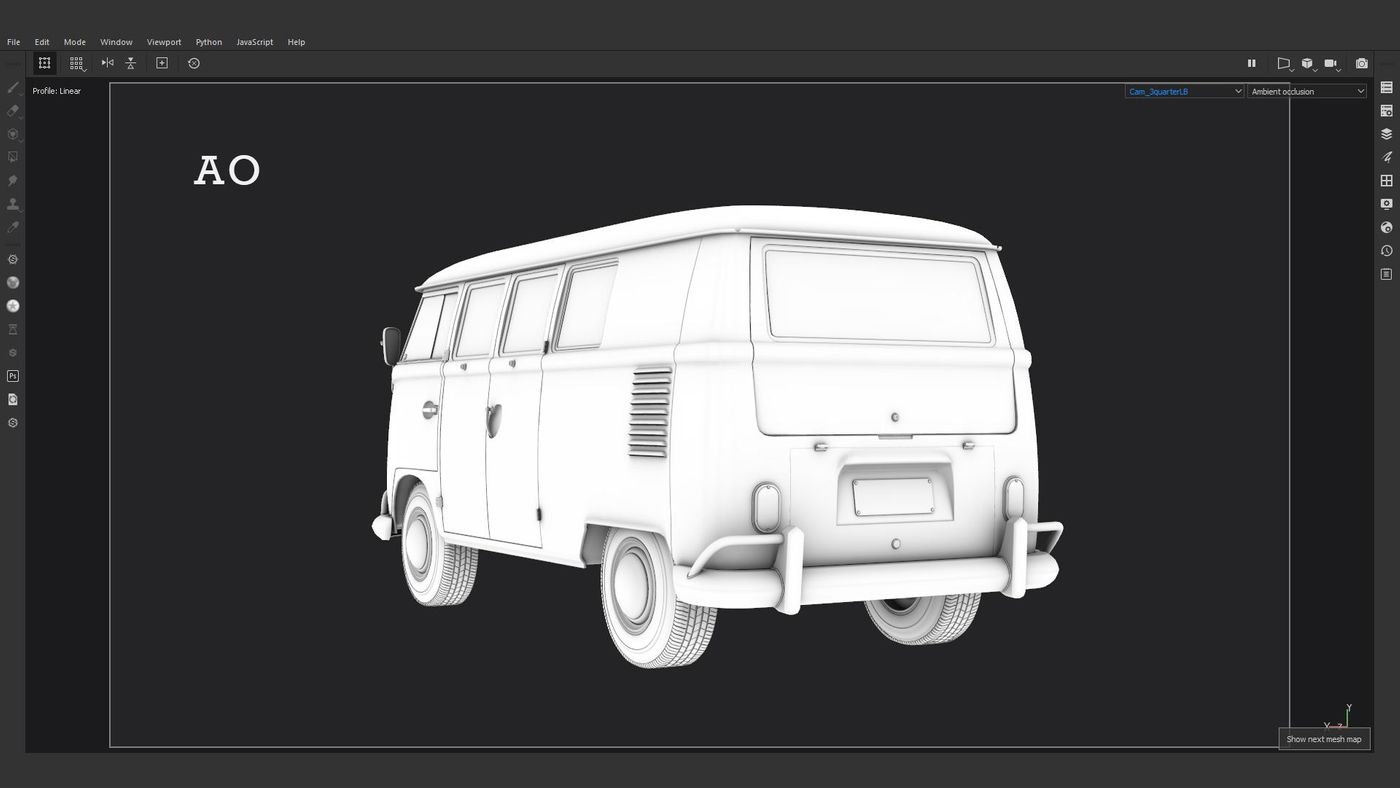 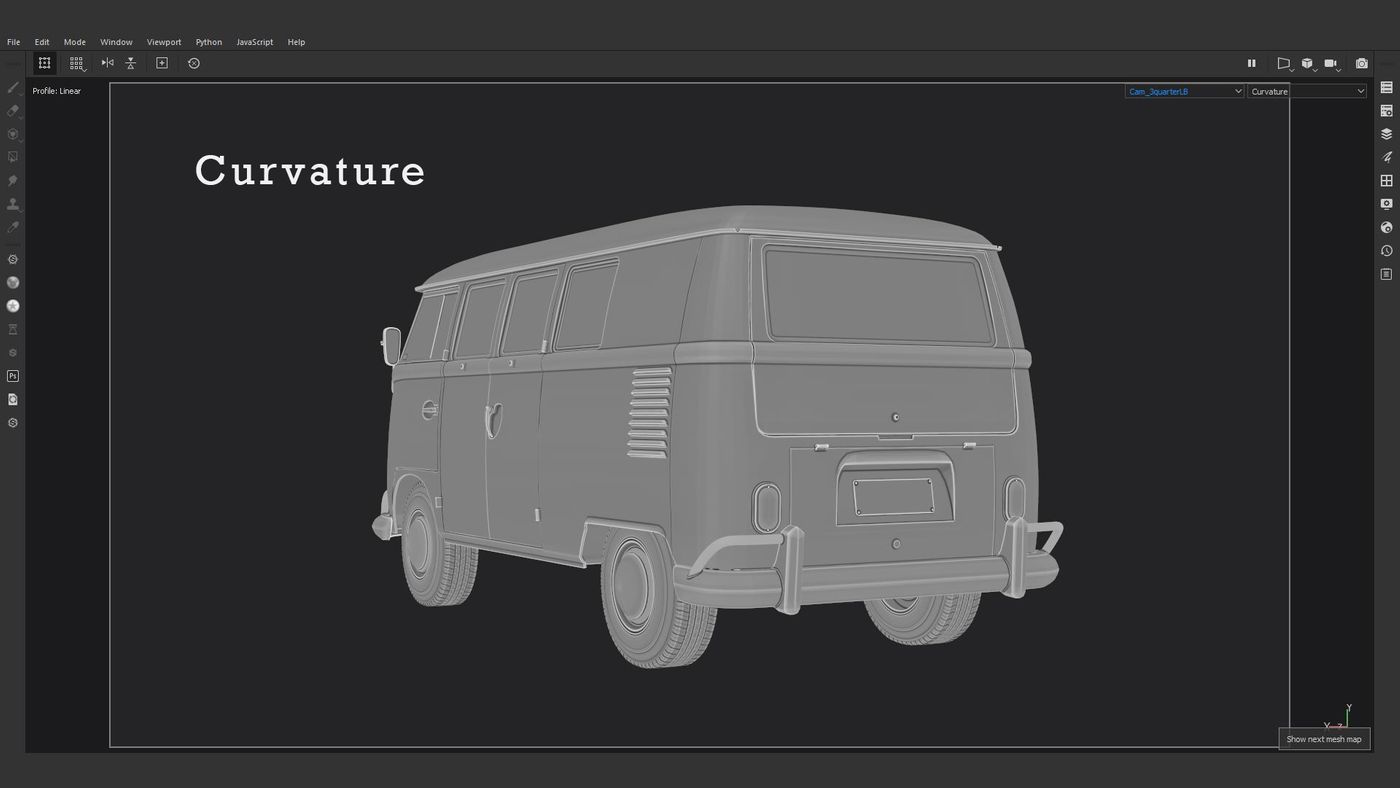 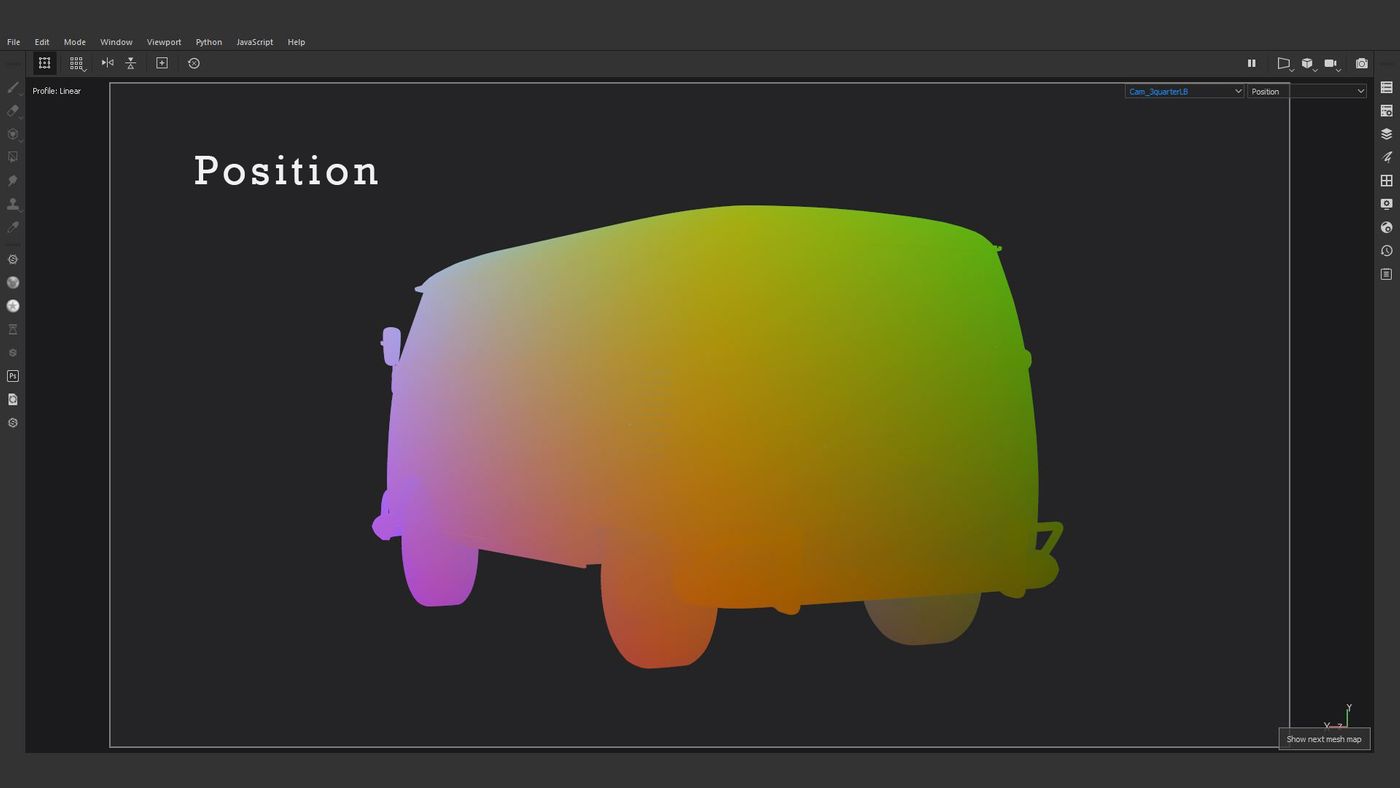 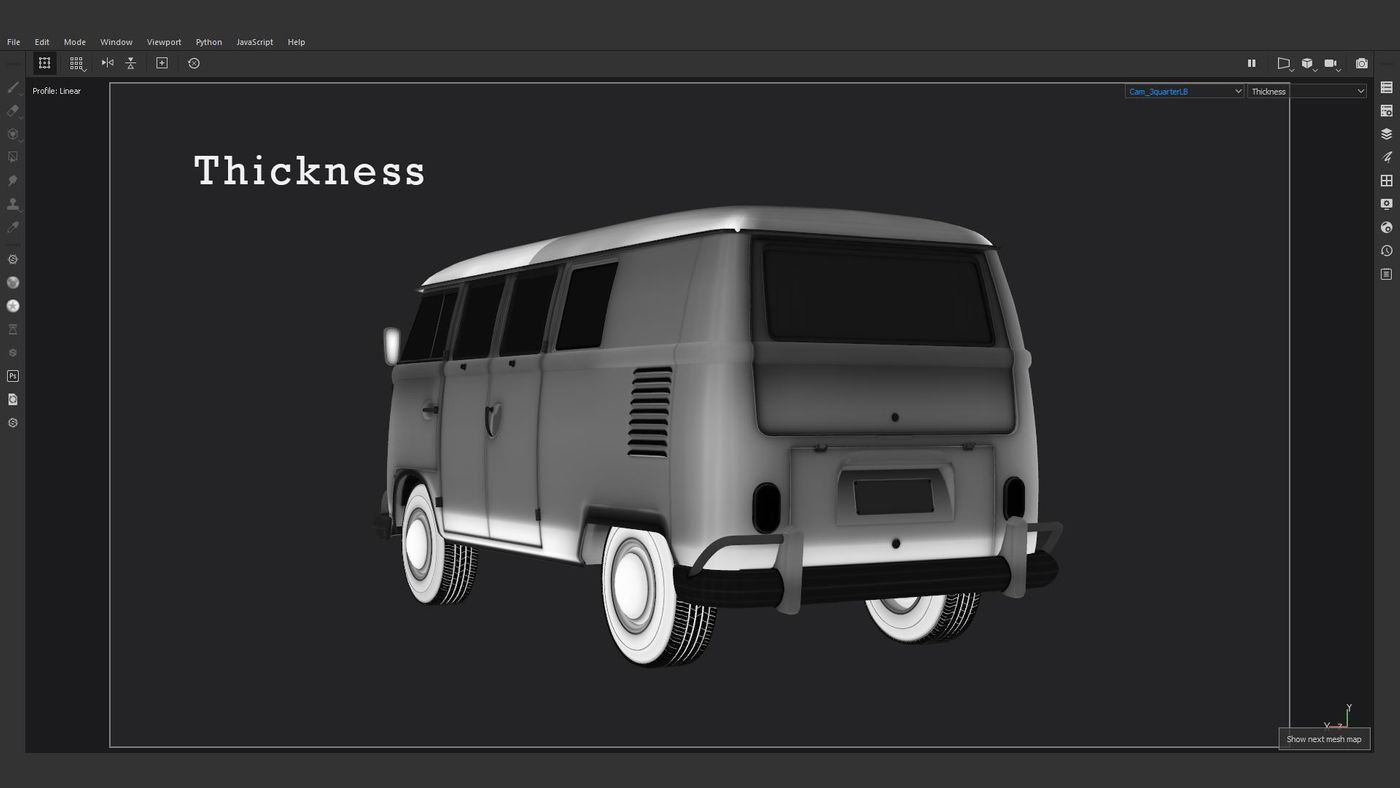 After that, I baked the maps of the Van in Substance Painter as you can see above; I use them very often in my masks, so that's an important part. It took me 8 hours to complete the bake (?!), but the result is good. In the near future, I'll probably re-bake some specific pieces with different parameters (especially AO with the self-occlusion section). 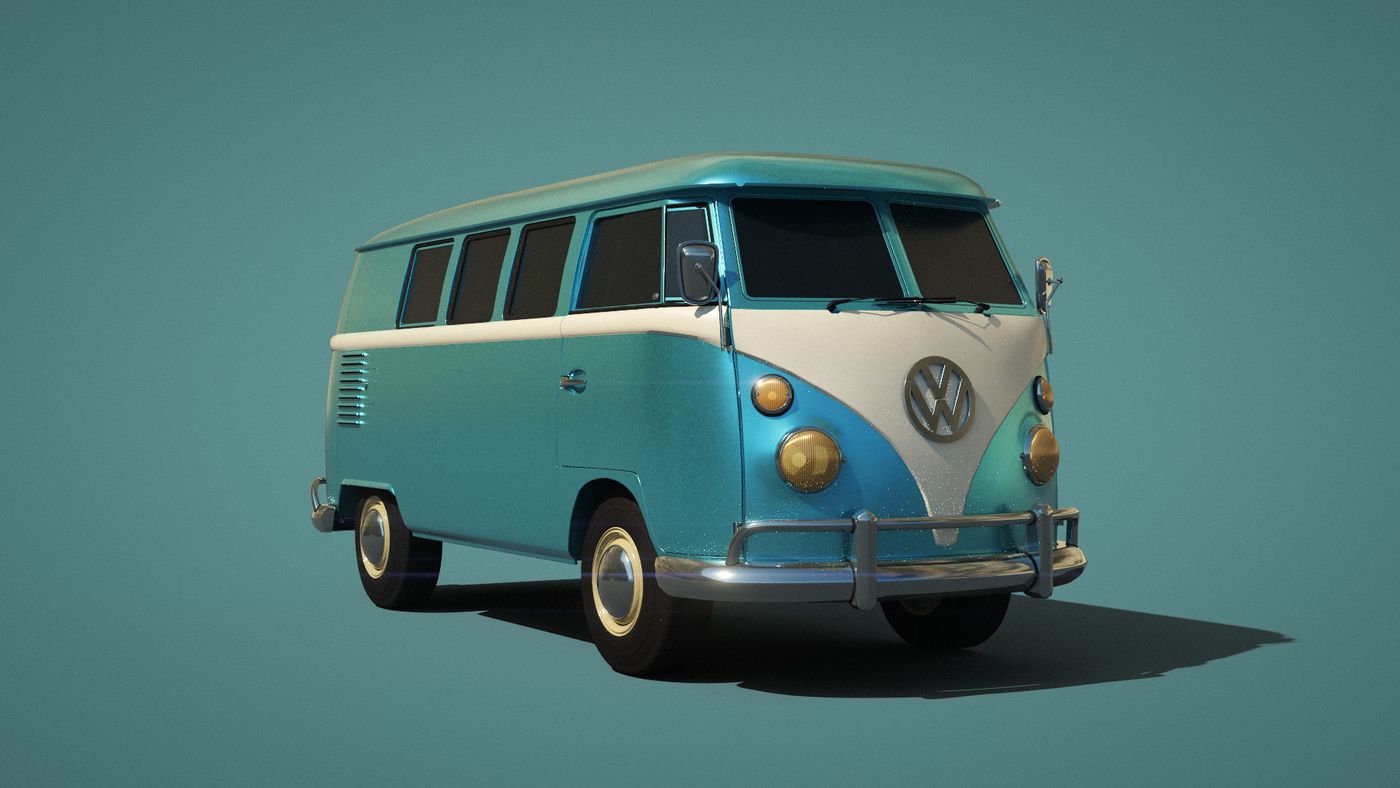 First update, I started earlier but I'll update several versions since I already made some progress.

I applyed basic Fill Layers with different Roughness/Metalness/Colors, to familiarize with the model and to see how it reacts. Great Model by the way, thank you Christina Ryan ! (but I must admit it's a little heavy for my PC haha)

I realized at this stage that I had many  fireflies (the white noise in the front) with my renders in IRay.

Here’s my entry for the Kombi Challenge, I'll briefly explain my approach,  but first of all thank you TheRookies for this contest.

As for me, I'll try to texture my Van following three major lines:

First, I want it to be rusted, worn, damaged and old because for me, it offers more details, realism and I find it more interesting (especially in Substance Painter). That's what will give the Kombi his experience.

Second, I would like my texture to "tell a story". Work is easier when you have something clear in mind (what is not completly fixed for me), you find solutions to achieve your goal. So my idea is to make a Kombi that belonged to a circus/funfair/freakshow to advertise it, or straight as an attraction?

The track 7 "Being For The Benefit Of Mr.Kite!" desbribe the occurrence of a Circus Show, and presents every acrobats and their numbers. I love this song and its atmosphere of funfair, the sounds you hear are gently psychedelic: That gives me a "bizarre" feeling, as if it's disturbing and scary but gentle at the same time such as many Tim Burton's movies for example.

Therefore I would like my Kombi to have this bittersweet mixing between something weird and pleasing.

To sum up everything, I want to texture my Kombi Van as an old(-fashioned) and rusted vehicle that was used someway in a Circus, during the sixties and seventies.

Thank you for reading me! You can find my moodboards below, and I'll update the project as often as I can. 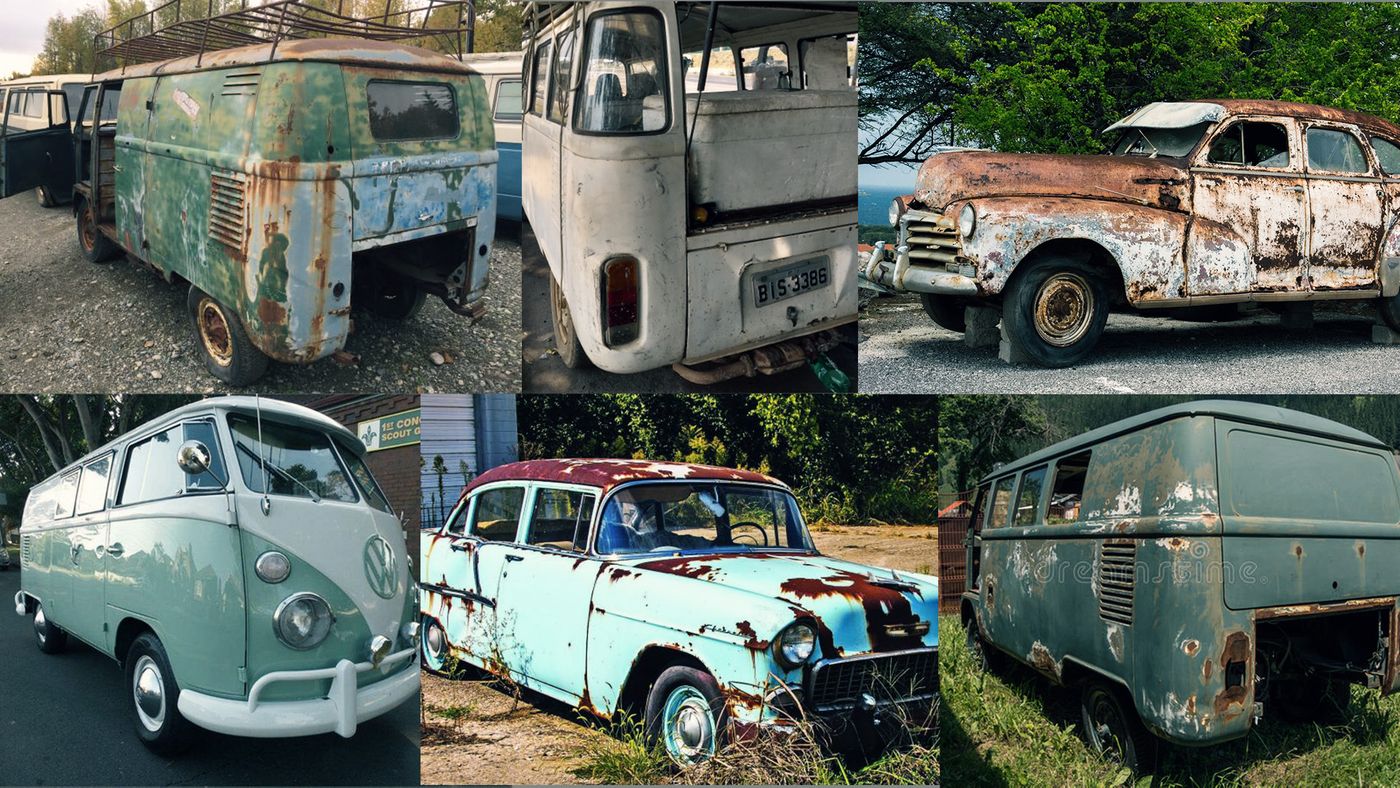 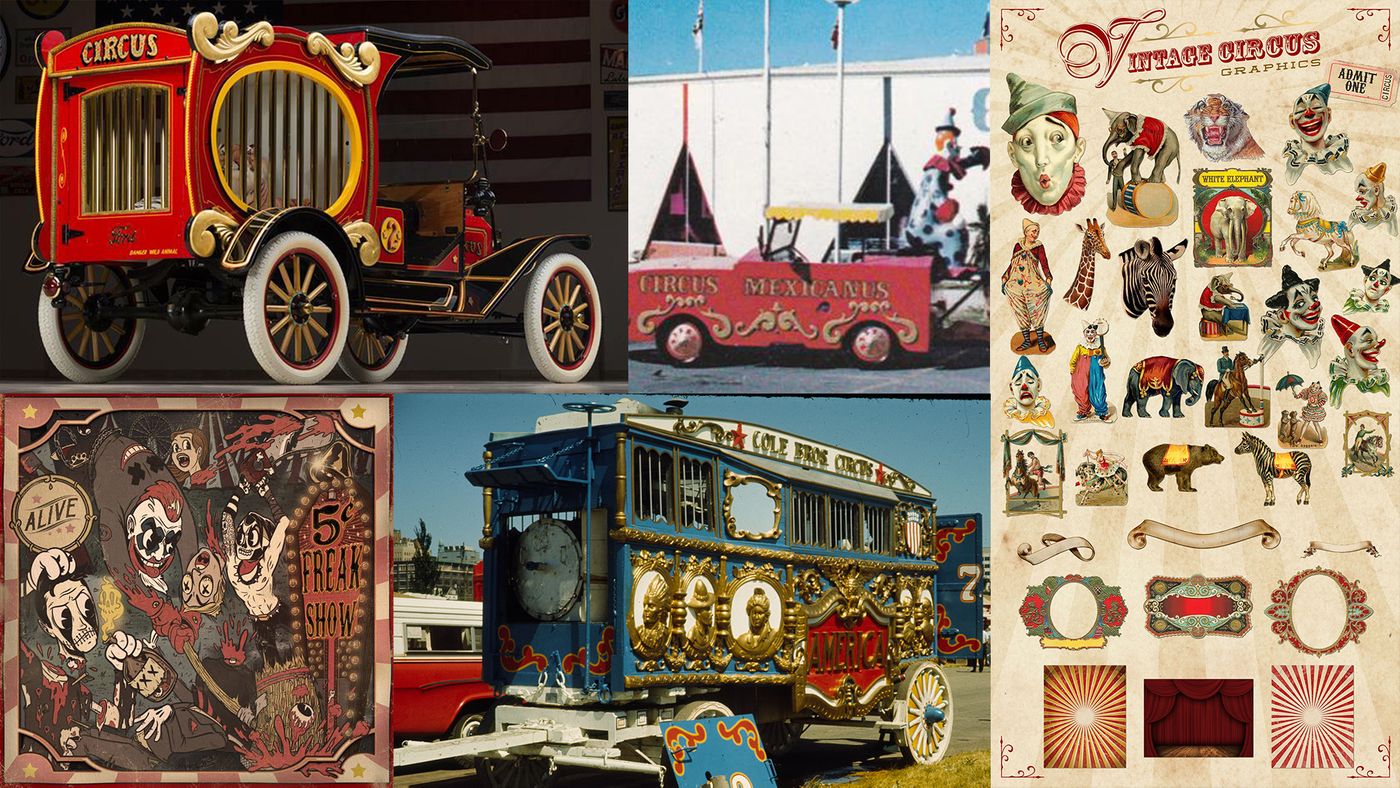 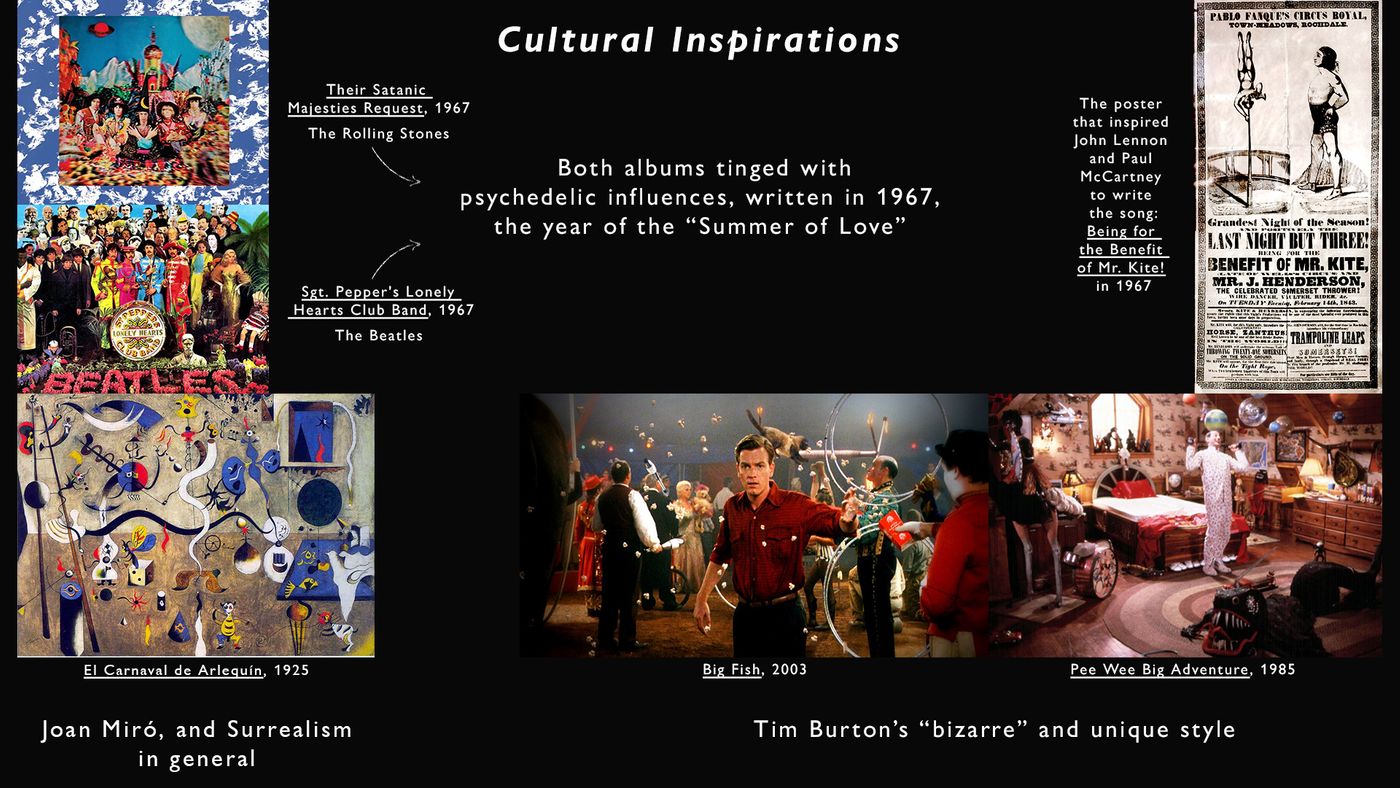