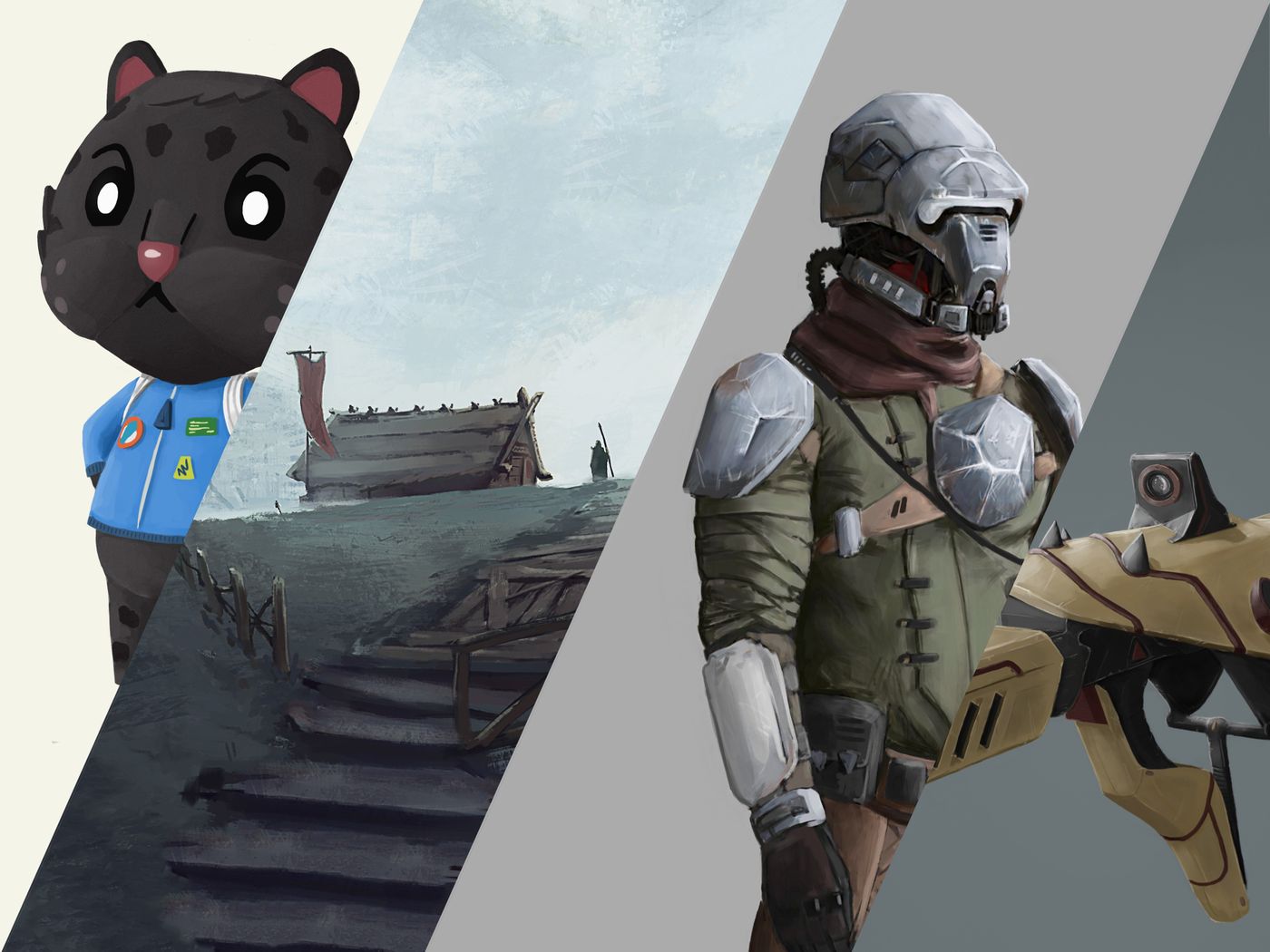 Hi, i'm Josh. I've always loved creating worlds, characters and designing everything in-between. It's my dream to one day to work on films and games. The following is a selection of my favourite pieces of the past year, hope you enjoy!

For this project I wanted to focus on the workflow of designing a character for a film or movie, following a brief exactly and working as if it was my job. The story is about a bounty hunter, a bit passed his prime, fighting to survive on a cold planet full of like minded people.

Setting: Sci-fi. Distant future. Character: A generic bounty hunter: experienced but not the top of his game, not wealthy. Human male, 30-35 yrs old. Scavenger, may have mismatched gear.Environment: Harsh, old environment. Back water planet. Theme: Just getting by, full of opportunity but the days of optimism and fun are over.

I started with designing the helmet first, as It would be the most important element for this character. Since he would be a scavenger, his outfit might change but his helmet would be his identity. 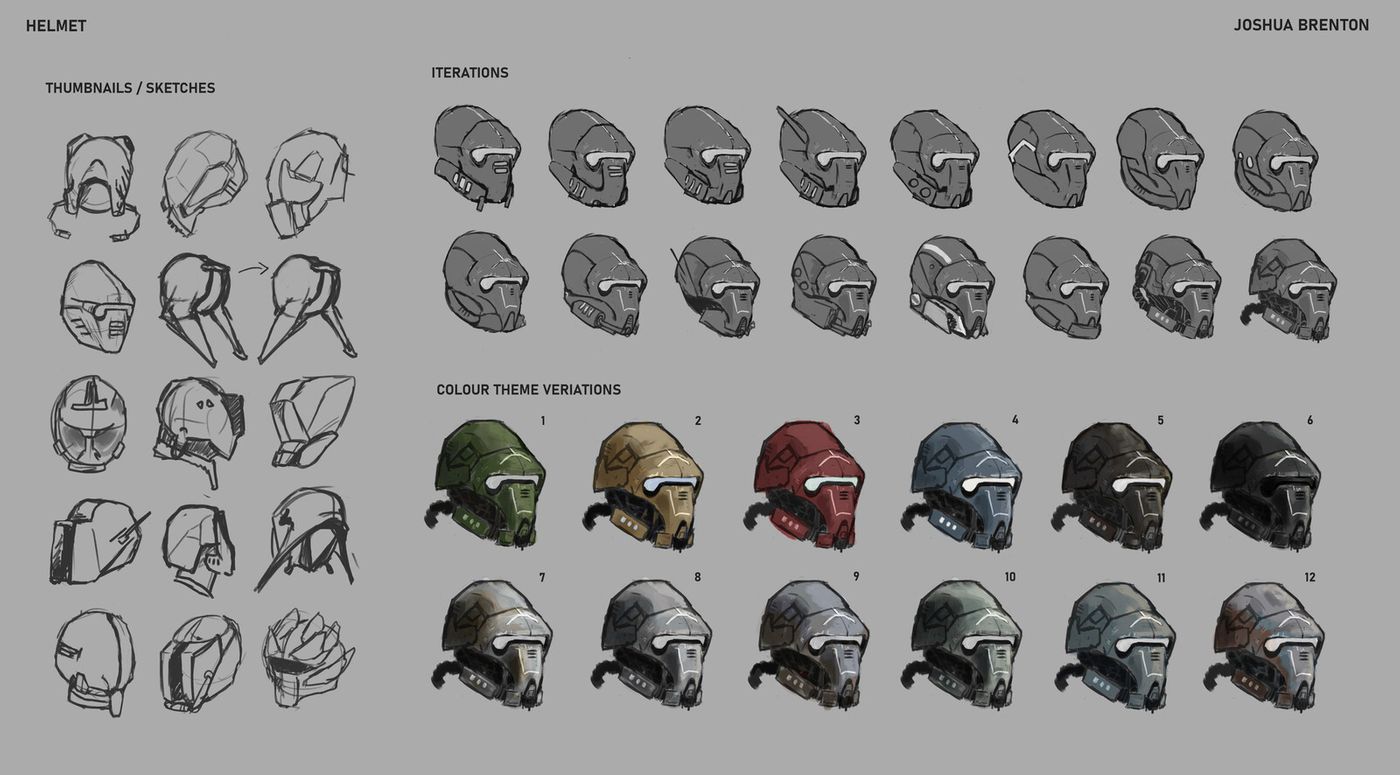 Next I focused on the rest of his look, thinking about capturing his story in his clothes and applying the chosen colour scheme to the entire look. 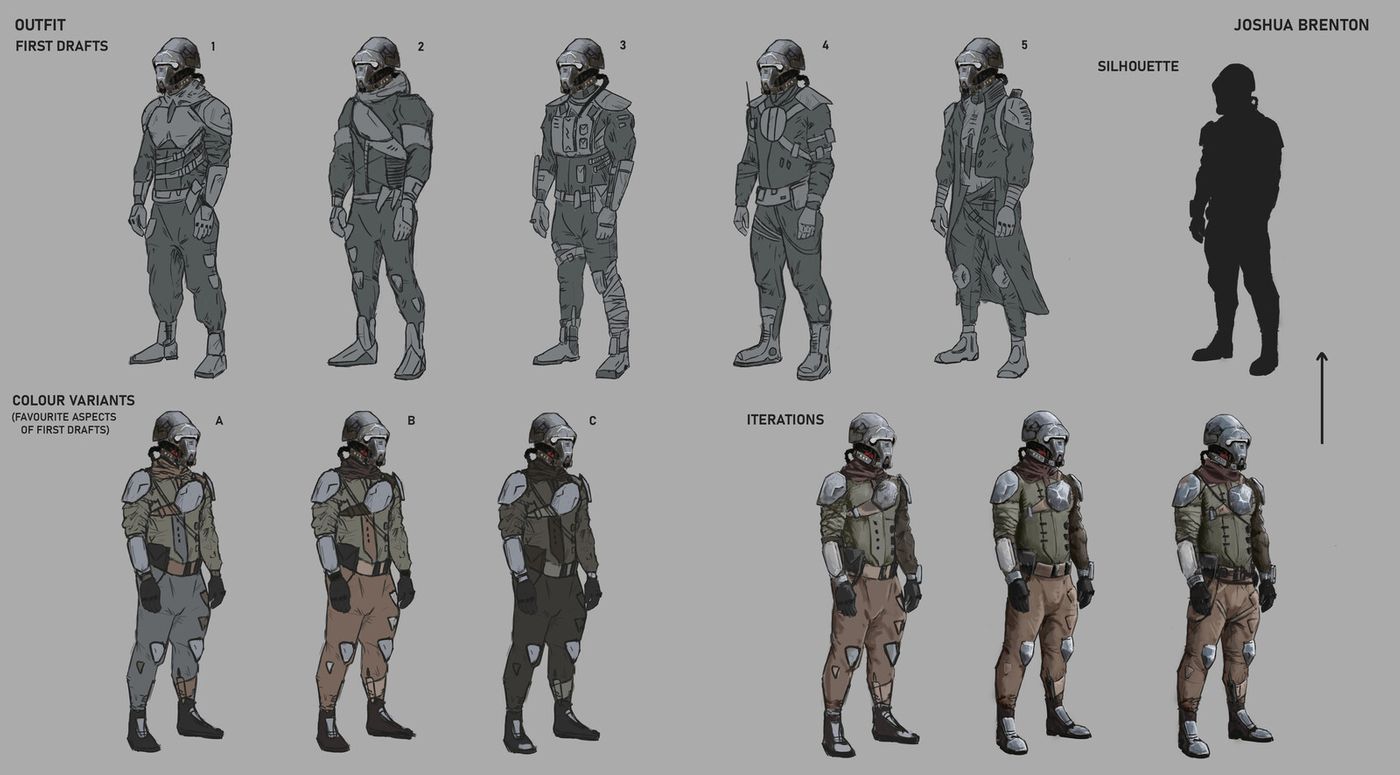 I really wanted to reflect the story and general feel of this character, so I added elements that would show he was in a cold environment, had old and damaged clothing/armour and had the need to scavenge for replacements. I also thought it important to show different angles so an accurate real life model could be made, as well as showing an example of the person that could be under the helmet. 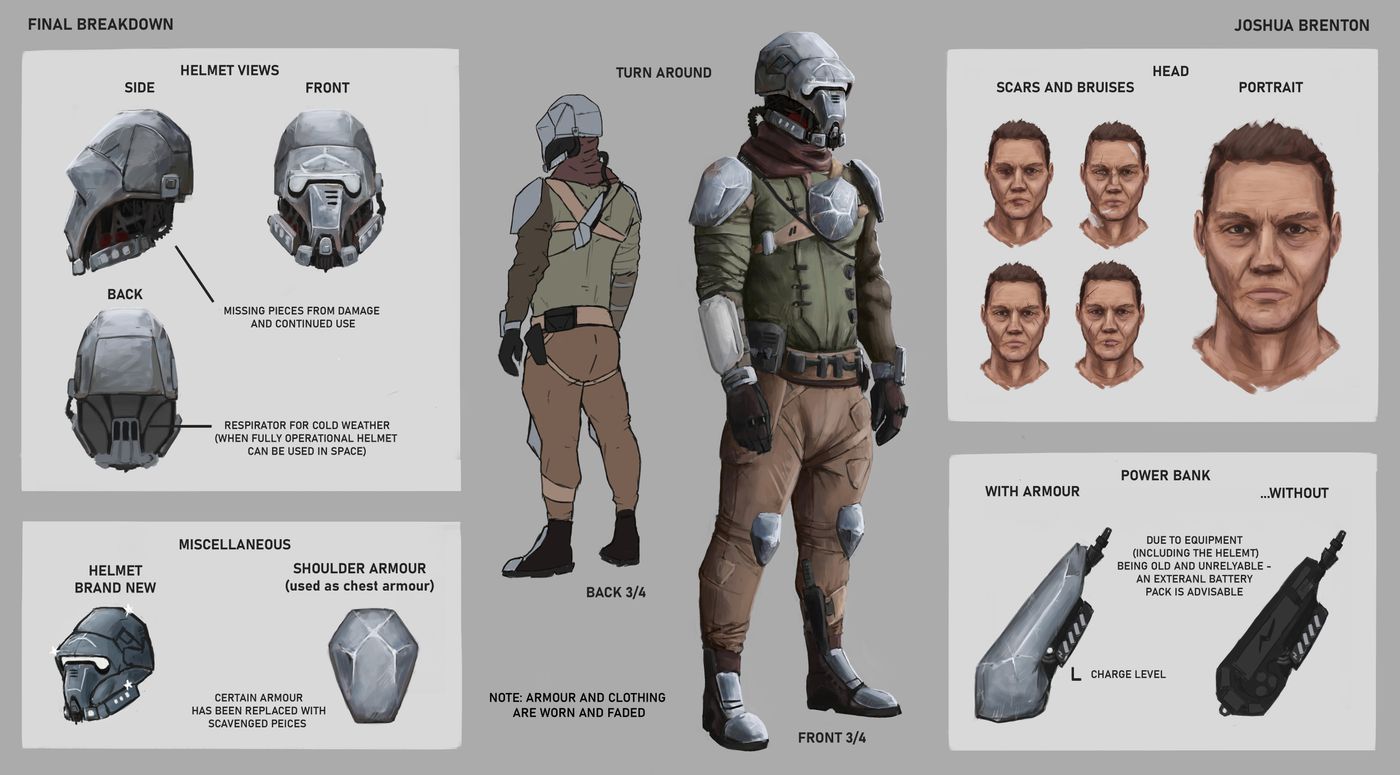 Cover art I did while studying 'Narrative Illustration and Characters' at CGMA.

Setting: Space Opera / Location: An orbiting palatial space station/platform with view of a planet / Action: Aboard a high-tech orbital space palace, a fight is breaking out between the UNITED PLANETARY FORCES and THE SCOURGE / In the foreground is our main character, the CELESTIAL ARBITER / Focus: The CELESTIAL ARBITER and their combat prowess / Mood: Chaotic, a standoff between good and evil 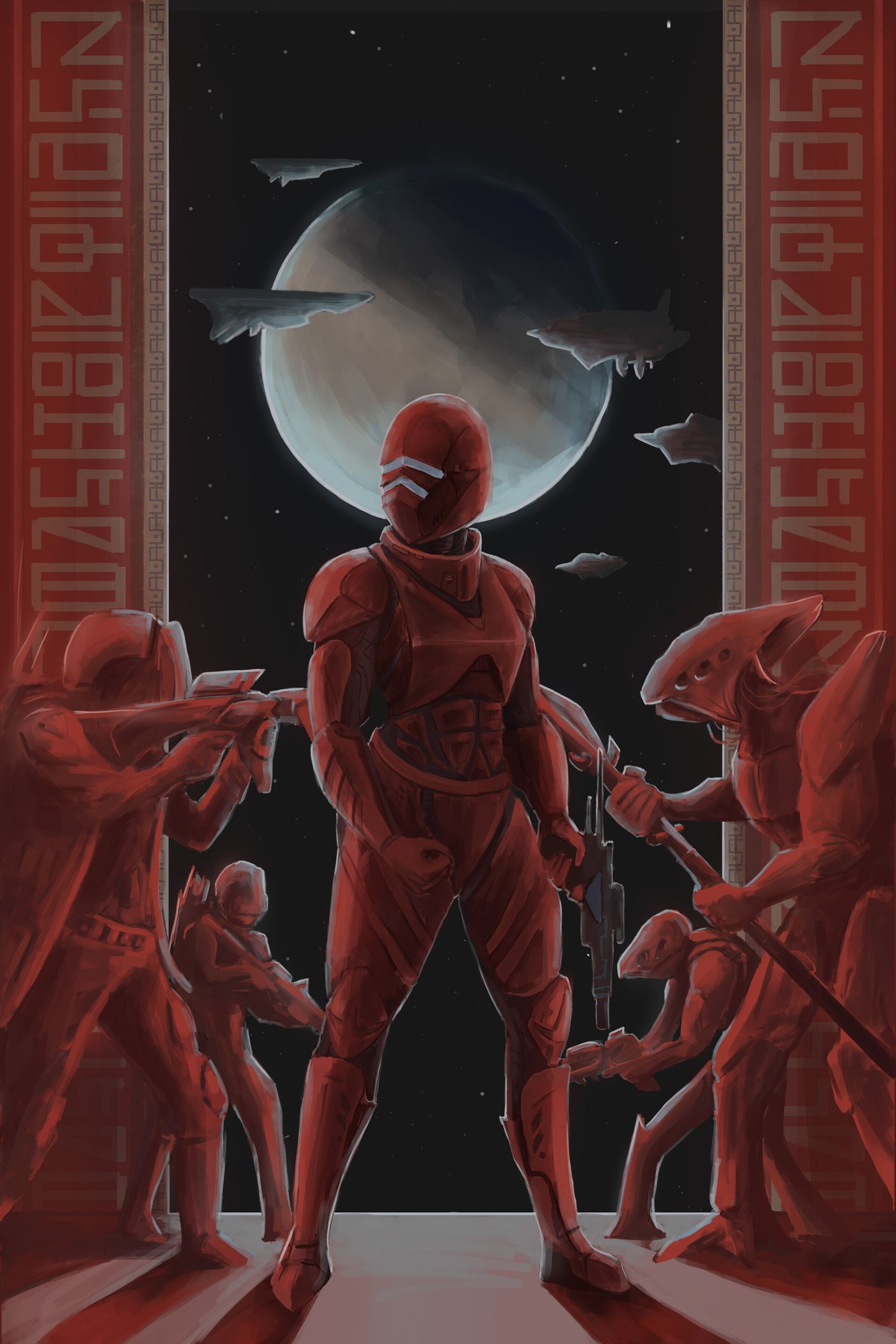 Since this character is meant to be in a game I wanted to show different levels the character could progress through. 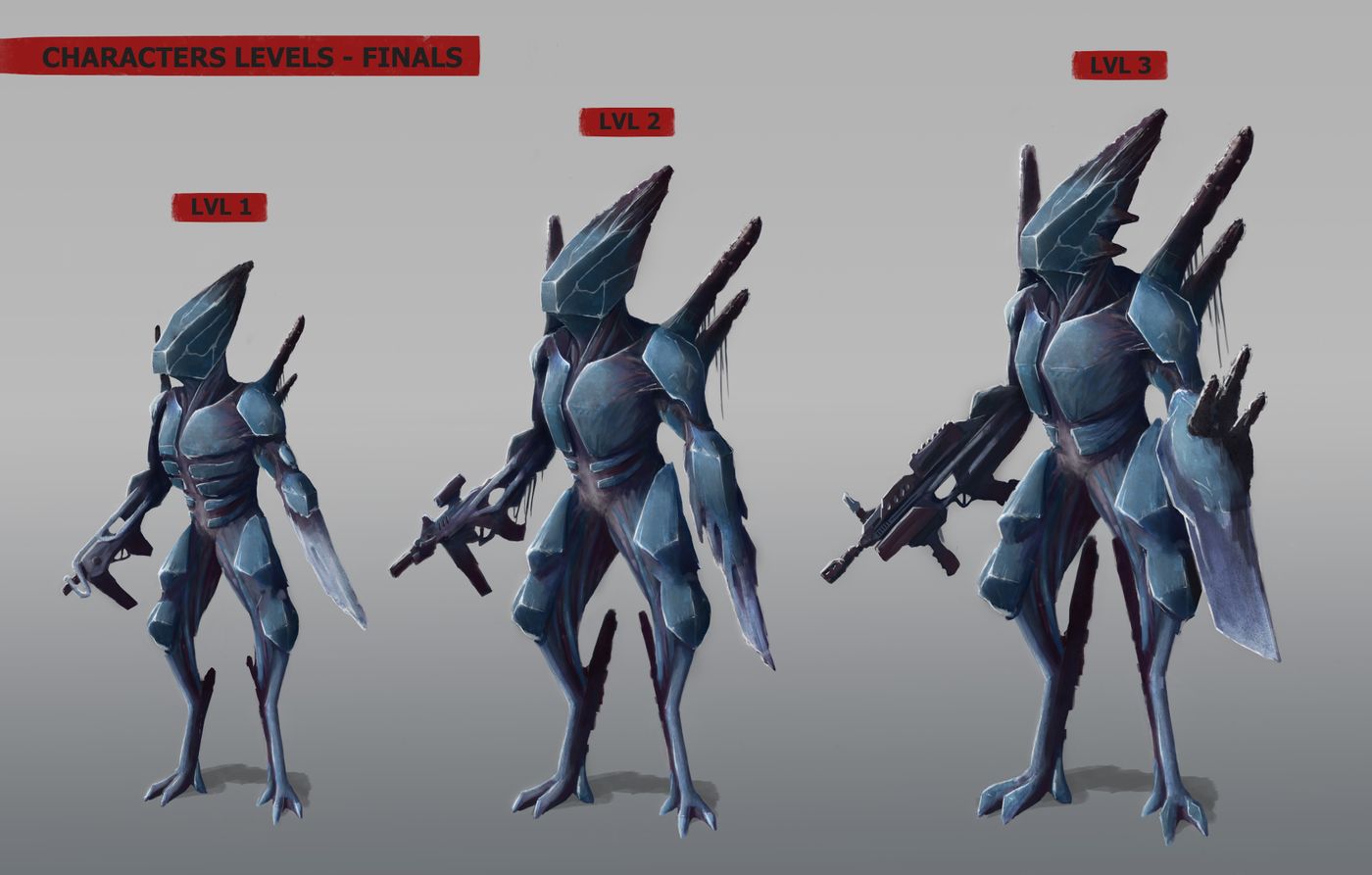 In an effort to do something completely different, I made some Animal Crossing Fan Art. For this work I wanted to challenge myself to create a character for an existing IP, really focusing on creating something new while understanding the design language of the existing characters, Forcing me to work in another style not determined by me.

I wanted to create a prop for an larger story, really focusing on creating my own world and presenting it well -  specifically for a game. This project is meant to look and read like a Art of book, with every iteration I wanted to show a specific use for the design choices I made. The story would be set in a world of many planets and empires, where one has a large military that spans across all kinds of environments.

While designing this weapon, I wanted to show possible designs for different purposes. 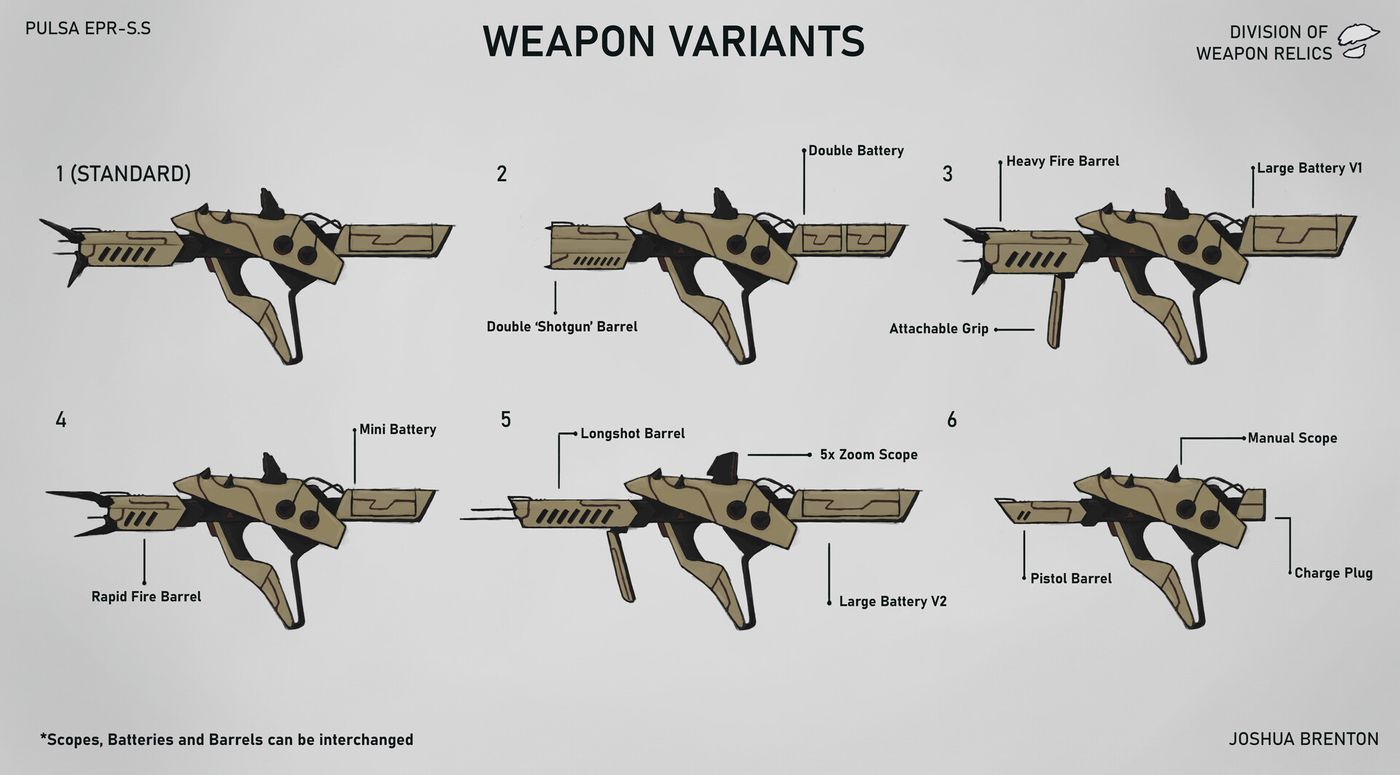 When it came to colour, I made sure each paint design I came up with reflected a story and clearly showed where this weapon would be used. 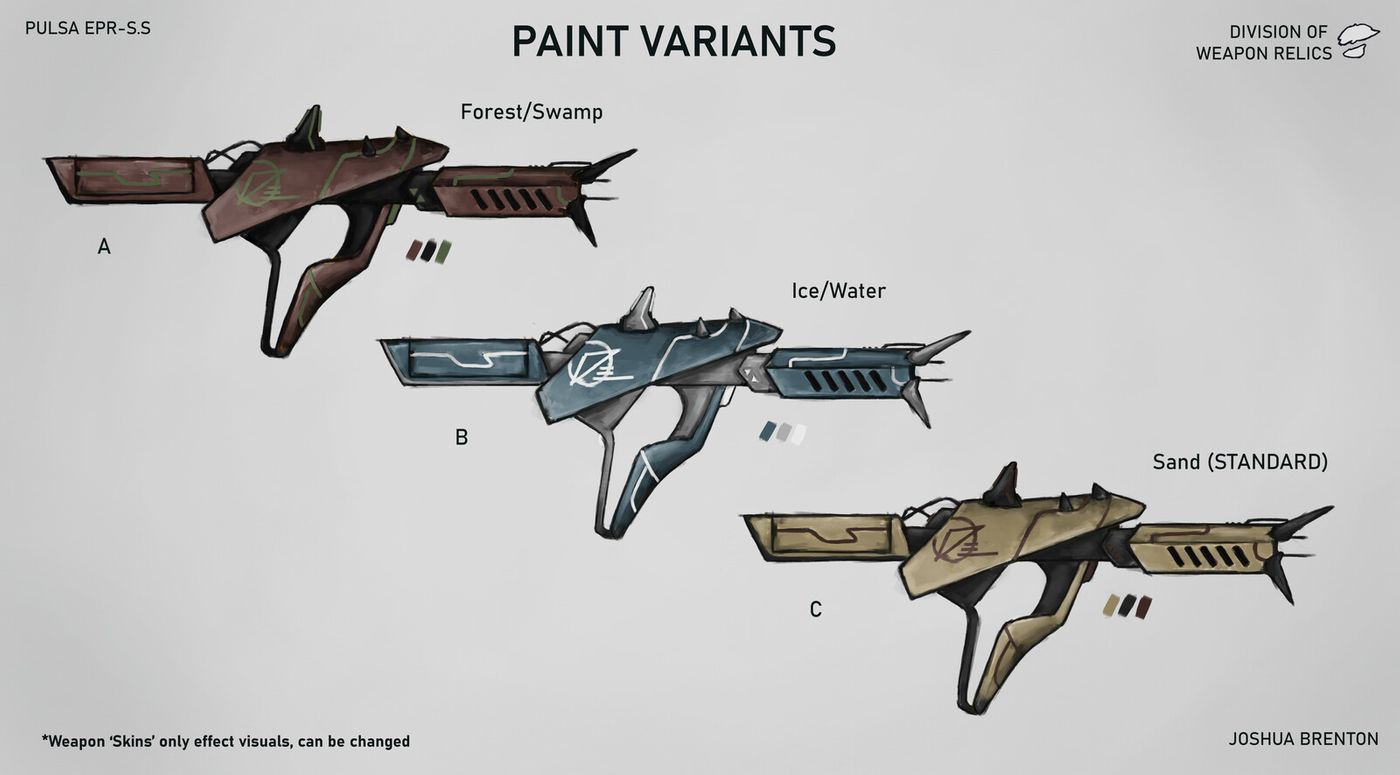 Going into detail and understanding how this weapon would work and how it would look from all angles was important to me to further show a story and create something that could be made into a 3d model. 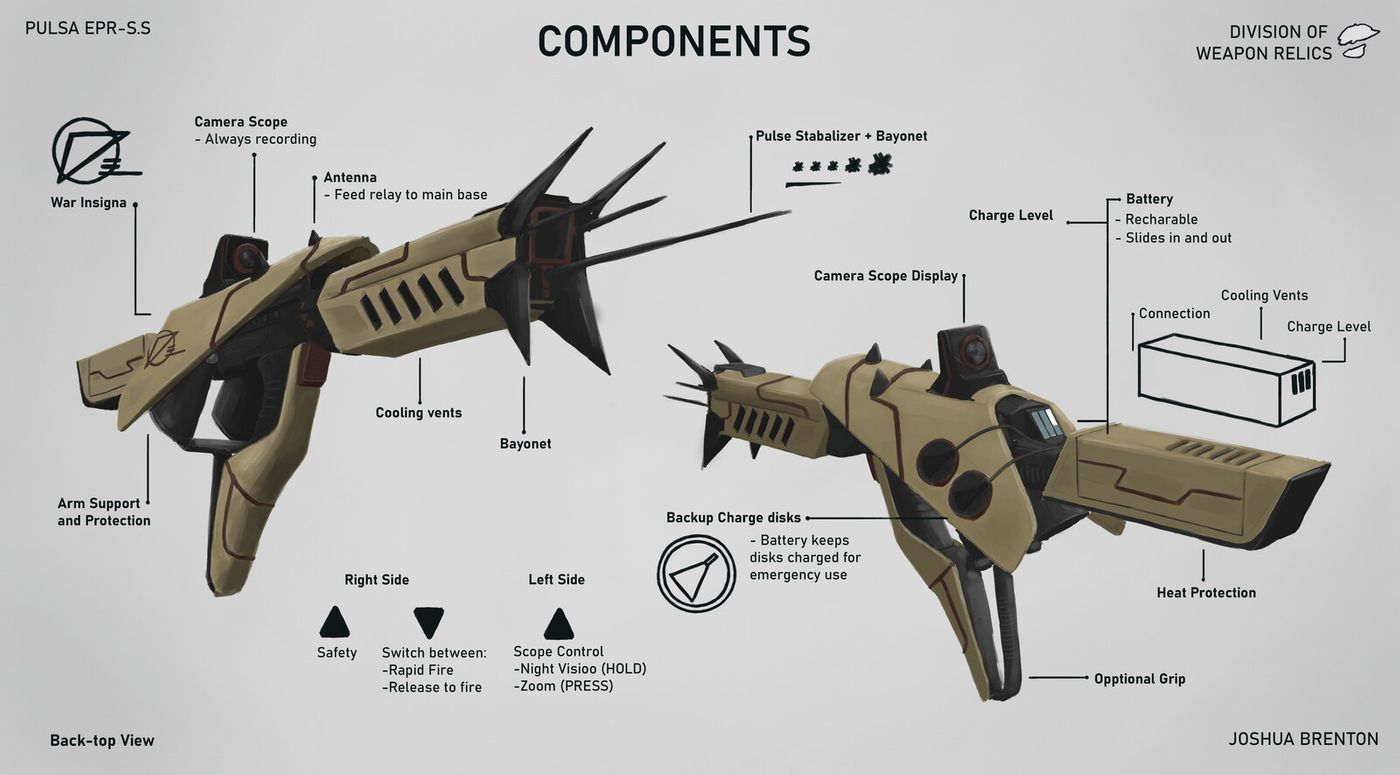 To show off my final design I chose to present it like how it would look in a video game's weapon selection screen. I thought it would be a good idea to test out how the weapon would look like if selecting it in a game. 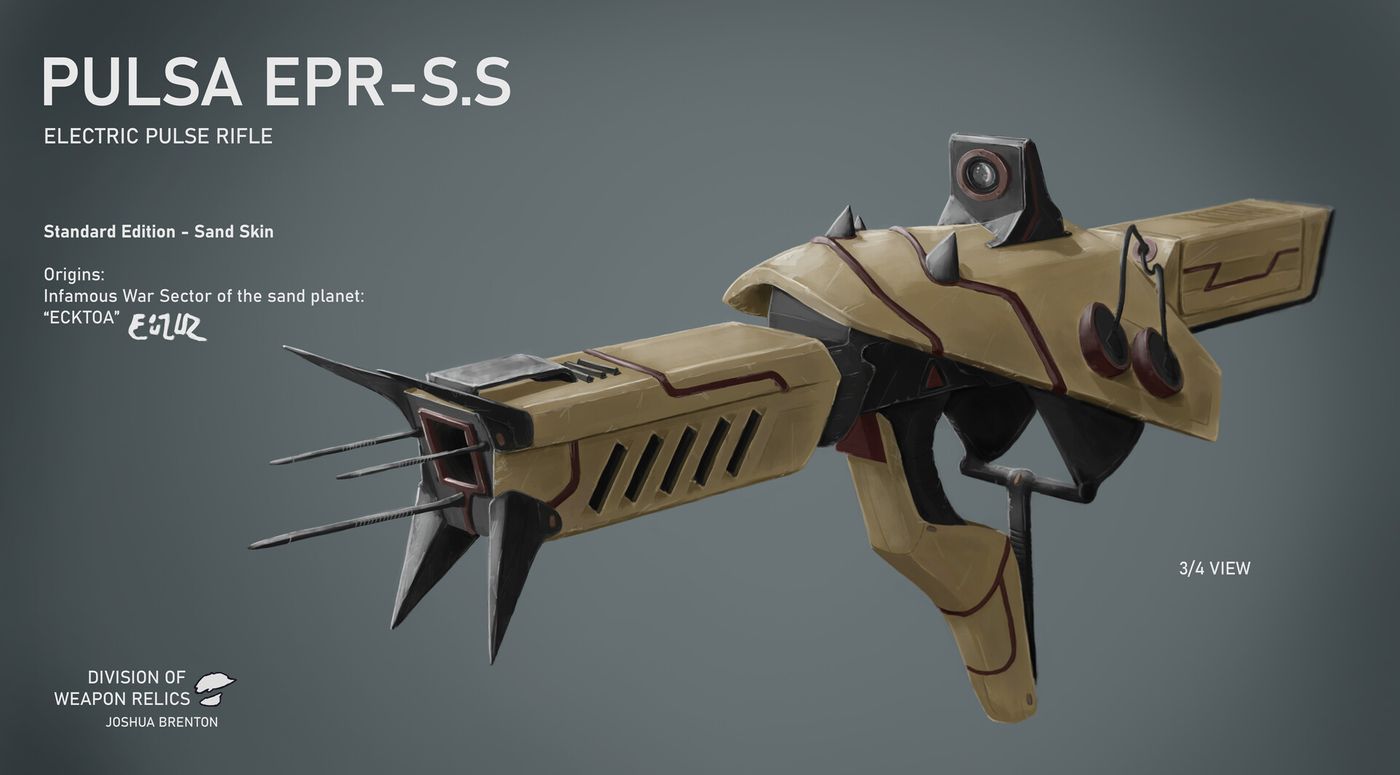 For this last project I focused on capturing a story In a single image, creating something that could potentially be seen in a film or TV show. The main thing i wanted to communicate is the mood of the story.

My process for this piece: Starting with a brief, I do a lot of research and reference gathering, thinking about all possible designs that would show the brief best, while also creating a story. Next I make heaps of rough thumbnails, before picking my favourites, focusing on the composition, shapes and overall feel. 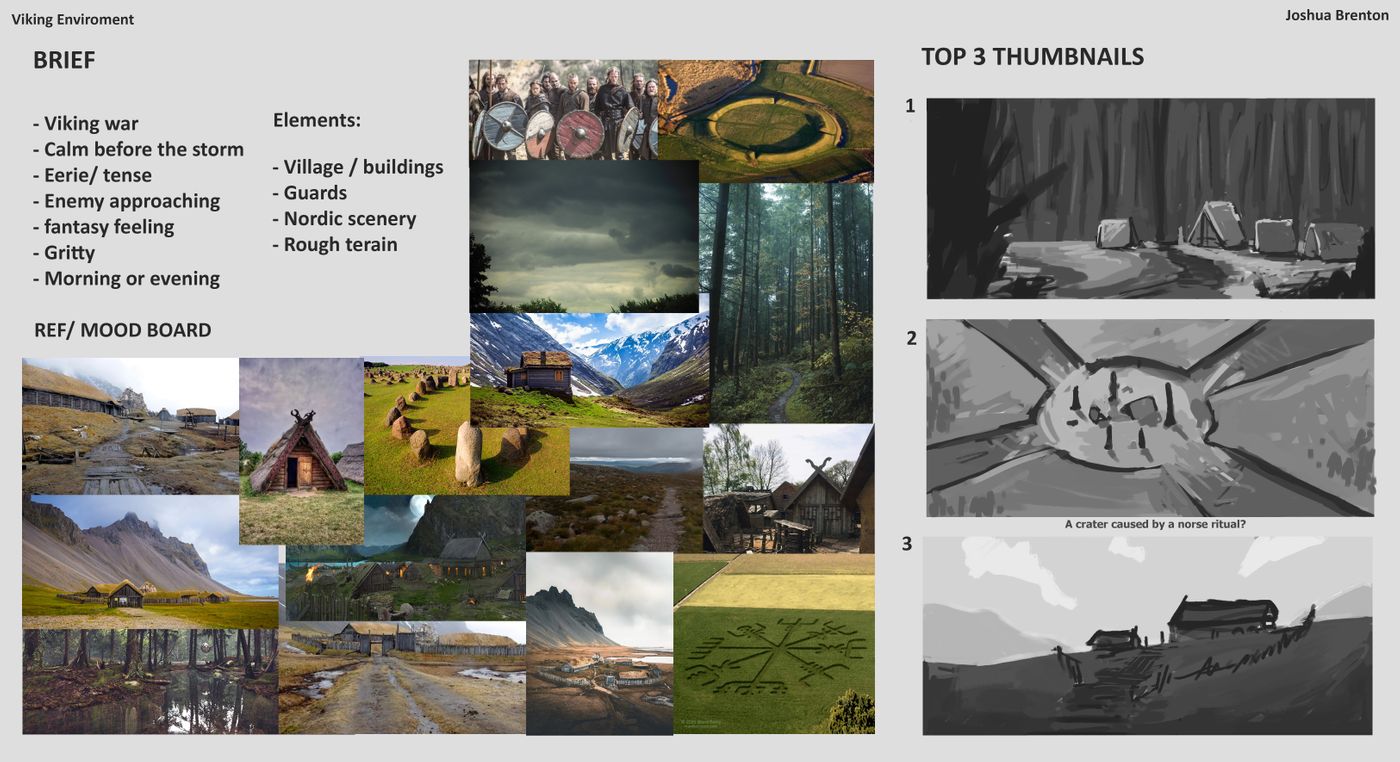 ...after playing around with my favourite three thumbnails, I pick one and refine it. For this piece I wanted it to be extremely moody and look like a shot in a film, so went ahead and tried out a bunch of different colours that matched the mood I was going for.

My normal process is to go straight to colour but  it's important to practice other methods, so I started with greyscale and I recreated the chosen design and solved everything, then coloured, also adding some final touches.

Thank you so much for checking out my work, I hope you enjoyed viewing my art as much as I did making it. 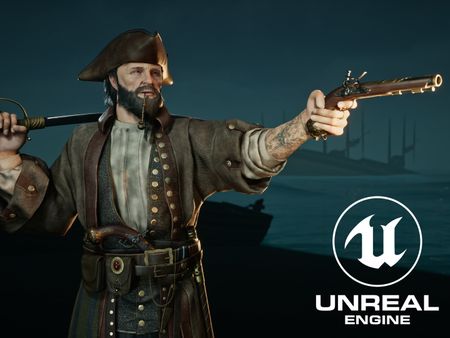 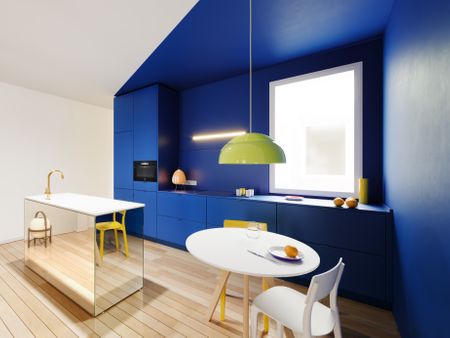 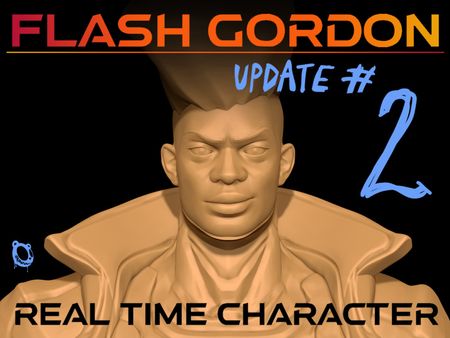