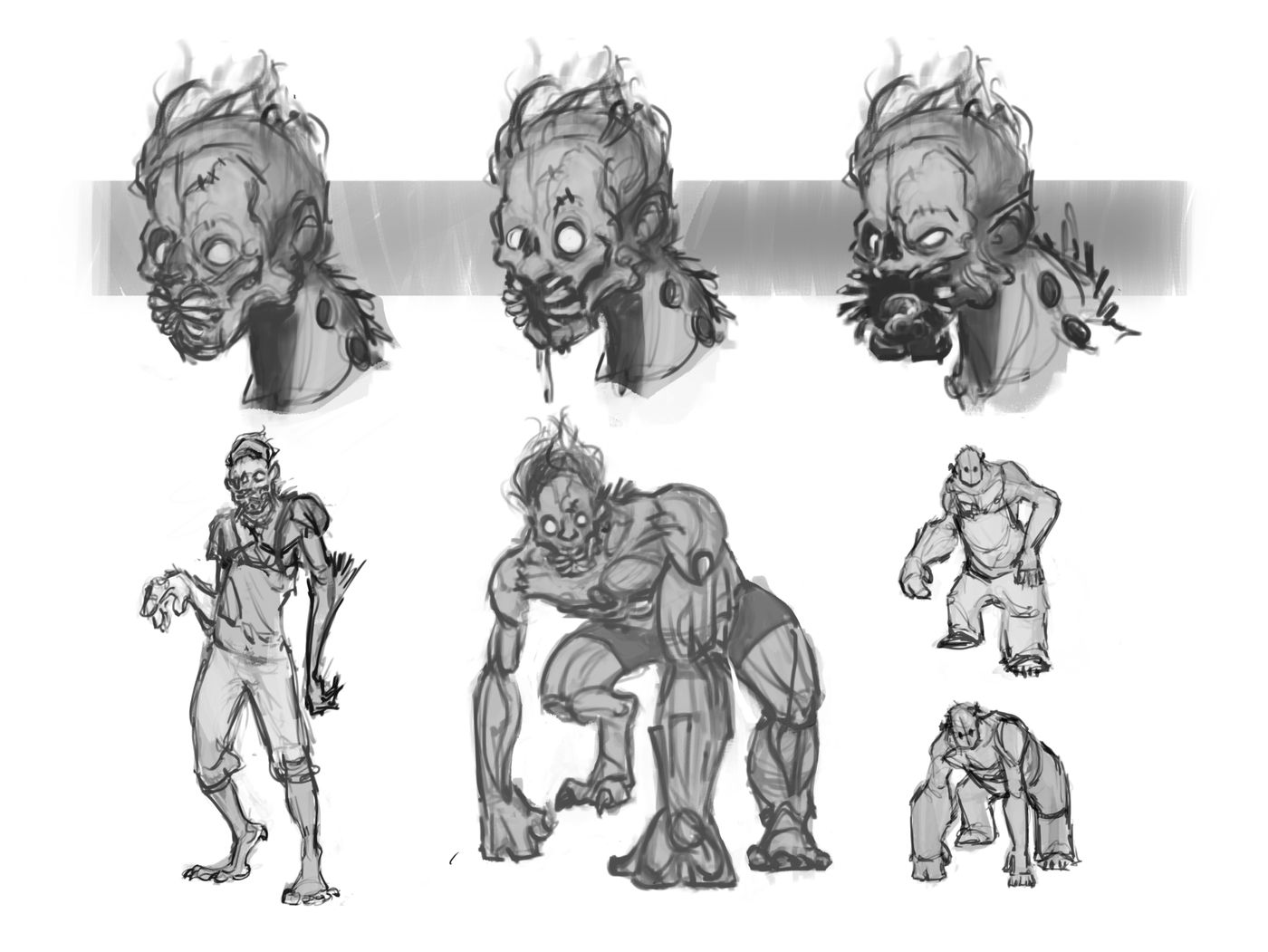 by anjaregnery on 1 Mar 2020 for Monster Challenge

My entry for the Frankensteins Monster Contest 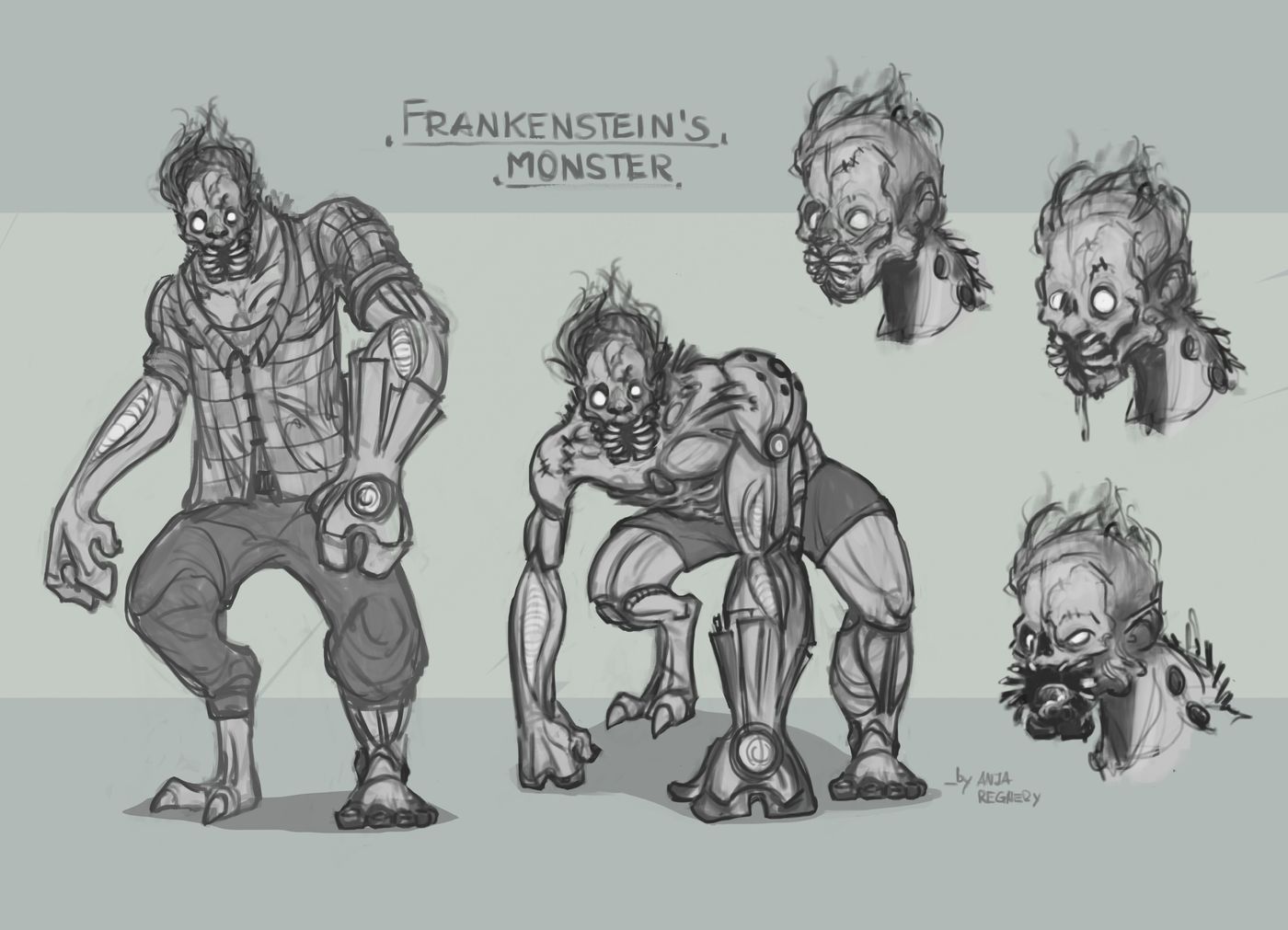 Final update, character concept with the 2 relevant poses (bipedal and quadrupedal)
extended by some facial expressions. 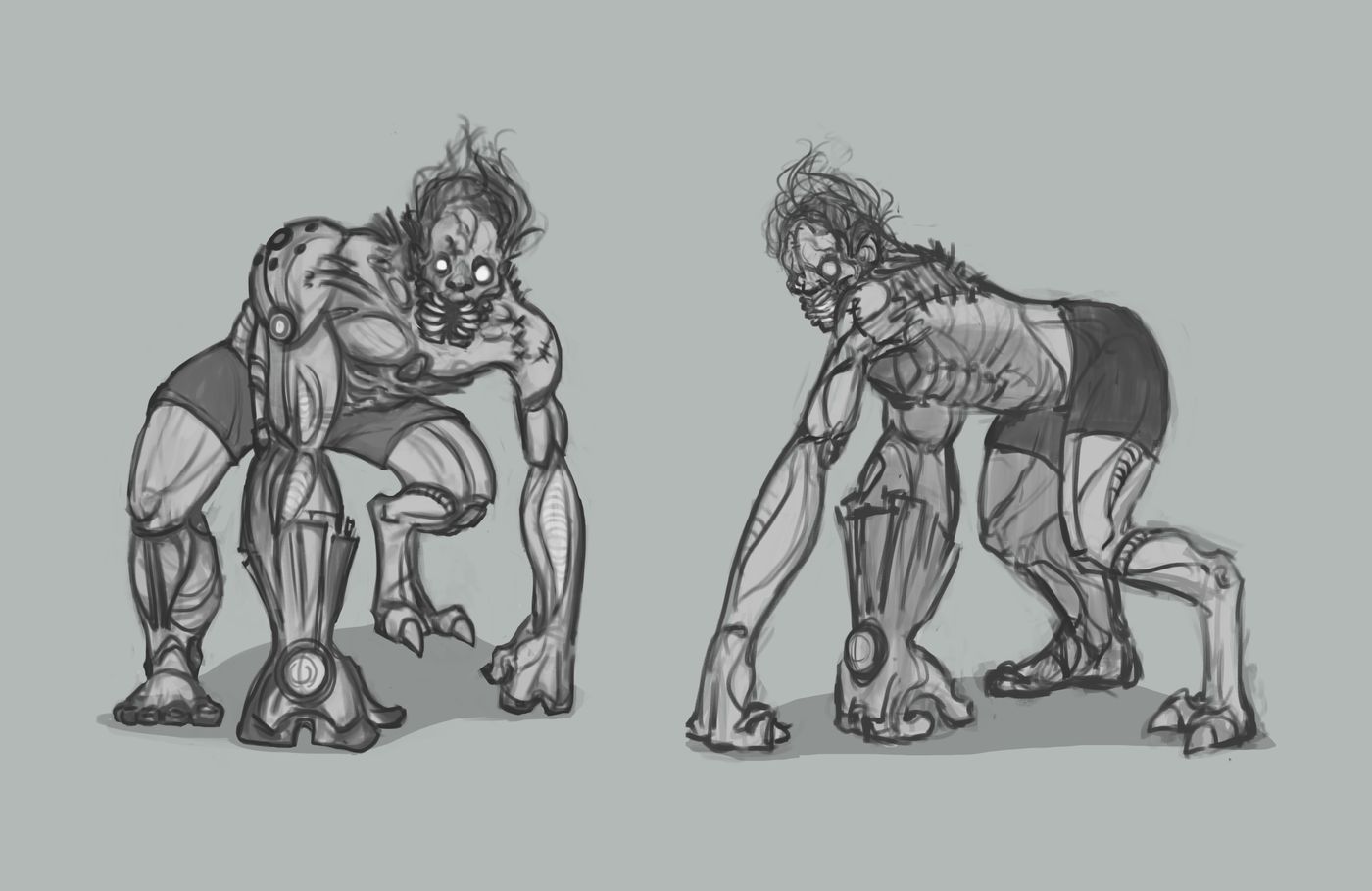 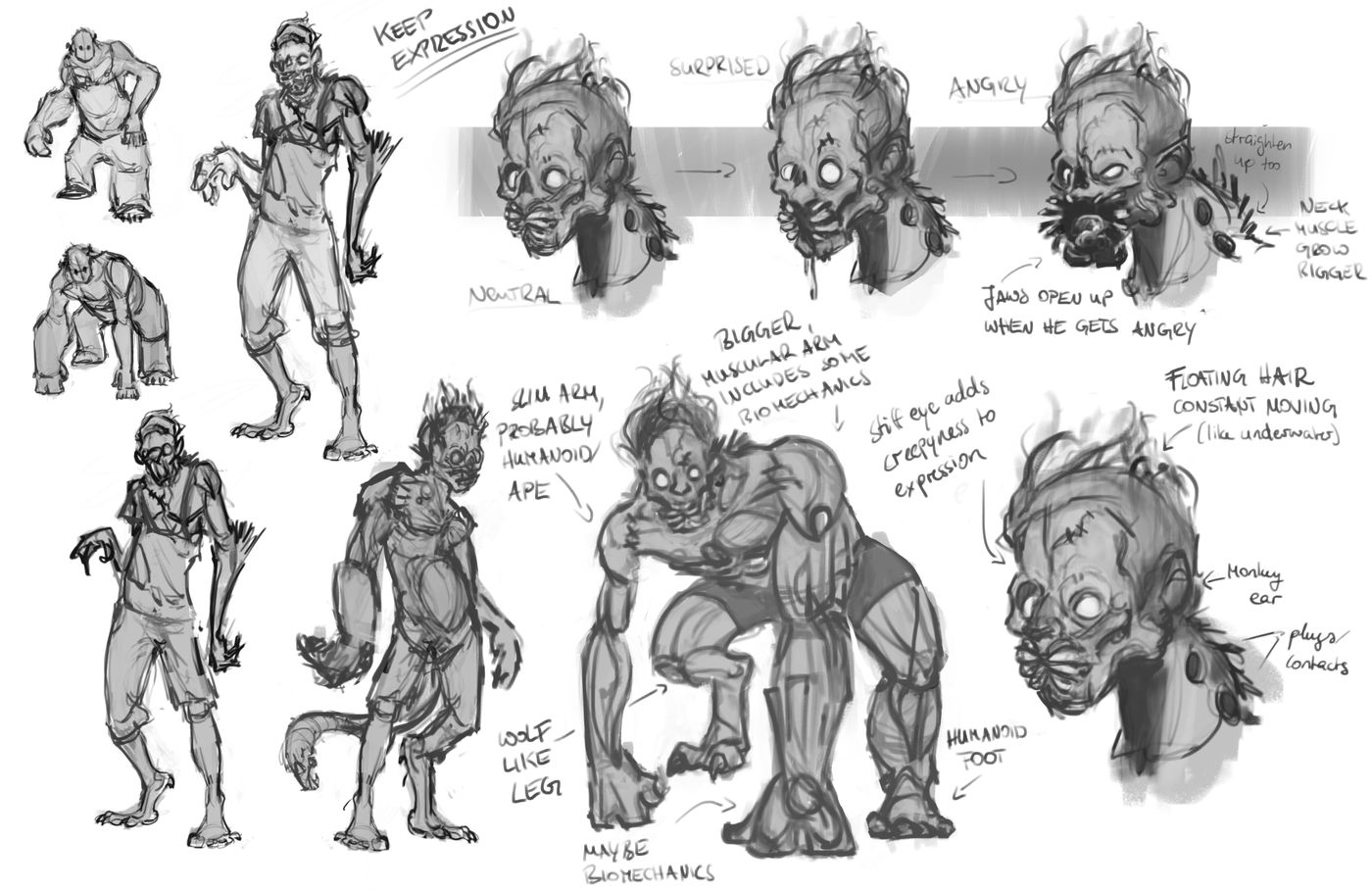 Here I explored the monkey like approach that I got from the provided video material.

I found it quite important to keep the face humanoid enough to show emotions. Frankenstein's Monster is a character that will be twisted by its feelings, so it is essential to give the character the ability to switch from sadness to anger. I gave him some feautures that change when he gets angry, such as the hair on his neck that straighten up or the teeth in his jaw that open up.

His general posture should be strong and muscular but not too bulky. I found it interesting to experiment with the proportions. He could have 1 slim and 1 bulky arm, similar to his legs. The variation in size makes it interesting. I think it would be nice as well to change 1 leg to a more animal-like anatomy (maybe like a wolf's backleg).

His movement would probably become a bit  off balance as well. He would favor the stronger side when it comes to things like running, throwing stuff or doing angry or forceful movements. His leaner side takes over when his  intelligent, sad and calm side is in action. His left eye is humanoid, so there he can show off his emotions. His right side is more stiff and monsterlike. It adds some sort of creepyness to his facial expressions. 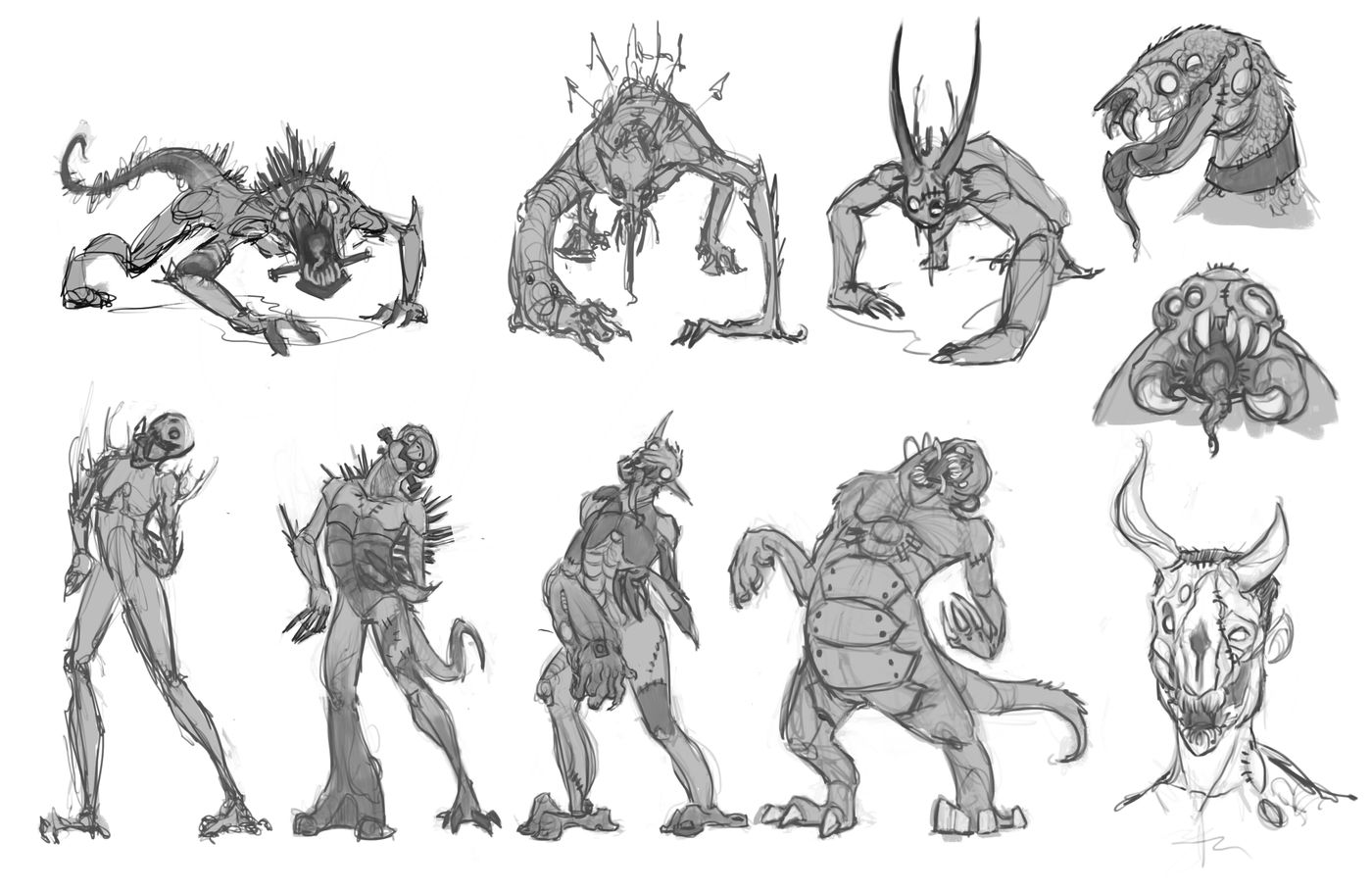 The provided video material shows various motion sequences. I got the impression it was important to figure out how much of a real human face and body is necessary or wanted. So I tried to come up with some more animal creature like monsters. 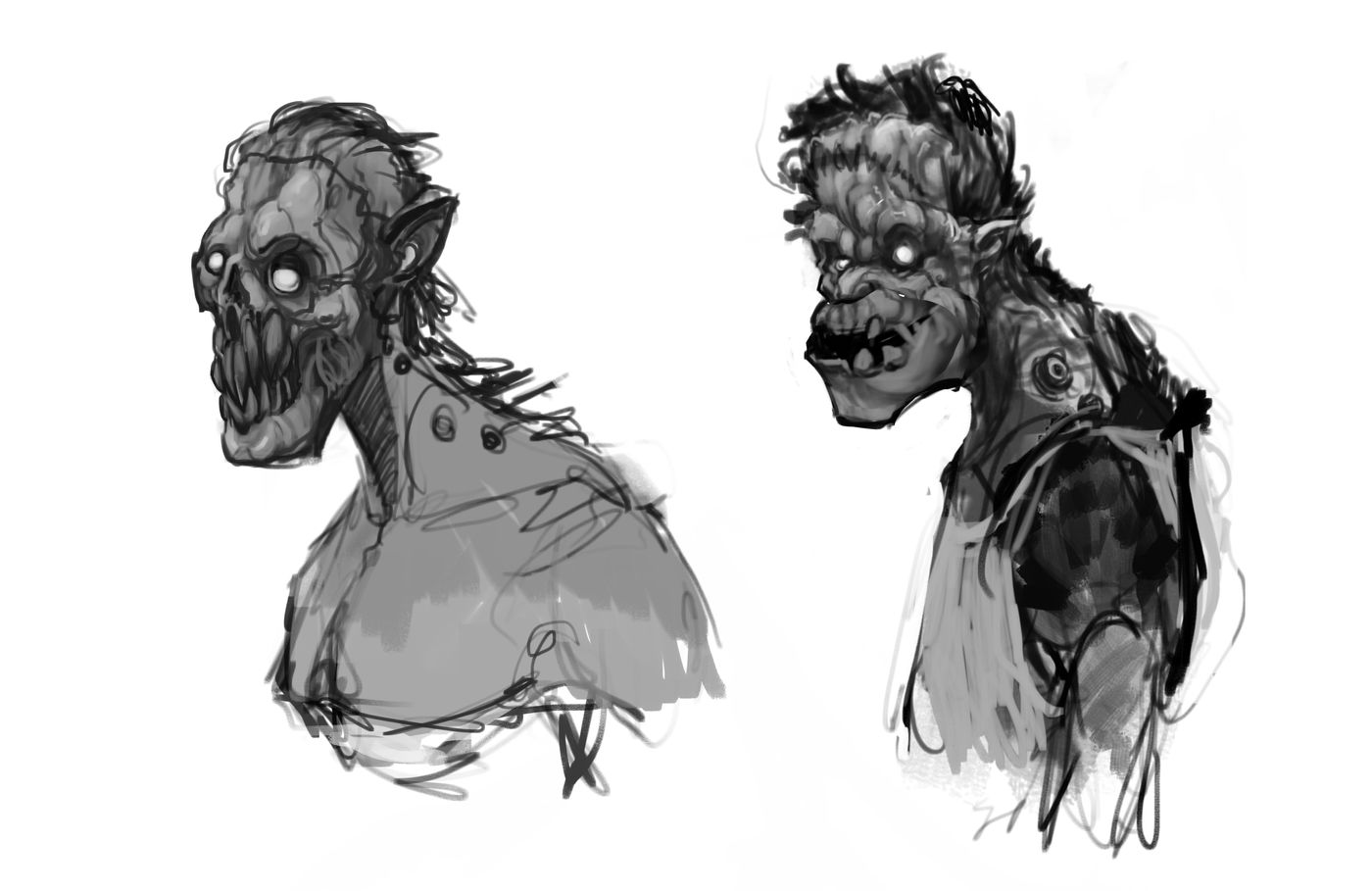 I refined the two concepts I liked most a bit more, adding some volume and details.

The left character is based on a turtle like creature and the right one was inspired by a chimpanzee. 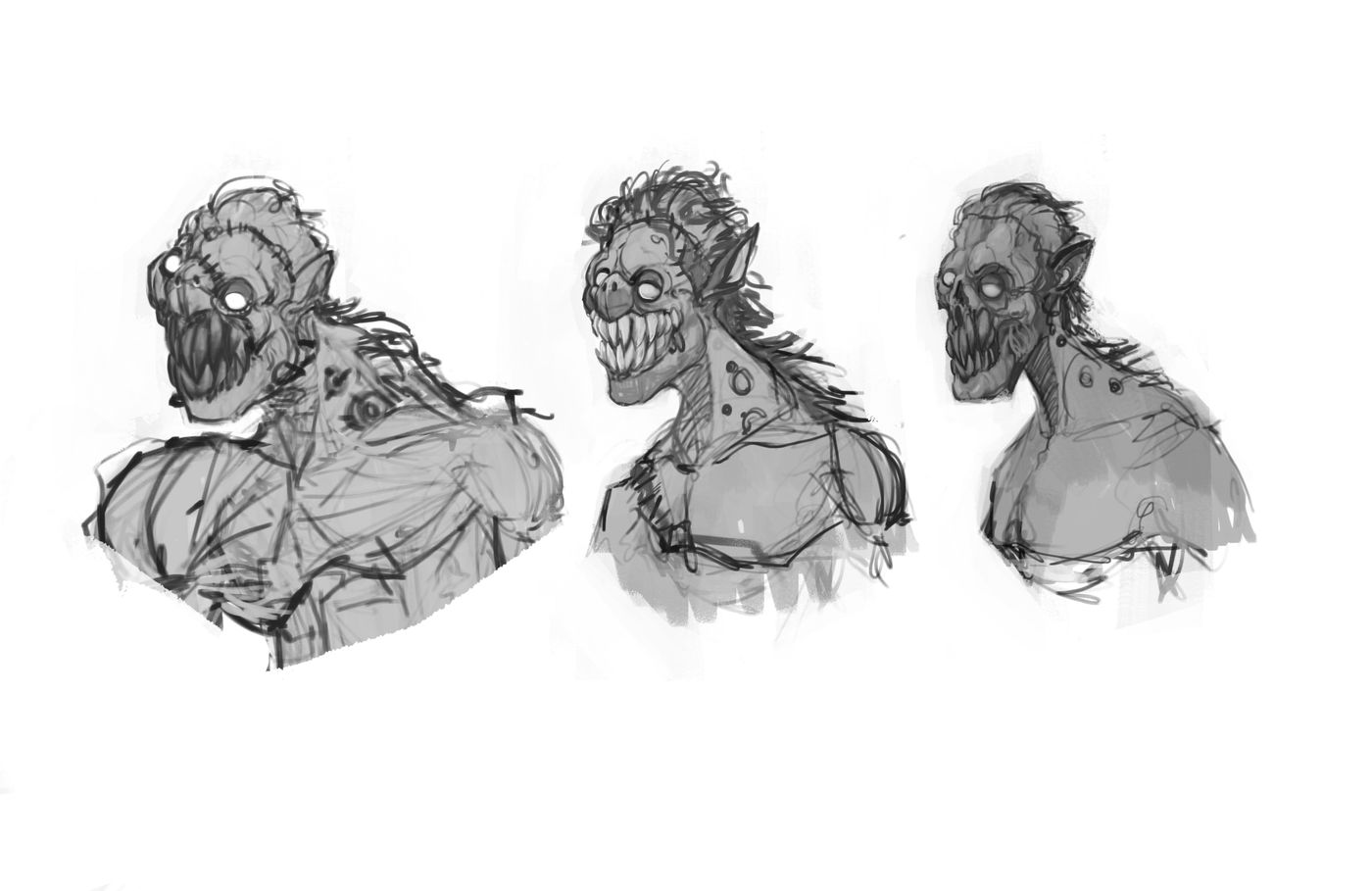 I somehow liked the expression of the left character design. Because of the lacking animal aspect I tried to figure out how much more monster/animal I could give him. I like the creepy attitude and I find the middle one to combine the best ratio of bulkieness/strength with the creepyness that comes inherent with the slim body and face.

The animals I merged to create a Frankenstein's monster are in these cases Turtle and Hyena. I find the Hyena gives it the aspect of strength and the turtle adds some weird skinstructure and some fun forms to play with in the face. 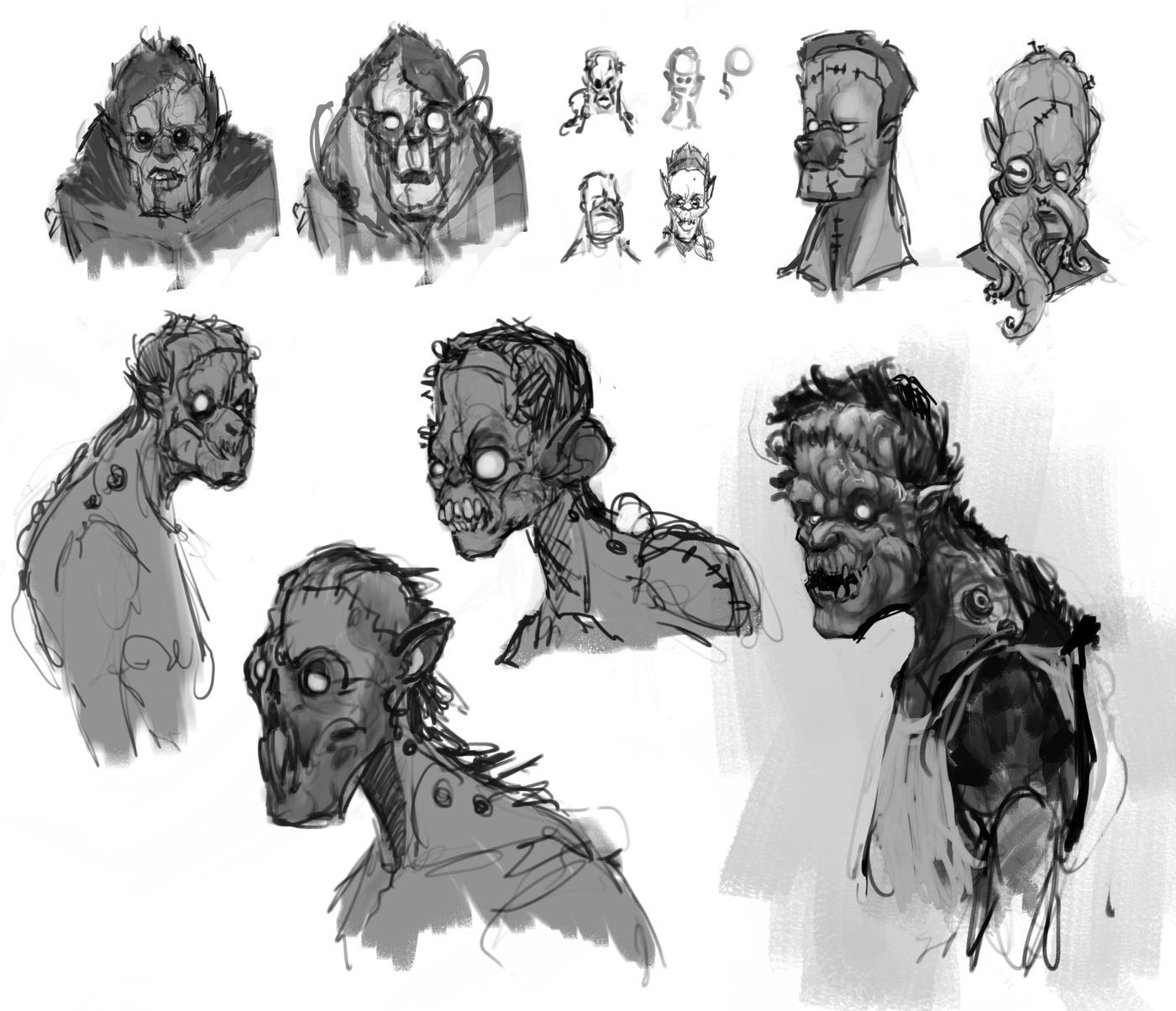 After the first step of figuring out the silhouette and basic bodyshape I like to zoom in a bit and carve out the general expression. I try to keep my mind open for new ideas and still try around alot. So for example I think a monkey or bear would work well with the Idea of a animal/Frankenstein combination. But I think it is worth at this stage to explore some other ideas as well, such as a octopus or sea/turtle Creature.

During this process I look at reference and the video material that has been made as reference. I try to stick to the feeling that has been created by Ace Ruele, because obviously his performance adds an important 1st impression of how the character should be.

I will start the character concept with some research, trying to understand what the director has in mind. Then I start to look up some visual research images in order to get a first impression of the possibilities that are given. In this case I think it would be nice to melt somehow the 'creepy expression' that is created by Ace Ruele with some animal body parts.

For me Frankensteins monster takes a lot of its creepyness by its asymmetric bodyshape. The motion capture example provided by Ace seems to be strong and impressive. I would try to involve this into my character design by keeping the body somewhat strong and muscular, but still heavy and big.

To support this I melt the humanoid body with some animal body parts as suggested by the director. The anmimal of choice should match those attributes mentioned above. So I think some ape like animal would fit well, as well as some other heavy animal like a bear.  Even at this early stage I try to capture the mood of the character, starting to sketch some quick thumbnails. I like to give my Monster some furry, muscular neck, a quite huge gorilla arm and some muscular gorilla attitude. He gets as well a Brownbear-foot, a barrel shaped trunk and some torn clothes. His other arm and leg remain humanoid. I will experiment with his face later on but I think it will be a combination of human and gorilla. 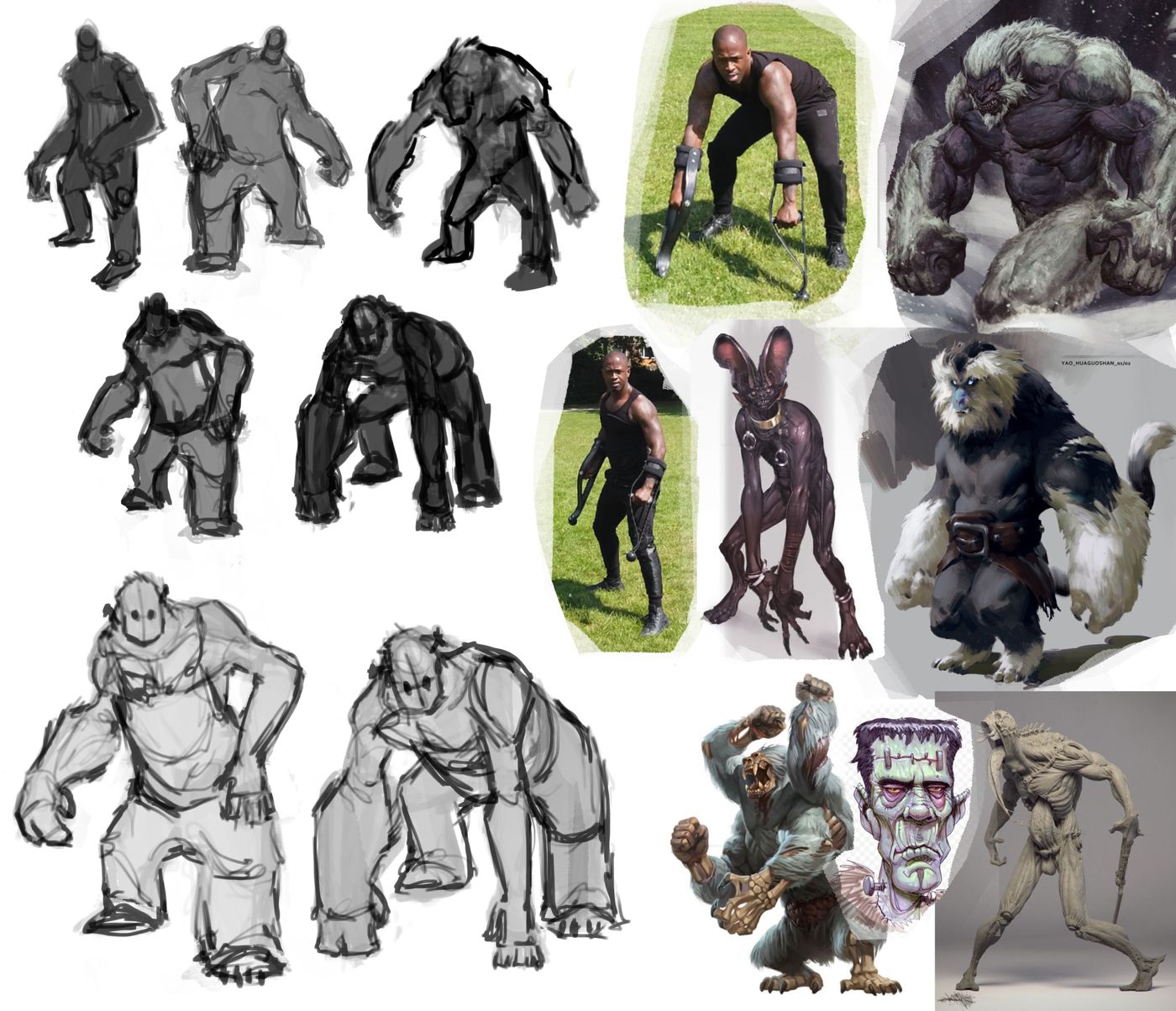 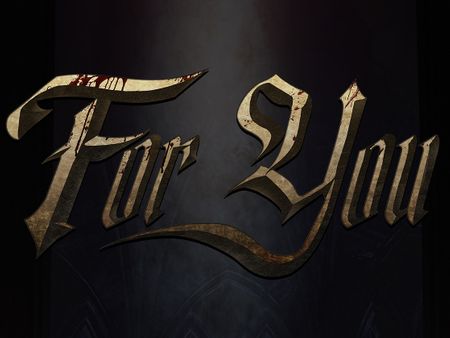 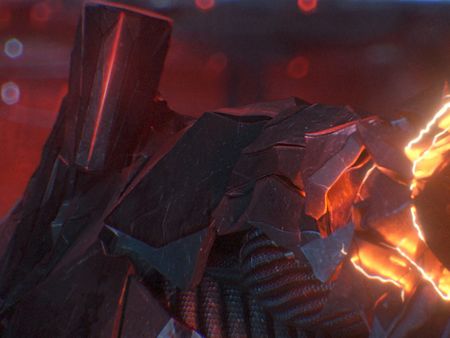 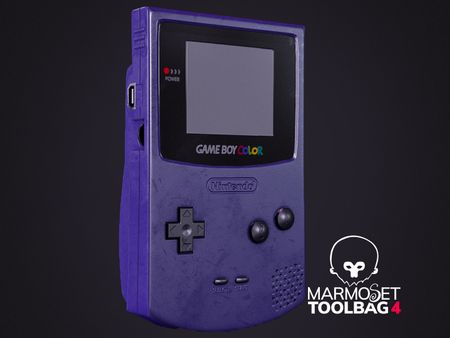