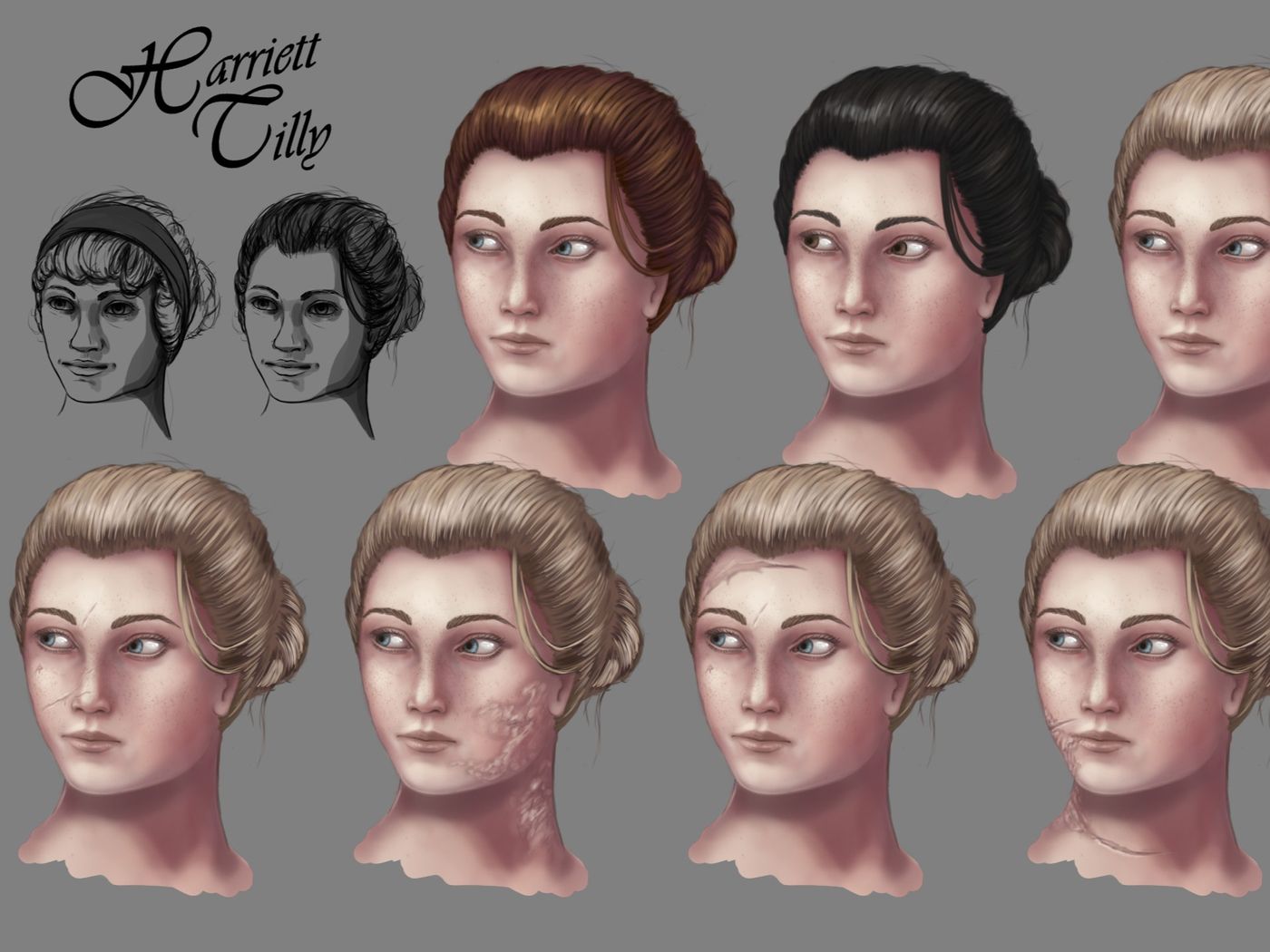 Female Officer Character Concept. An example of Birmingham's shift to equality and a display of strength in a country beaten down from The Great War. 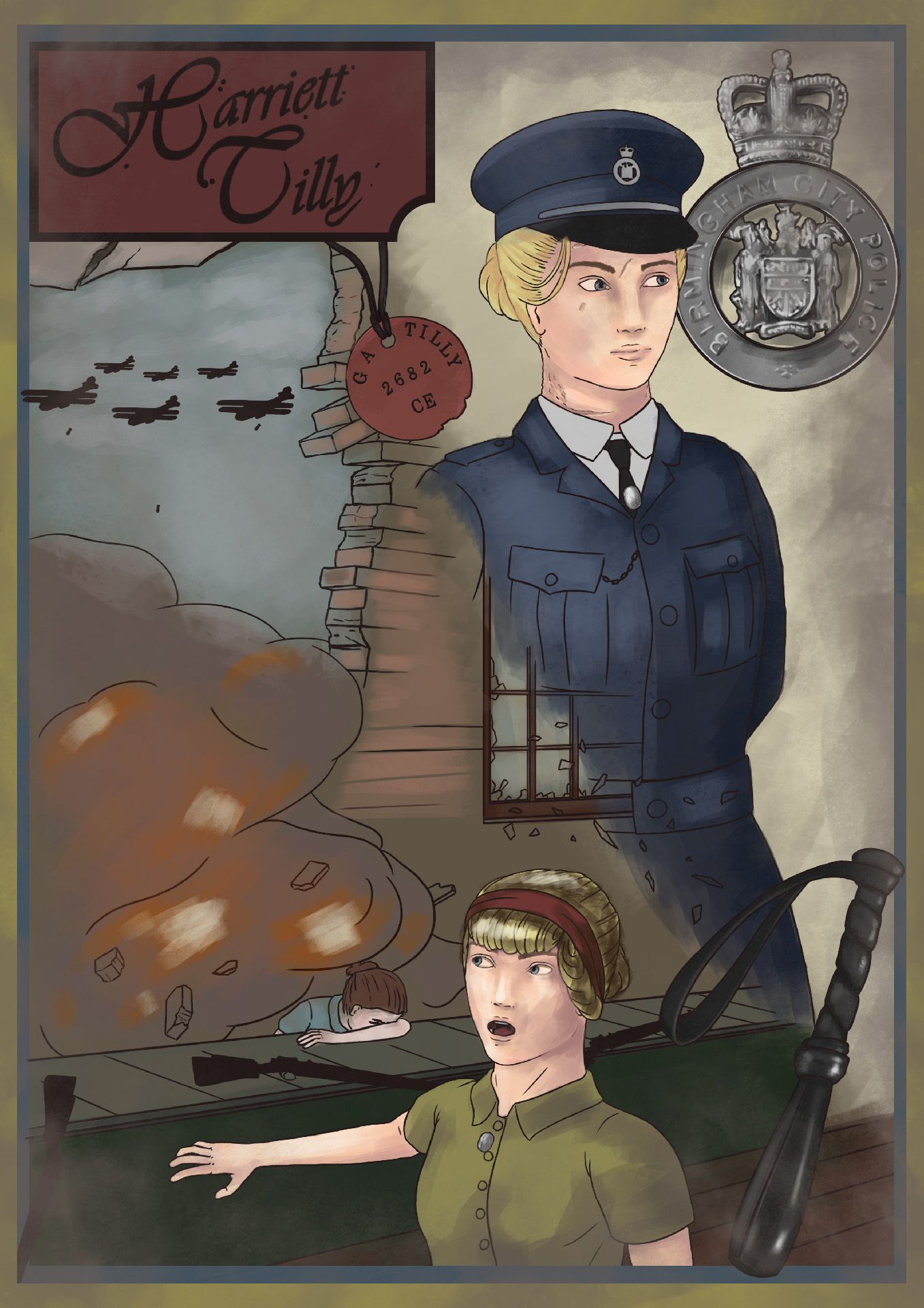 I have opted for designing a character for this brief as it is what I find most enjoyable.

To begin with, I started with some research into the Peaky Blinders gang, having not seen the TV show myself.
In my research I found the depictions of the gang from the show to be very exaggerated and have decided to go for a more historically accurate character design to truly represent Birmingham 1919 as requested by the brief. 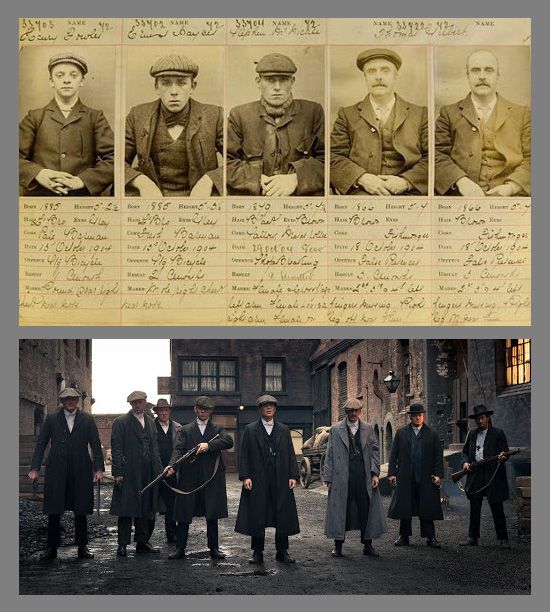 Here are some quotes I pulled, describing the actual gang as well as the stylings of their girlfriends from the time:

The Blinders:
The Peaky Blinders were a stylish bunch of chaps. They used their image to add a touch of class to their brutish ways, and to set them apart from other gangs, such as the Birmingham Boys. The way they dressed themselves was purposefully distinctive: peaked caps tilted slightly to one side, cravats, bell-bottom trousers, jackets with brass buttons down the front and steel-capped boots. They even wore silk scarves tied around their necks.

The girlfriends of the gang:
Philip Gooderson, author of The Gangs of Birmingham, wrote that girlfriends of gang members also had a distinctive style: ‘lavish display of pearls, the well-developed fringe obscuring the whole of the forehead and descending nearly to the eyes, and the characteristic gaudy-coloured silk handkerchief covering her throat.’

Gathering up some reference images, I found the show to be particularly useful for a styling reference, being the most prominent piece of media of this particular time. I gathered a few images of gang members and females from the show as I felt myself wanting to create character which would react well with the peaky blinders without directly creating another gang member. 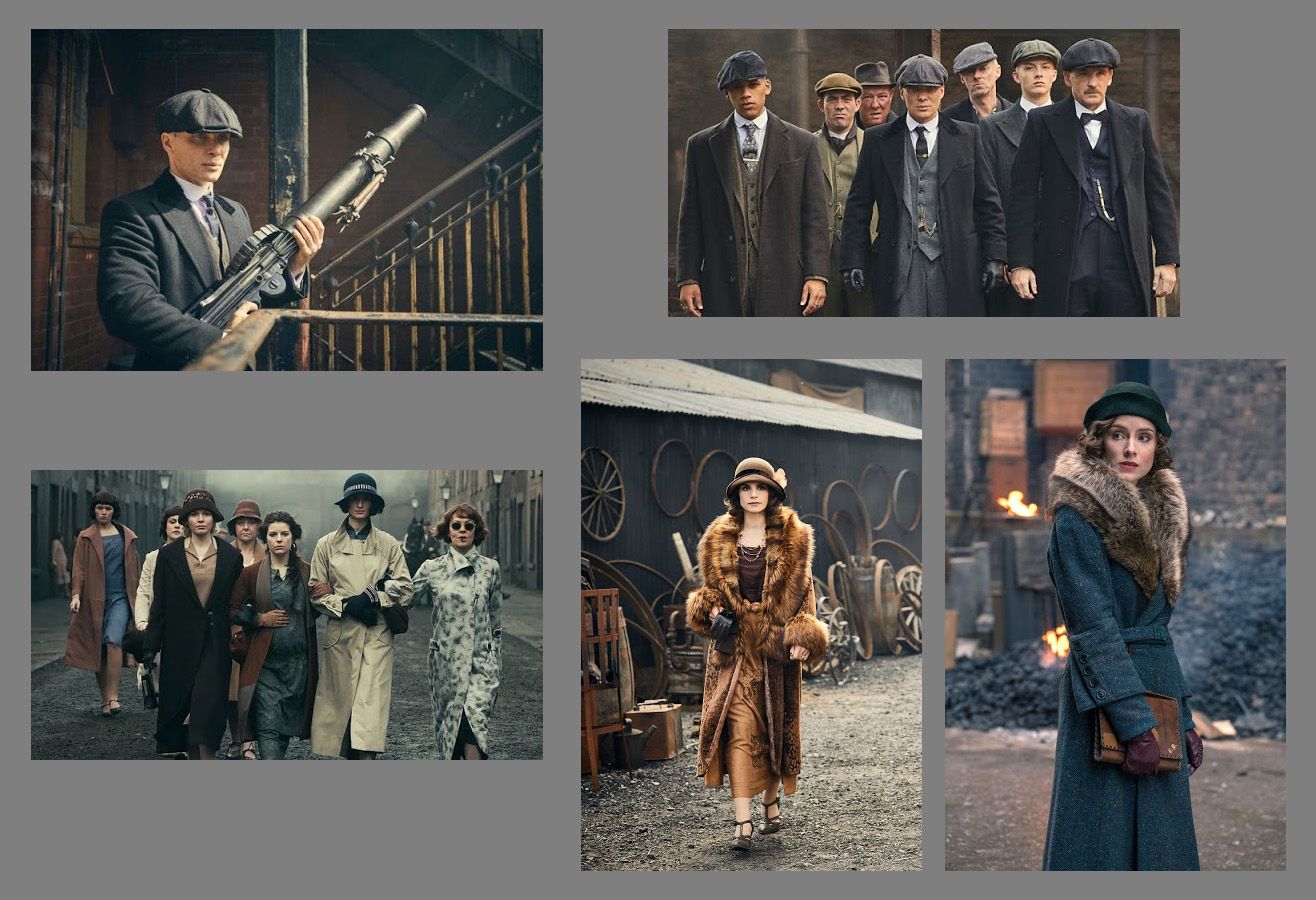 During my search for references of women in Birmingham during 1919, I stumbled across the first picture of Birmingham Police’s Women’s Department, believed to have been taken in 1919. 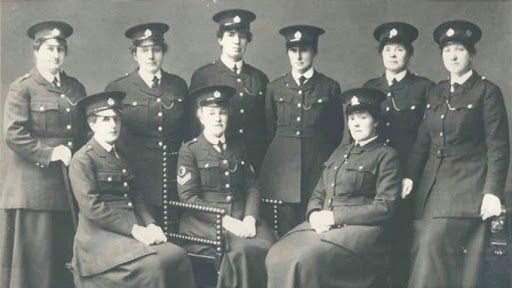 Further reading into the article found that female officers were first recruited into the West Midlands police service in 1917 during the First World War.
This very much interested me as a law enforcement character would be an opposing force to the gangs of Birmingham and furthermore, a female officer would represent a point of historical importance for Birmingham as a big step towards equality.

Moving on from the Peaky Blinders, I gathered a couple images of law enforcement from the time. 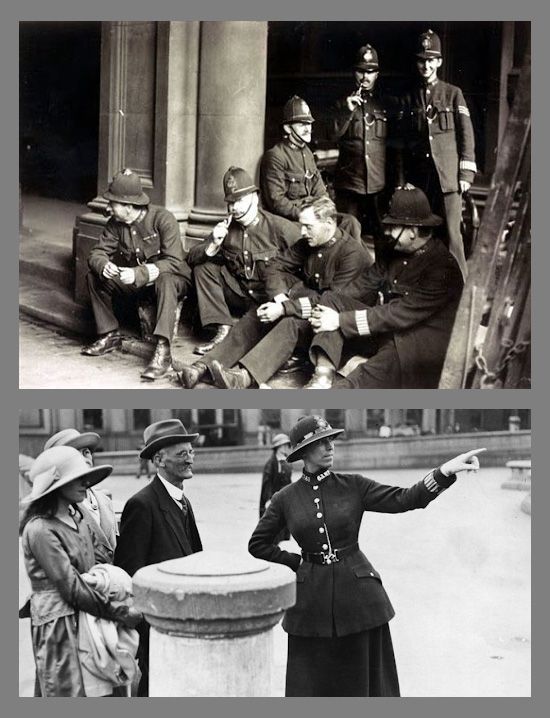 I have opted for an accurate female officer as it will offer a good representation of Birmingham’s history and allows for an interesting character, facing the challenges of being subversive in a society which would not be so accepting of such an independent woman who has expectations to exceed, to show that her gender is more capable than perceived in this time period.

I have written up some possible personality descriptions for the character:

*Dark mysterious lady. Femme-fatale with a stern attitude and a calm voice. Uses her female charm to her advantage. Confident when handling men despite knowing her place in the social hierarchy of the time.
*Fresh detective; the first female. Grateful for her opportunity and is overly eager to impress. Has a straight sense of justice and high morals. Is understanding and careful.

*Detective by day, gang member’s girl by night. Devilishly clever and deceiving, using her newly granted place in the police to deliver information to the gang where her loyalty lies. Has the distinctive styling of the girlfriends; her fringe swept up under her police cap and her silk scarf tucked into her collar.
*Masculine woman constantly comparing herself to her male counterparts who she is eager to compete with. Has the need to prove her toughness and is eager to scrap with a Peaky Blinder.
*Former forewoman of a munitions factory during the war. Now widow of a well respected officer killed early in the war, resulting in her joining the police force before the war came to an end to fulfil her desire to defend her country as best a patriotic woman could. Still facing sexism and lack of respect from some of her peers, she remains steadfast. https://www.birminghammail.co.uk/news/midlands-news/birminghams-past-factories-14638530

While designing the character, I noted down some possible props to add something unique to the characters kit; some kind of item which they are known to always have on them:
*Blackjack (baton)
https://en.wikipedia.org/wiki/Baton_(law_enforcement)
Small concealable defensive weapon. Good for subduing criminals. Has a whip like effect due to the spring of the handle making it very effective.

*Cigarette holder
https://en.wikipedia.org/wiki/Cigarette_holder
An essential part of ladies’ fashion from the early 1910’s to the mid 1970’s.

*Weapons from The Great War. Trench knife, bayonet, revolver, Lancaster pistol, cavalry sword. Possibly having belonged to their husband who died in the war.
Despite an old service revolver or a Lancaster pistol from the war being a very cool prop for a character, police officers did not carry fire-arms on patrol. The idea of remnants from the war belonging to a fallen loved one does interest me as part of the characters design to give them a deeper backstory. Possibly a medal or scarf of a husband or brother. 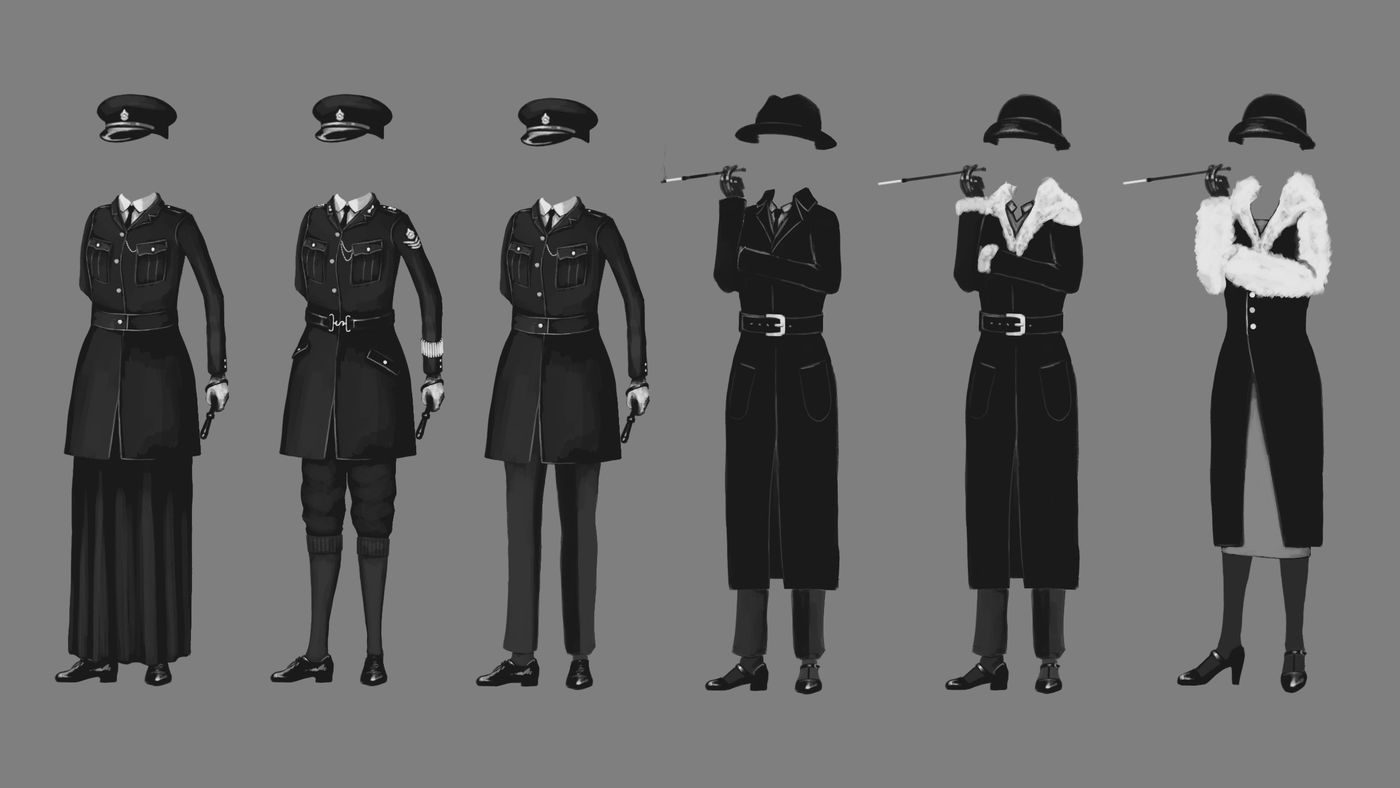 I painted a few variations of officer uniforms, one historically accurate and the others less so to the time. I also painted a few outfits which resembles more of a detective character but quickly decided against them.

Before starting on designing the character’s head, I gathered some references of hairstyles from the time. 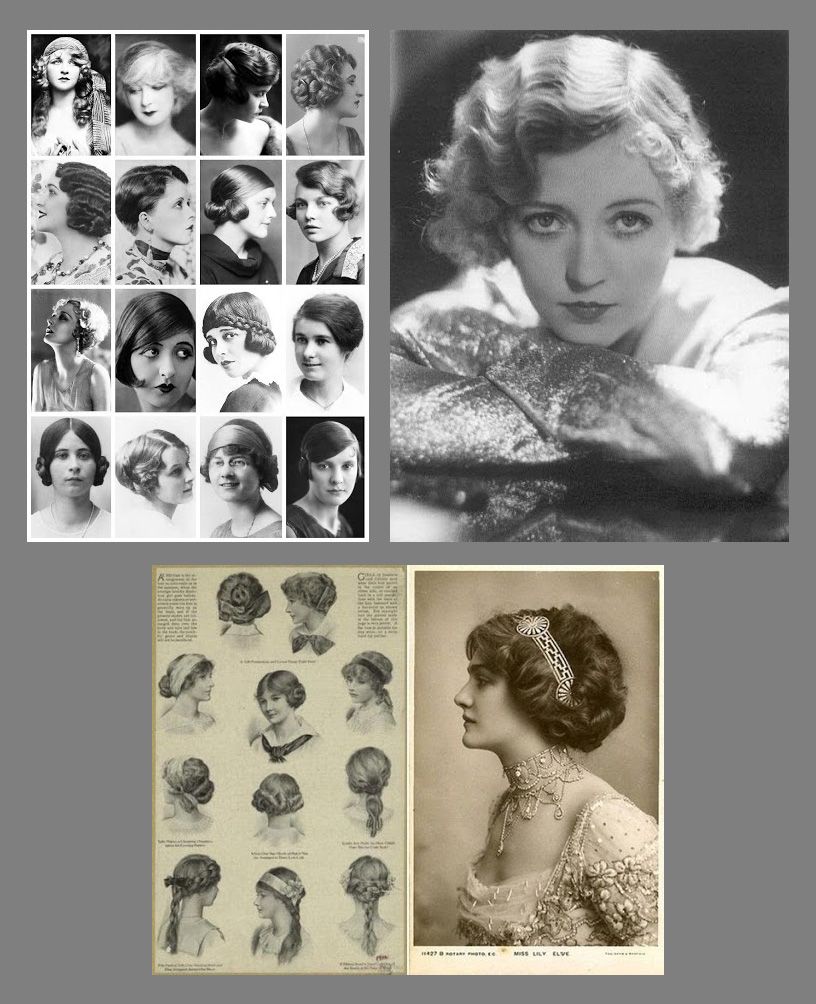 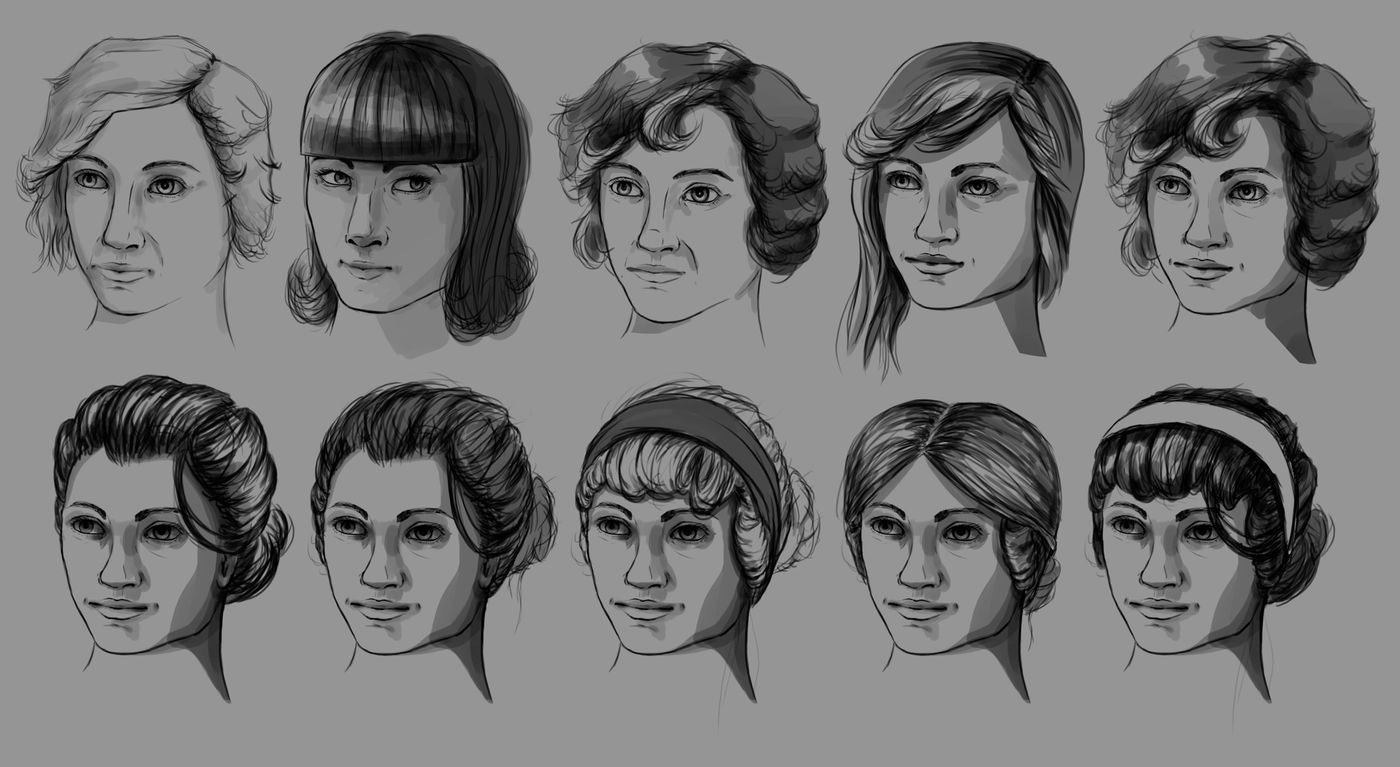 I took 2 of the head concepts with the idea of creating a before and after image of the character to tell the story of her working in the factories before joining the police force. 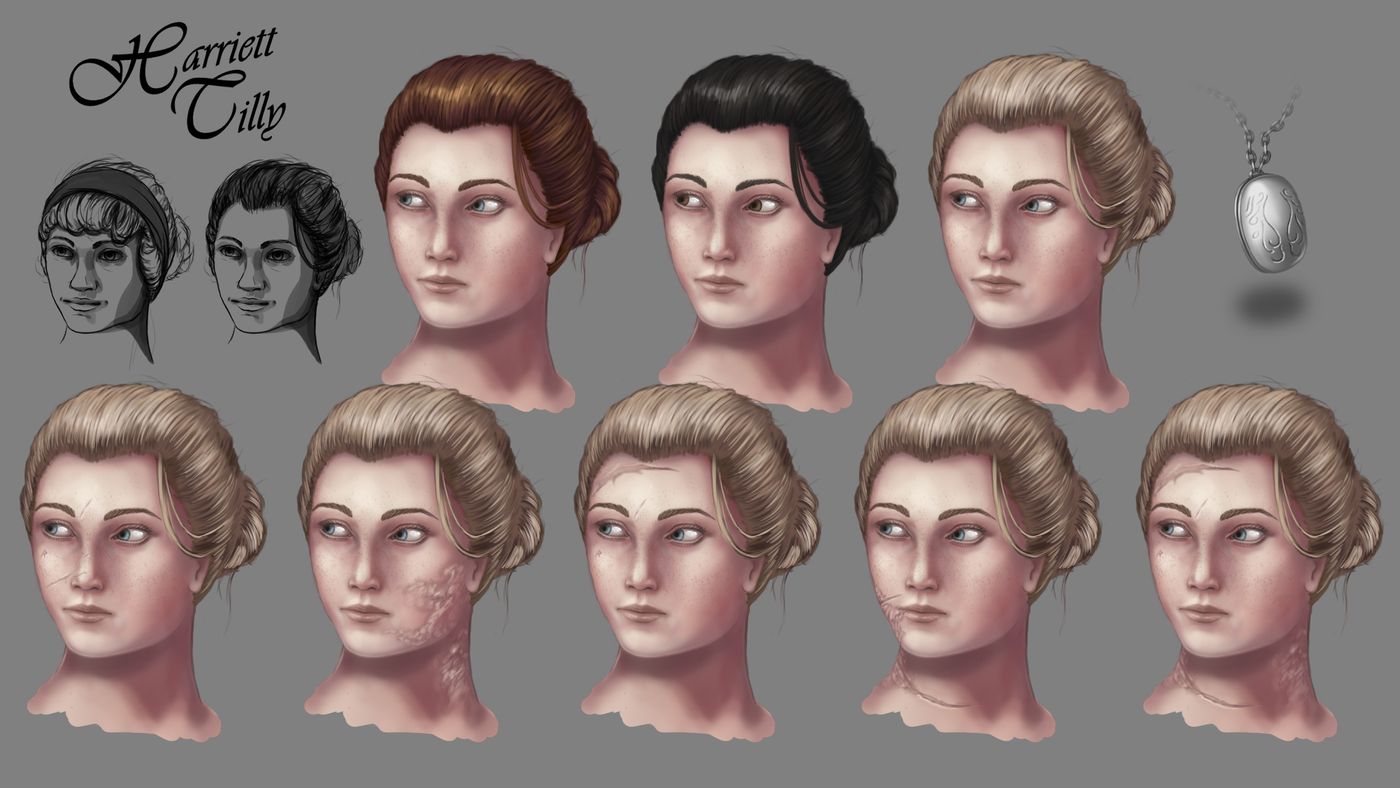 After painting up the face and picking a hair colour, I began to create variations of her face with wounds which she received working in a factory after it got bombed by enemy aircrafts.
I like the final head concept which shows burns sustained to the back of her neck when turning away from an explosion. She also has scars on her neck where she was narrowly scraped by flying shrapnel as well as a large scar and small cuts on her forehead where she was thrown forwards. These injuries are placed onto her head so that her collar and hat will mostly cover them only allowing small glimpses at her injuries. This character will appear tough, hiding her physical injuries as well as emotional injuries from losing her husband on the front lines and friends in the factory bombings where she too suffered.
I used the extra space to quickly paint a simple locket for the character where she will keep a picture of a loved one, lost in the war.

I got the name Harriett Tilly by searching a list of popular first names from the 1890’s for an appropriate time period name for a young adult aged between 20 and 29 in 1919.
https://www.ssa.gov/oact/babynames/decades/names1890s.html
When I found a name I thought suited the character, I googled the meaning of the name to give her a name which is relevant to her character.

Name:
Harriett (Meaning “rules the home,” the “home” in this case being Britain and her “rule” over it is her authority as an officer) https://www.sheknows.com/baby-names/name/harriet/

Tilly (From Matilda meaning “strength in battle,” to represent her as a strong woman and force against criminals and gangs) https://www.sheknows.com/baby-names/name/tilly/

To further complete the development of the character, I made a sheet of my chosen outfit and props which will make up the character. 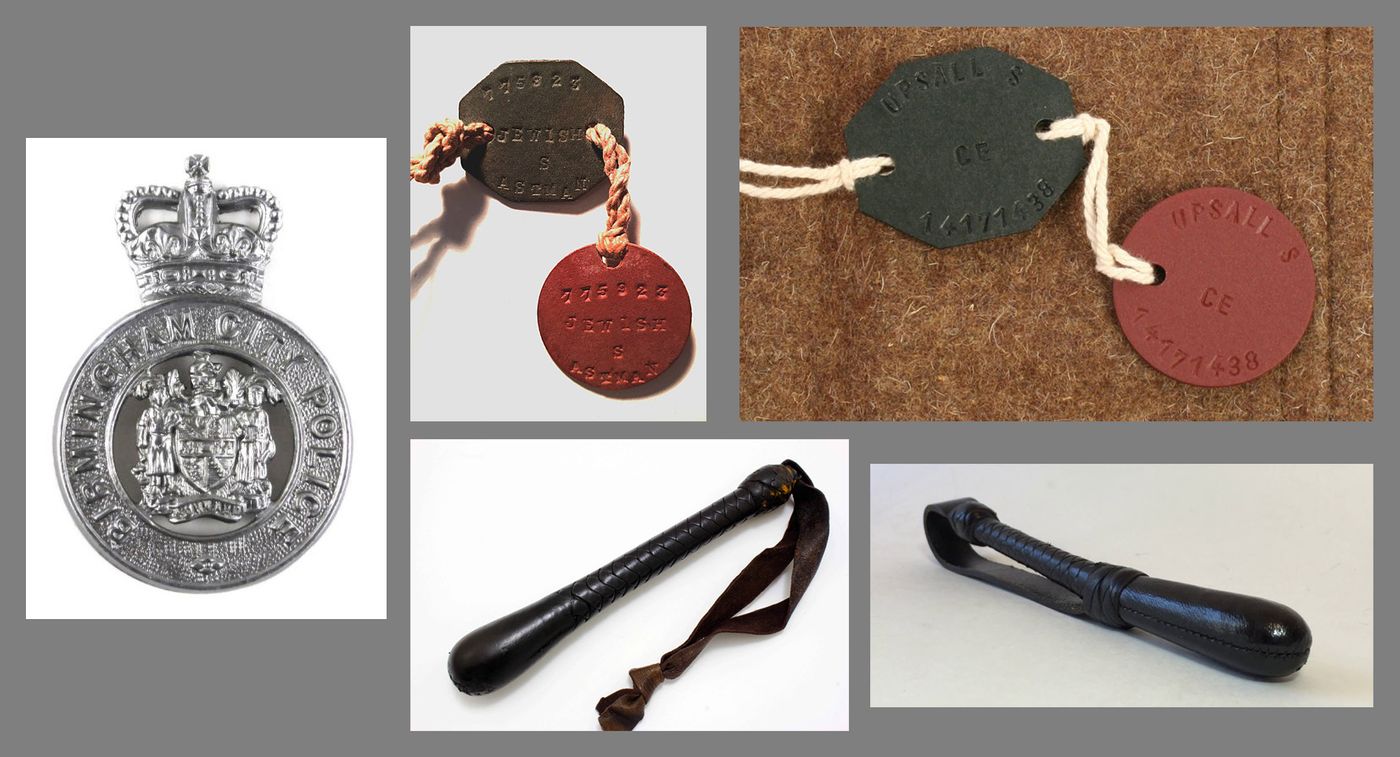 Before the West Midlands Police, Birmingham was policed by Birmingham City Police until 1974. The oldest police badge of Birmingham City Police I could find (similar to the badges in the photo of female officers) was a post 1953 badge found on an online shop which I will be using for my reference: https://www.badgesoftheworld.com/birmingham-city-police-chrome-2?search=birmingham%20police

In World War I, British soldiers wore 2 “identity discs”, (dog tags) one green and one red; the red tag would be cut from the soldier’s necklace to record their death whilst the other would be left on the body for further identification. As a memento of her lost brother, I will have the character carry around the identification disk of her brother in her pocket. It is threaded with an old shoelace for it to be worn around her neck when she is in need of strength. 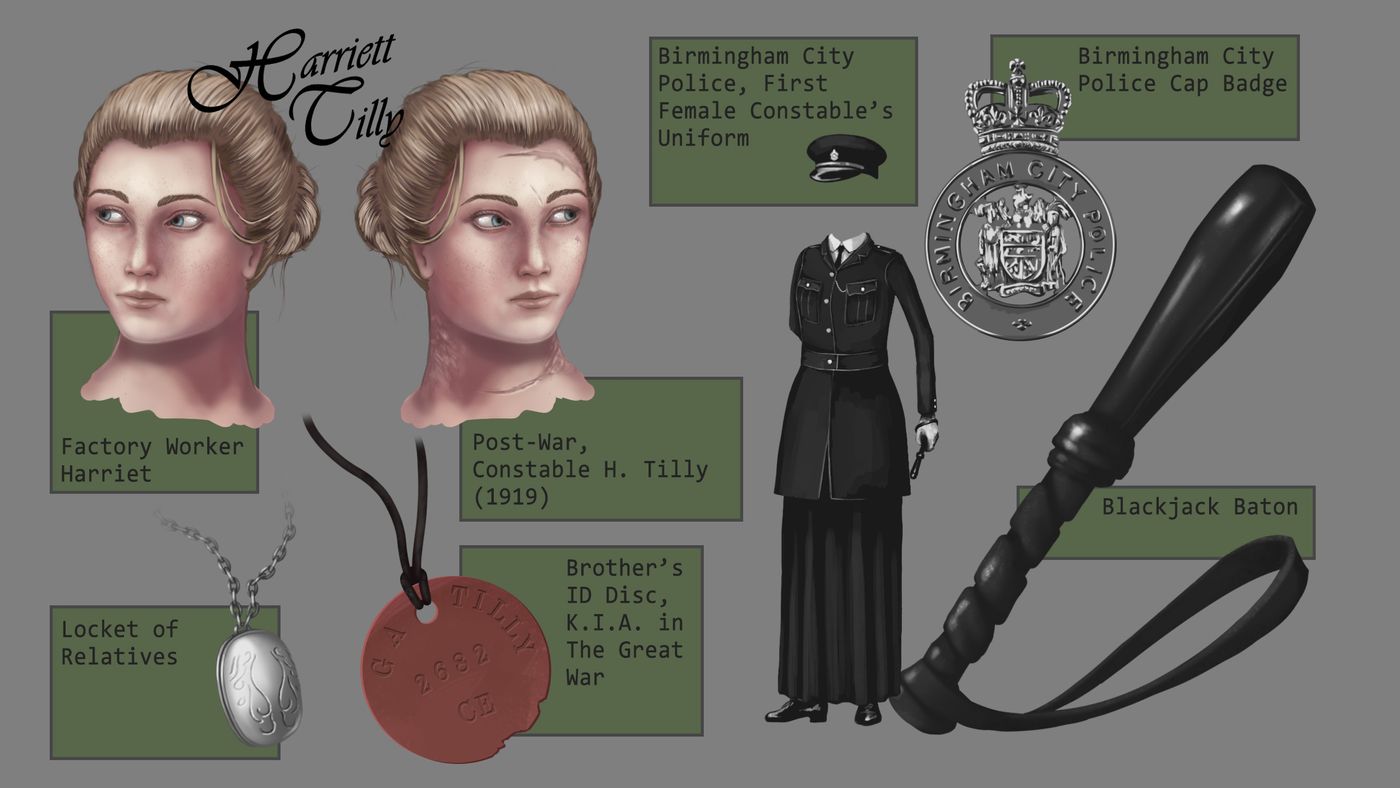 Before moving onto the final painting, I decided to create a few quick composition thumbnails to see how to best display the character along with hints as to who she is in one piece.

I’m fond of a composition which shows 2 images of the character; a contrast of her past working in the factories to who she has become as one of the first female constables in the West Midlands police force, baring scars from her past.

I have gathered a few references of British propaganda posters from World War 1 as I want the styling of the final piece to be reminiscent of the era. 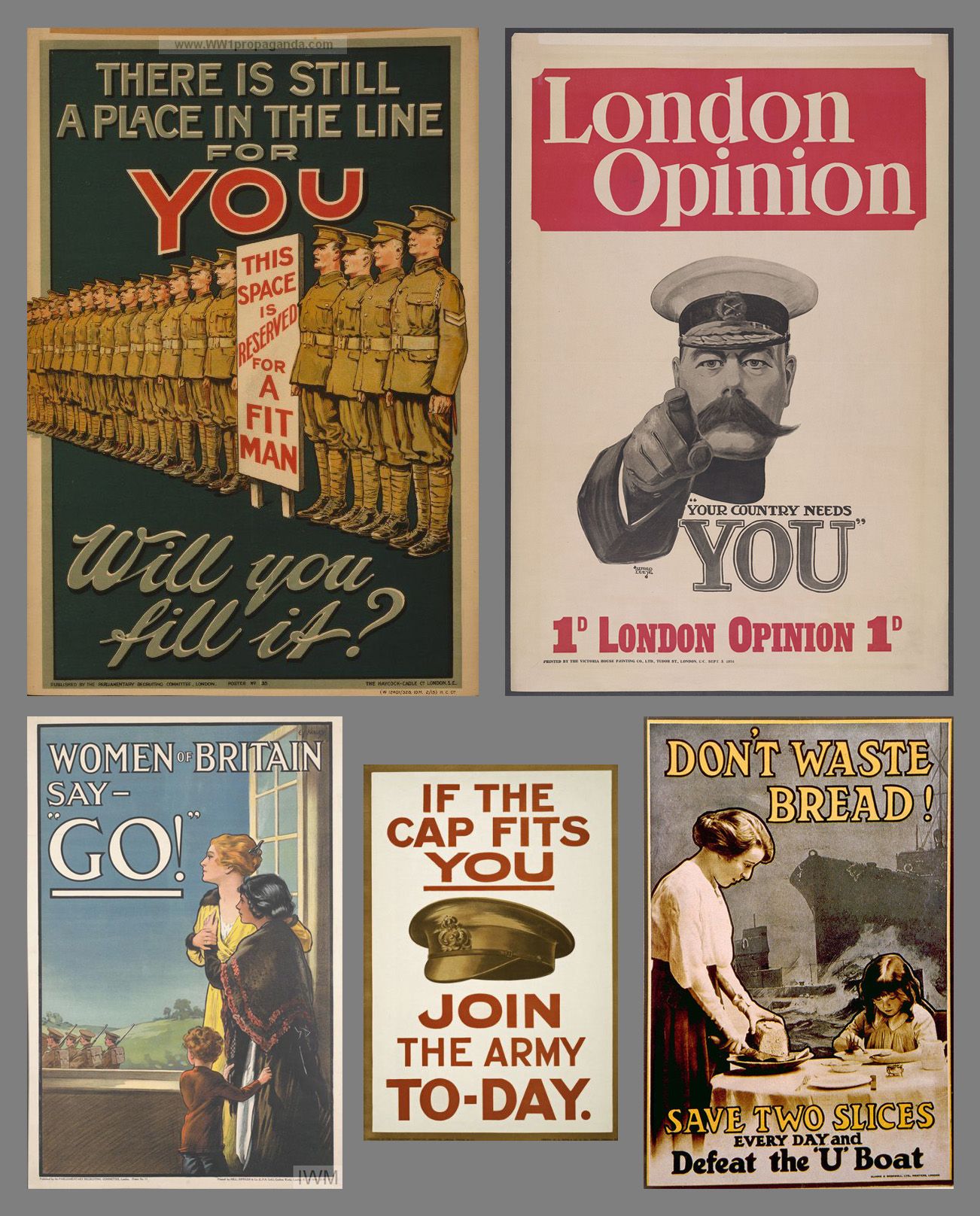