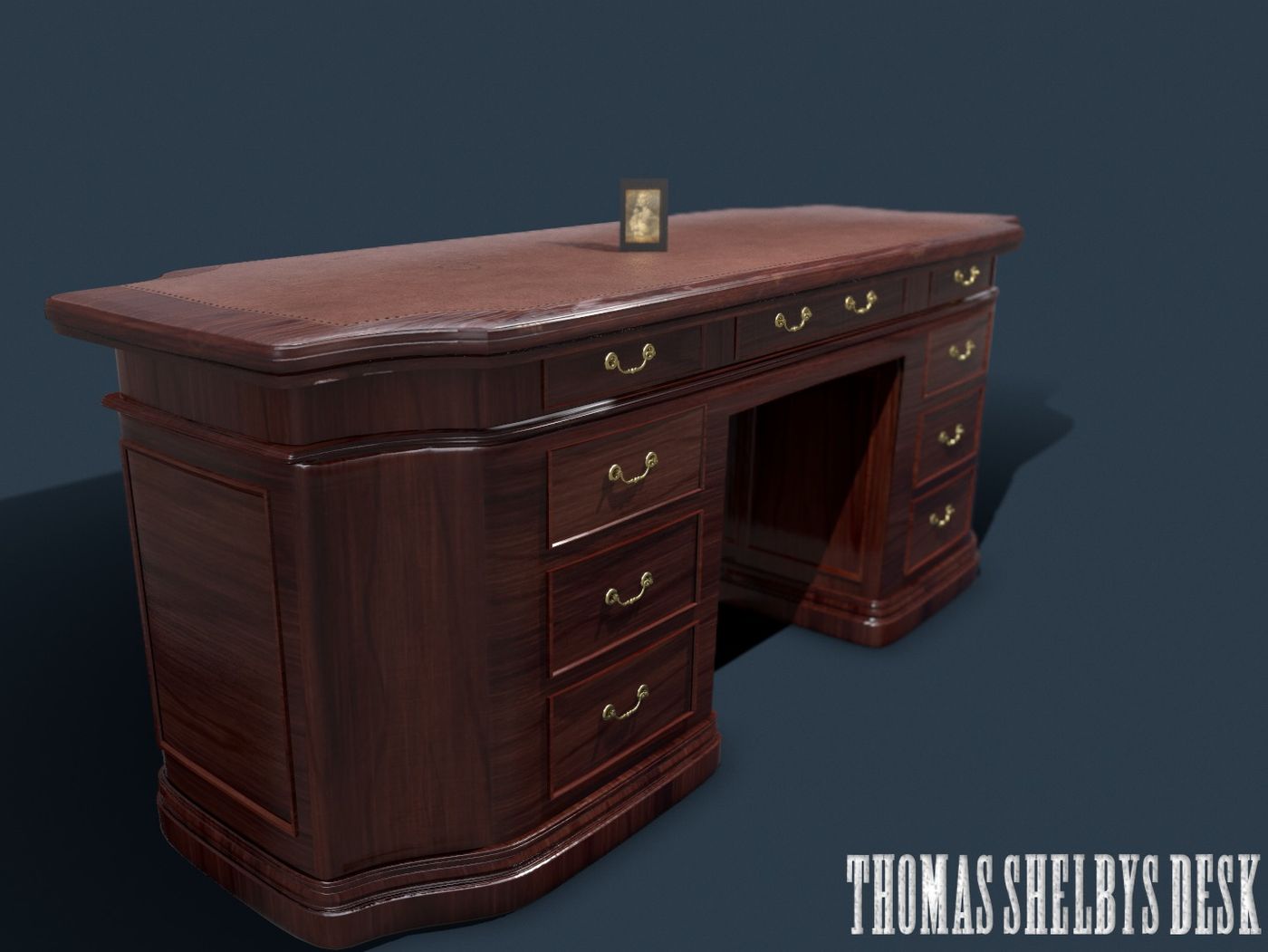 by dommulgrew on 6 Dec 2019 for Netflix & Skill - Peaky Blinders

Overall, I am happy with how my desk turned out and am grateful for an opportunity to take part in the contest. There are definitely areas for improvement but I have learnt a lot throughout this project and will make me a better artists in the long run. 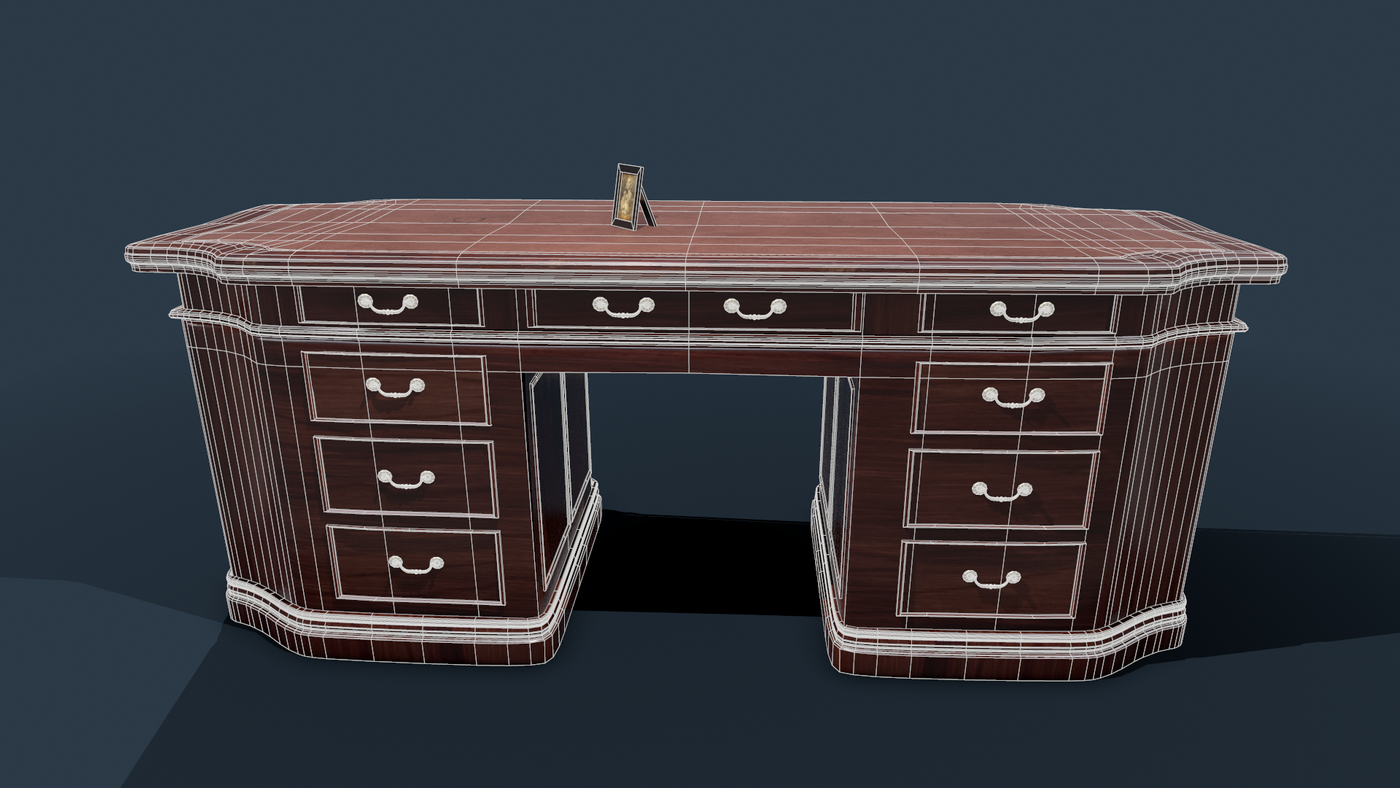 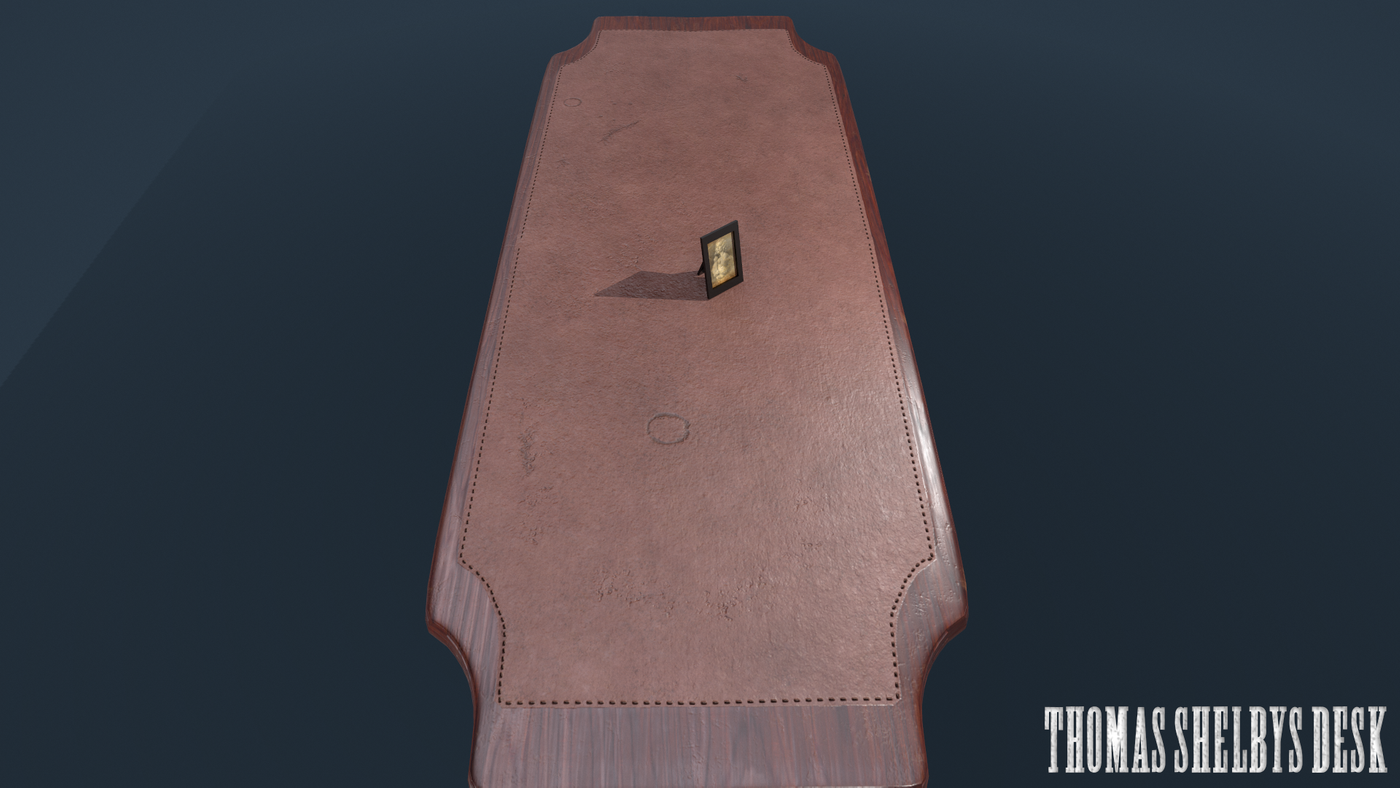 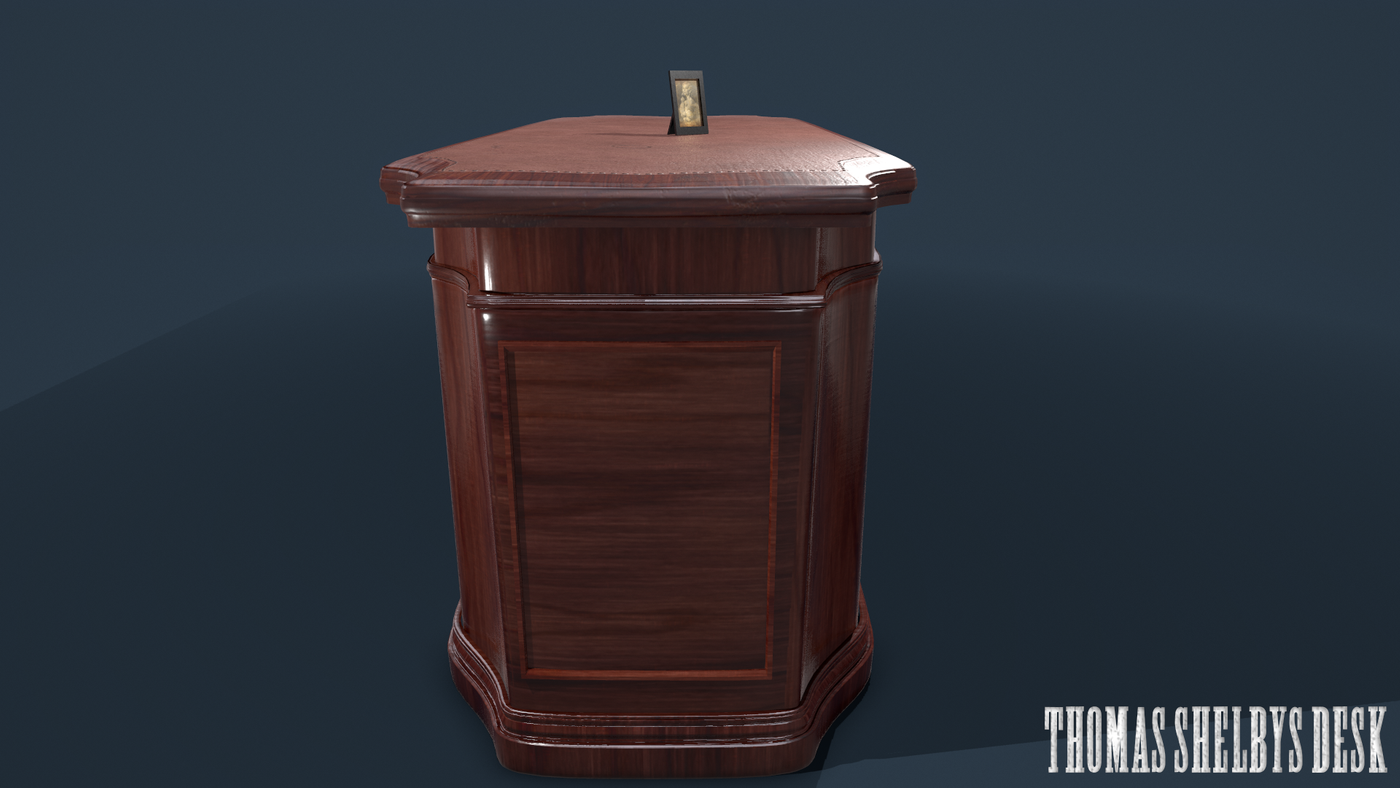 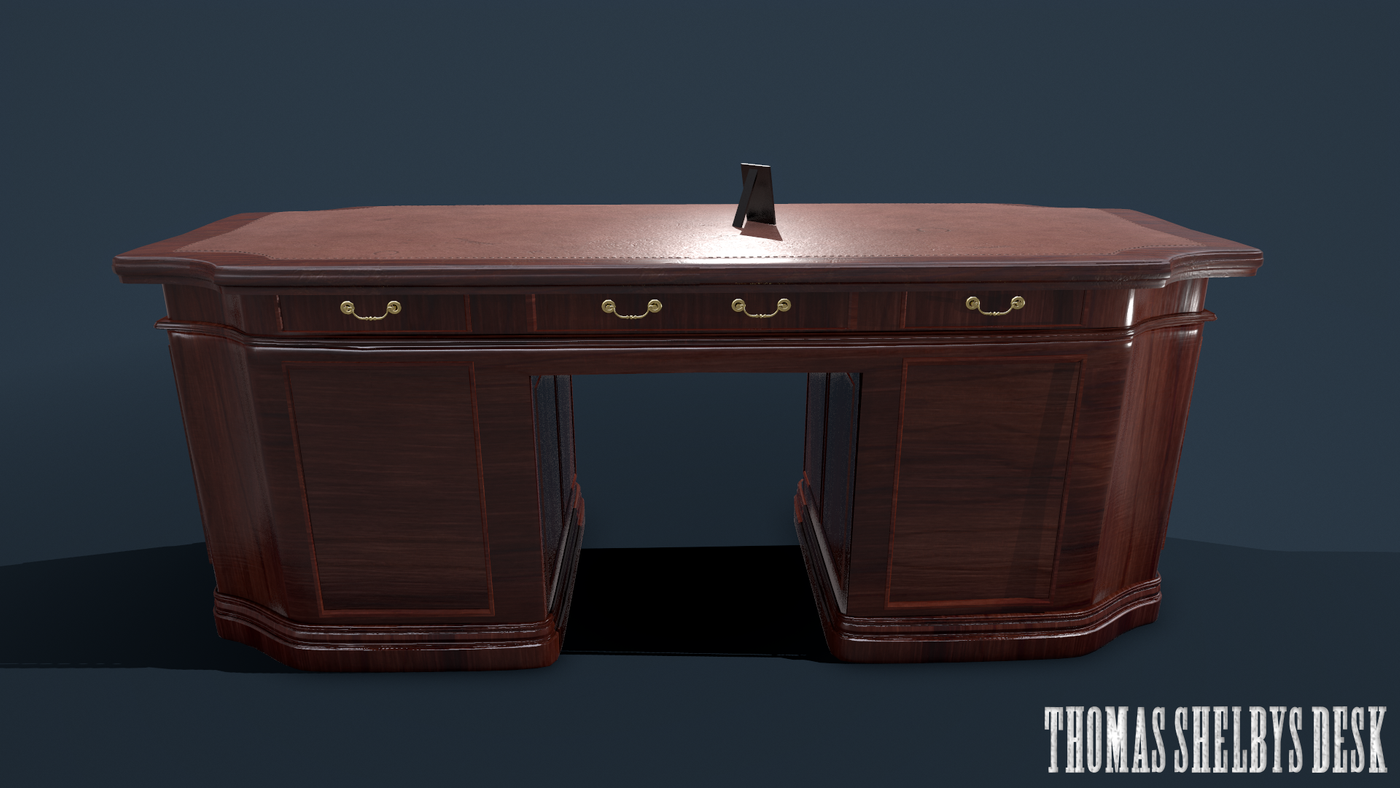 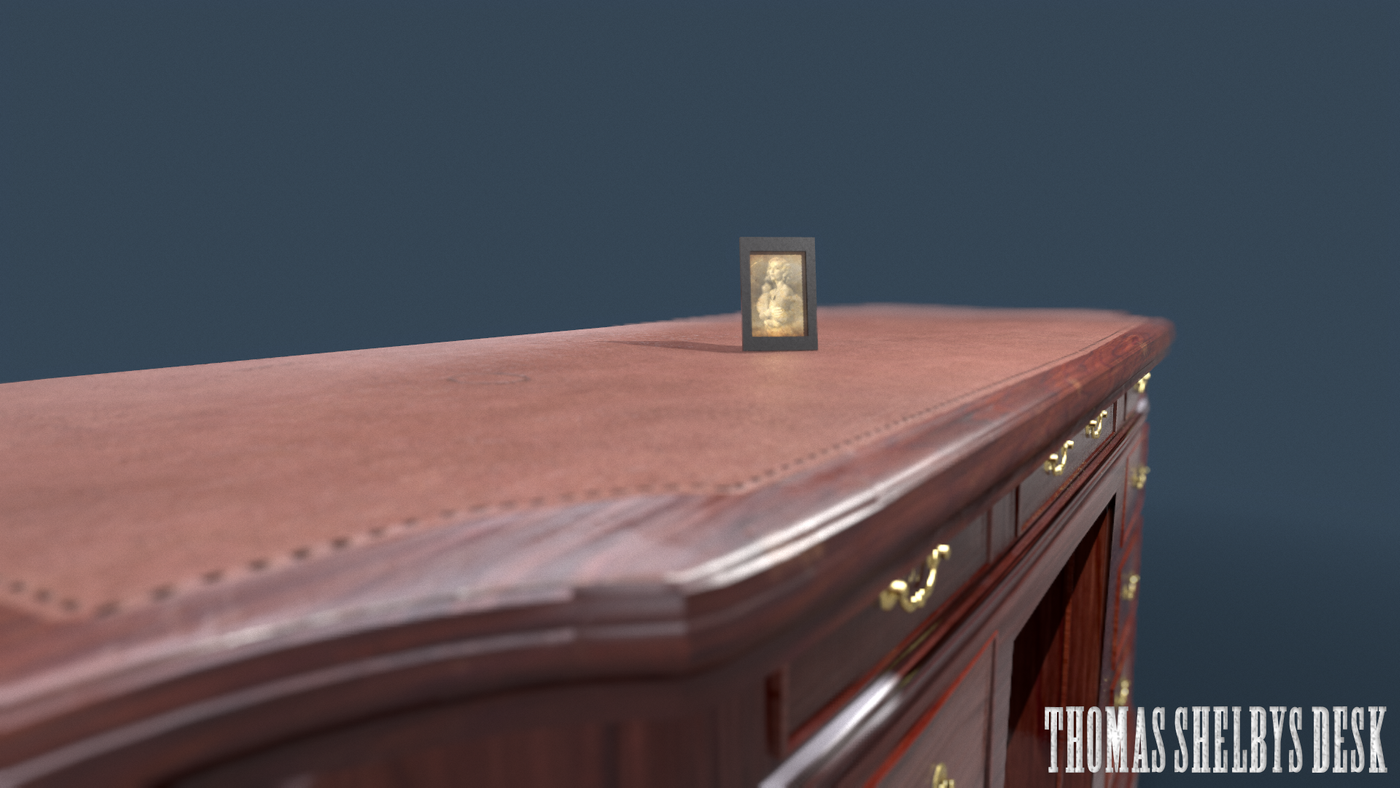 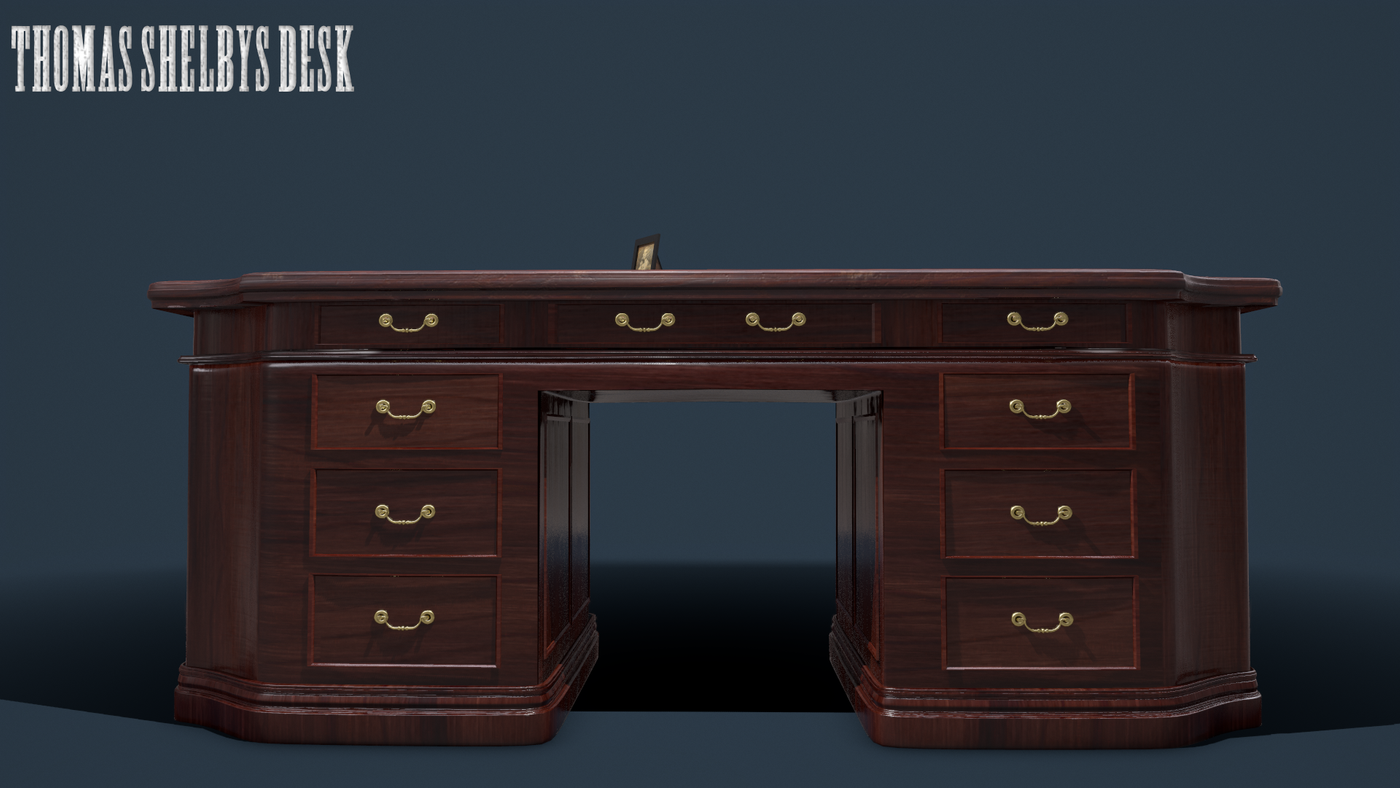 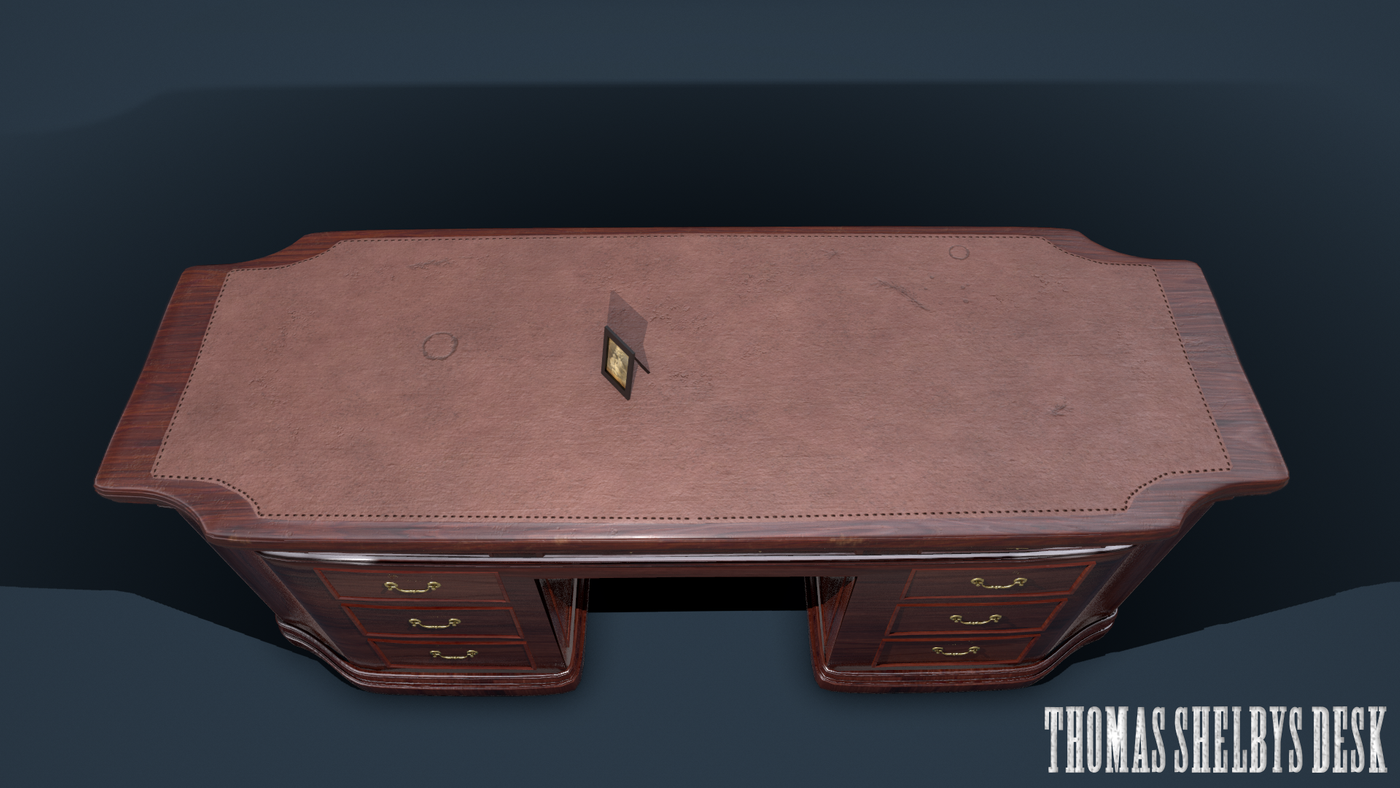 Then I got my model and textures back into Marmoset to create the final renders (I also added a tiny photoframe with a photo of Grace in it just to have something of top of the table) image source: https://peaky-blinders.fandom.com/wiki/Grace_Shelby.

After a lot of experimentation I finally produced a result that I was happy with. 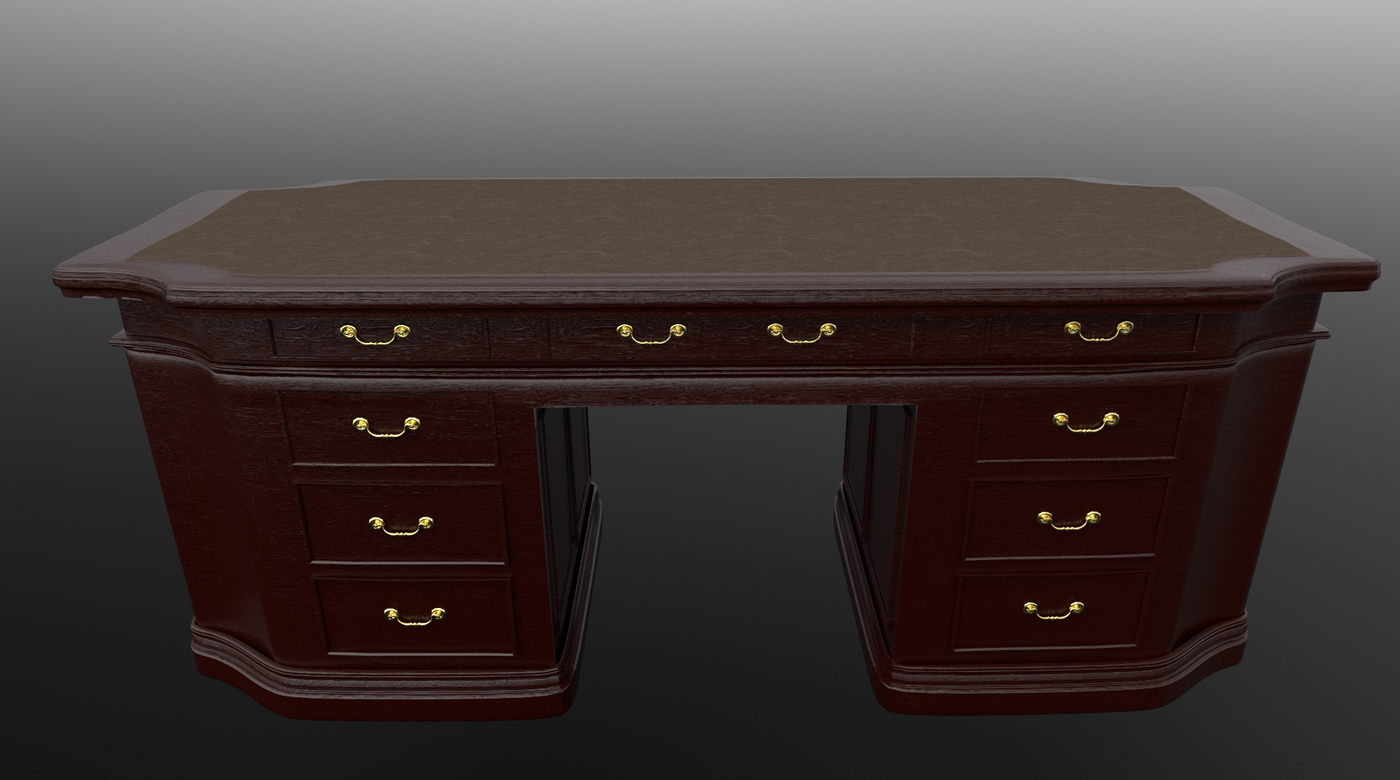 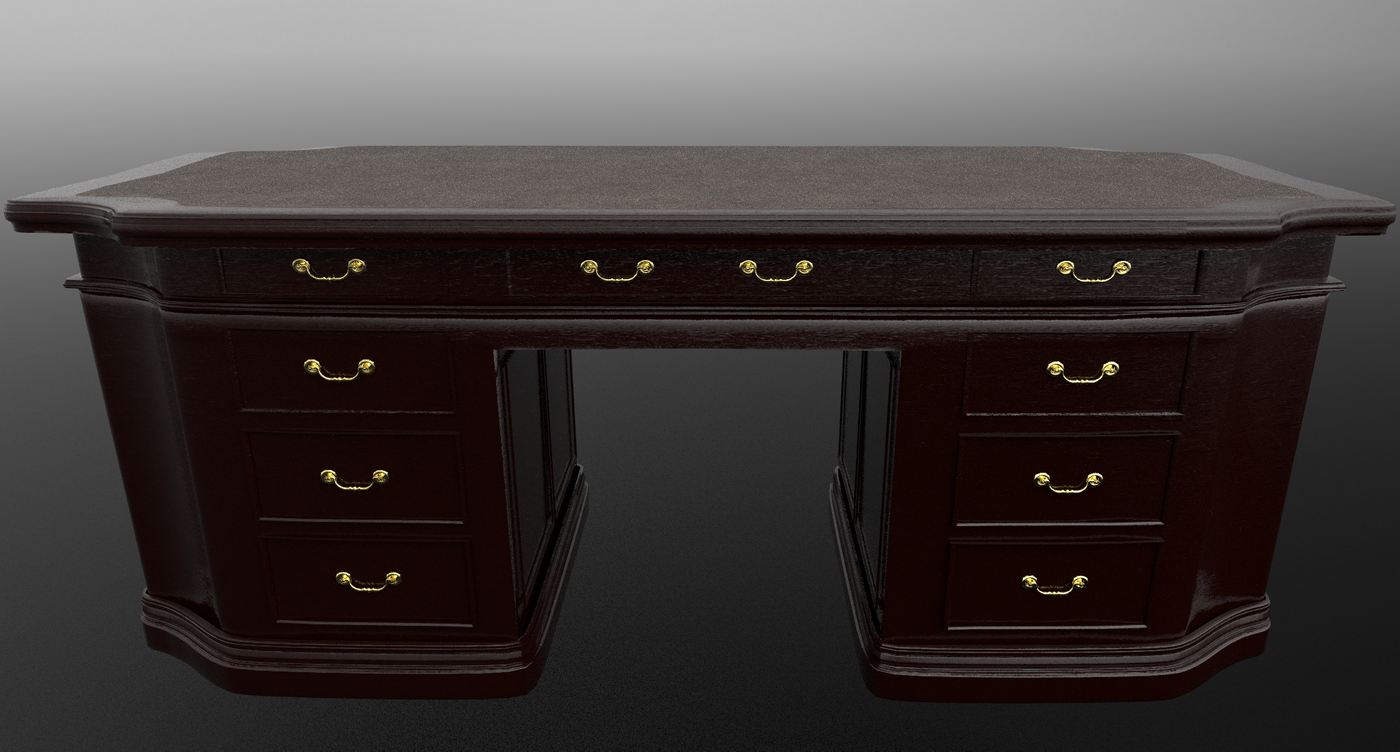 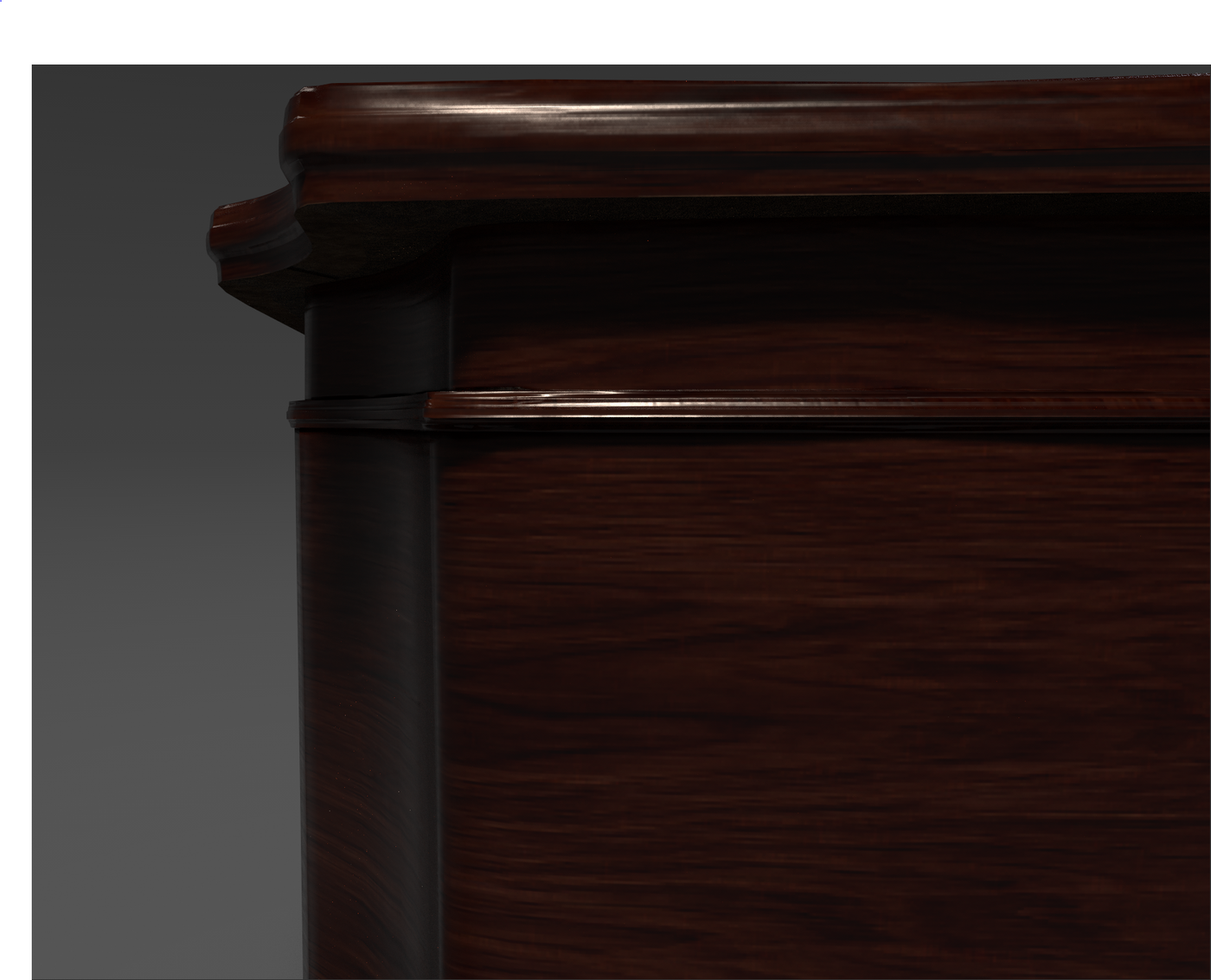 I did quite a lot of colour and material experimentation on the desk as I couldn't seem to produce a result that I was happy with.  (All above renders done in Substance Painter's built in renderer.)

After UVing I exported each part for texture baking, which was done in Marmoset,  I hadn't baked in Marmoset before so I had to learn a new skill, at first it was tough but I knew in the long run it would be a handy skill.

Once I had a bake that I was happy with I came back into Maya and added different colour Lamberts to the separate parts of the desk before exporting to Substance Painter, this made it easier to focus on each area when in Substance Painter. 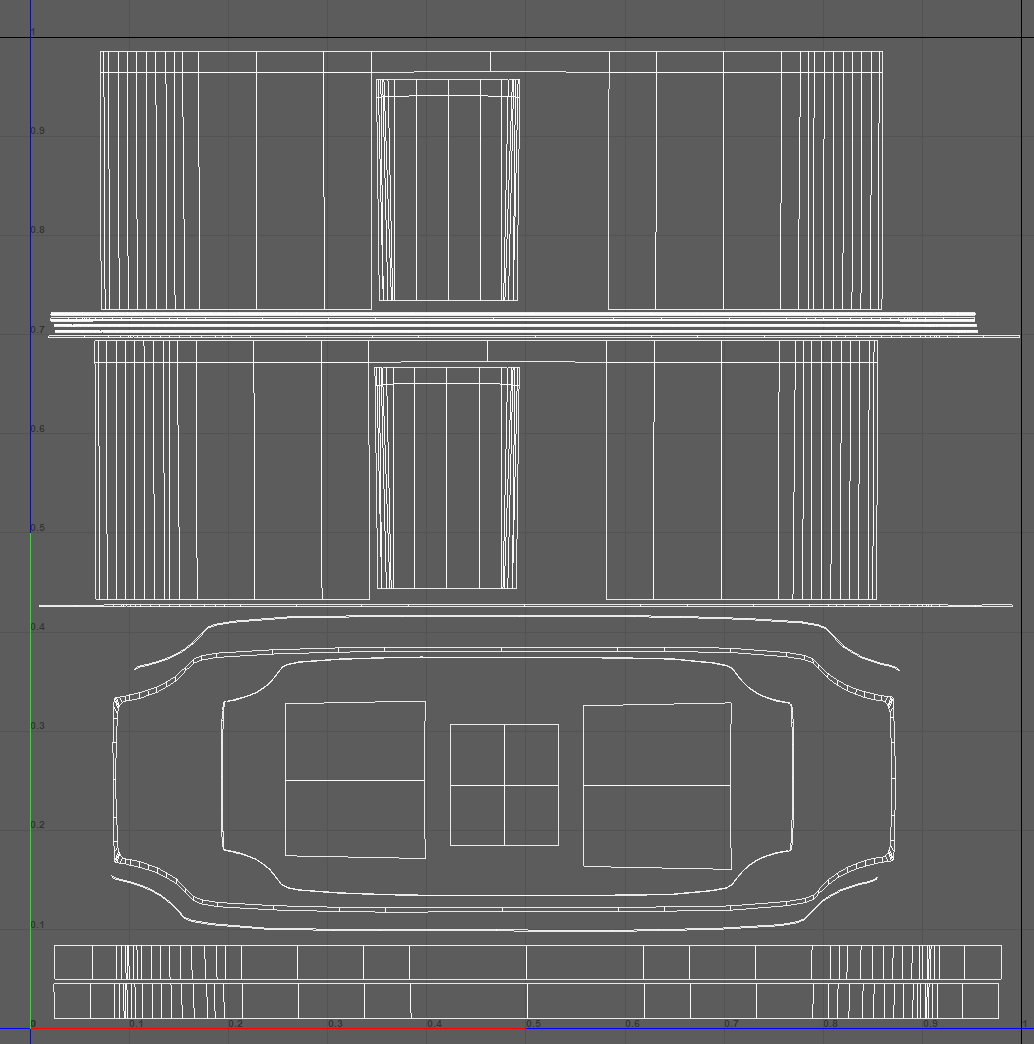 After I had finished quad drawing the low poly model it was time for the best part of the modelling process, UV mapping (Yeah right).  These are the UVs for the body of my desk.

Then to create the low poly that I would bake the high poly detail onto, I began quad drawing over the high poly parts. This also allowed me to get better edge flow and make UV mapping easier for me.

Then it was time to create a high poly model. I used the sub division modelling method to create my high poly. This involved adding supporting edge loops round various parts of my model so that when I smooth them I get a nice looking result.

This is what my desk was looking like with the adjustments.

I also created a new pillar to go on the table.

I then created a new table top.

After creating the first prototype of the desk I wasn't happy with the shape of it. It didnt resemble Tommy's desk as much as I wanted it to. So I then began another blockout for the body of the desk. I created the curves round the edges using a the "Boolean" tool in Maya. 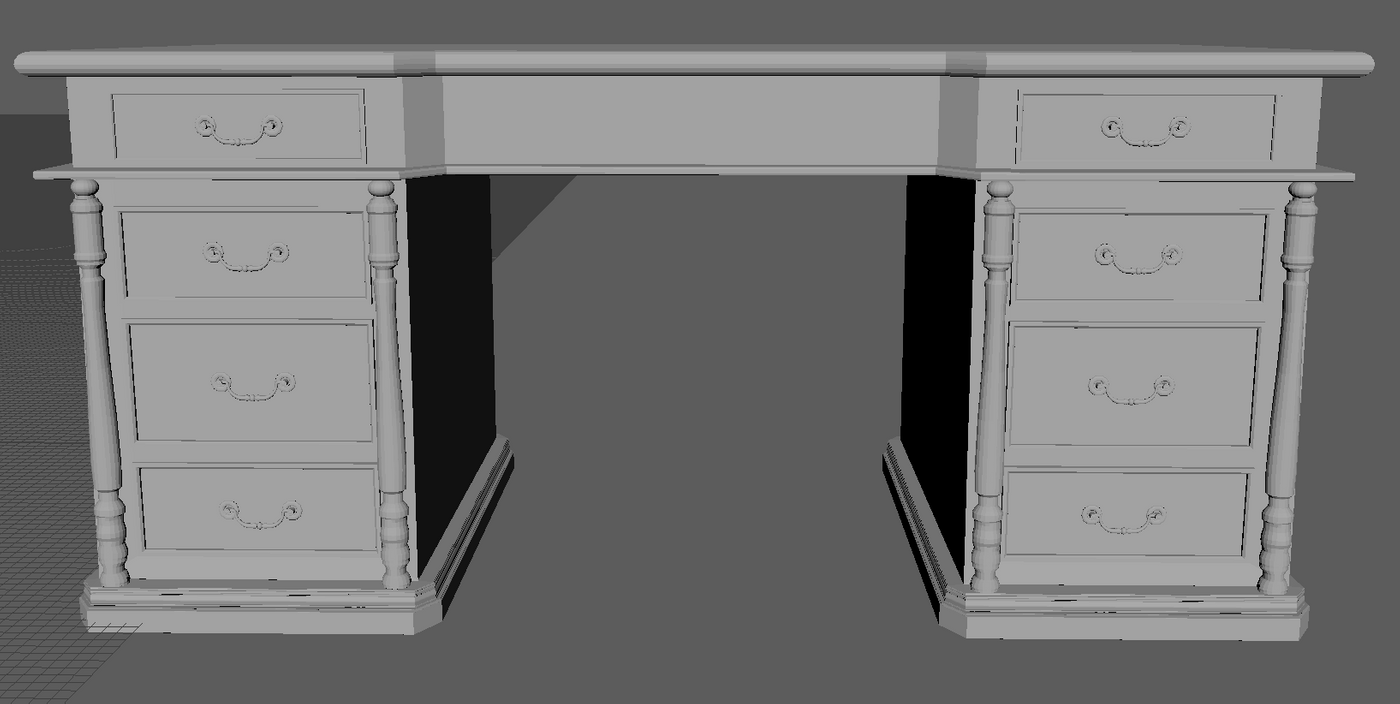 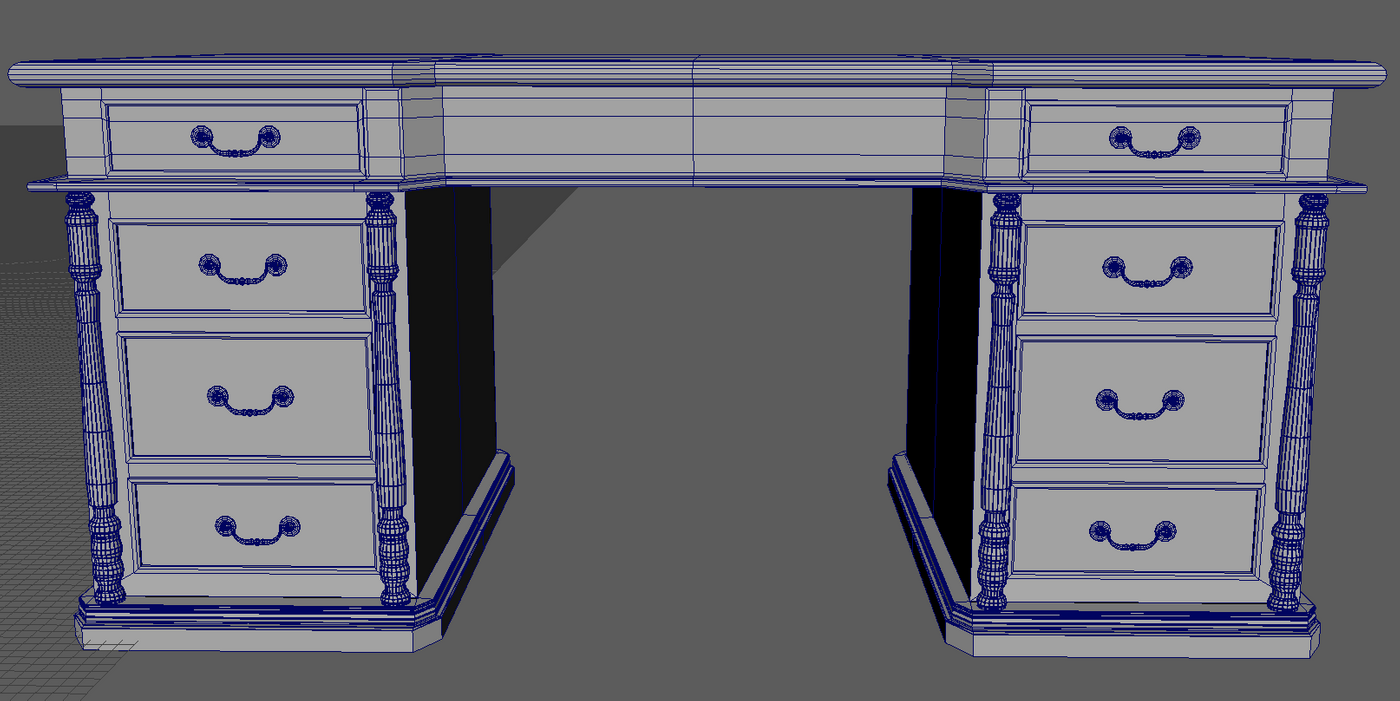 This is what the desk was looking like now with the skirting boards.

Then using the mirror tool and extrusions created the full skirting board. 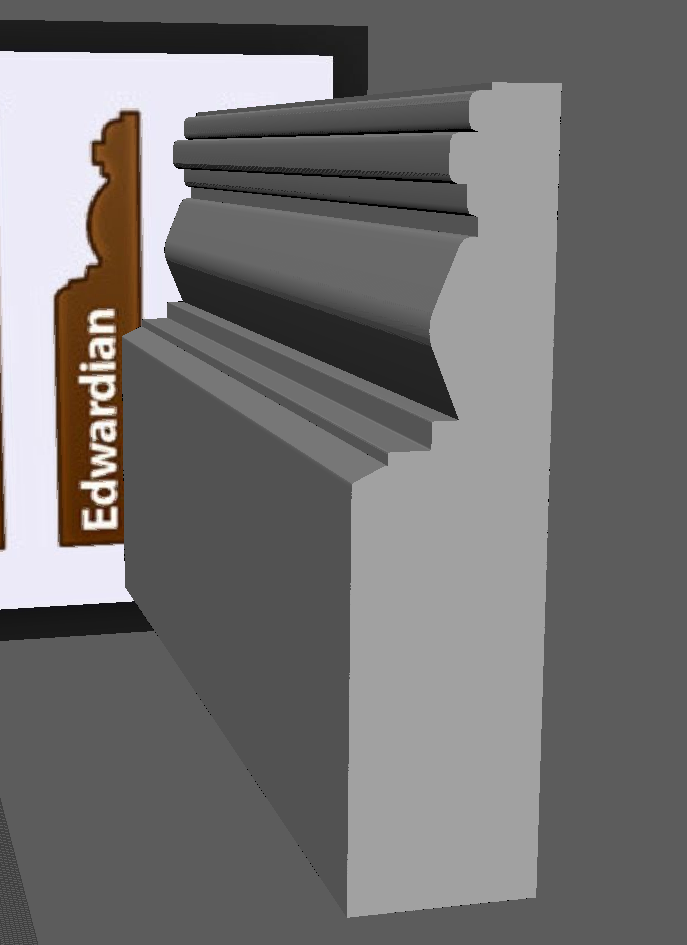 I then used the same technique as the pillar to create the skirting board for the bottom of the desk. 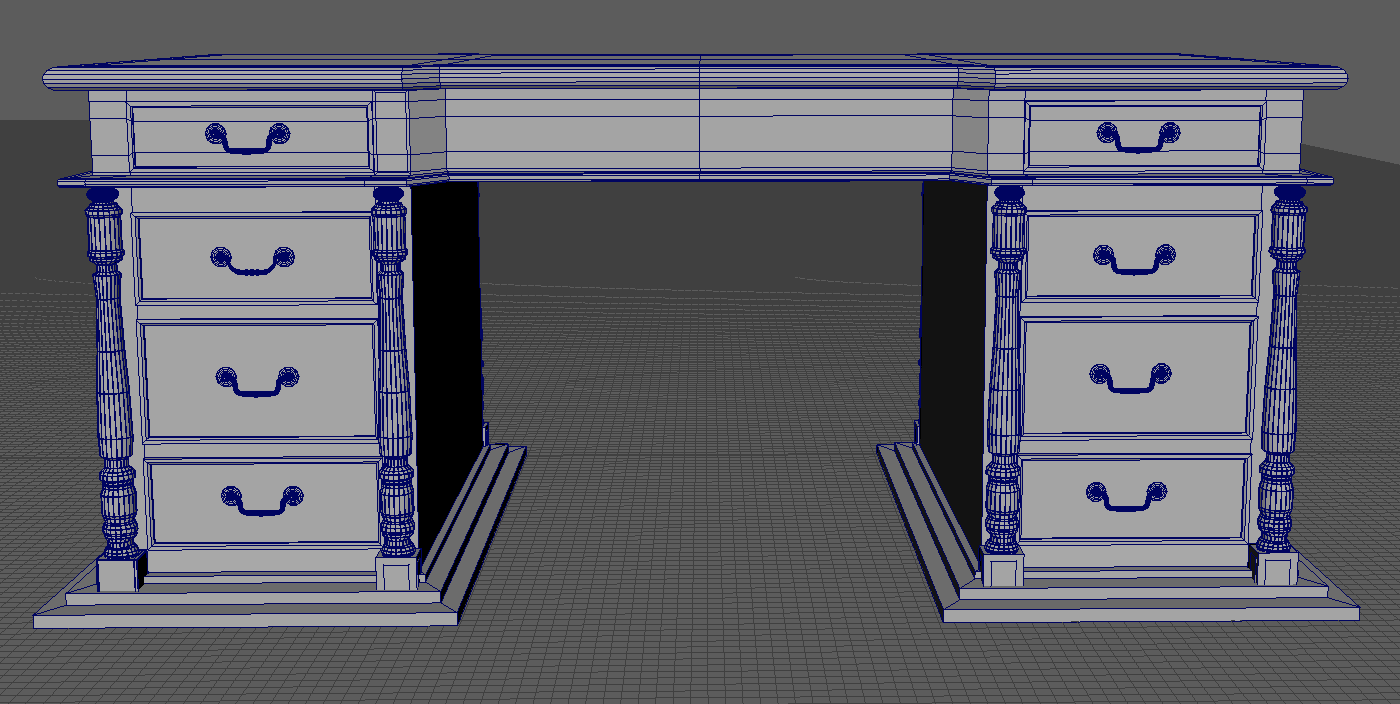 I then mirrored the half to get an idea of what the full thing would look like so far. 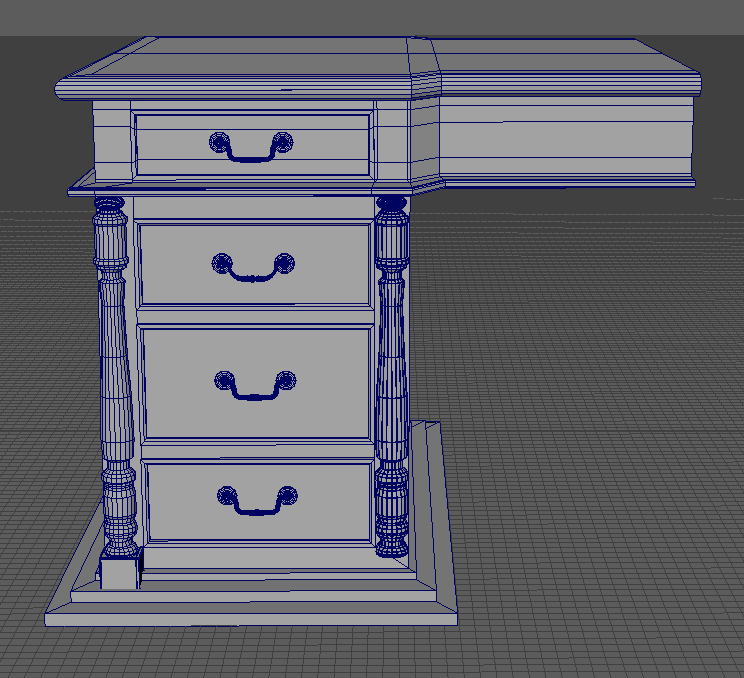 This is how my desk was looking with all the parts created so far.

I wanted to create a pillar for my desk so I went on google images and found the image above. I then imported this as an image plane in Maya and traced over it using geometry this was the result. 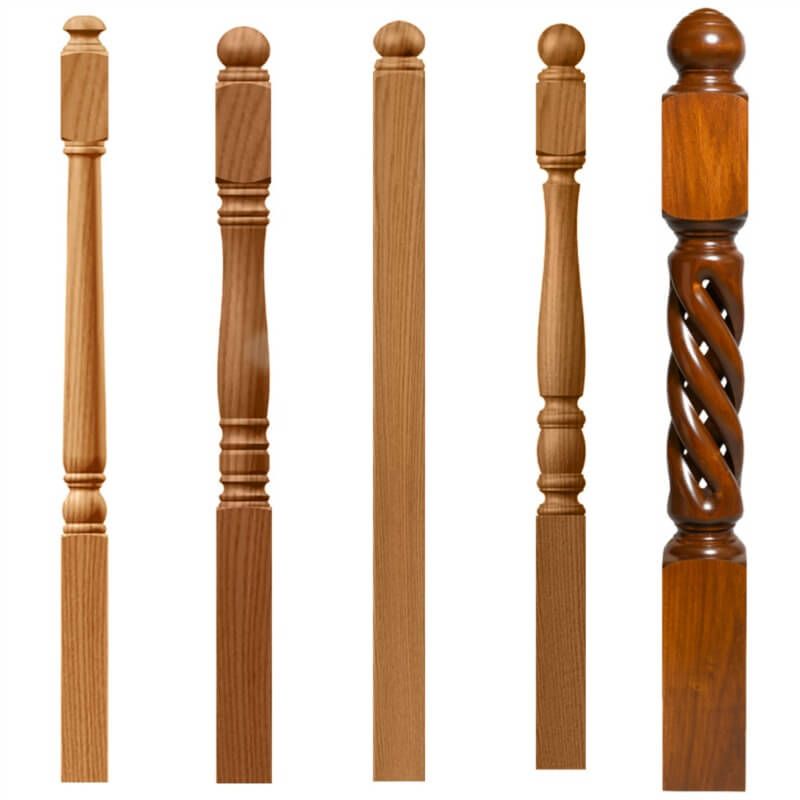 Then I created the handle for the draws using mostly torus' and cylindrical shapes. 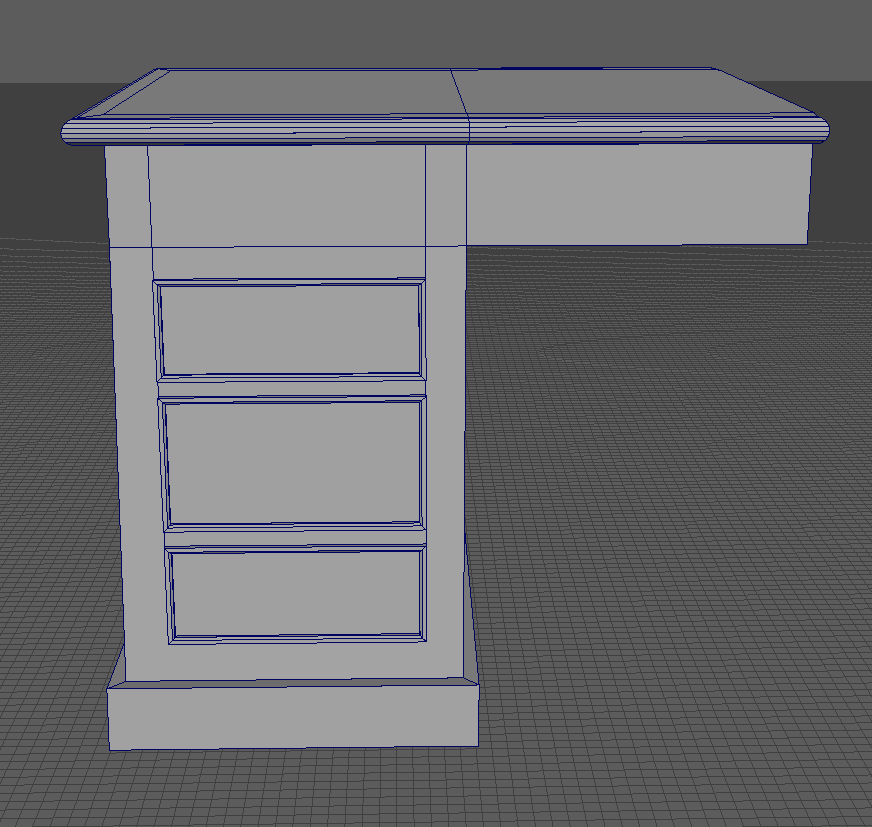 I then added a top and a bottom. 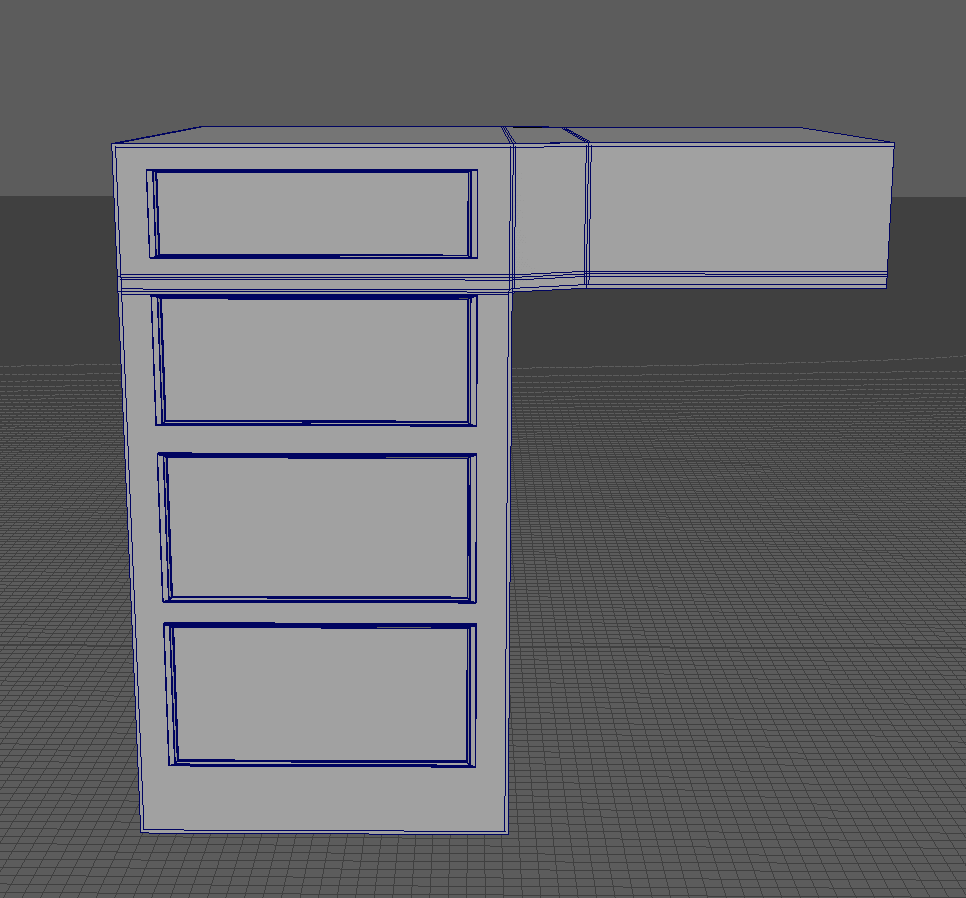 Then I added some draws and cut the model in half. I did this to reduce my workflow, because the desk is going to be symmetrical I can just use the "Mirror" function in Maya at the end to produce the full model. 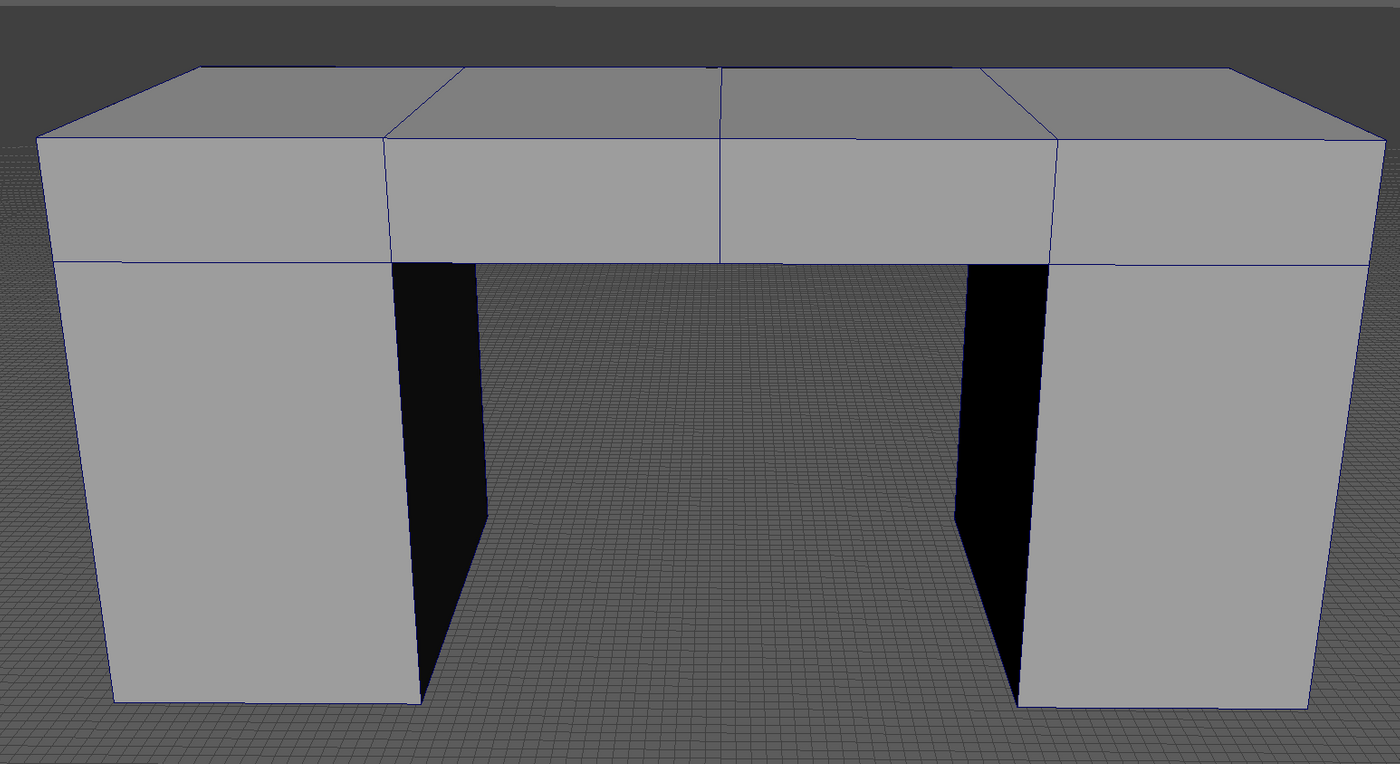 Then in Maya I began to block out the basic shape of the desk using primitive shapes. 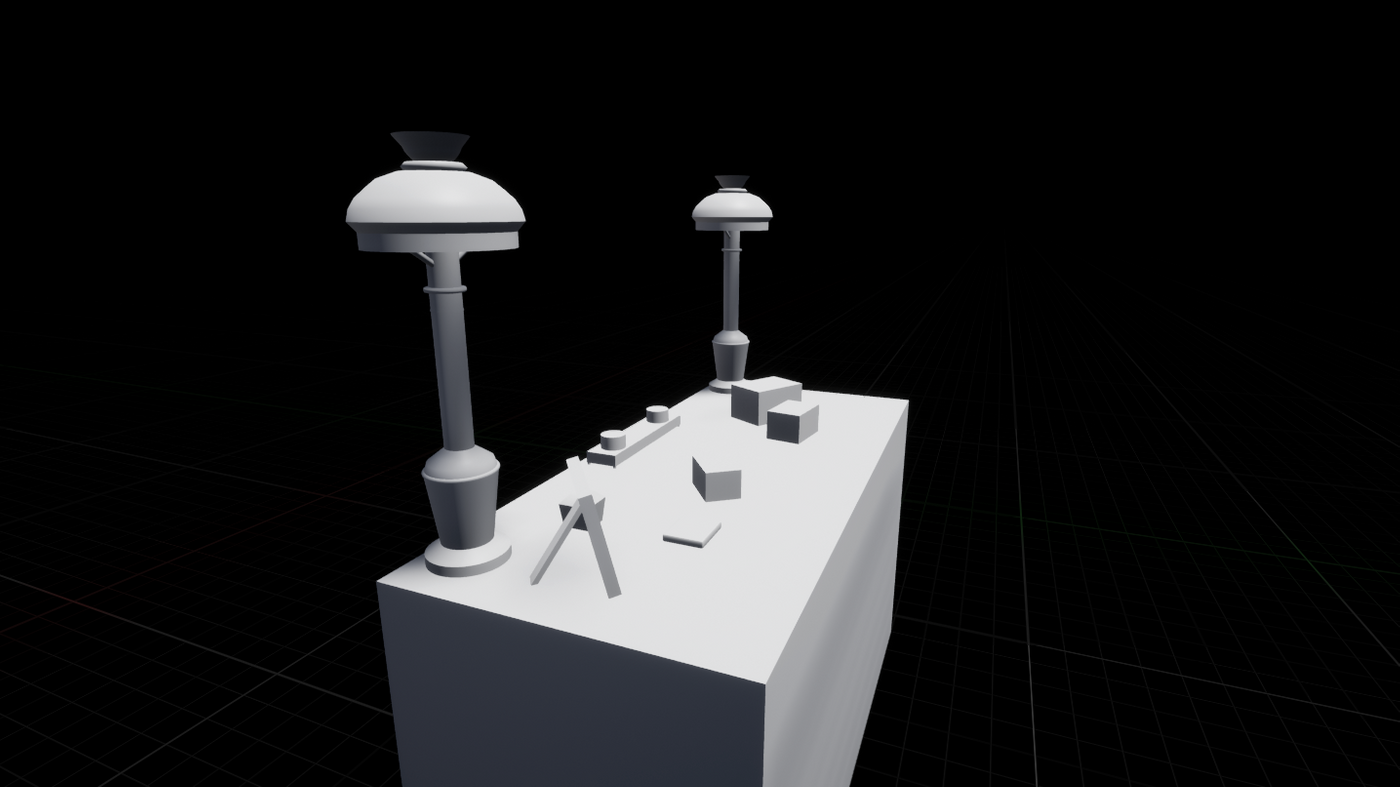 This is my first blockout model inside Unreal Engine. Originally I wanted to create the desk with all of the props on top of it. However, due to the timeframe I had I decided to focus primarily on the desk and if I had time at the end I could do any props. 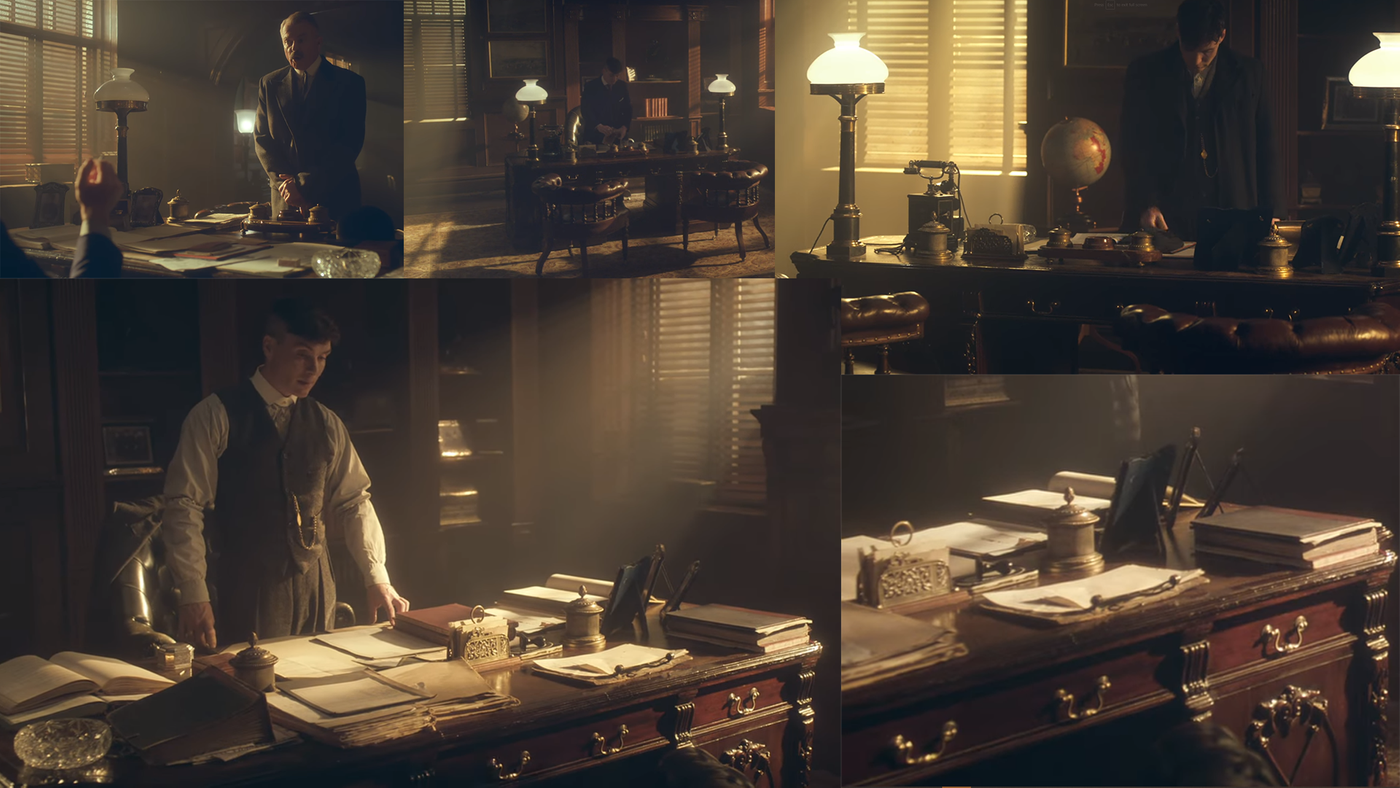 After looking at some of the cinematography of the show I decided that doing any sort of environment would probably not be the wisest idea due to the time frame which I had to complete the task, so instead I decided on recreating Tommy Shelby's desk seen in his office.

Finding reference imagery proved harder than i thought, the usual Google image search wasn't pulling in many good shots of the desk, so I had to use an alternate method. I began scrubbing through the episodes on Netflix and every time a good shot of the desk came up,  I screenshotted it. After I had got enough screenshots I compiled them into a mood-board to make it easier to get reference instead of flicking through the separate images. 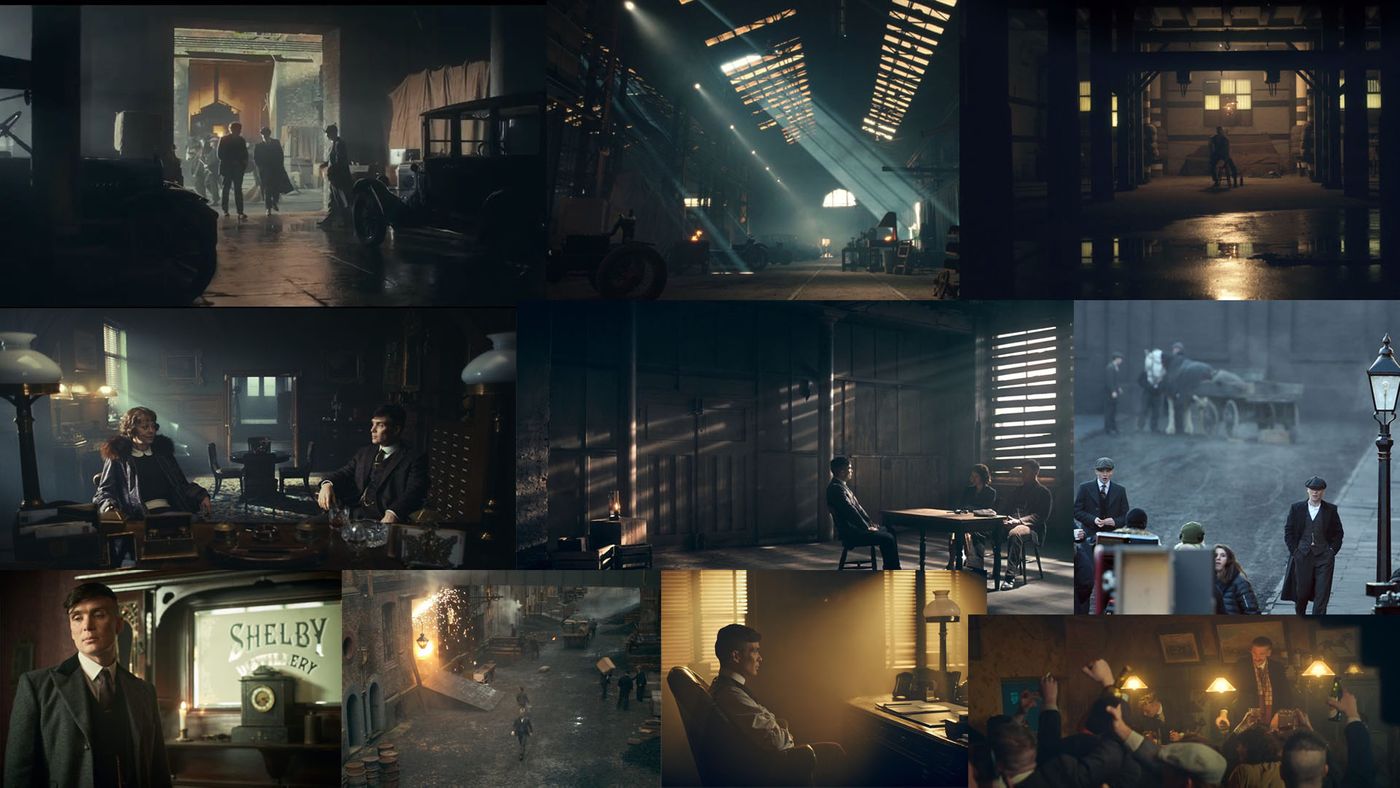 To begin this project, I created a mood board of possible environments from the Peaky Blinders that I could recreate. In doing this, it also allowed me to establish the general vibe/lighting of the show which will be useful later on in the project.