To start my Demo Reel, I wanted to create something that would reflect me and what inspired me to pursue this craft. Transformers (2007) was a huge influence for me and it only felt right to make a piece that was like a love letter to my younger self. From modelling, texturing, rigging and even animation, I really used all of my tricks on this one.

I was fortunate to have the opportunity to collaborate with Josh Karlin, another student studying at Gnomon with a concentration in FX. He was responsible for creating the smoke sim that appears beneath the Mech. This experience helped learn how to prep my assets before sending them off FX artists. All other smoke effects are fog cards added in compositing. Thank you Josh!

Initially, this piece was just the mech, but I felt like a mech on a backdrop was kinda boring and I wasn't content with the presentation- so I took a stab at doing an animated sequence. Early on, I knew I wanted a camera move so I built a noised based rig for the camera so that I can easily animate the move and have control of the hand held feel. This was especially useful to add more shakiness whenever the mech plants its feet and to design the environment to the shot. I needed this project to be as iterative as I could make it and by having a camera setup, it definitely streamlined my process.

The process was very back and forth and required a lot of experimentation. Even while I was animating and spitting out playblasts, I was always in the 'block out' phase. Every time I finished a prop, I would look back at the main shot and reevaluate to see if the placement was hurting the composition or not. The main thing I learned from this project was depth. When building structures or placing props, I was always looking for an opportunity to suggest that there was much more to the environment than what is shown. Key principles I stuck to were finding ways to create overlap and parallax, while also looking for interesting shapes and how they change over time. 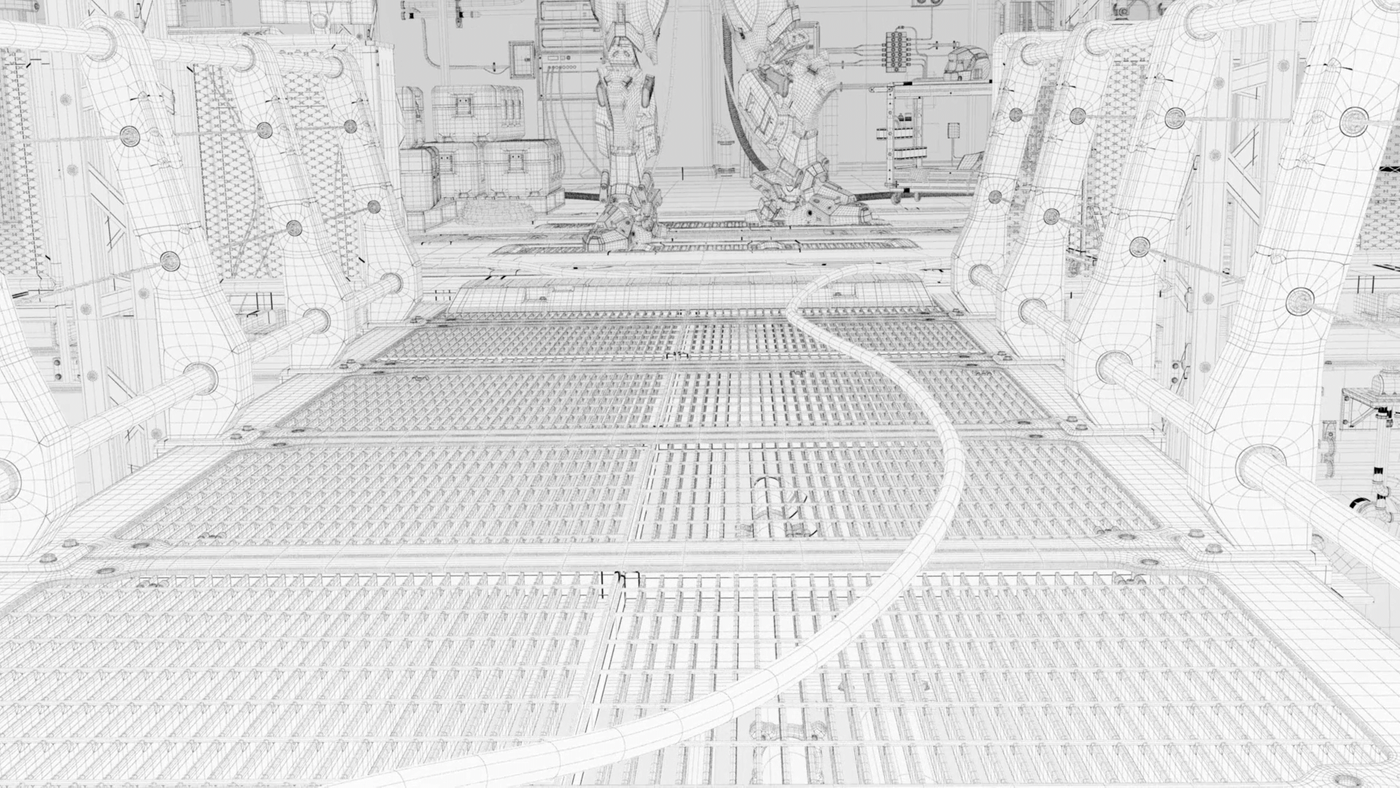 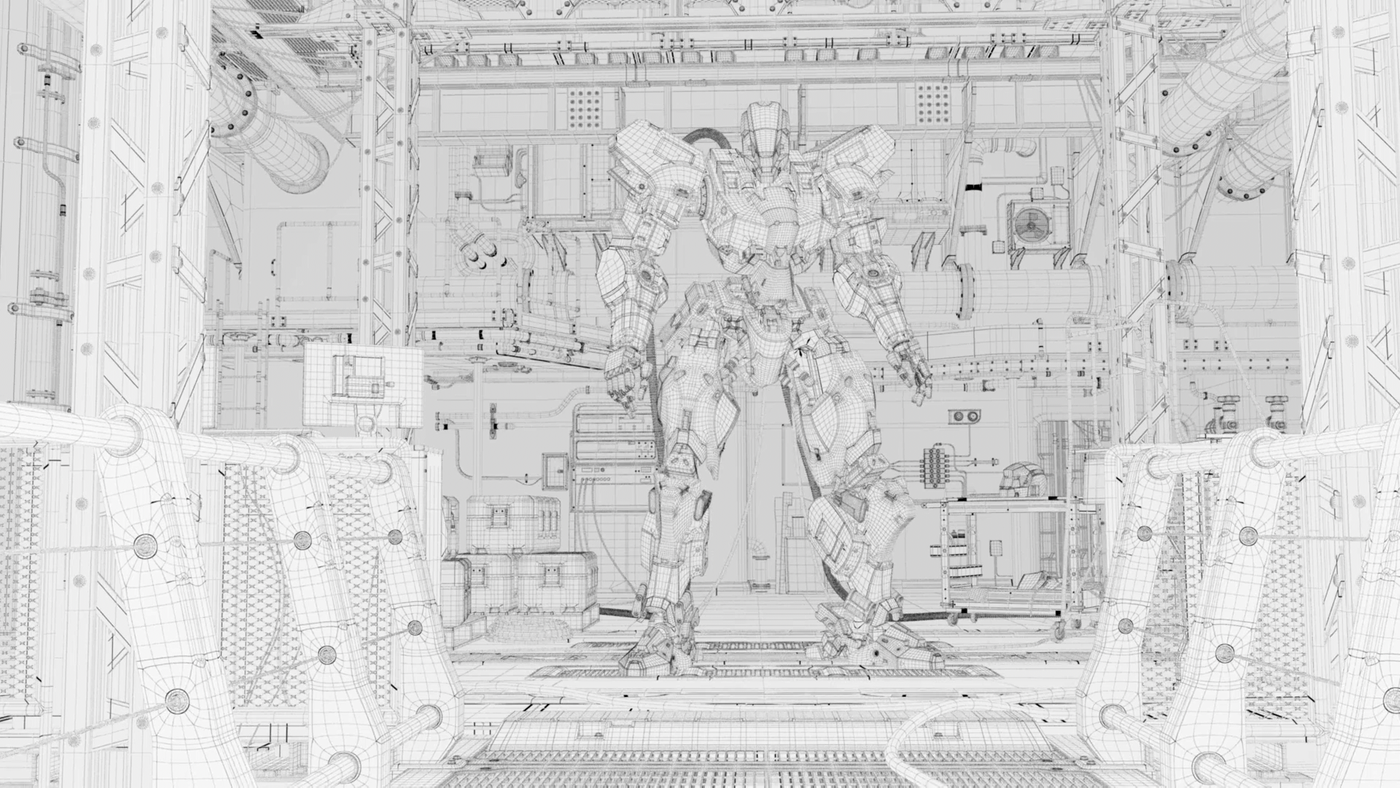 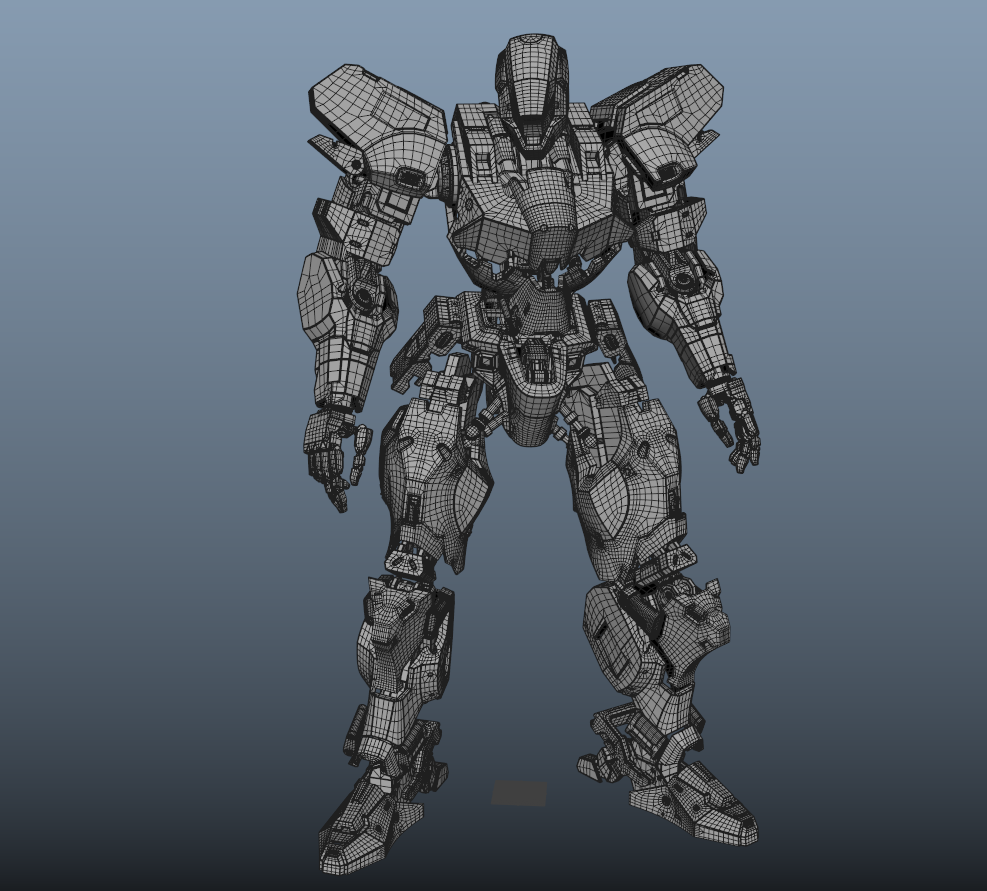 Growing up poly modeling had always been my weakness, and during my time at Gnomon I really wanted to focus on getting better at it. For this project I wanted to take a step outside my comfort zone and tackle something more stylistic. The original concept was very loose and sketchy, which gave me a lot of freedom to try to design specific areas of the Knight, but I tried to find ways to incorporate the gestures of the original so that I could retain the 'energy' or 'essence' of the piece.

I started off blocking out the big main shapes and building a temporary rig. The setup is relatively simple, just joints, some controls and subgroups to stay organized (well, as much as I could bouncing between different designs). The rig was extremely helpful when it came to modeling. At frame 1 I had the character zero'd out and I had another frame with this pose. With this set up I was able to model pieces symmetrically and see how they would be affecting the silhouette when posed. The massive benefit of setting things up this way is that you know where the joints are and keep range of motion in mind. Although most of the joints are covered, I felt like it helped to ground the character knowing that the design was functional. 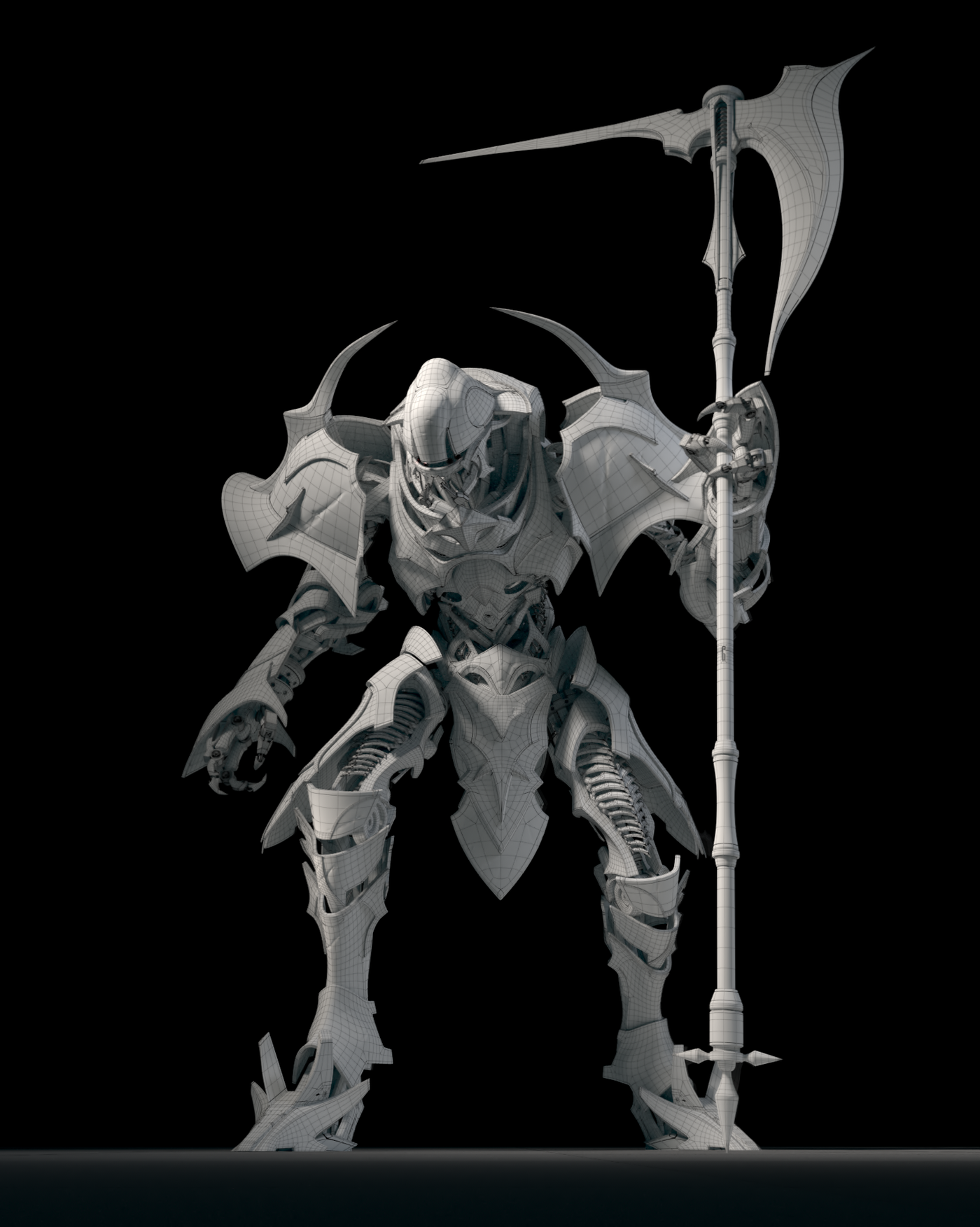 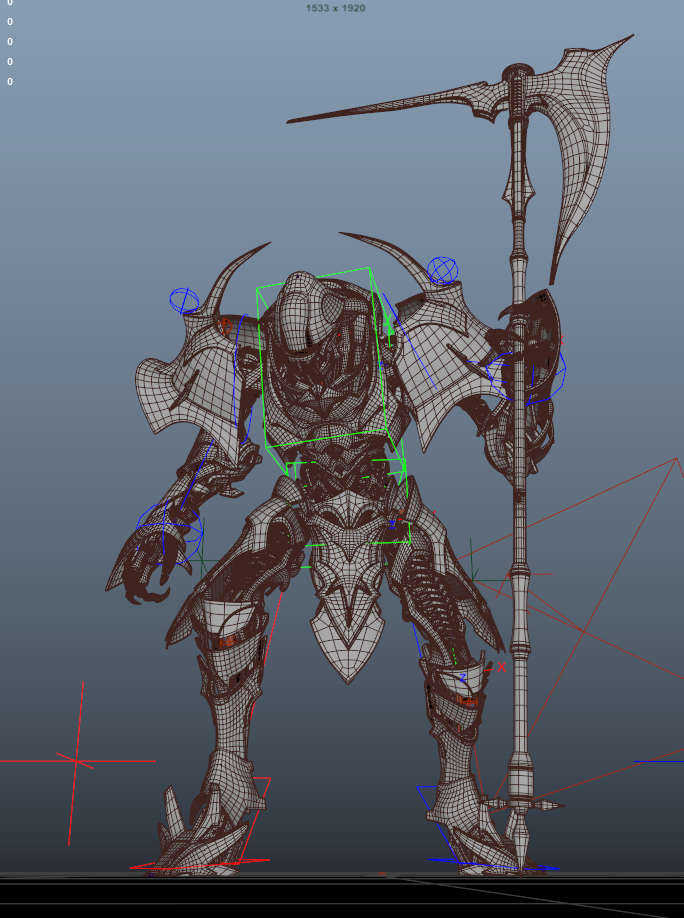 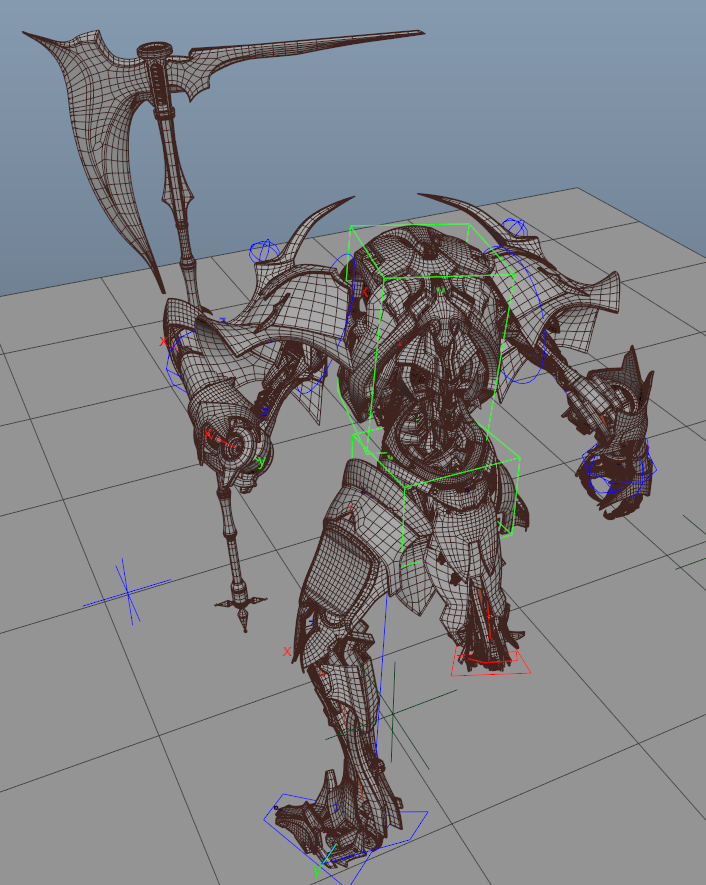 Most of my portfolio is hard surface based so I wanted to step out of my comfort zone and tackle an organize piece. This was my first time sculpting a character and added a plethora of new techniques into my arsenal; from learning anatomy, simulating cloth, grooming and trying out new shading techniques. I think I learned the most from this project.

Like my other projects, it was very iterative. I loosely rigged the character so that I could have the standard A Pose to look dev, and the posed view to test lighting setups and composition. I would have retopologized the skull, but since it wasn't going to be deformed and I was approaching my deadline, a simple ZRemesh sufficed.

Most of the jewelry and ornamentation was modeled after reference I found on the The Metropolitan Museum of Art's website, they have an extensive collection of high res images of artifacts categorized by region and date. Highly recommend this resource as it helped my goal of creating something that felt regal or authentic. 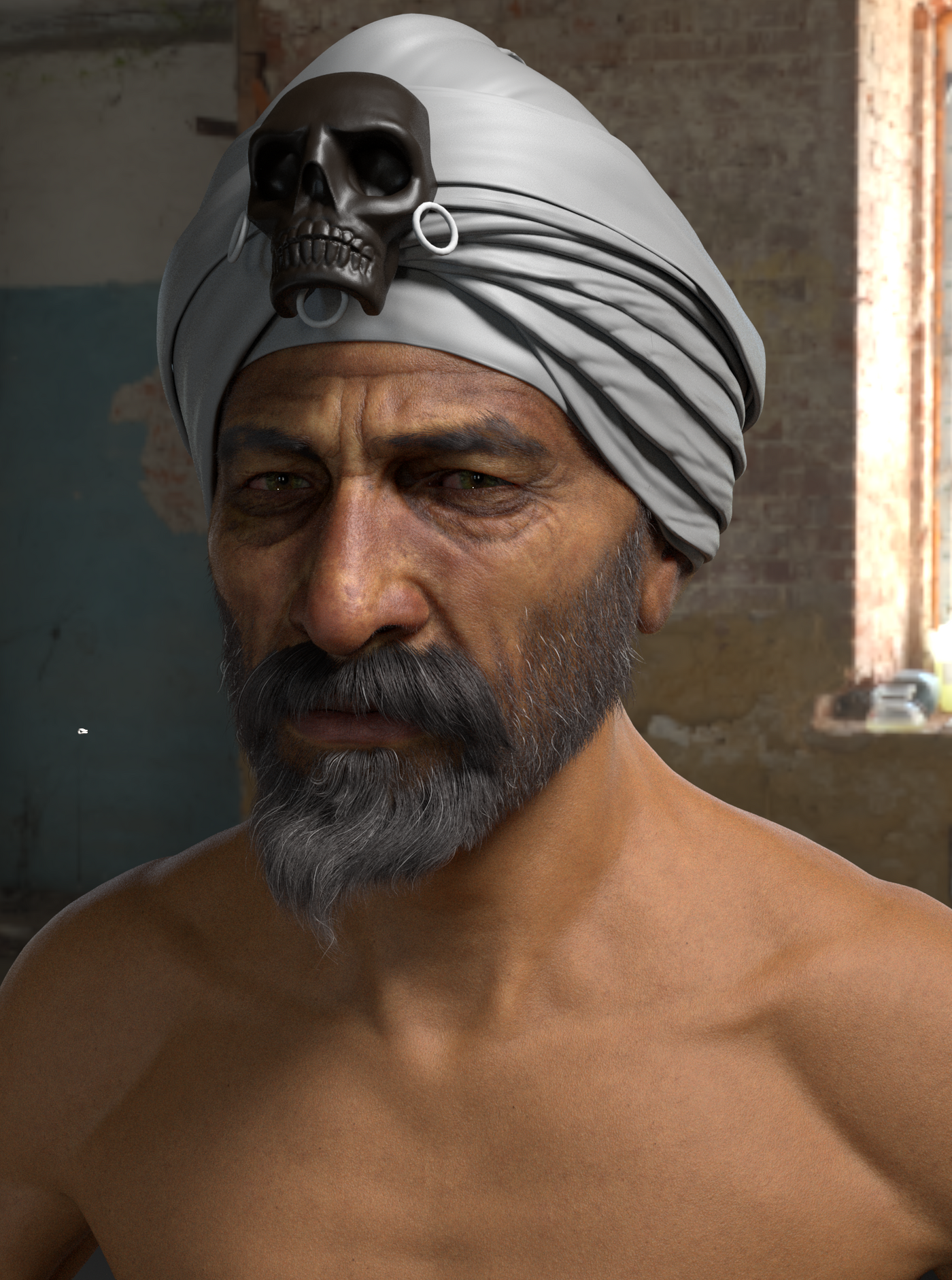 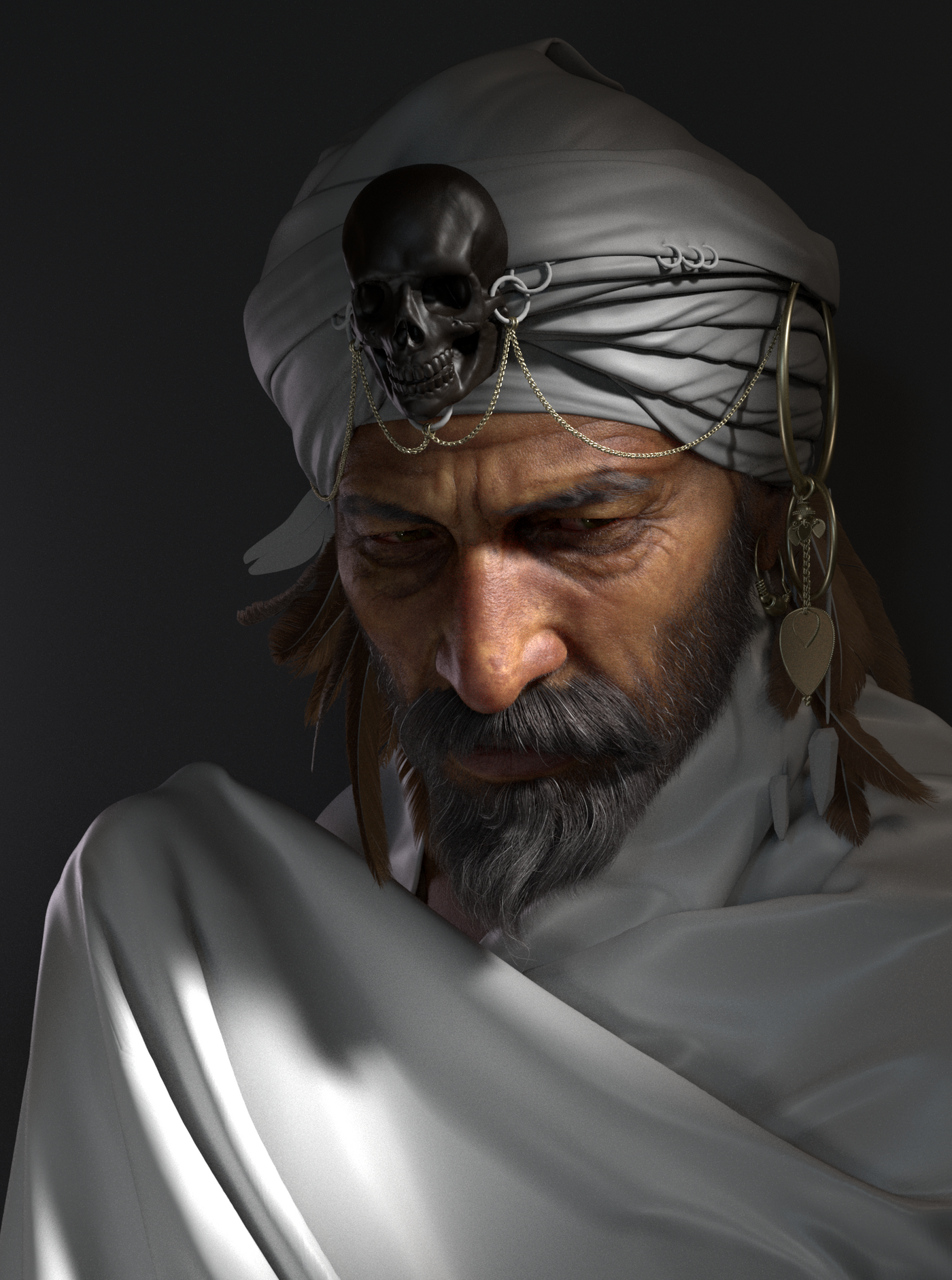 Big thank you to Tran Ma, Miguel Ortega, and Beau Janzen for guiding me through my student career, I couldn't have done it without them! You can find more breakdowns in my demo reel and more technical insight on my website. Thank you for taking your time to view my work!