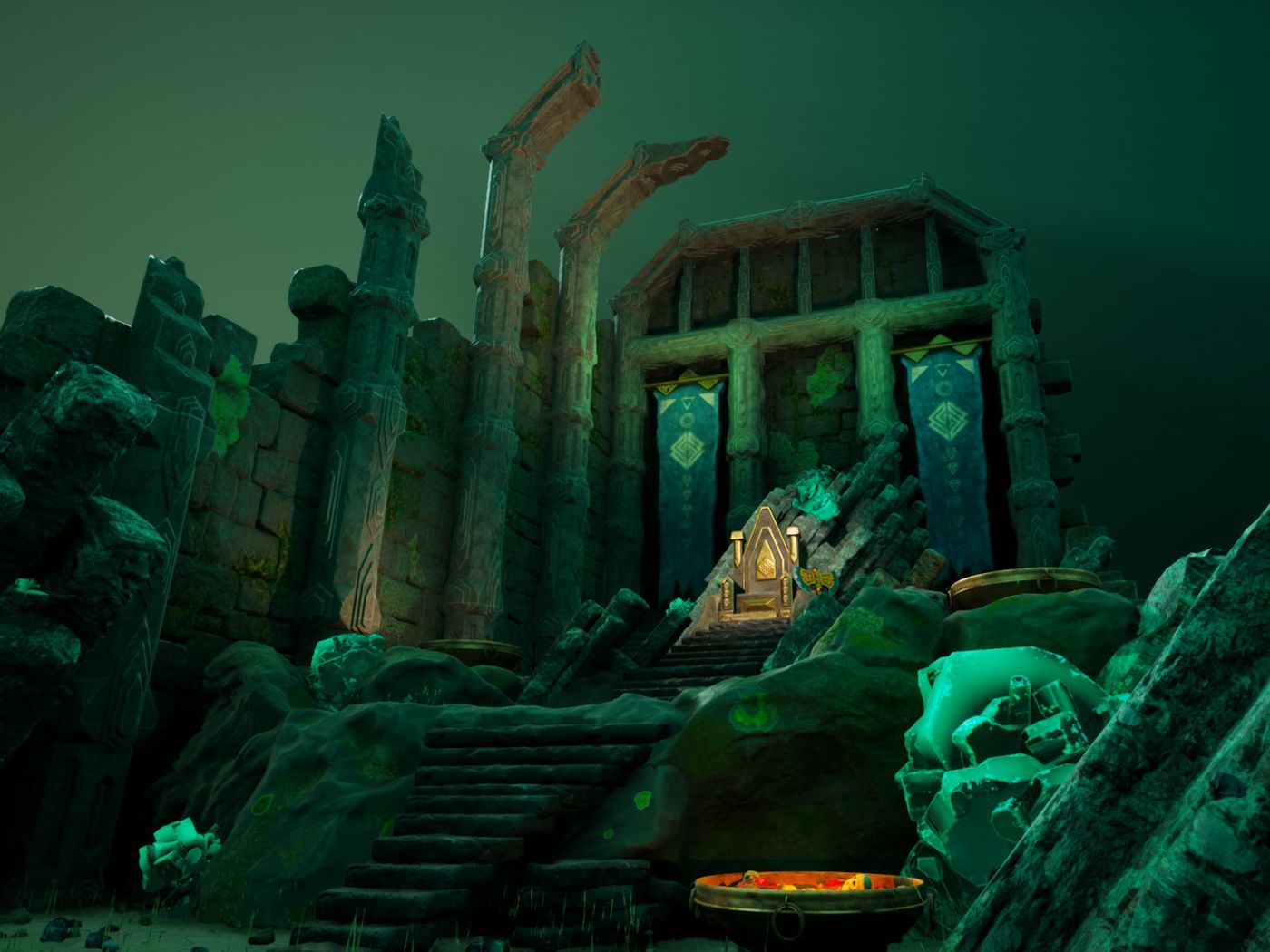 A collection of work completed so far at Escape Studios as part of my MA Game Art. Hope you enjoy and thanks for taking a look! 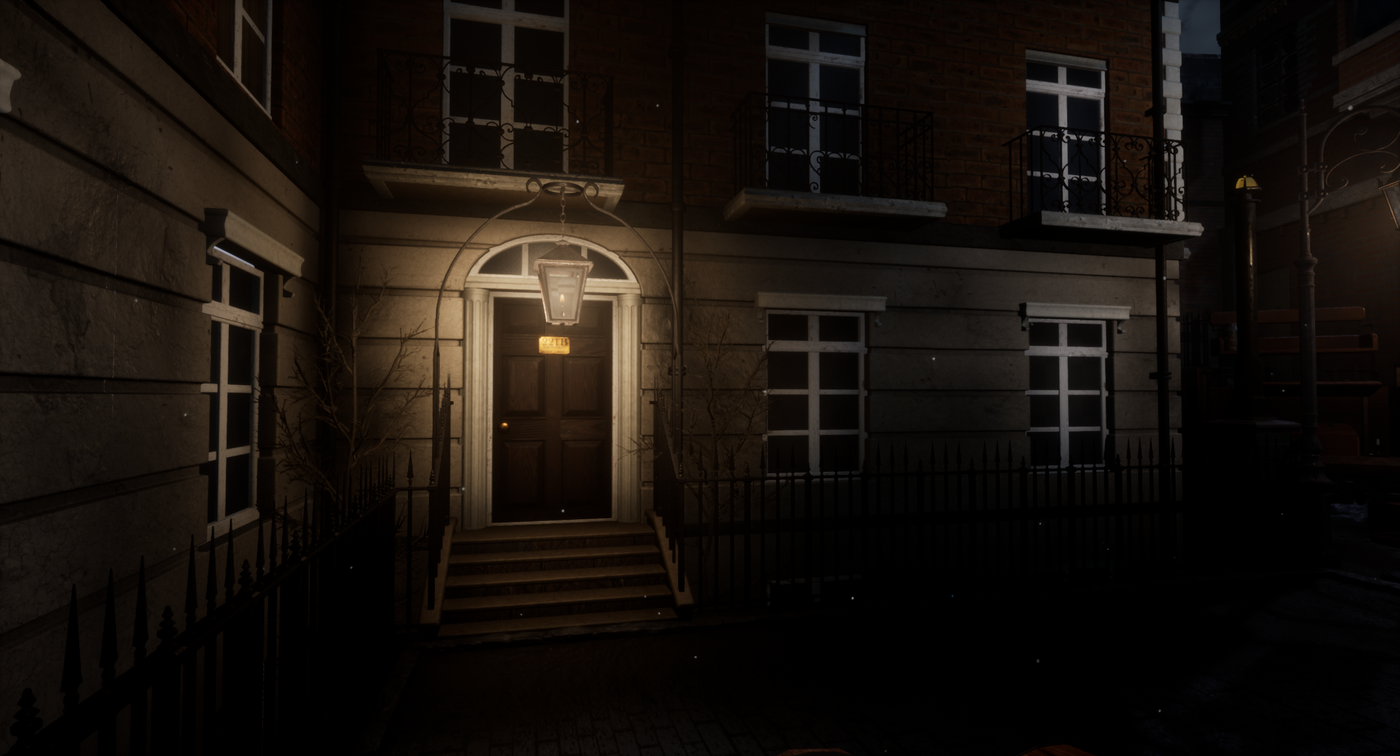 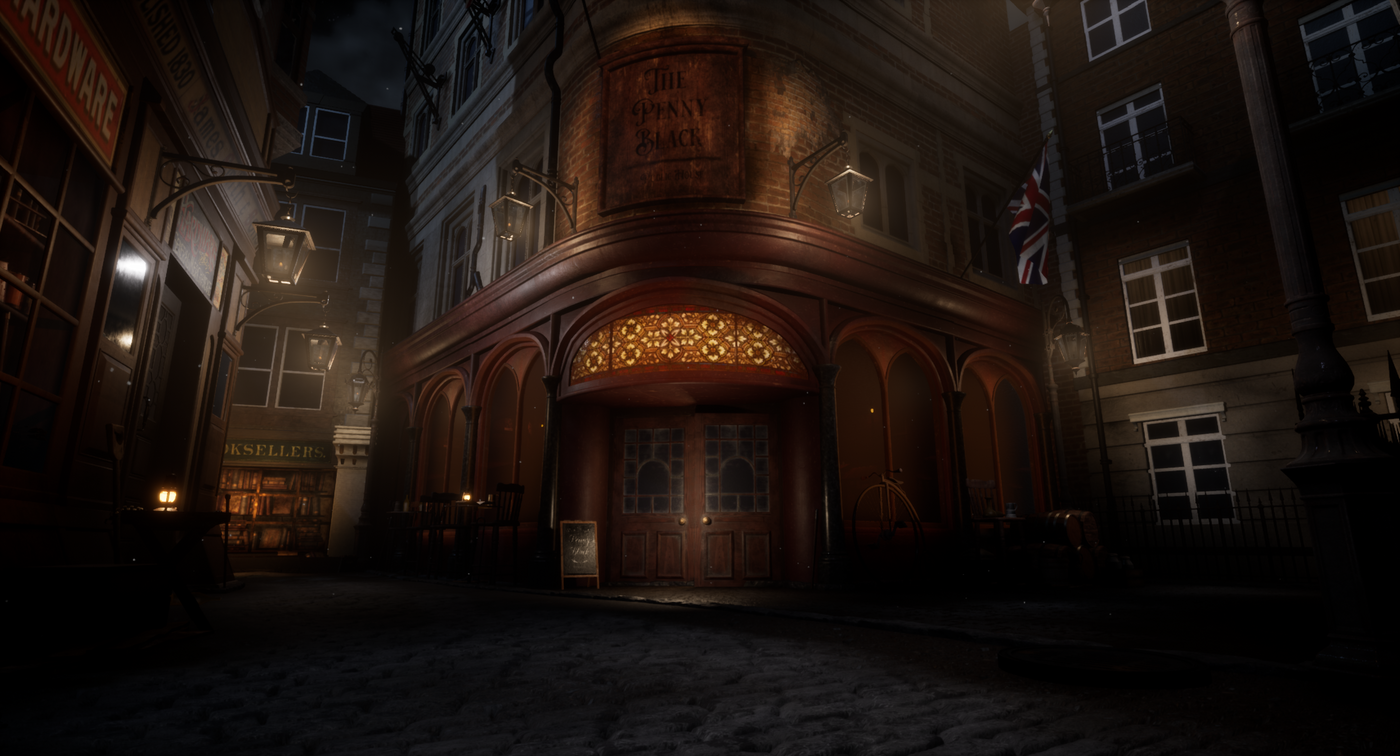 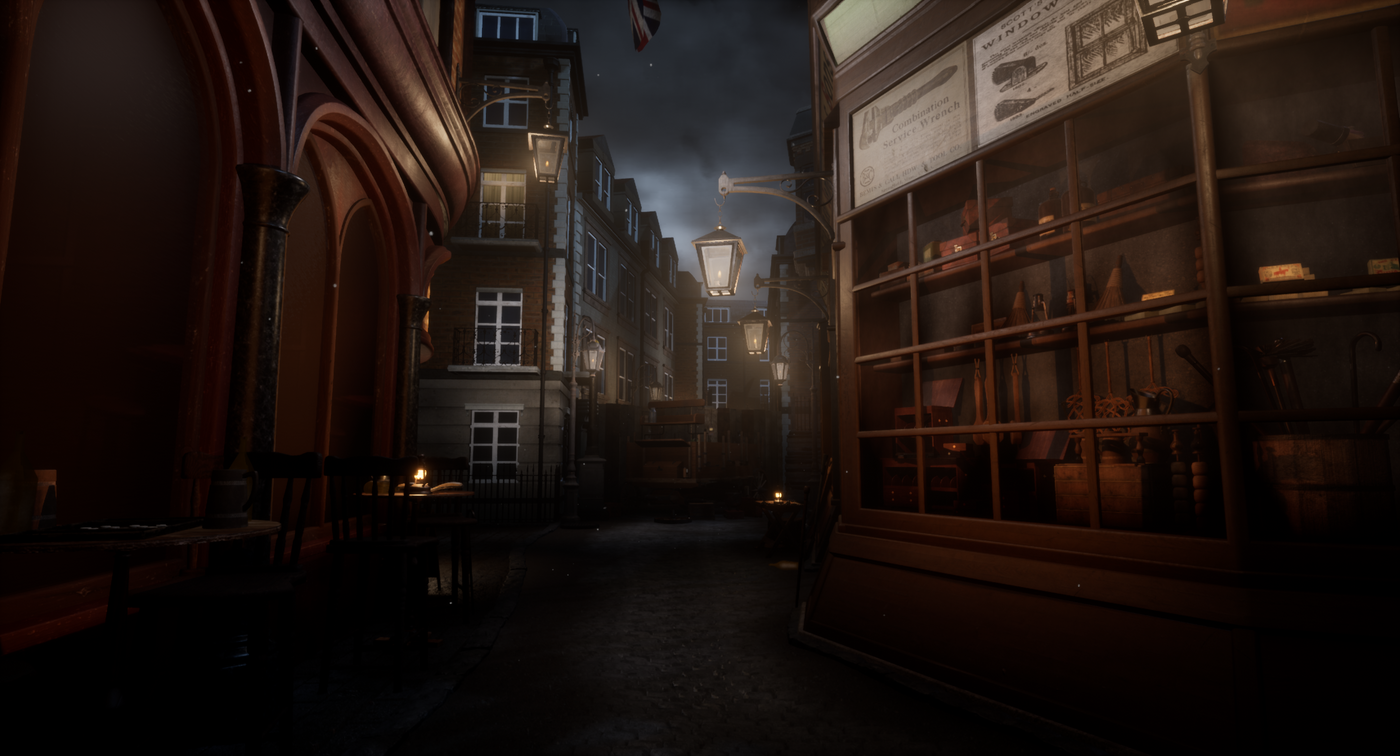 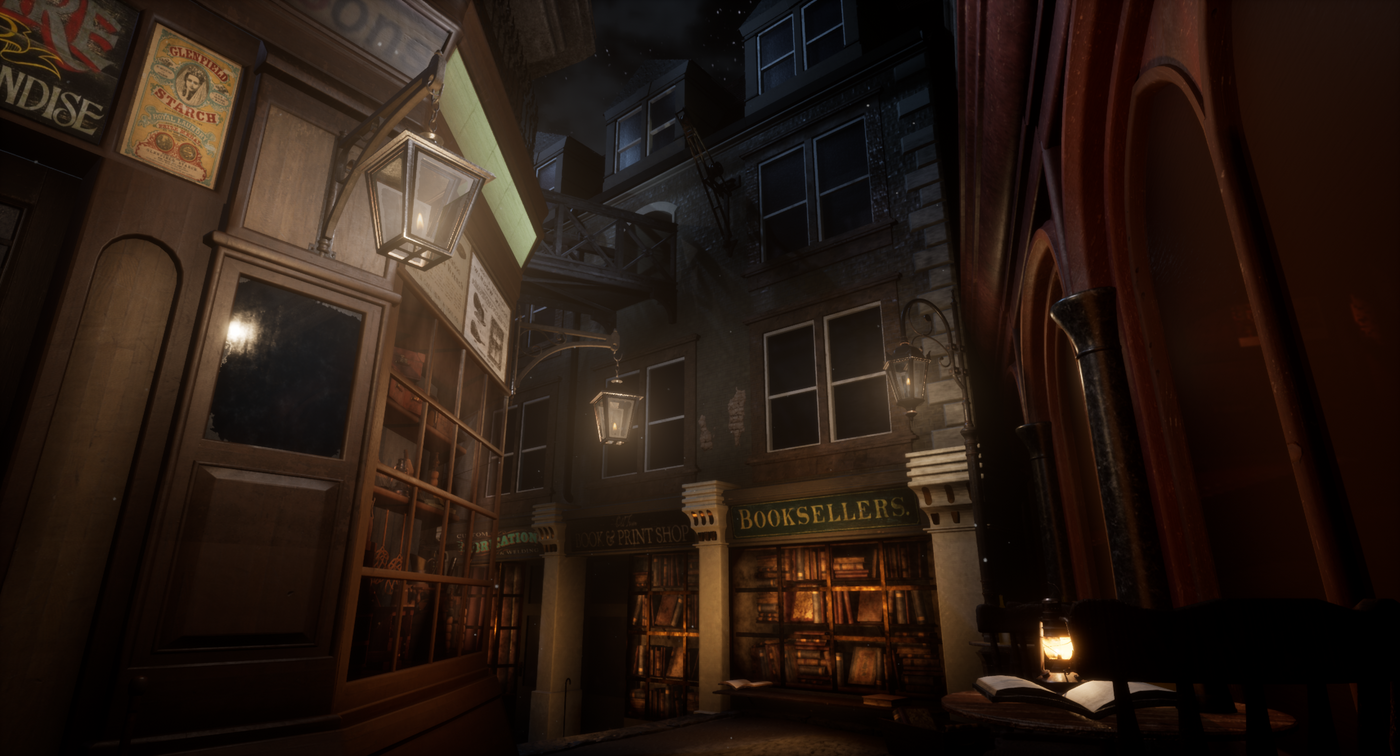 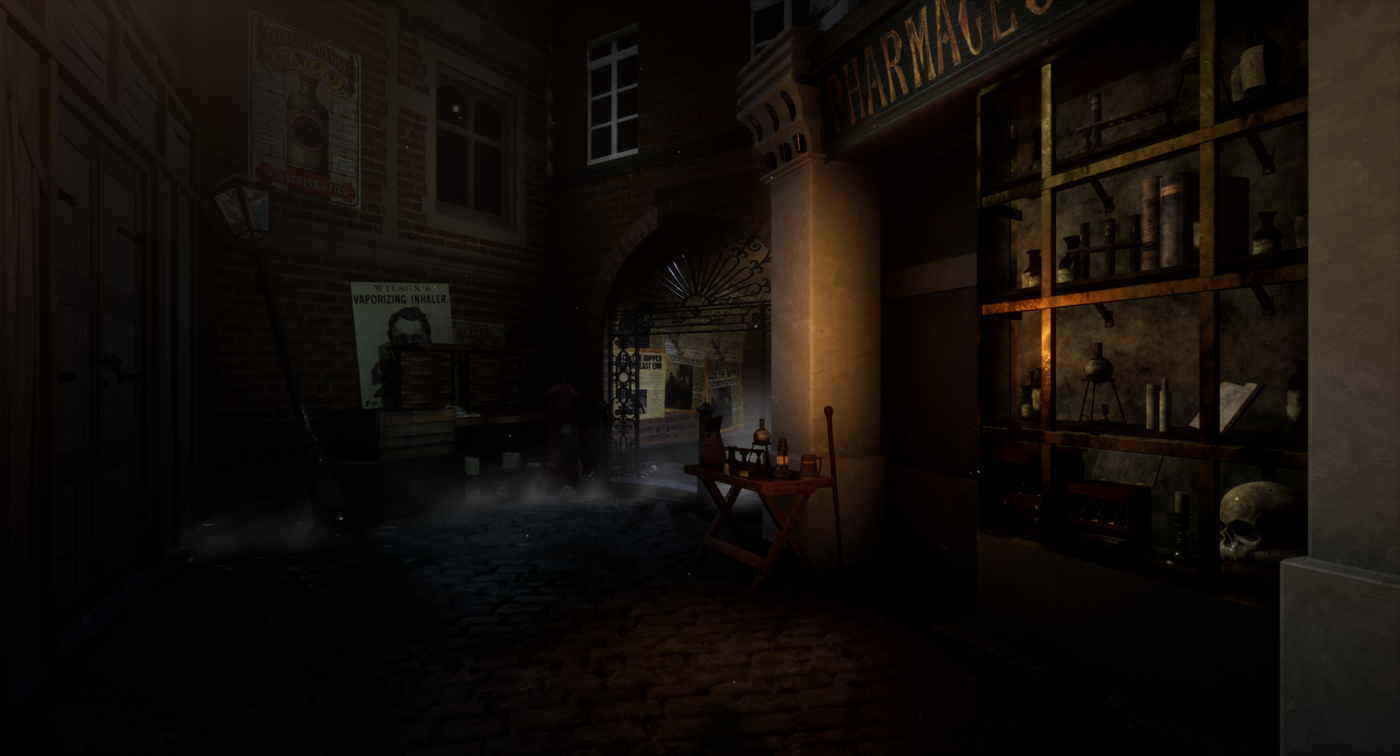 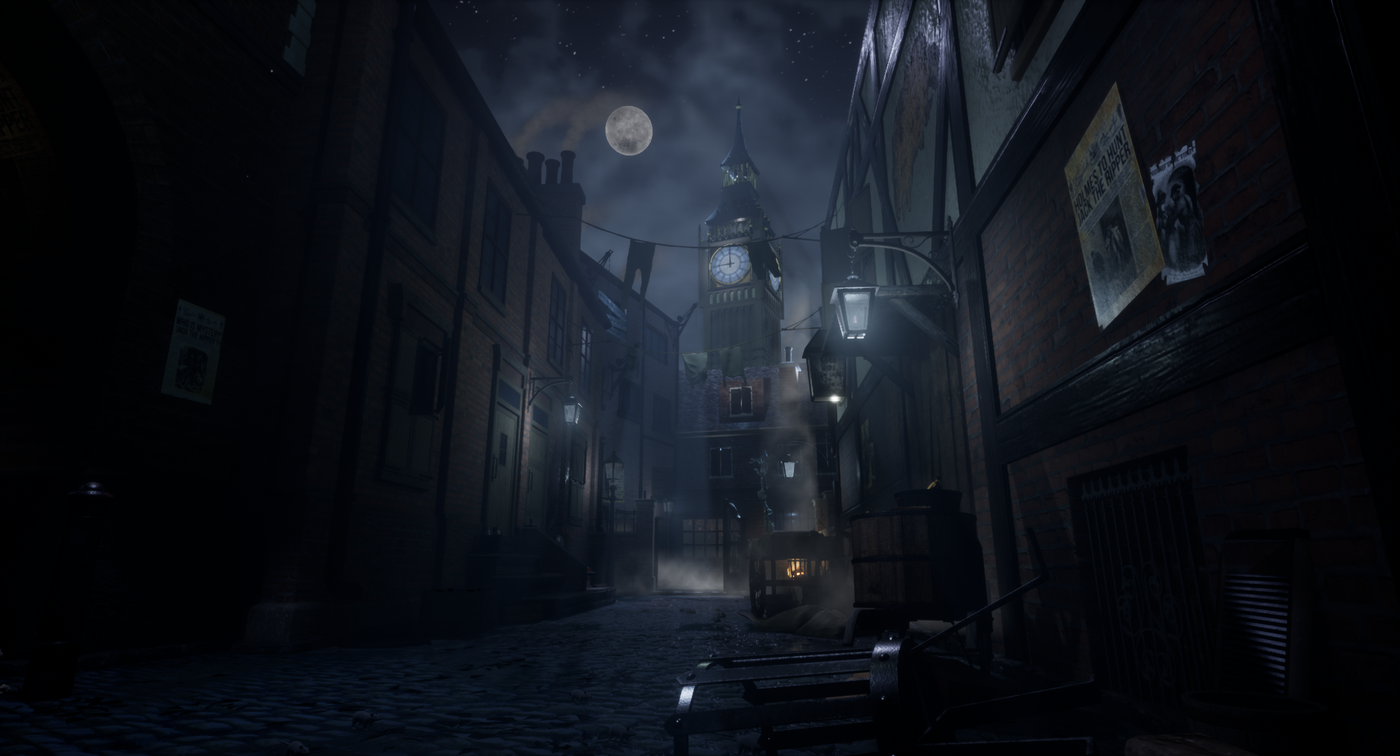 This group project, set in Victorian London, was inspired by the Sherlock Holmes movies and the Penny Dreadful television series. Our aim was to create an environment based around the narrative of Sherlock Holmes uncovering a dark and mysterious murder investigation. Red herrings point towards Jack The Ripper as the culprit, but as we progress through the level from an affluent area into a more impoverished area, we discover that the murderer is in fact the monstrous Dracula. The player starts at 221B Baker Street and descends into the decaying back alleys of London.

This project was completed by a team of 10, however I'll specify which areas I was responsible for.

I was responsible for the lighting the level, with the intention of creating a transition in atmosphere from the starting area to the finishing area by utilising light saturation. Warm tones are used in the affluent area at the beginning to create a false sense of safety for the player. As we move through the level blue and green tones come in to create a sense of dread and unease to match the horror aesthetic.

I created this modular kit which was used as the corner building in the starting area with a pub on the ground floor. We utilised the use of modularity together with trim sheets which helped us divide the work between us and efficiently create the assets needed for the project. 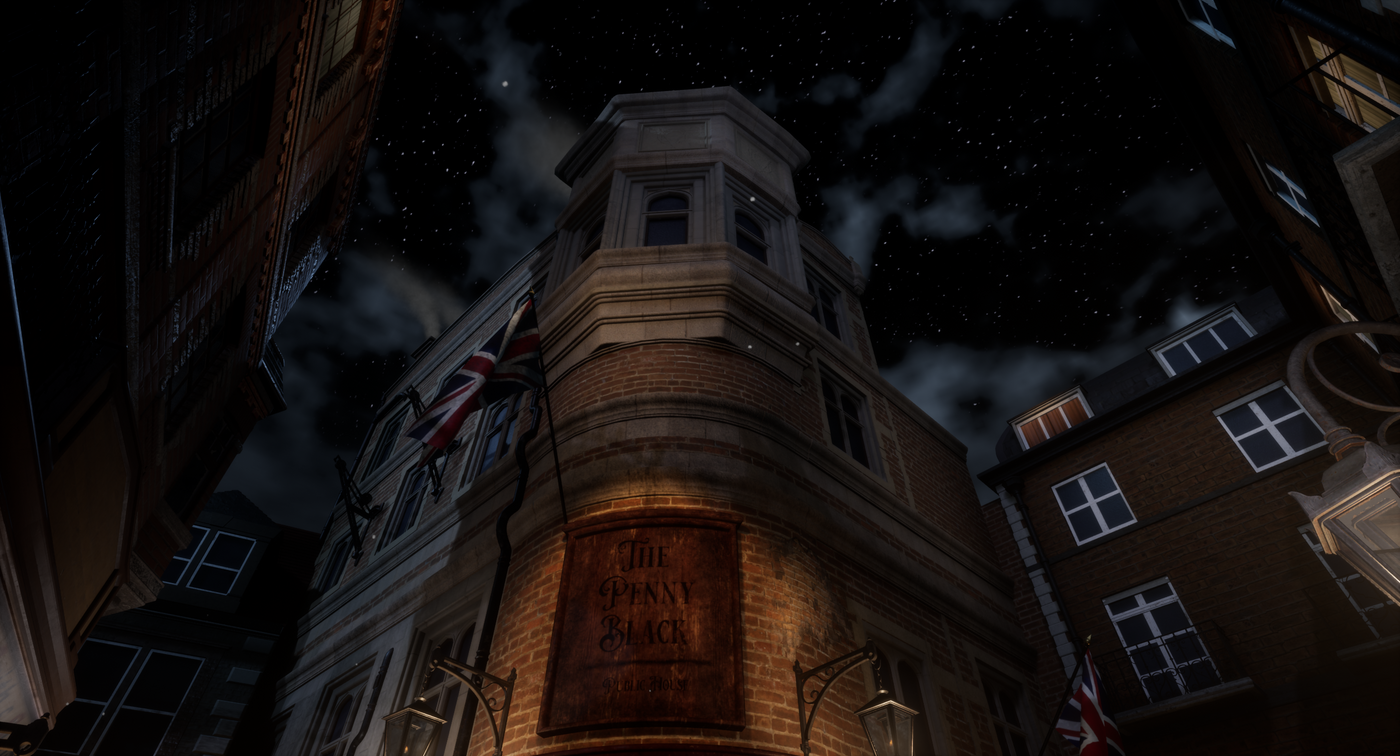 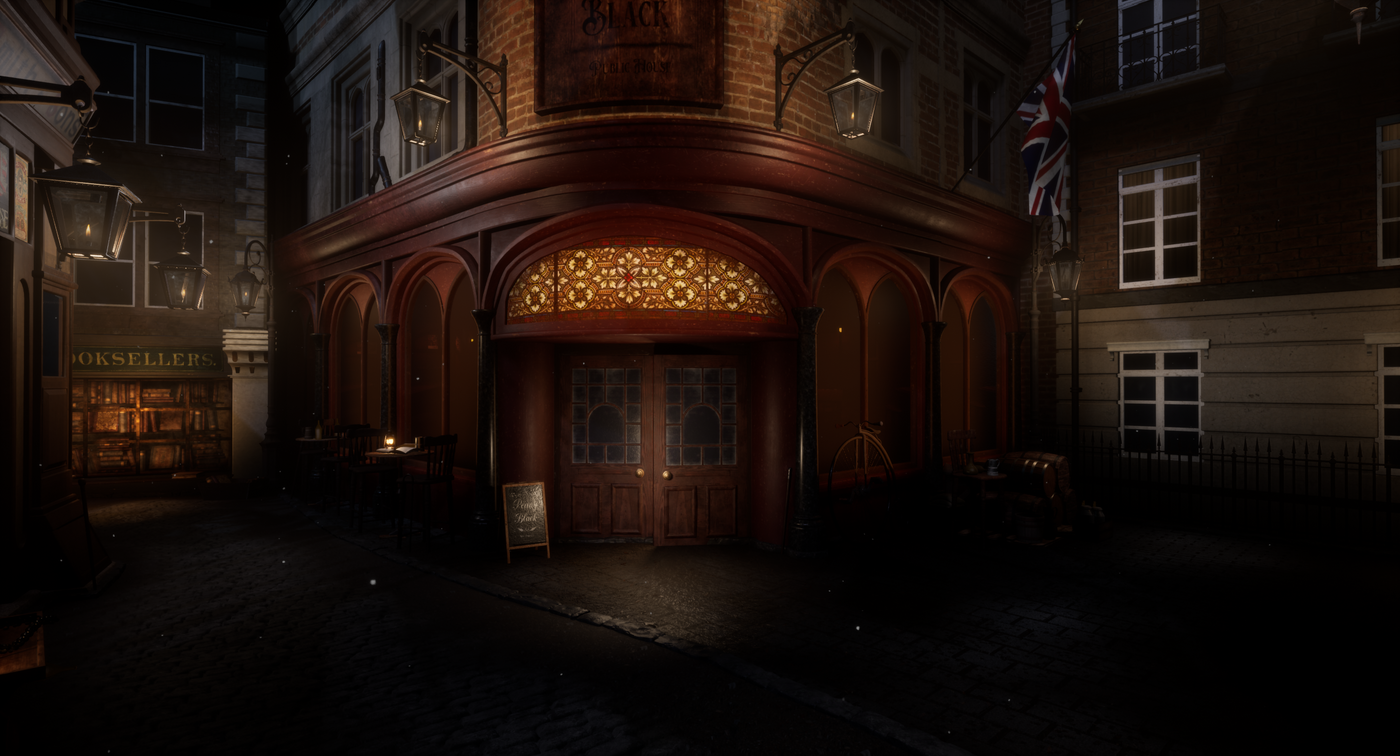 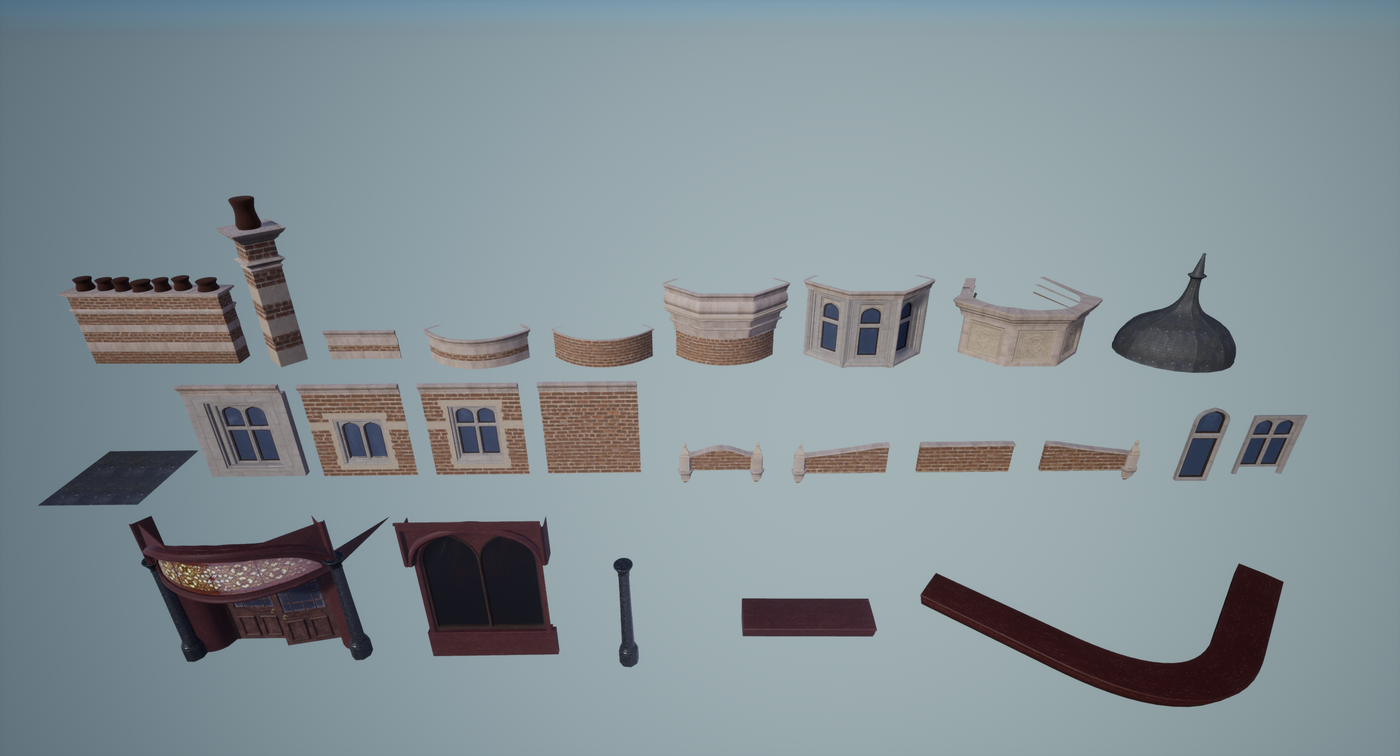 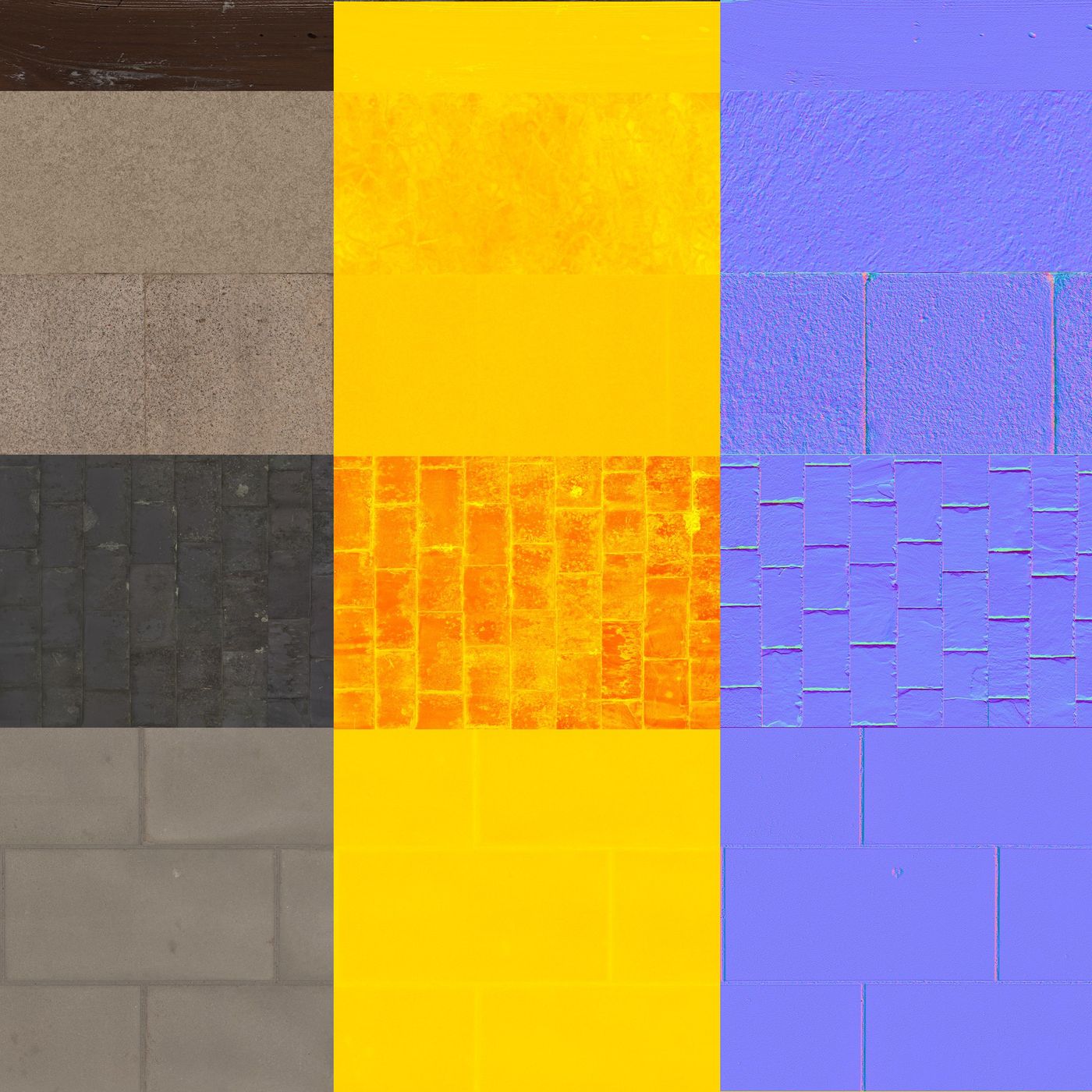 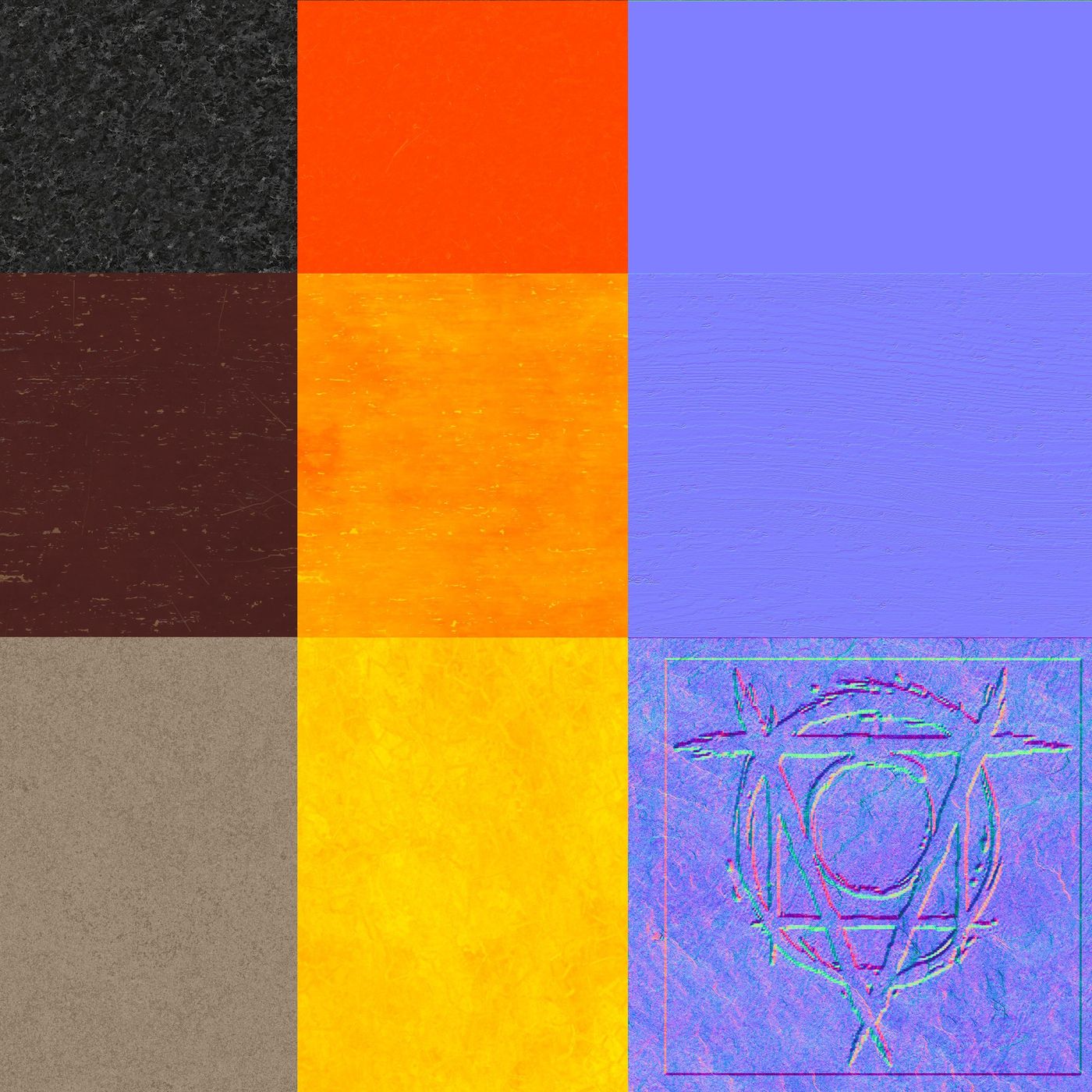 Using a cubemap which I created from an old project, I made an interior mapping shader to give the illusion of depth to the ground floor windows.

Below is a selection of props that I created to set dress the level, including a set of Modular Pipes. 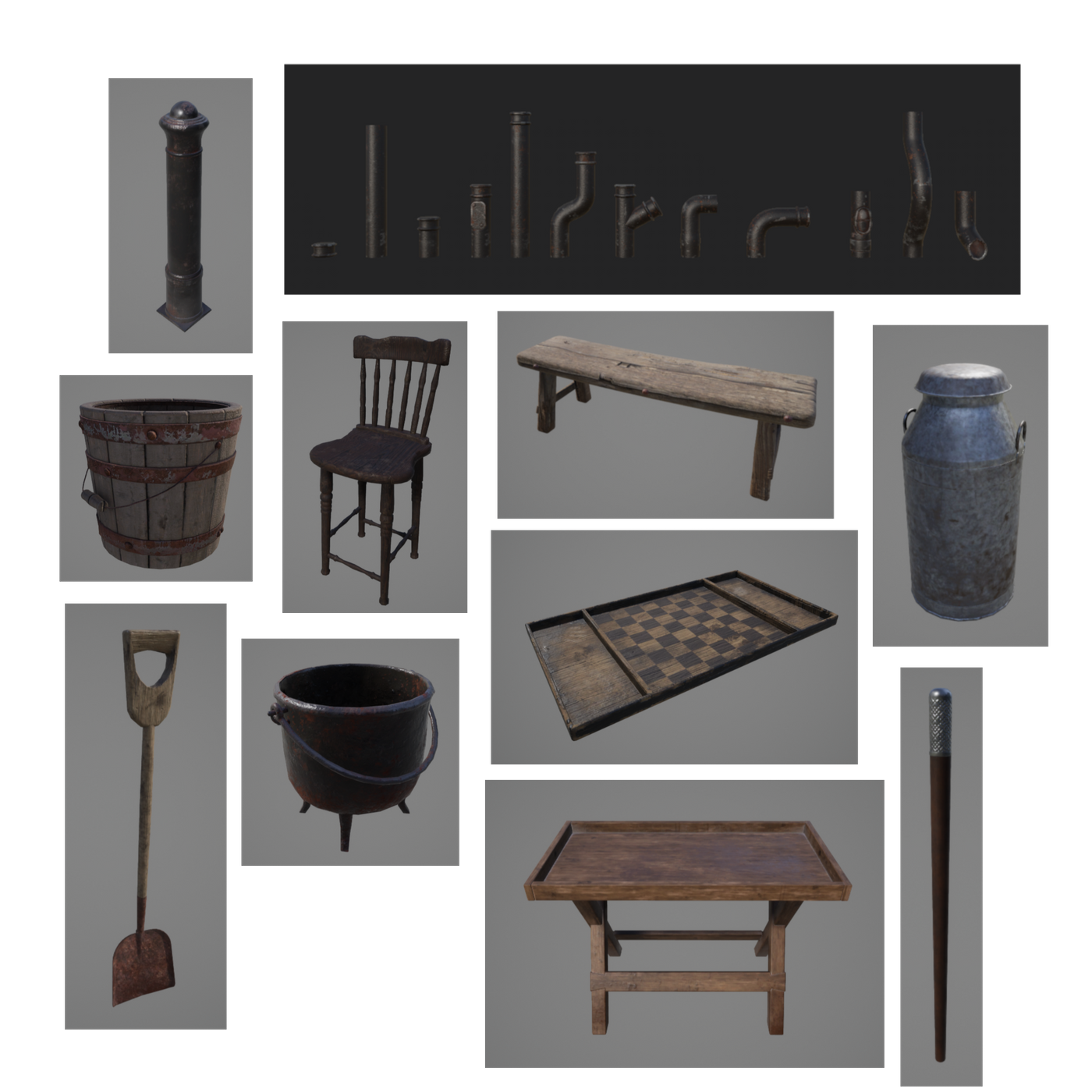 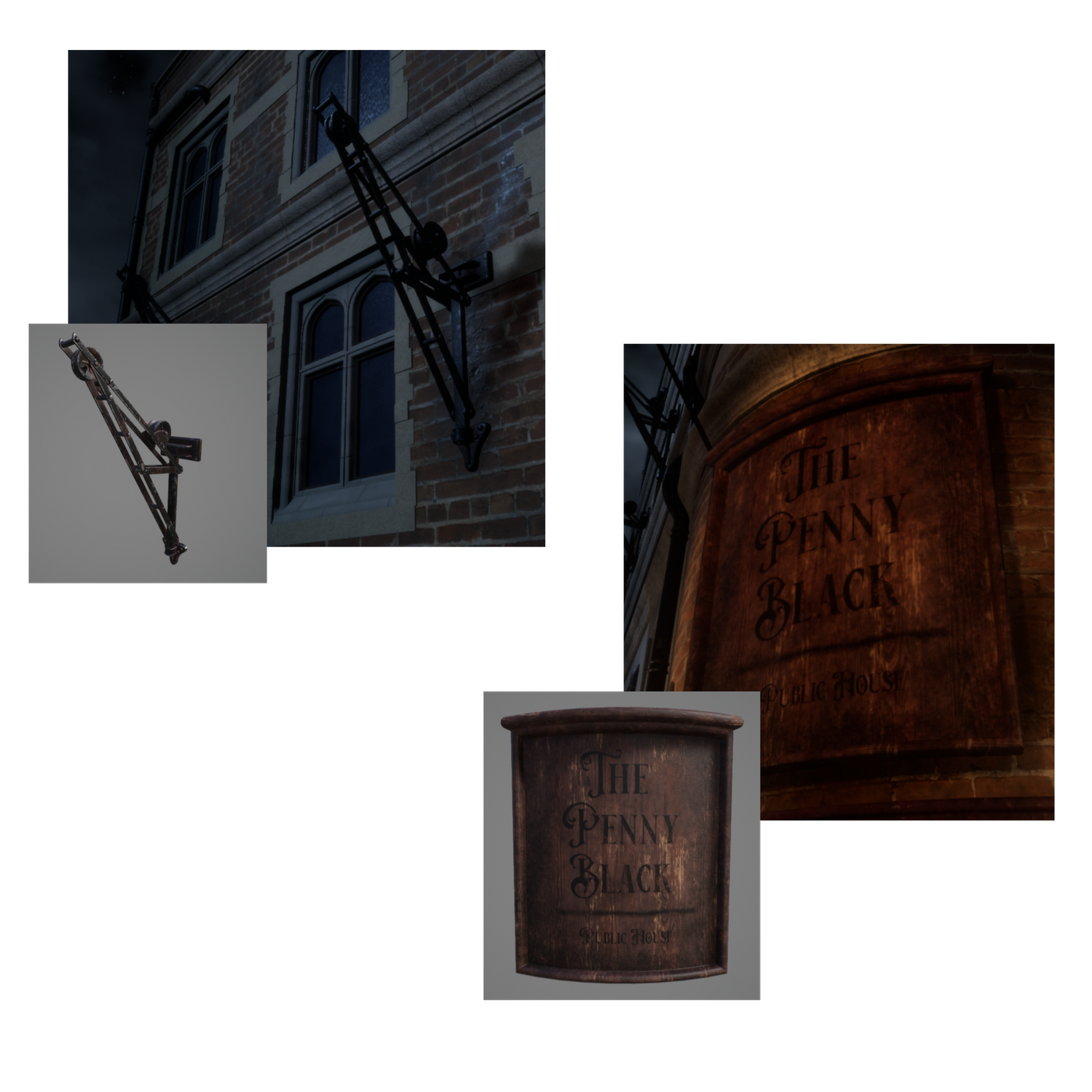 This Diorama was an individual project and takes inspiration from Dwarven fantasy such as the Hobbit and LOTR; with games in mind such as The Witcher 3 and Skyrim. It is built around the narrative of an ancient lost throne room in a castle on top of a basalt mountain. I aimed to give the sense that the piece is alluding to a much larger world around it. 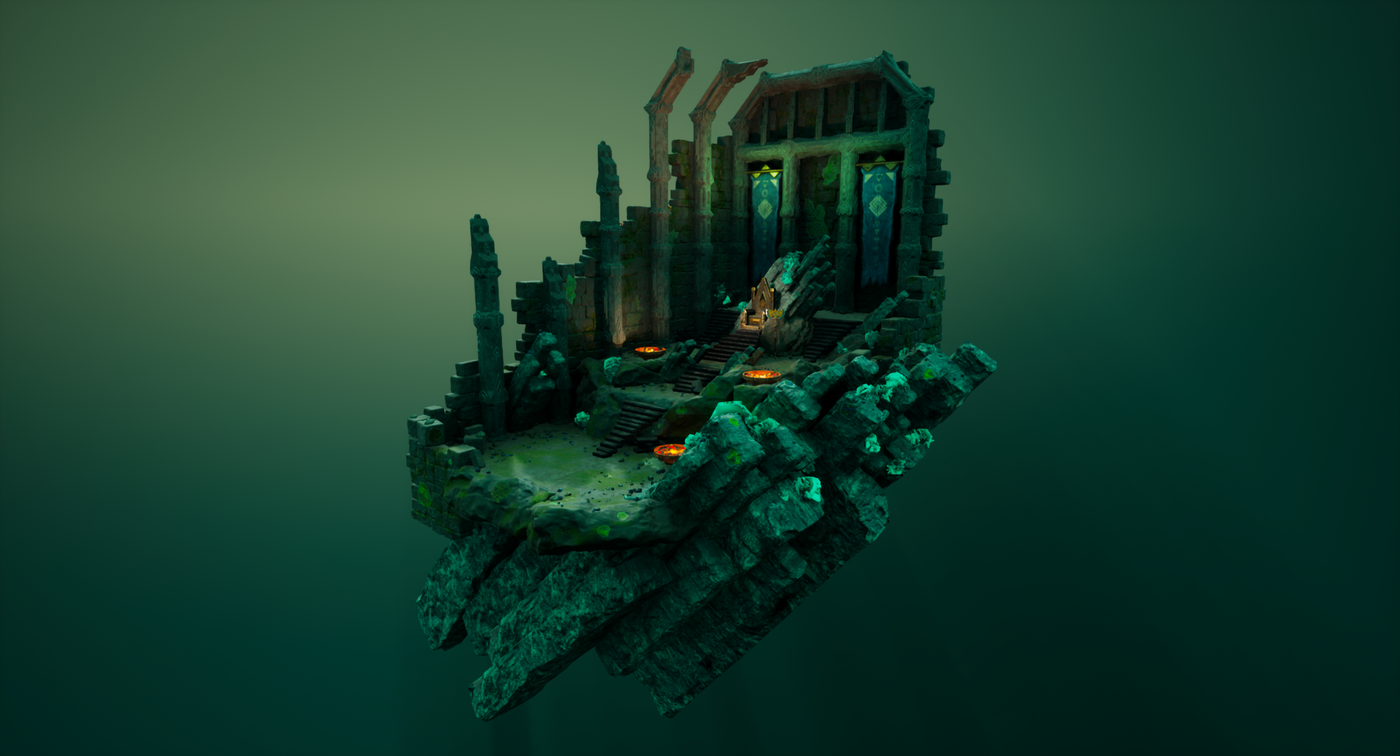 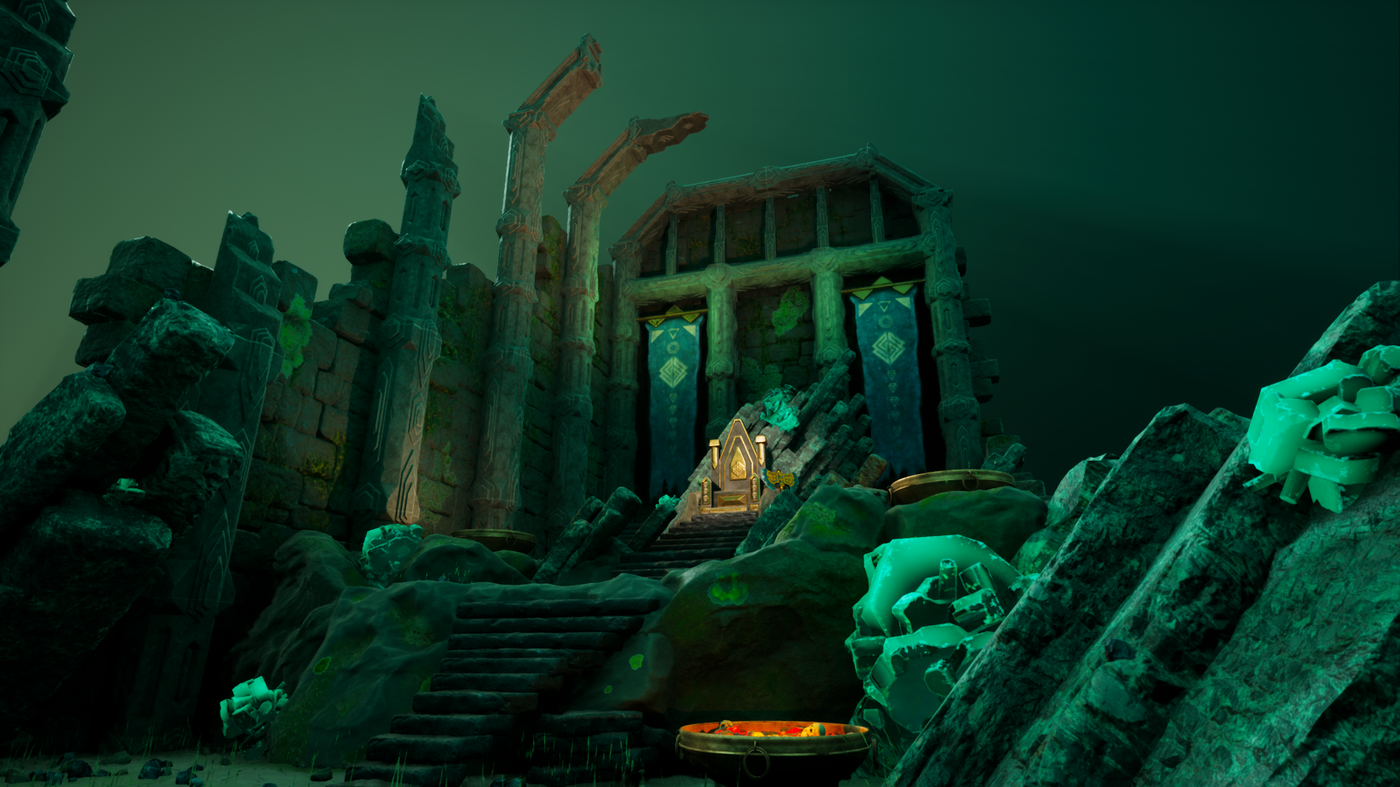 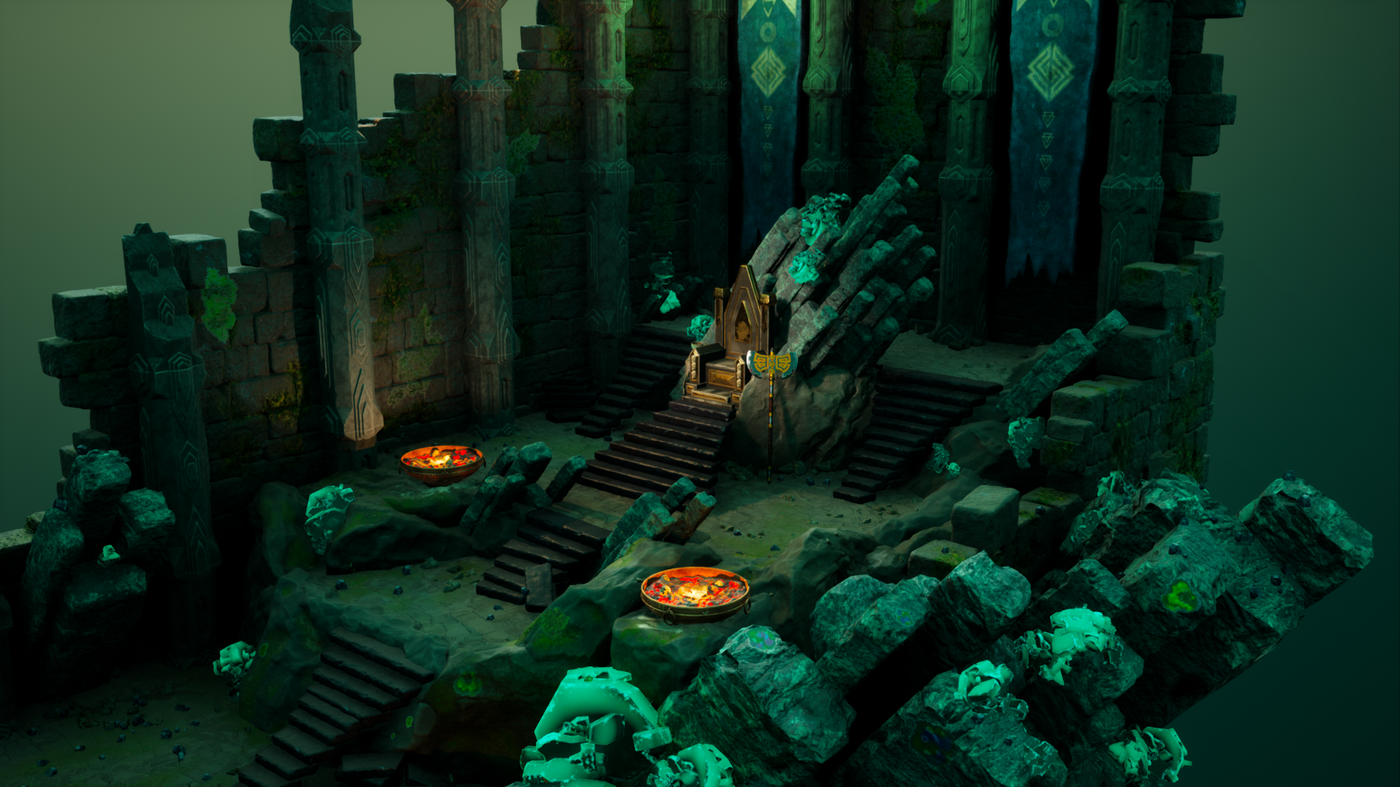 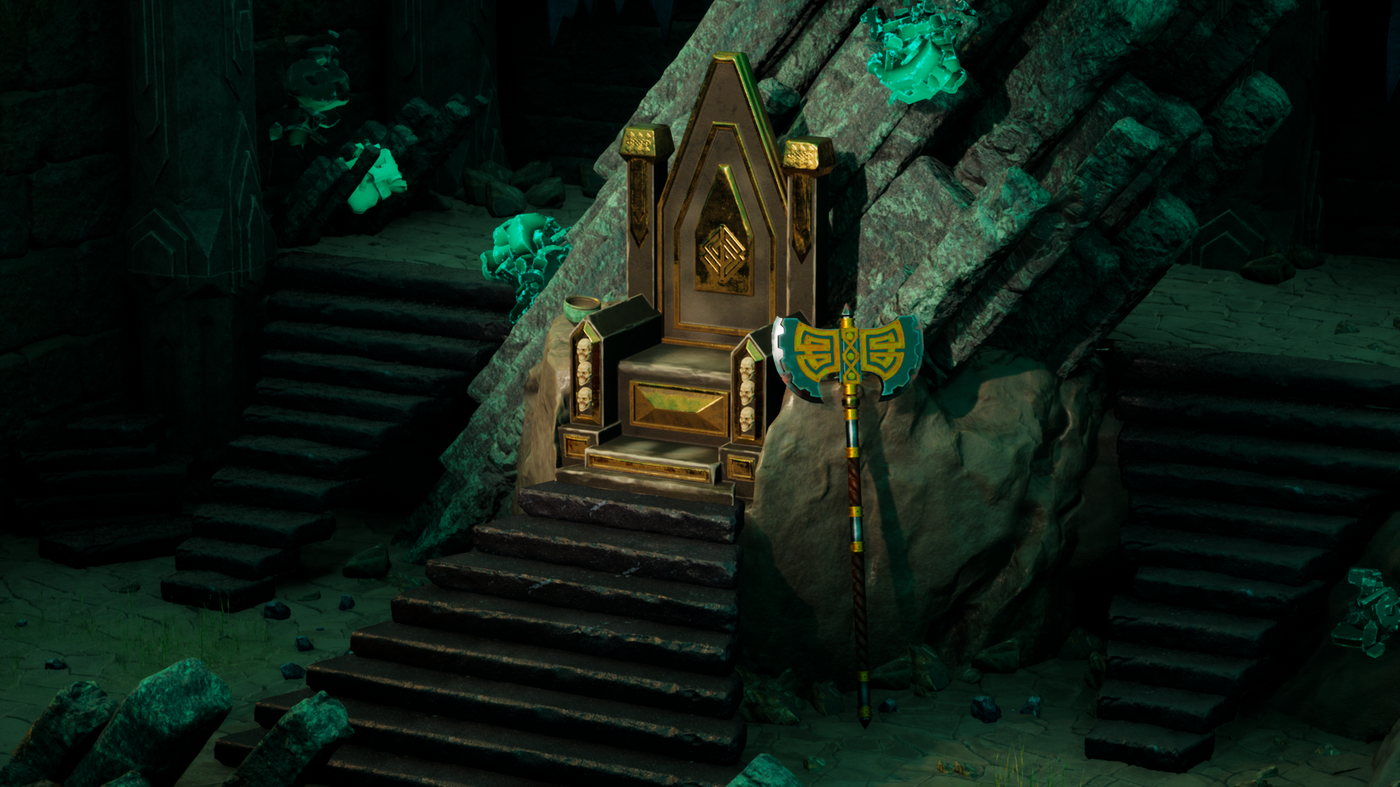 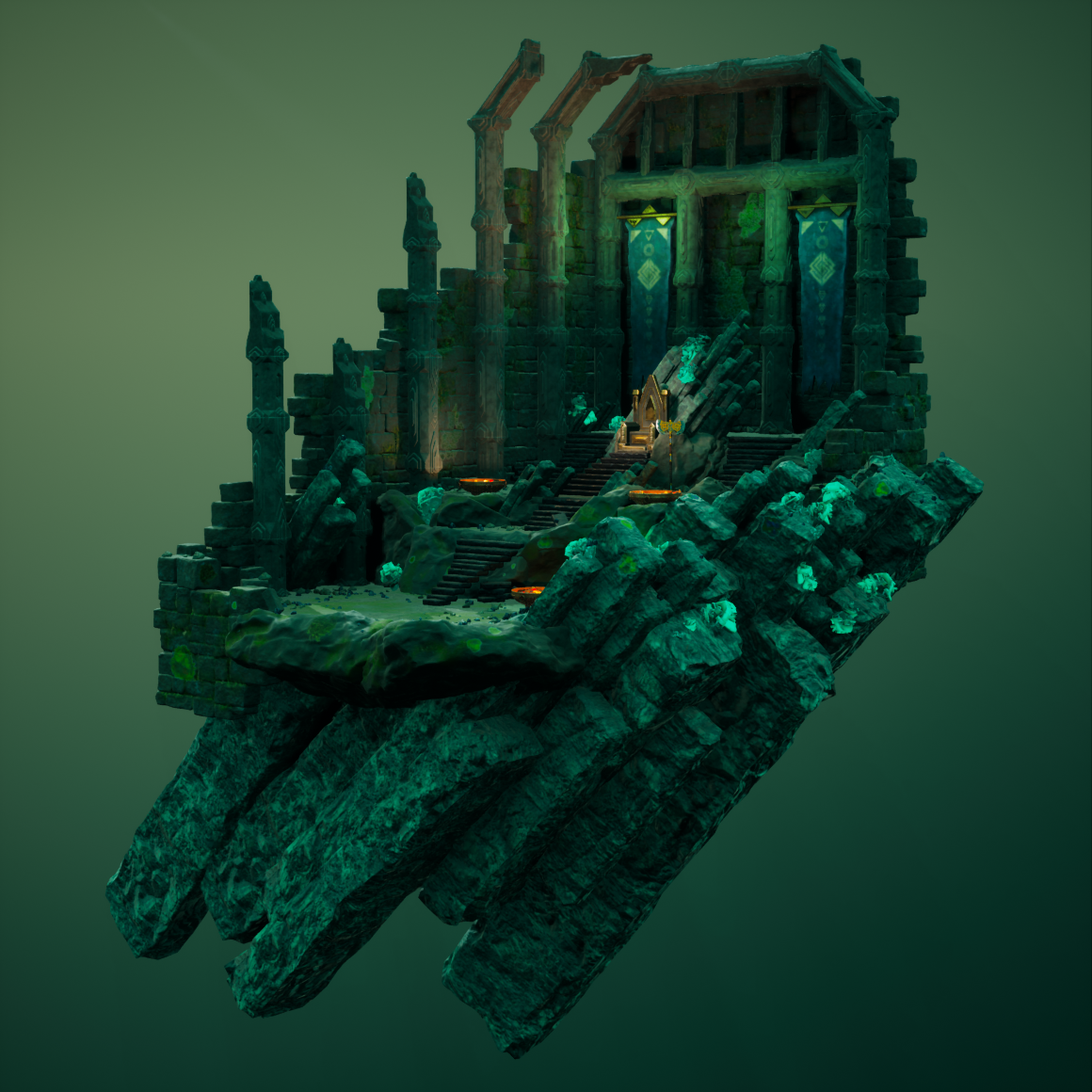 A main focus of this project was around the process of baking. I created a set of modular columns, rocks, steps, and walls which were all sculpted in z brush and baked down to a low poly version.

I wanted the lighting to reflect the idea that this place is otherworldly, emphasizing greens and blues and contrasting that with the oranges and yellows in the gold/fires.

Tesselation was used for the flooring and vertex painting along with decals were used to create the mossy effect on the walls. The foliage tool in UE4 was also utilised to scatter crystals, debris and grass in certain areas of the diorama.

It took a lot of iterating to get the block-out stage to a point I was happy with: 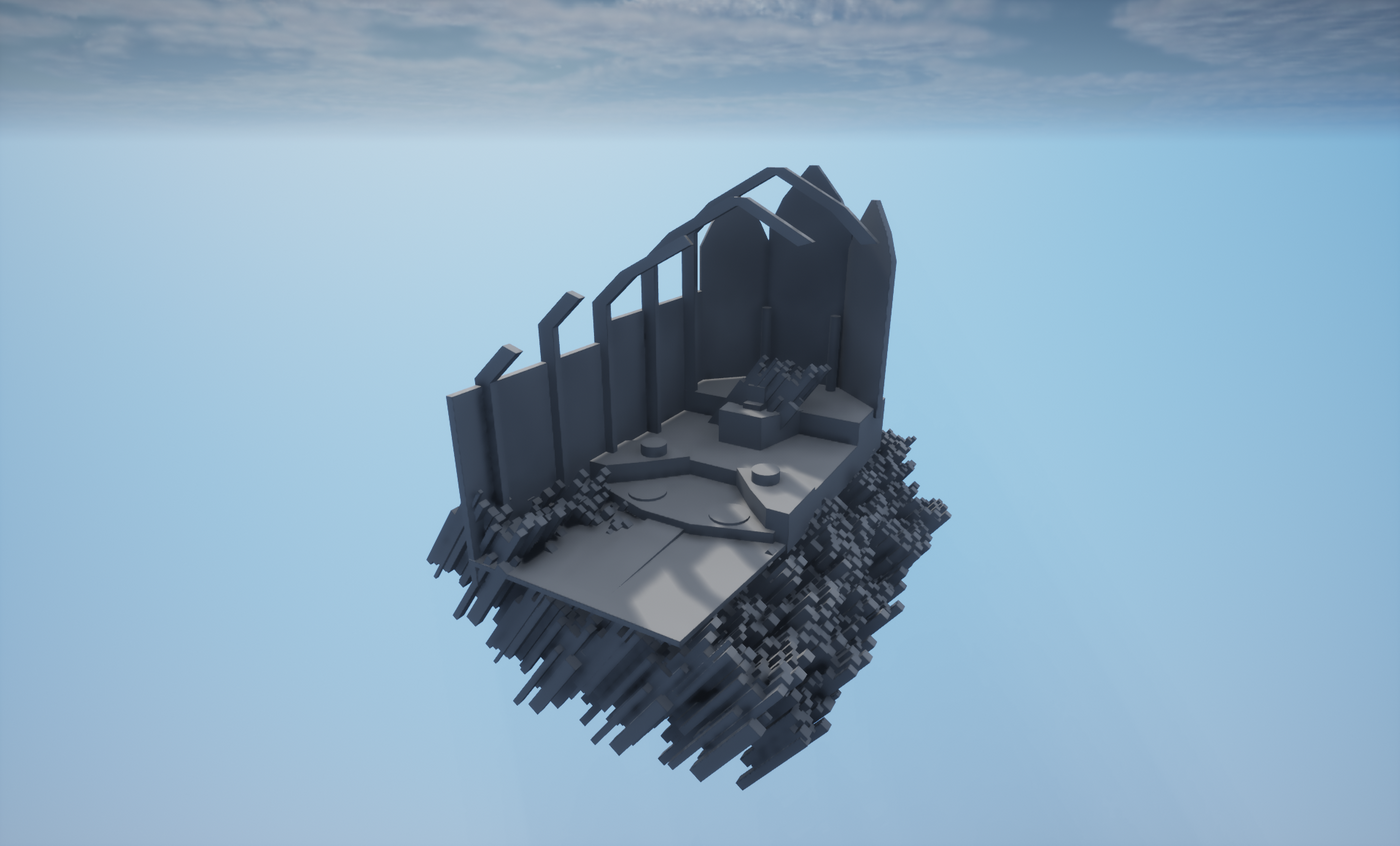 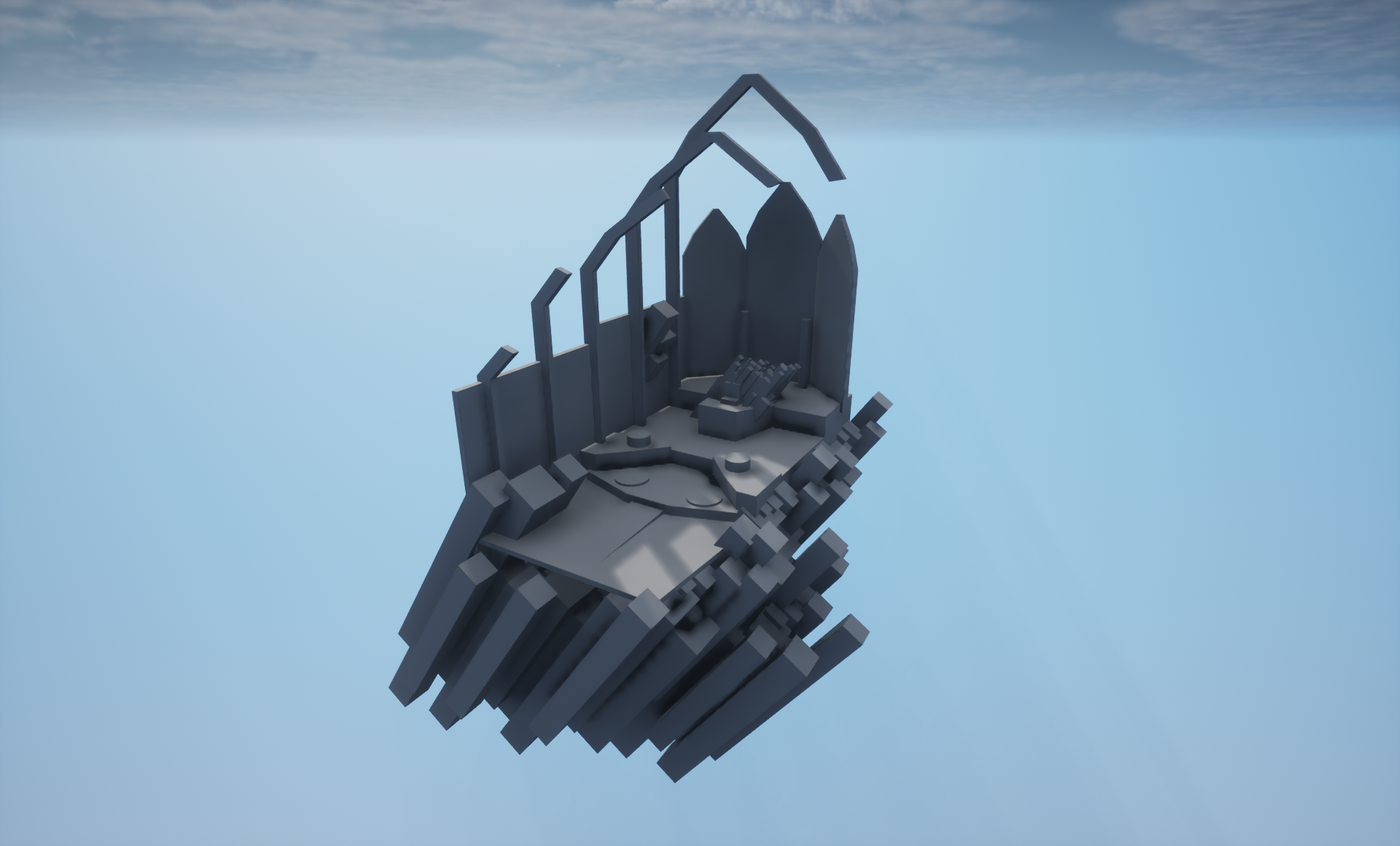 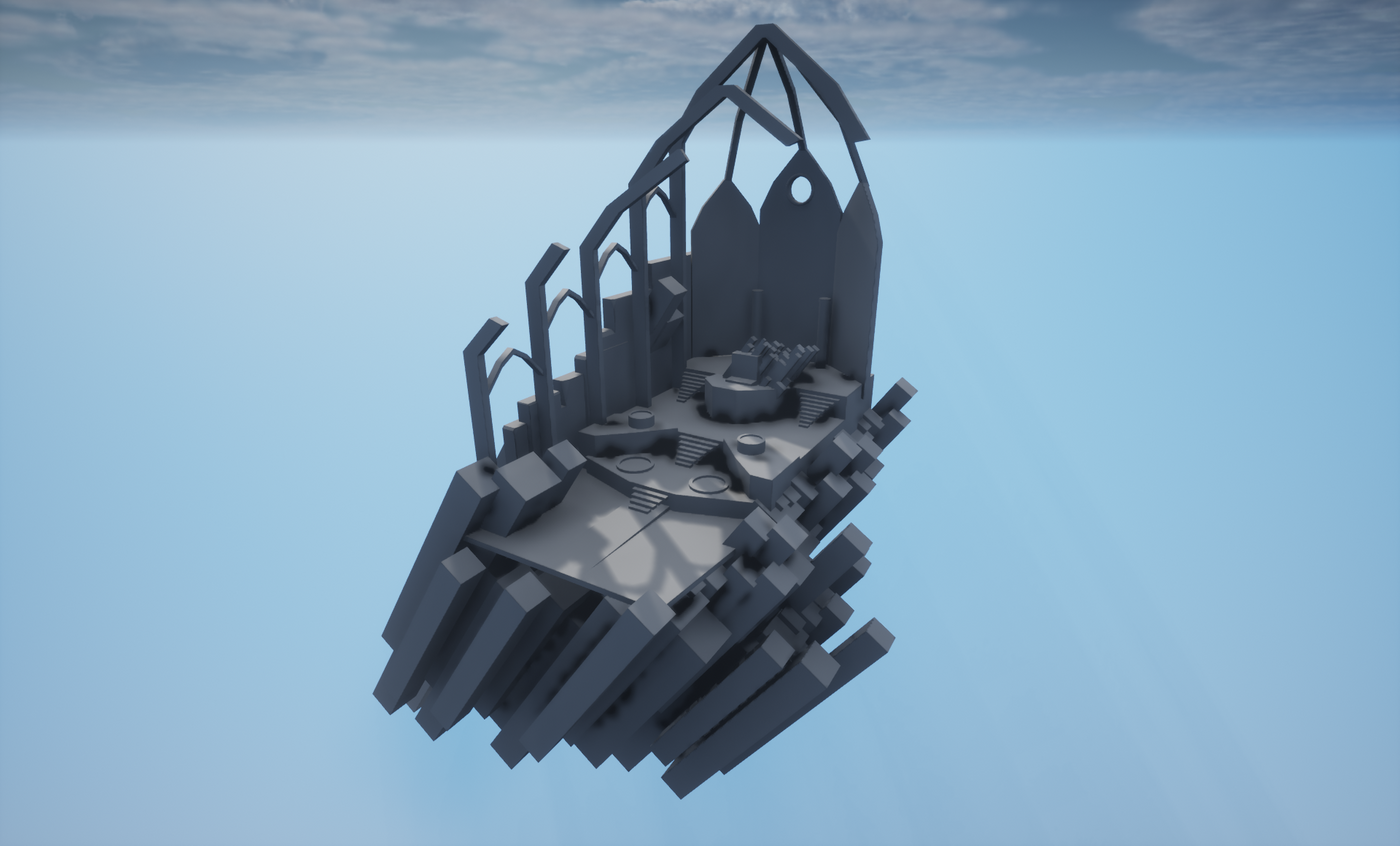 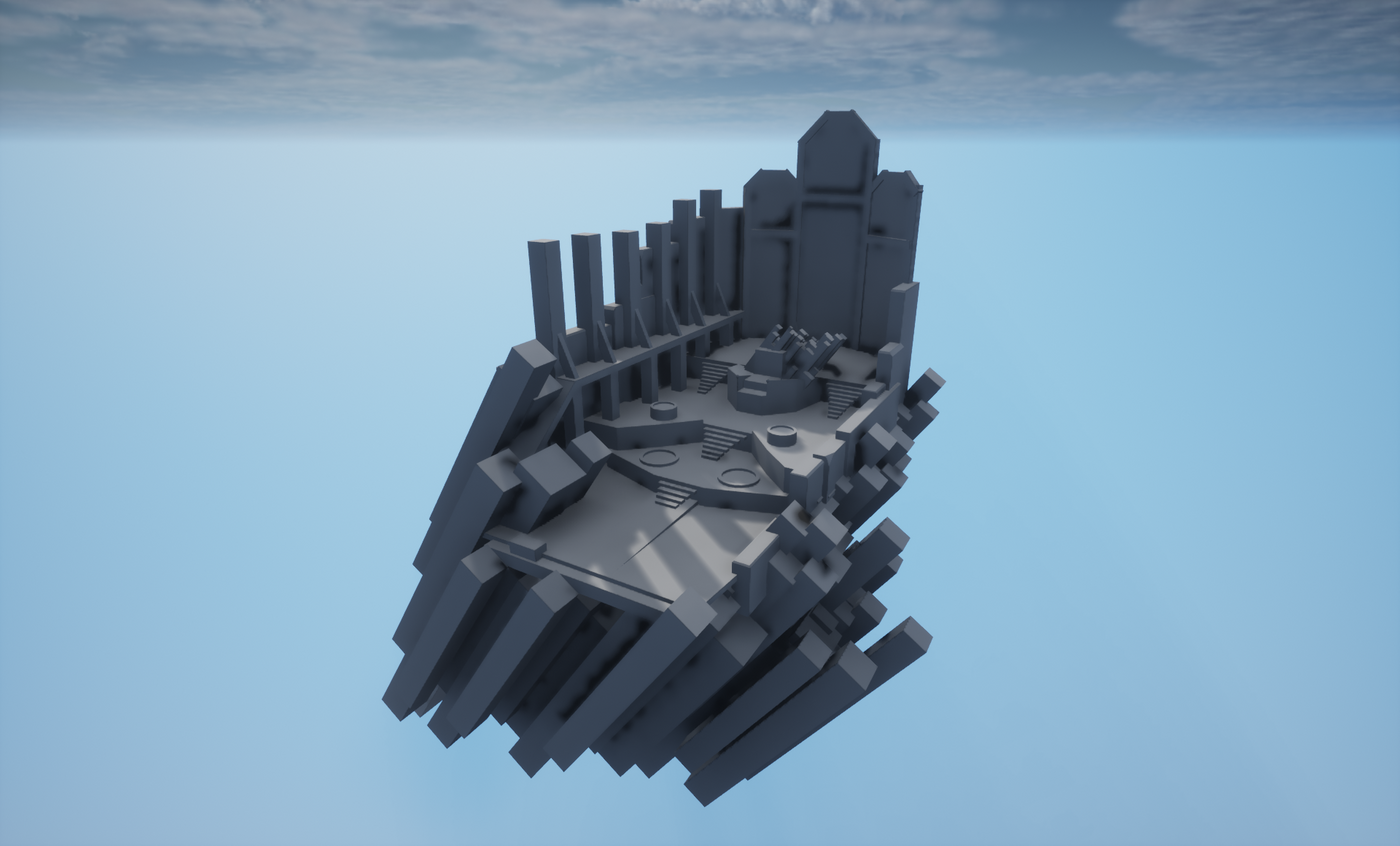 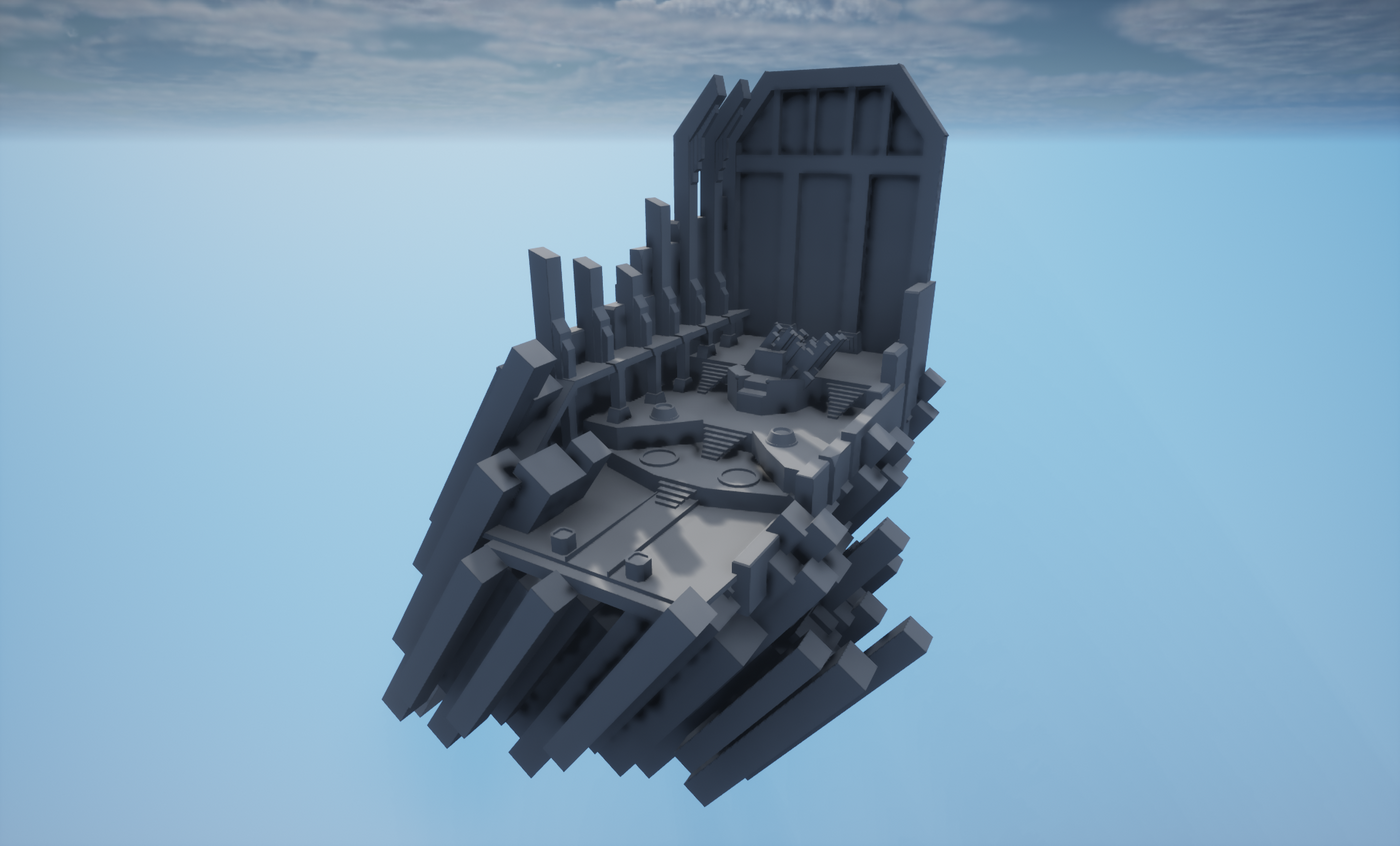 In retrospect I think I could have been more specific with my art style in creating this diorama as there are various different forms of dwarven architecture throughout fantasy concepts.

In a Victorian manor, a ghostly presence haunts her old study, possessing her childhood doll.

This was an individual project which focused around vfx elements and cinematography. The short video was created in UE4 using sequencer and aims to showcase vfx elements as well as cinematic capabilities within the engine. I wanted to create a ghost story and took inspiration from horror films such as The Lighthouse, Annabelle, and The Haunting of Hill House TV series.

The base scene was downloaded from Unreal Marketplace - 'Victorian Interior Environment' - and then relit and set dressing tweaked to fit the atmosphere and mood of the project. I created the lighting, the vfx elements in the scene using a combination of shaders and Niagara and experimented with many iterations of the camera work to get the final result.

I enjoyed taking a more cinematic approach to the use of Unreal Engine, working with lights and cameras within sequencer through the lens of cinematography. I wanted each shot to have a clear and deliberate intention that contributed meaningfully to the piece as a whole.