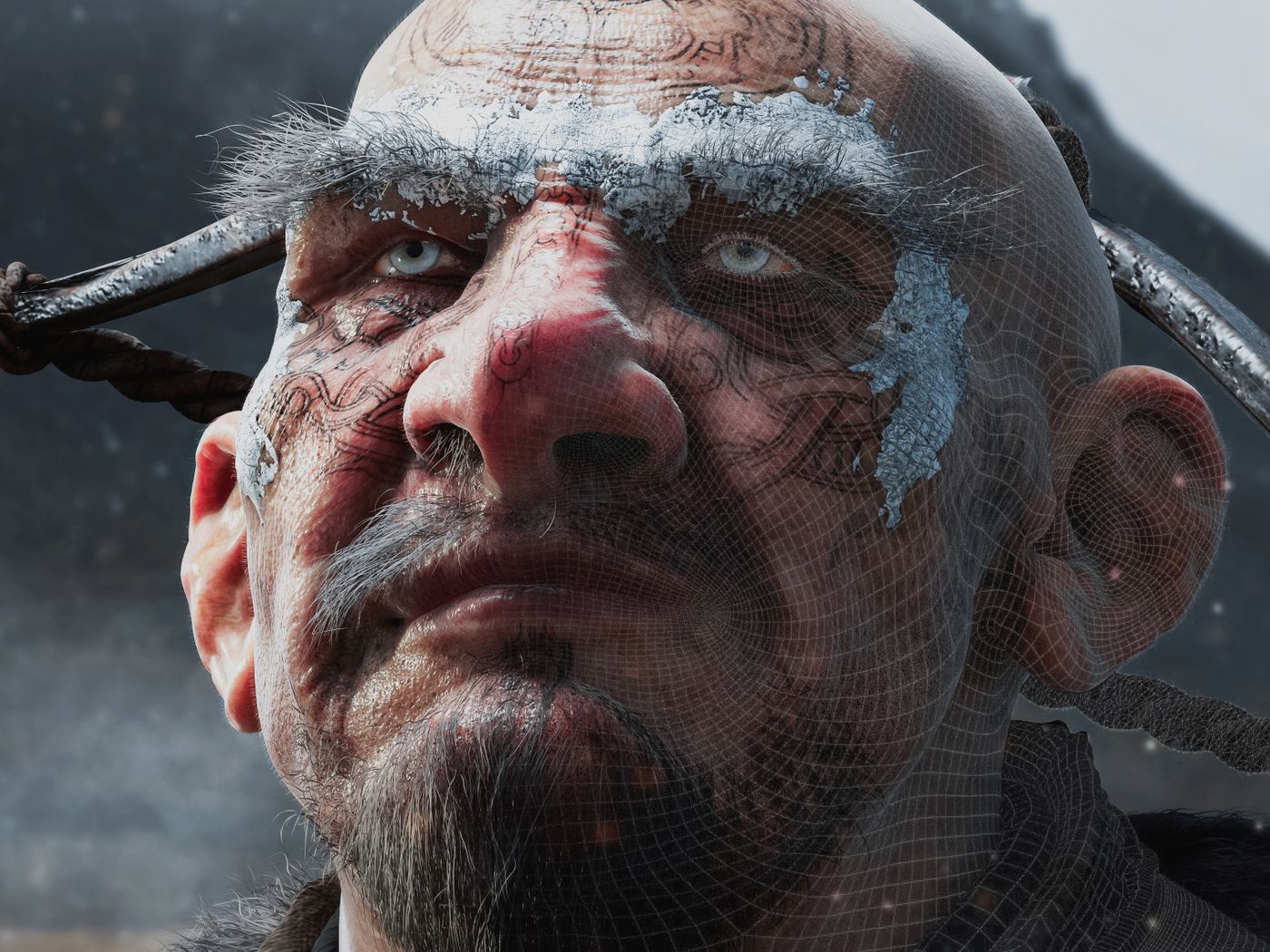 I got into Gothic Horror recently and I wanted to combine 'The Lord of the Rings' with my guilty pleasure movie 'Van Helsing.' So, why not make the character a pagan dwarf from the land of giants (Jötunheimr)... With a frost monkey and a crossbow.

I really enjoyed the process of creating this character from scratch. I learned a lot of ways to organize my workflow for faster and more efficient ways of rendering. Below is the entire process it took to achieve this final image.

I found that it was very important for me to capture the black and white value pass for the overall render. I wanted to make sure there was a nice distribution of black to whites. Here is a studio set up based in a side by side comparison without an HDRI Sky map. When rendering, I try not to use AOV's when I don't have to, as I much prefer achieving the entire render in Arnold directly. I do this in order to be able to adapt to various HDRI studio setups without relying on AOV passes to increase either the specularity, saturation or shadows. 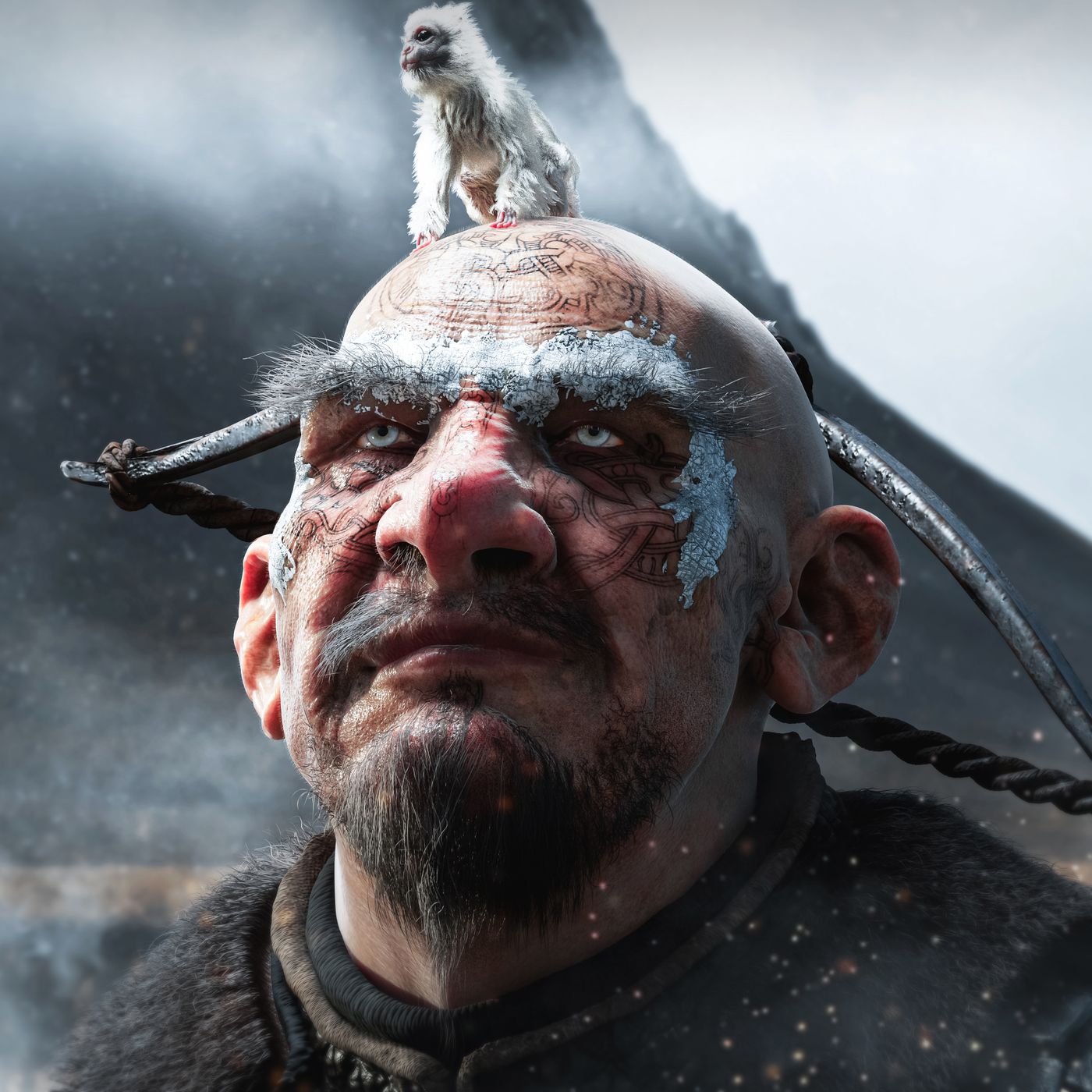 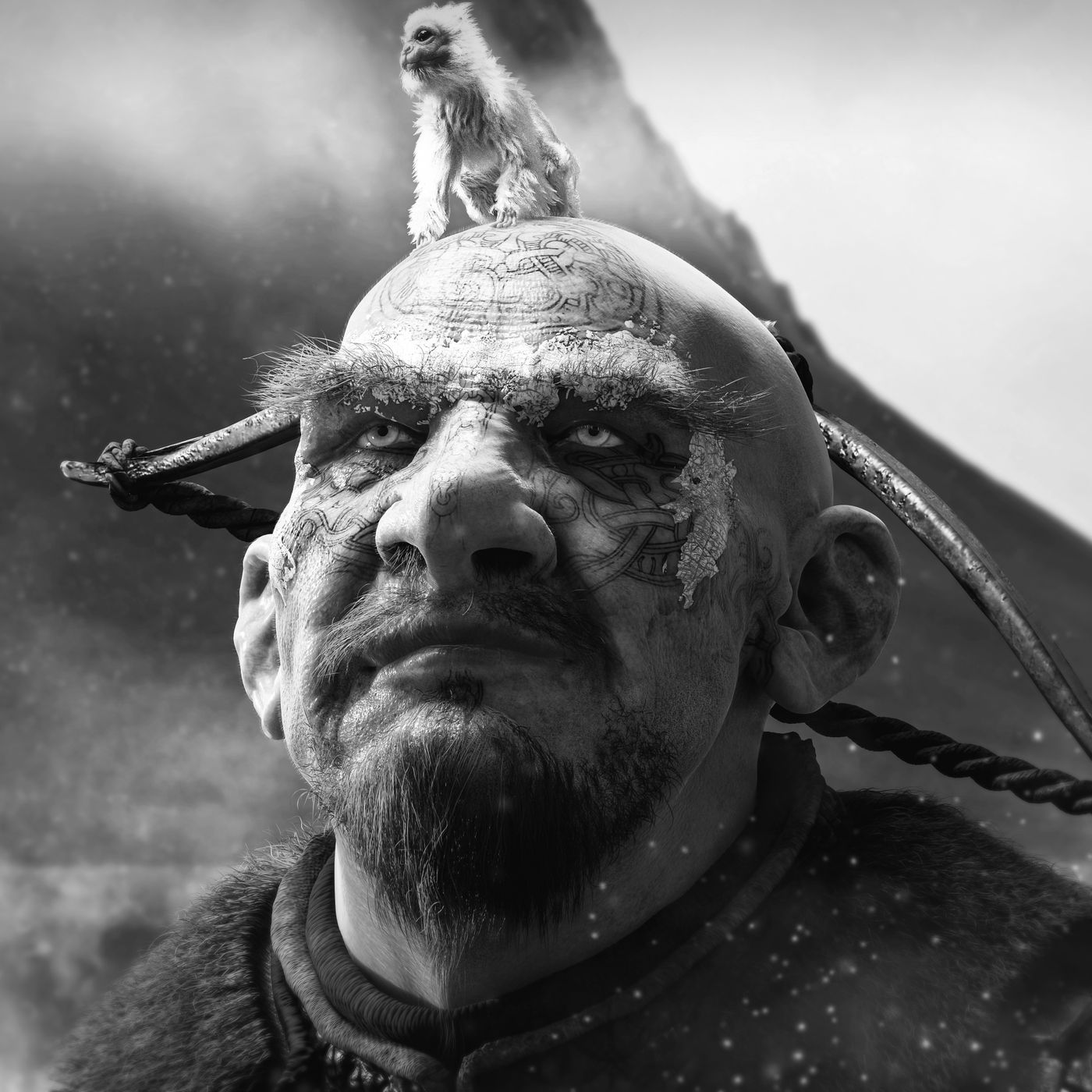 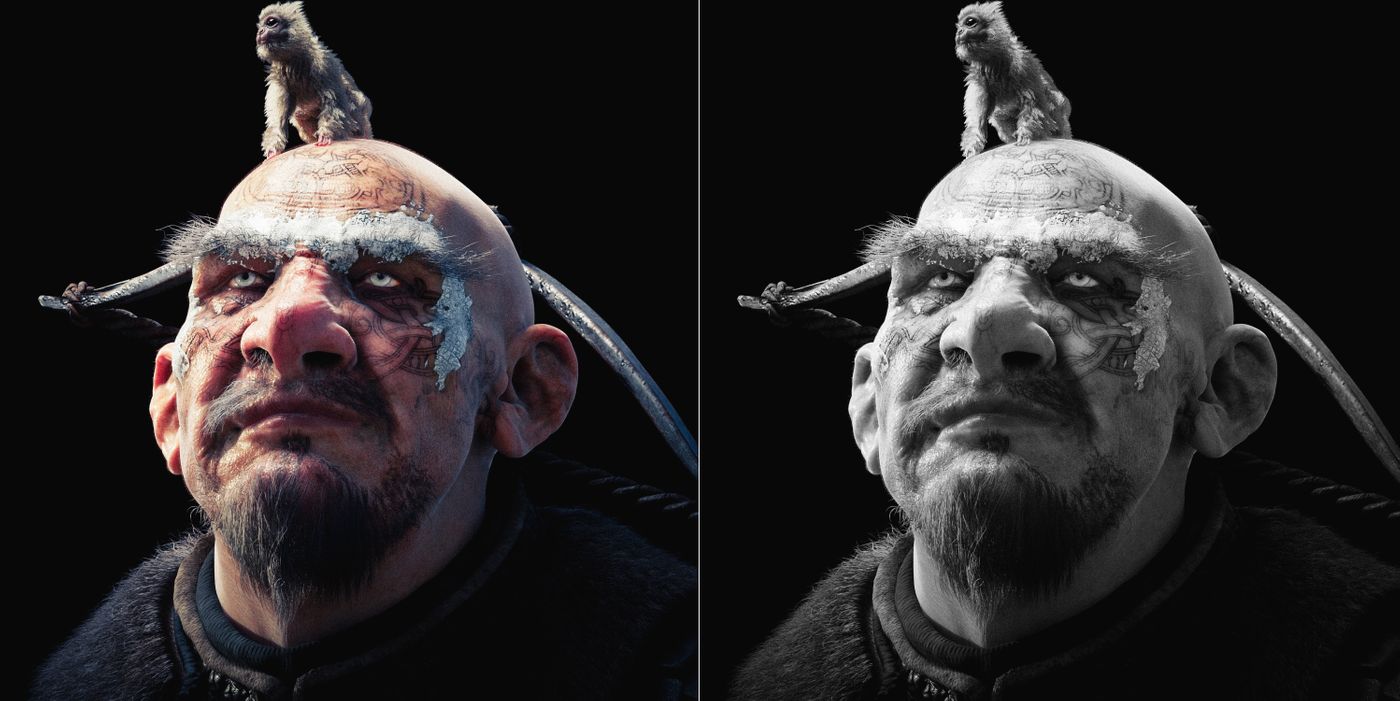 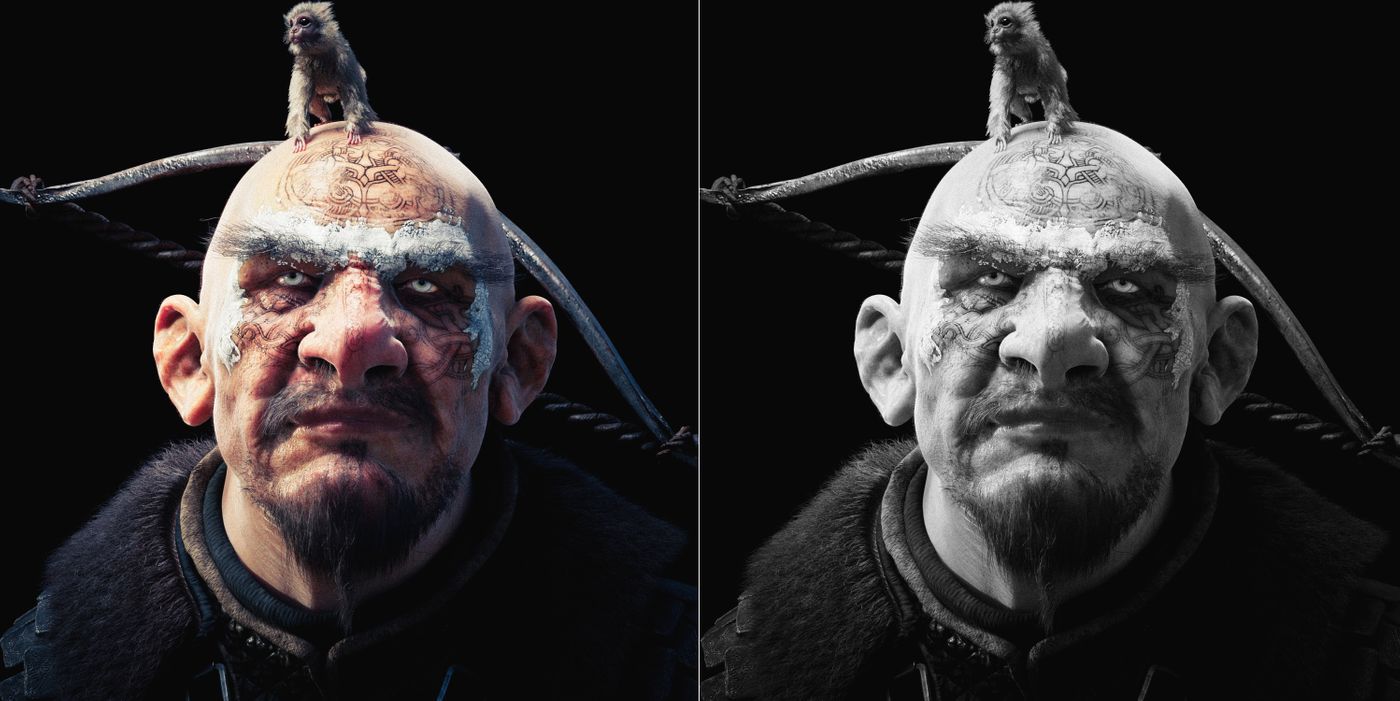 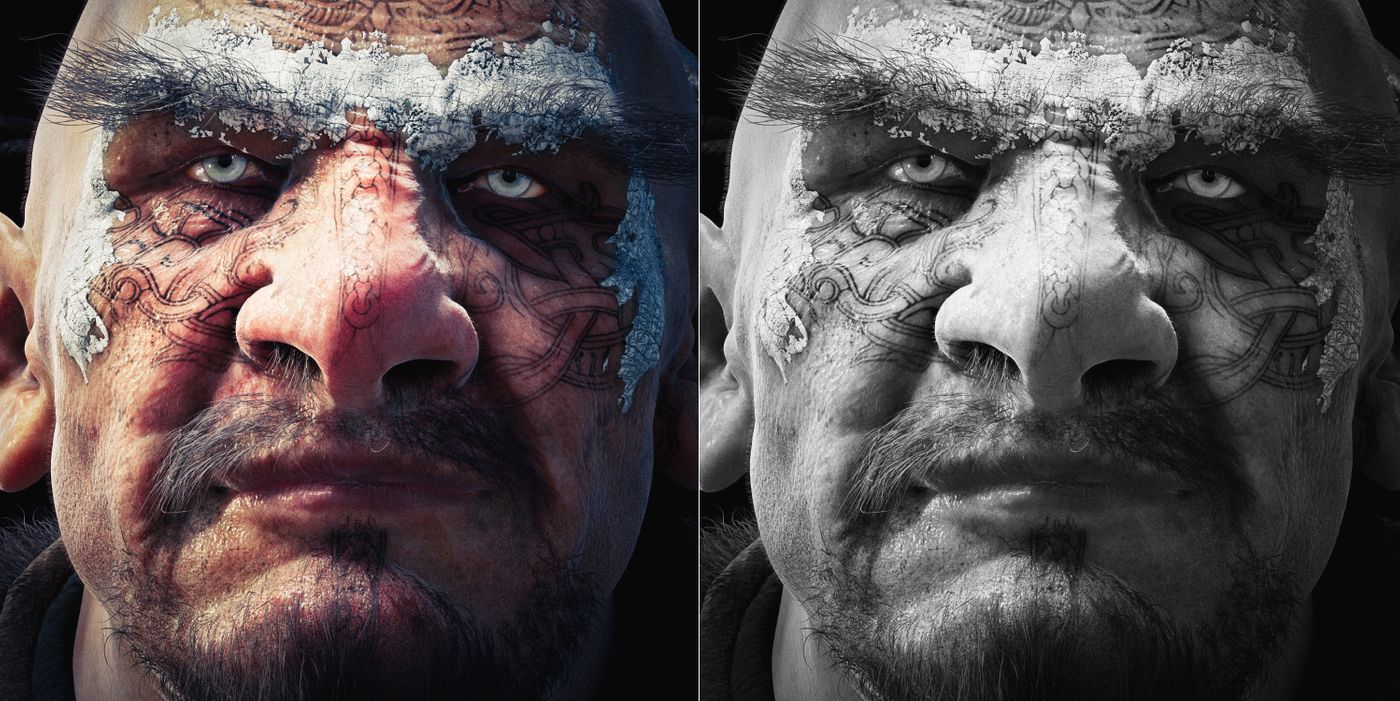 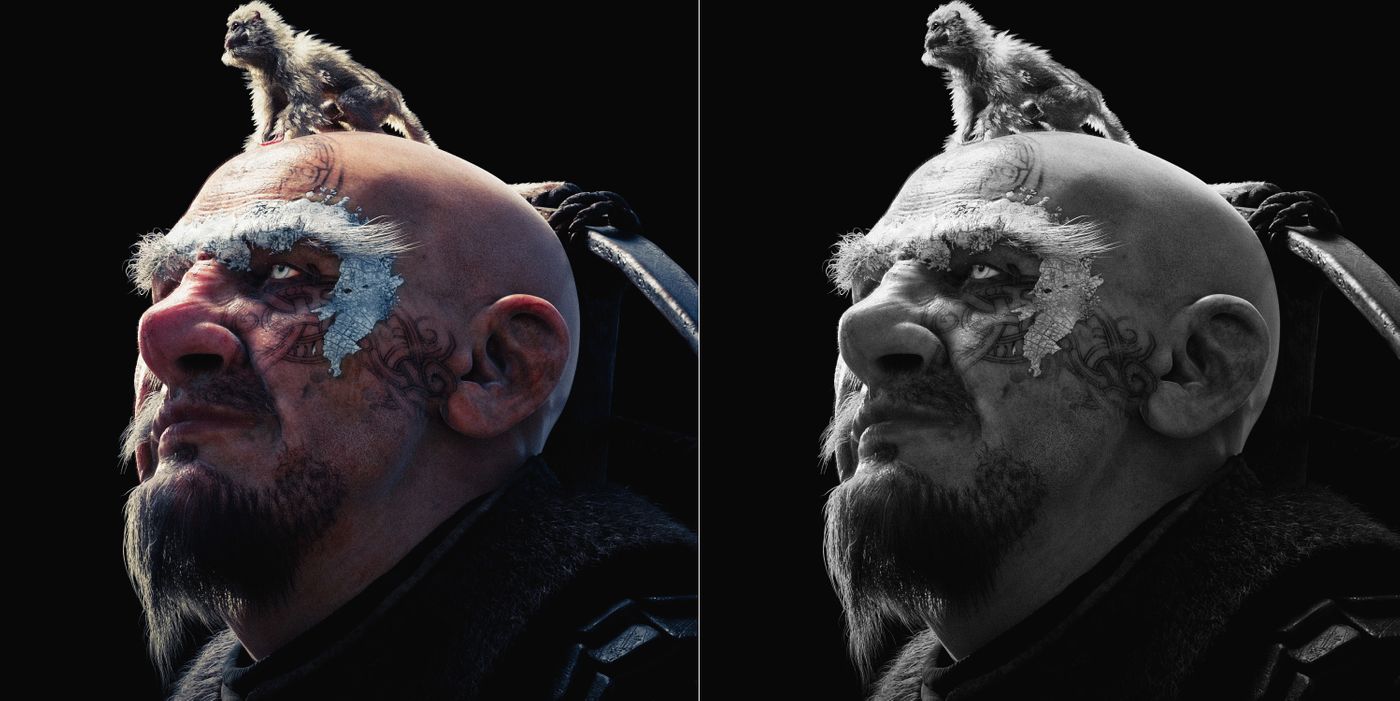 Since I used HD geometry in ZBrush, I wanted to capture as much detail as possible in the final render. Using Subsurface Scattering tends to mute the details on the pores, so in order to capture those details while using subtle SSS effects, I used 4 UDIMS for the head alone set at 4k resolution for each texture map. My SSS was dialed in at around 0.125 at real world scale. This was the perfect amount to blend the SSS layer with the skin. 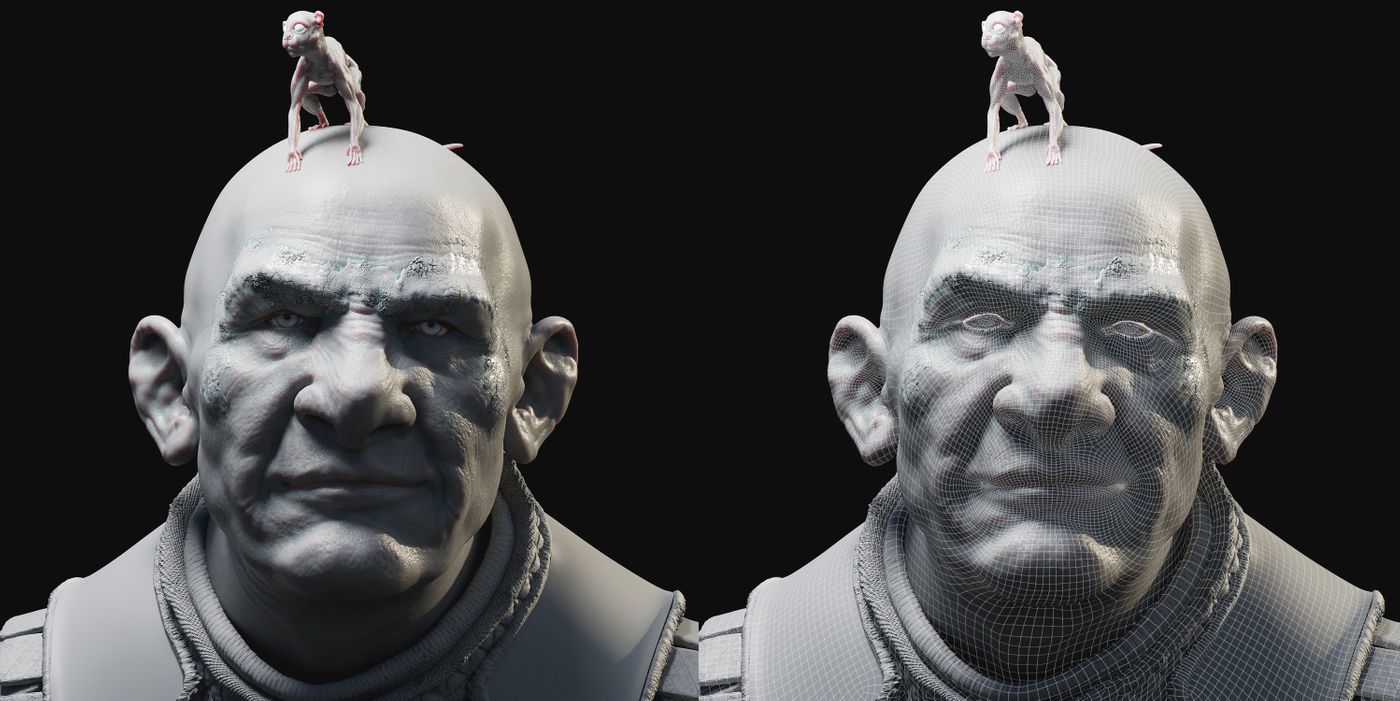 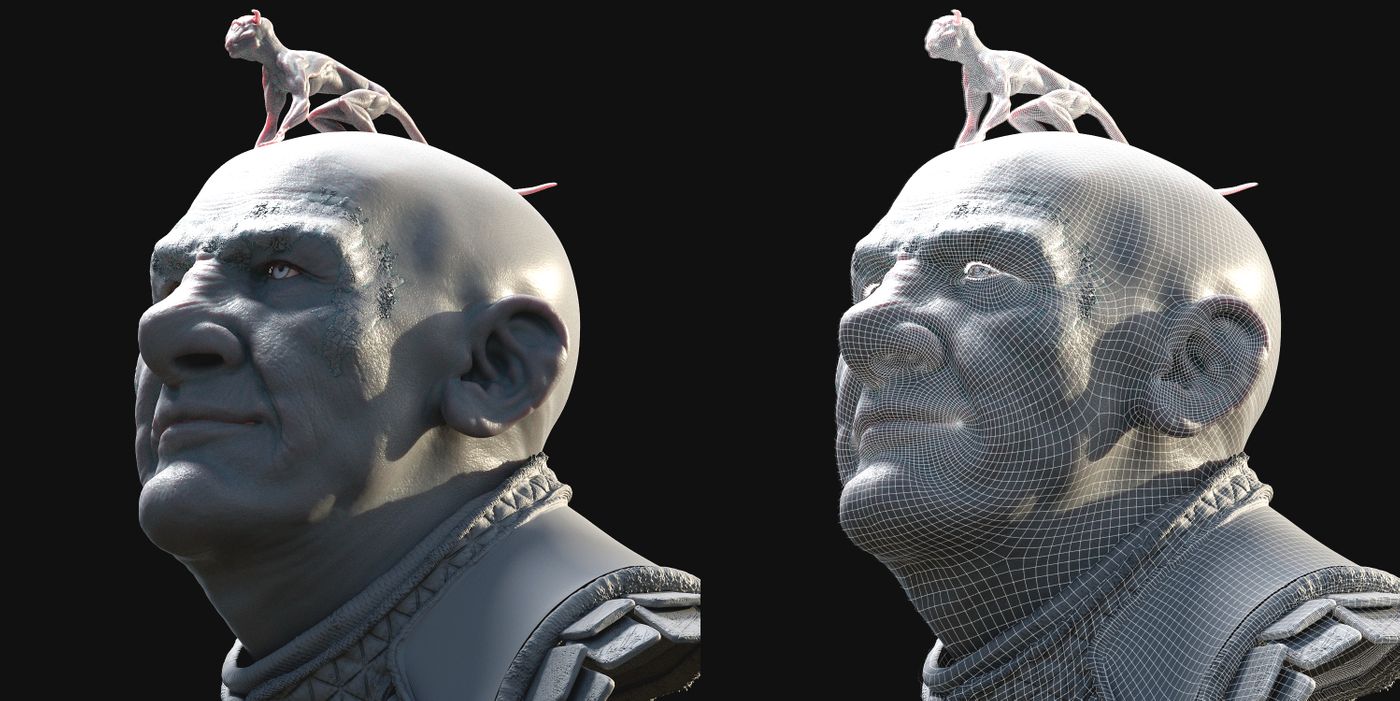 During the process of refining the character, I tried to push the Nordic feel by starting with small scale test renders of the skin alone, then I started adding tattoo's across the face, brightening the exposure of the skin and changing the eye colour to match. Finally, with more refinements on the eyes, I darkened the iris colour and added face paint onto the model with geometry created in ZBrush. 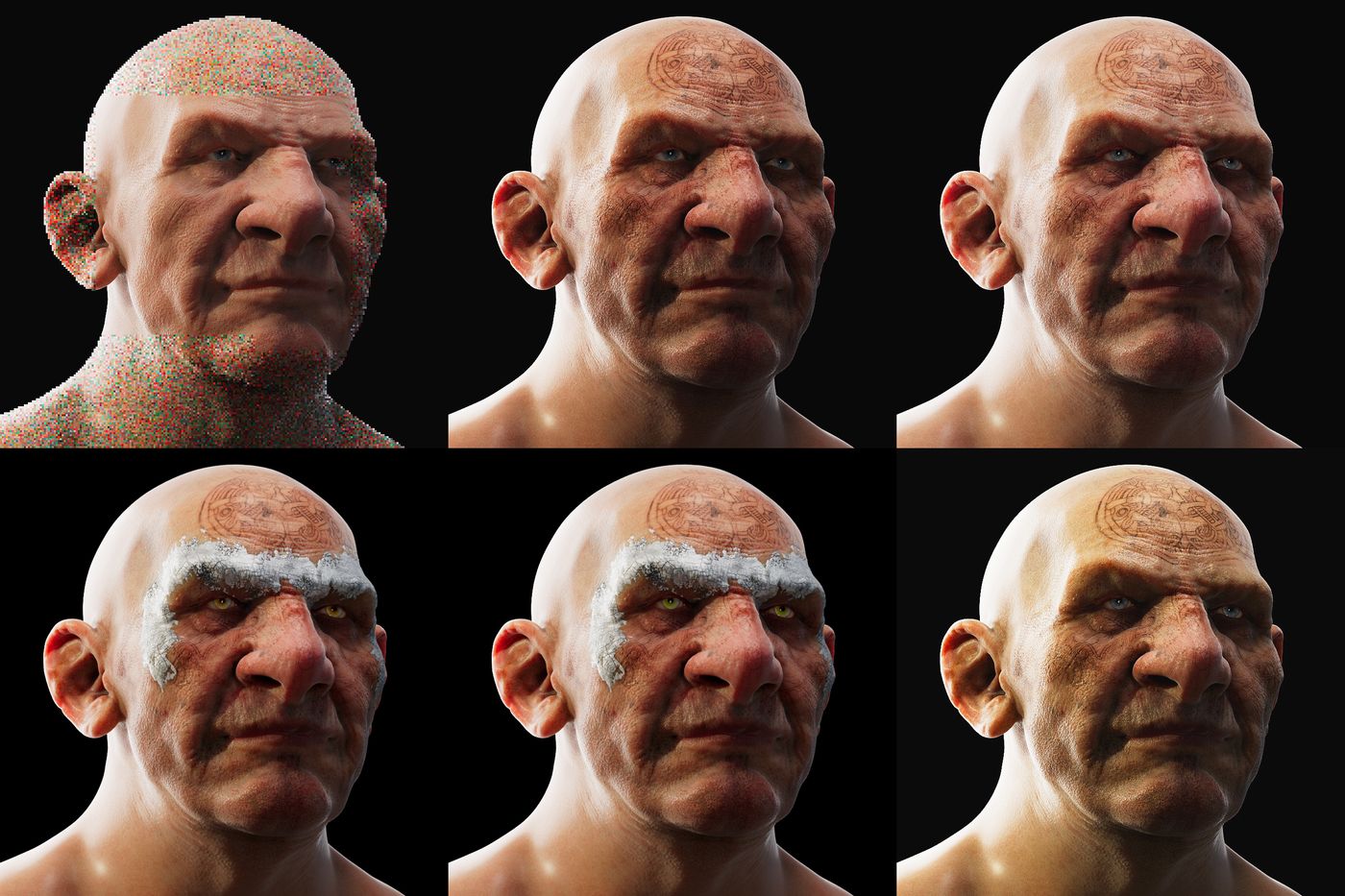 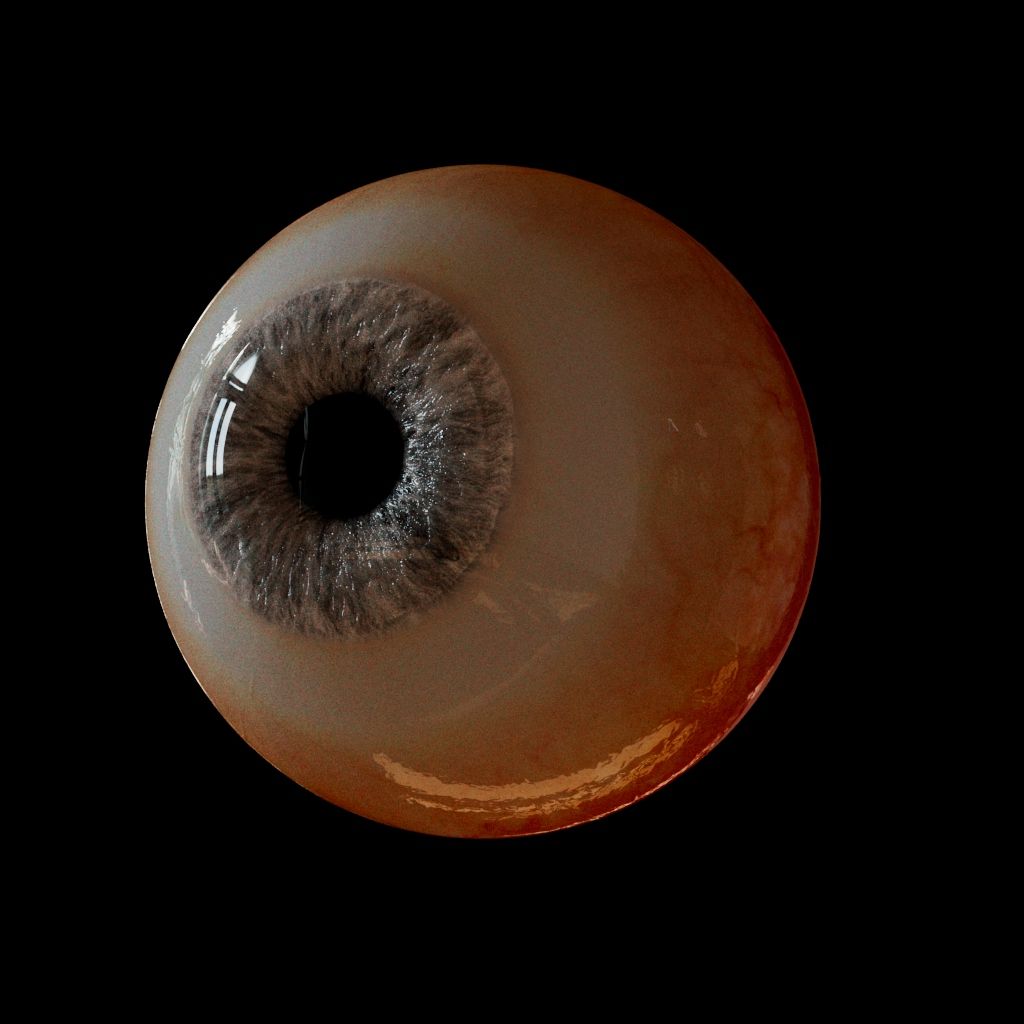 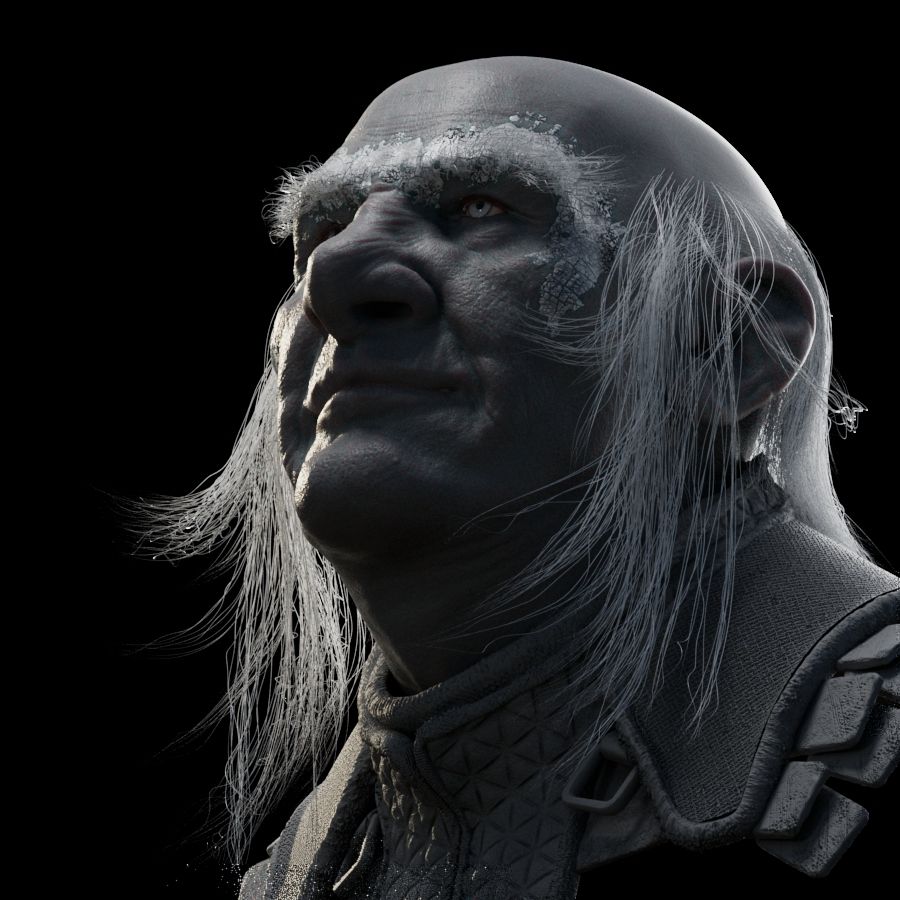 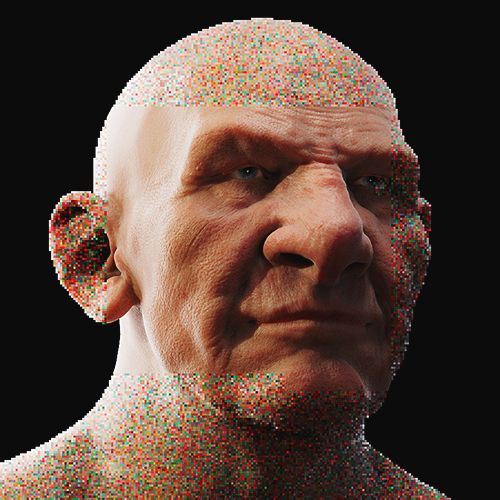 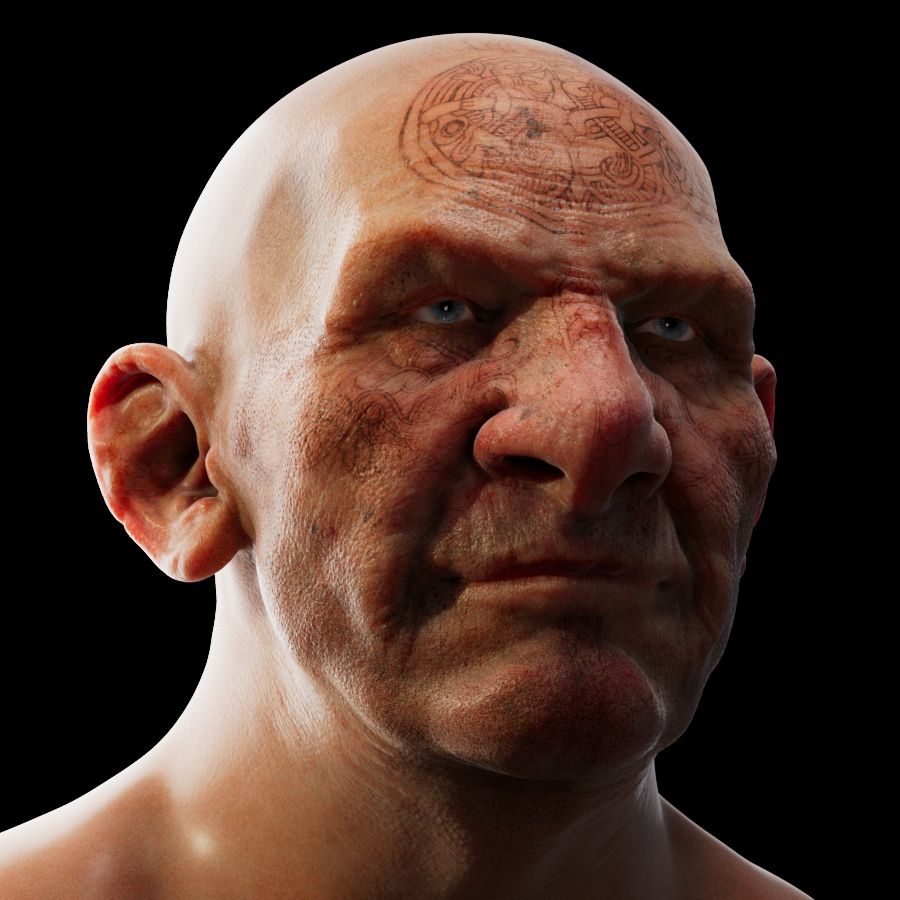 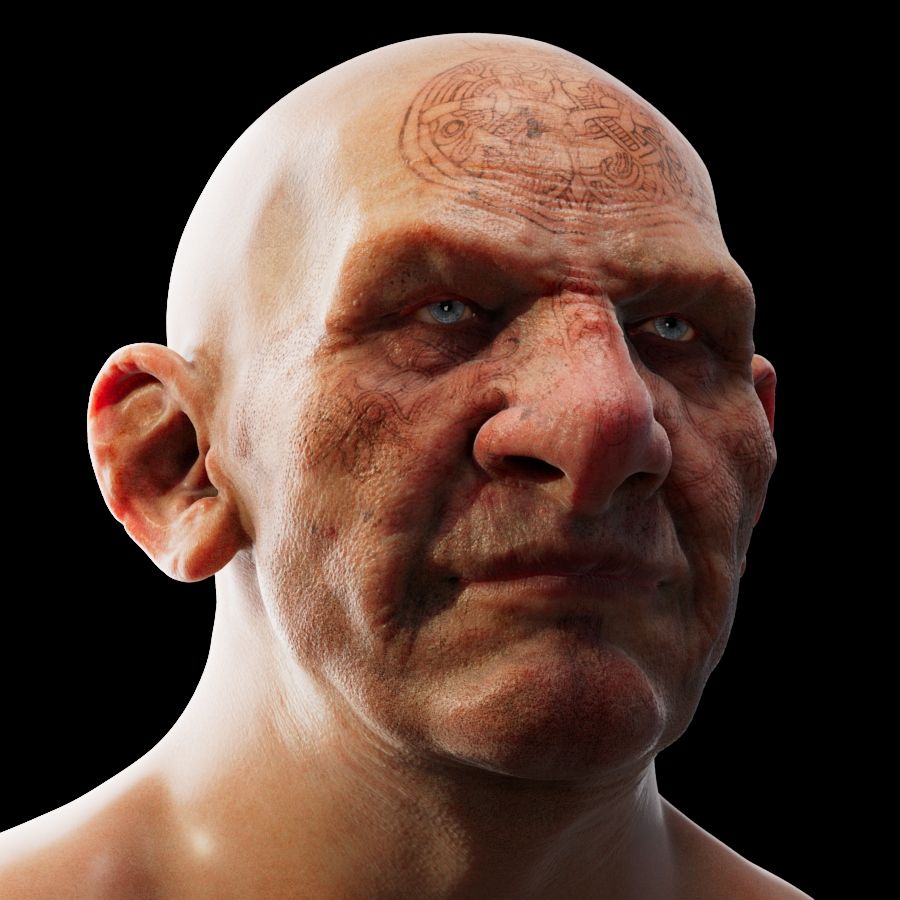 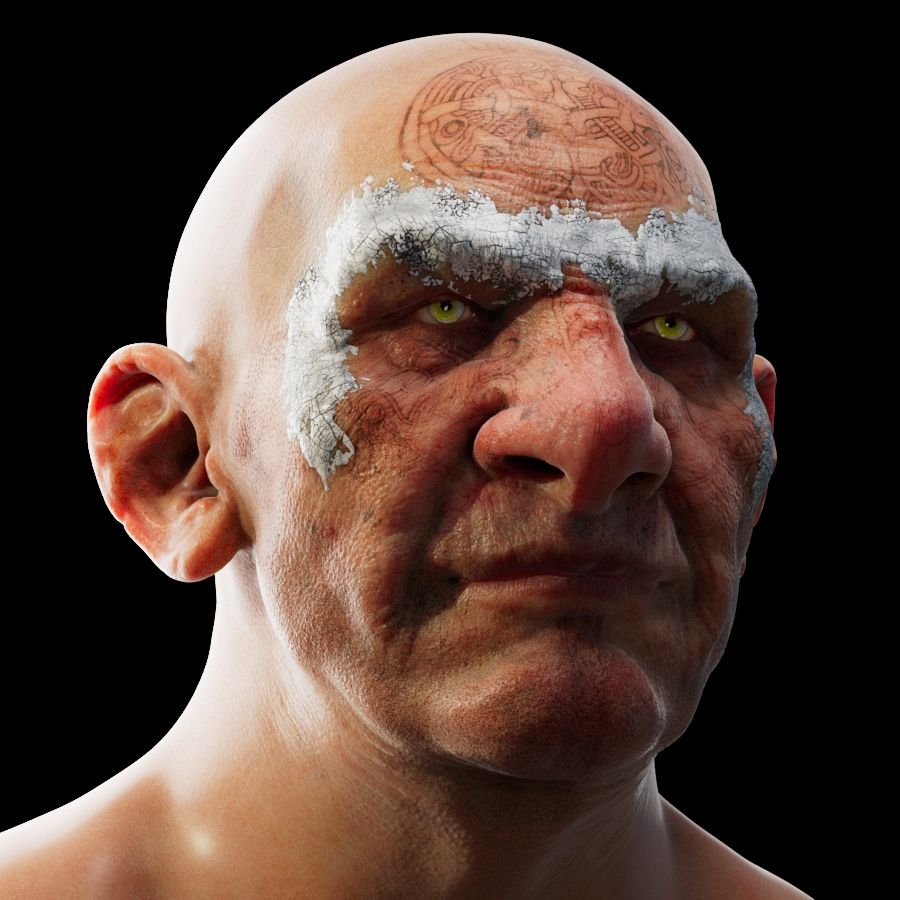 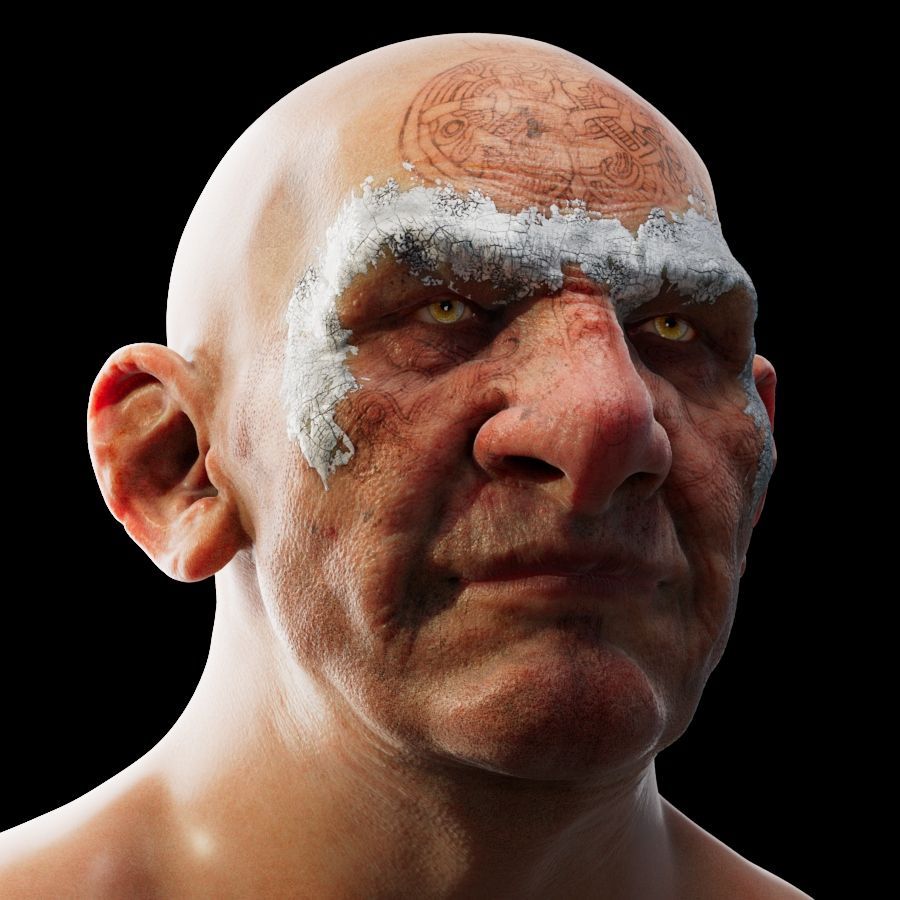 Shape and Form of the Sculpture

The head was thickened to the proportions of mythological dwarves. Dwarves tend to give off the look of thick skin which was very important for me to capture during the sculpting phase. In addition, I wanted to age the character to around 40 years or so. The pores were added by hand with GeometryHD in ZBrush and after I was satisfied with the look, I added the subtle deformations of the skin using TexturingXYZ displacement maps. The clothes were blocked out in Maya and imported into ZBrush for further refinements.

The monkey on his head was sculpted as an ecorche - inspired by Pygmy Marmosets and the Himalayan Yeti. I started off blocking out the skeleton using Dynamesh paying close attention to the joints being held by ligaments. Once the skeleton was defined, the muscles and cartilage were added to define the overall shape and form of the creature. These muscles were added using a sphere as a general blockout, stretched and conformed between the bones. Then the muscles were ZRemeshed for lower topology.

The last phase involved was shaping the skin. Using photo reference, I kept the form well defined and lean as per my research on hairless primates. I kept in mind where the fat pockets of the creature would be since the heavier the skin gets the more it tends to sag and droop down. I merged everything together and began creating a water tight seamless mesh that sat above the musculature. With the skin included, I detailed the mesh with wrinkles along the face, snout and jawline to capture enough shadows during lighting - once the studio setup in Maya had been created. 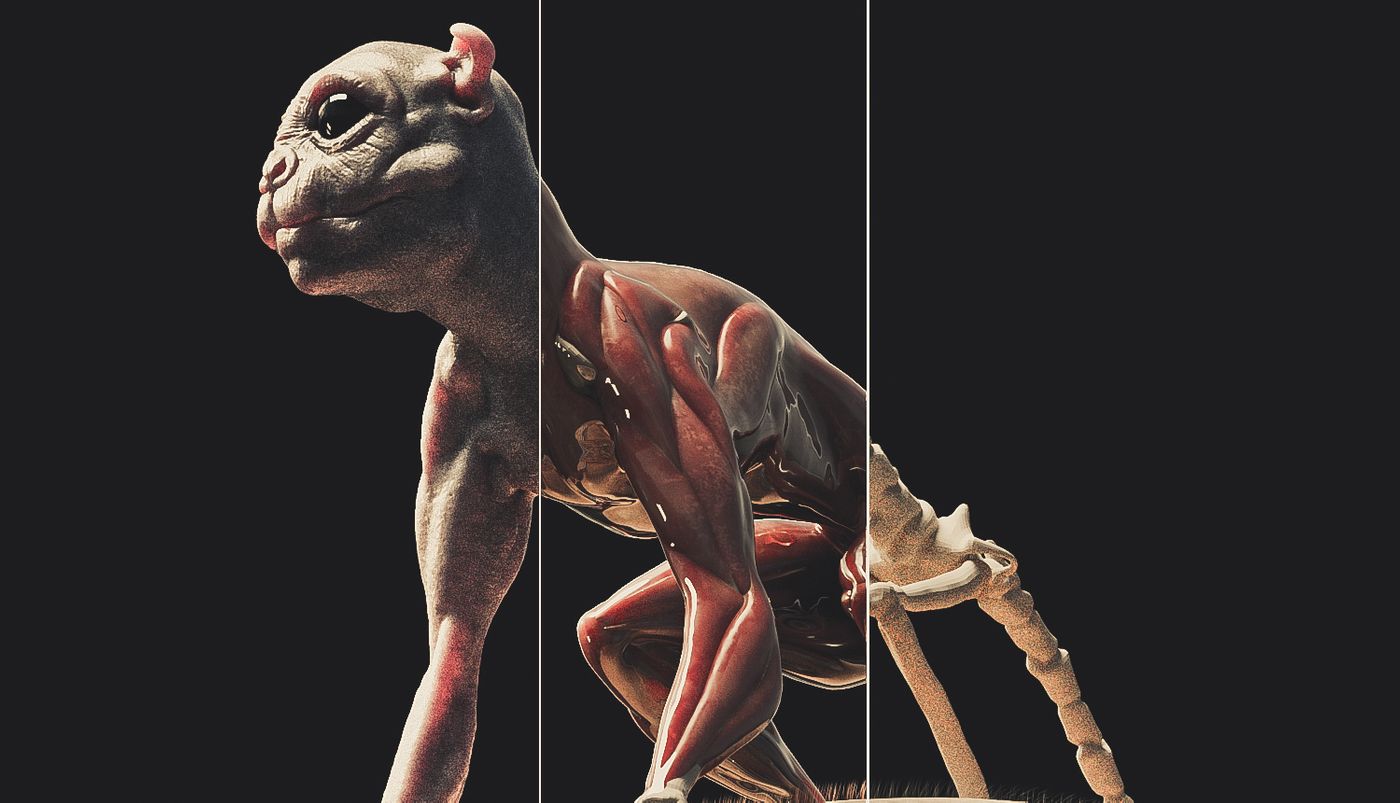 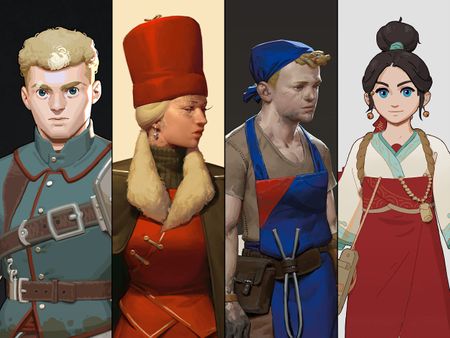