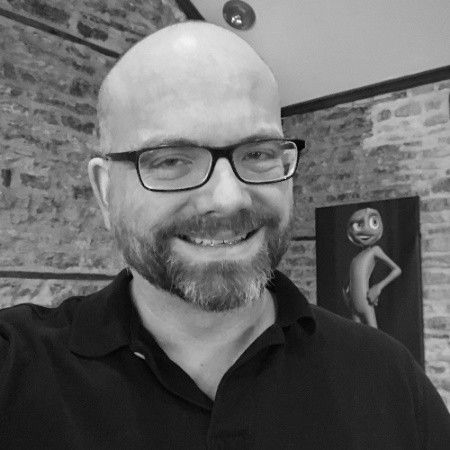 An Illinois native, self-taught designer and a passionate sci-fi film fan, Wes Burke is an entrepreneur with perseverance to push through the unknown.

After four years in the United States Coast Guard, Wes’ lifelong urge to create has taken him from his alma mater, The Illinois Art Institute in Schaumburg, into the game industry where he developed expertise as an environment artist. After more than a decade of working on household titles including Stranglehold or Tony Hawk Shred, Wes saw a need for solid digital art education and decided to utilize his knowledge of the creative industry launching CG Cookie, supporting independent artists and studios to become successful in what they do.

In nine years, the small side project has grown into a successful artist resource which now takes up most of Wes’ waking time. Fuelled by the obsession for improvement, Wes works with the team of CG Cookie to interact with thousands of artists around this little blue pixel.

An inaugural recipient of the Wade Ray Scholarship, 2015 AI-Schaumburg commencement speaker, Wes currently resides in Elburn, IL with his wife and 3 girls.